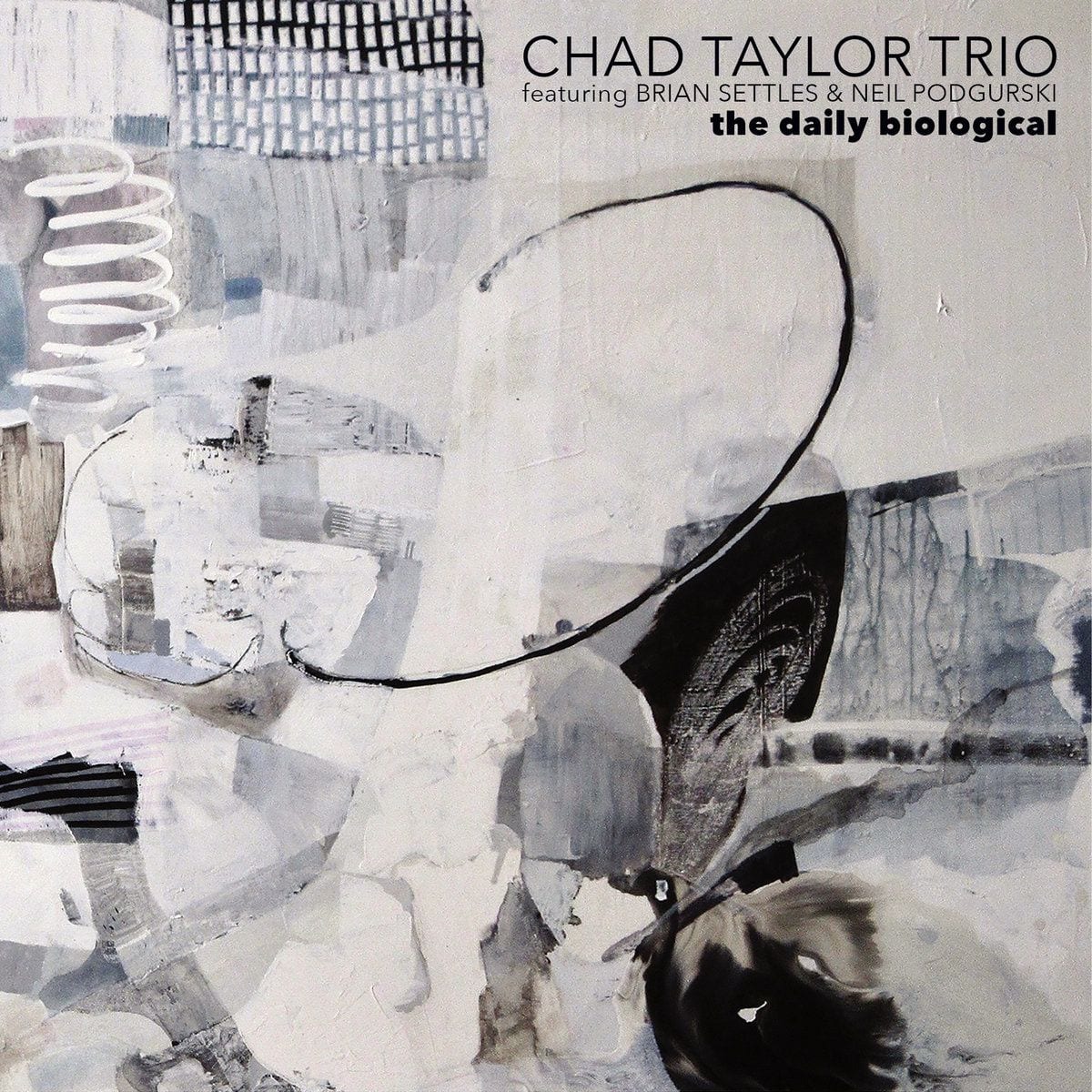 Sometimes it’s the little things—the small changes to routine that free you up to feel or do something fresh. In the case of Chad Taylor’s trio on The Daily Biological, there is no bass player. It’s just the leader’s drums, along with driving piano from Neil Podgurski and expressive saxophone from Brian Settles. Does the absence of a bass player—typically a staple of a jazz group like this—make the band sound so fresh? Is this hole in the sound of the band what gives them such flexibility and the ability to move in any direction? Is less, well, you know, more?

Who knows. I don’t want to suggest that bass players are hemming in the creativity of my favorite bands. But the outward flying energy of the Chad Taylor Trio on this recording is a fresh joy. The low tones are covered, sometimes by Taylor’s deeply melodic work on his toms and kick drum, sometimes by Podgurski’s left hand, usually by the joint action of the whole band, finding ways to let both performed notes and deliberate silences emerge as the “bottom” of a tune’s groove. The low reverberation throughout “Resistance” seems to be the piano, but the overtones are such that it seems mixed up with Taylor’s playing.

Settles plays a simple melody on repeat, becoming more of an accompanist than the “front” as Podgurski’s right hang clangs mad, dissonant chords and moves into a sprawling improvisation that bridges McCoy Tyner and Cecil Taylor. The leader is with him at every step, seeming to be just as active an improviser even as he keeps a rock-solid groove. Through it all, however, that bass function keeps bottoming out in harmonic power, a single note relieved by the gaps between its recurrence.

The absence of another instrument tracking the harmonic progress of the compositions also helps the band to play with fanciful freedom. On “Birds, Leaves, Wind, Trees”, the playful melody dances somewhat conventionally, but this gives way to a tenor sax solo accompanied only by drums and then a piano solo in the same format. Without a bass player hemming in the harmonies (or simply playing freely but still making harmonic choices), both Settles and Porgurski get to be improvisers at maximum latitude. Settles is more than capable of directing the harmonic traffic on his own, running fast arpeggiations as Taylor dishes and dallies using brushes in inspired dialogue. The piano enters sounding similar, ripping up and down in harmonic flutters that imply chords but never hew to a predetermined chord pattern. After the written melody returns for a minute, the full trio improvises freely, with piano and drums concluding things with a minute of a suddenly consonant section that sounds like a slice Keith Jarret-styled rag playing.

Full-on free improvising is not the rule on The Daily Biological, but the trio is good for another seven minutes of it at the start of “Between Sound and Silence”. The whispering theme that emerges from this exploration sounds like a benediction for the entire recording—a prayer and yet another portion that doesn’t miss the presence of a bass player, with the thrumming left hand of Porgurski again connecting with Taylor’s melodic, rolling toms, though very very quietly.

The more typical track is the opening tune, “The Shepherd”, which is also the recording’s most joyously programmed track. The piano plays a written, and syncopated line with a big silence in it as Settles spins the blues, and Taylor plays a slippery funk groove down the middle of it all. A brief written interlude of ballad-style counterpoint provides relief before Podgurski gets to improvise around the funk-bang written parts. “Prism” is tamer, but it’s also built on a popping rhythm track (Taylor, playing a modified Latin groove on rims and toms) that sits beneath an engaging piano part that leaps and lurches with fun. Podgurski improvises in jaunty fashion until Settles enters with a Rollins-y approach. The trio doesn’t play the theme together until the end.

There are countless other joys on the recording: a Settles unaccompanied section on “Swamp”; the motif-repeated theme of “Untethered”, which inspires some of the freest improvisings; the curling-you-in-a-ball fun of “Recife”‘s 13/8 theme, the first half of which lets Taylor play with abandon but still in the groove; Settles’s long solo on “Matape”, which finds him jousting with Taylor as if the ghosts of Coltrane and Elvin Jones had been hanging around the studio that day. On each of these performances, Chad Taylor is the instigator and glue, the propellor, and the rudder. It is not that he is placed high in the mix or that he overplays at all, just that he sits at the center of each performance, regulating its heat and shape. And he shapeshifts from tune to tune as necessary: from Elvin to Tony Williams, from Hamid Drake to Ed Blackwell. The collection of influences live inside an integrated drum style that is not imitative but, rather, evocative of the history of the instrument.

Taylor is, of course, associated with creative music from Chicago. Settles is a product of Washington, D.C.’s Ellington School of the Arts and then Howard University. Podgurski is from Philadelphia, a jazz town every bit as sharp as Detroit or New York or Houston. And somehow that is part of this trio too: a sense that the music is bigger than one city, one scene, one borough, one style. The band plays in a manner less “fussy” than what we often hear from the Brooklyn new jazz folks, but it isn’t without complexities, tricks up its sleeve, ways of battering down style boundaries.

The Daily Biological, stripped down to this nimble power trio, goes wherever it wants to go, wherever the music takes it. Fun but heady, it’s the kind of stuff to sustain you all day long.