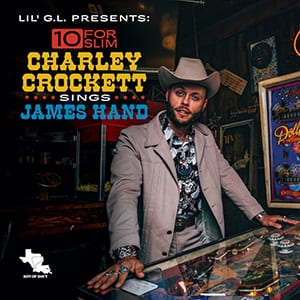 Those of us who have had open-heart surgery know that the muscular organ is more than just a piece of bloody equipment. Once the heart has been stopped and handled, something happens to a person’s brain, soul, and spirit. This isn’t easy to talk about. Becoming a member of the cardiac club offers precious insight into the dark side of life one may not want to acknowledge. While it may be easy for the inexperienced to have a mechanistic understanding of one’s body and imagine human beings to be machines made of meat and bone, the truth is much more unsettling. The human heart is much more than a representation but the real repository of a life core.

Charley Crockett’s musical career was going nowhere. He spent a decade on the streets of New York and the Big Apple as an unknown busker. Crockett’s health deteriorated to the point where he needed life-saving open-heart surgery. Since then he has become much more successful and has toured the US, UK, and Europe including gigs at Newport Folk and the Grand Ole Opry. He released two albums in 2020 to critical acclaim and reached the top five on both the Americana radio albums and singles charts. While open-heart surgery isn’t a recommended career movie, it clearly had an impact on Crockett’s art.

Crockett discovered the music of legendary Texas honky tonker James Hand and befriended the man before Hand’s unexpected death last June. The two were even scheduled to tour together. Crockett promised Hand he would record his songs. This new release, 10 For Slim – Charley Crockett Sings James Hand reveals the deep connection the two men had at the most fundamental level—the place where the heart lives. This does not mean the heart as a metaphor for love, but at the more primary source of human existence as that squishy button that controls one’s mind and lifeforce.

Hand’s songs come from a deep place. He wrote with a knowing authenticity about the human need for connection, how depression can conquer one’s best efforts to fight the blackness, and in the end nothing really matters more than an occasional friendly smile. Crockett selected songs like “Lesson in Depression”, “Mighty Lonesome Man”, and “Just a Heart” that use the honky tonk beat to show the connection between the tears in a dive bar. If you thought Hank Williams was lonesome, well, this makes him sound like Sunny Jim.

Crockett snaps off Hand’s lyrics in a knowing voice that seems almost happy. Things could not be worse. There’s solace in that. One might find oneself on the floor, but at least that offers a place to crawl. And who knows what may find there? And sooner or later one will reach a wall to climb or a door to hide behind.

While all ten tracks expose the bleakness inherent in our human fate, the final song, “Slim’s Lament” just might be the darkest song ever written. Hand recorded the song on his phone and sent it to Crockett a week before his passing. The singer asks death to help him with his pain. “I swear that I’ve tried everything but suicide / And every day is still the same.” Crockett croons the words as if acknowledging the facts of life are death, “I’m praying to God but I’m calling for you,” he tells death. Death is the more powerful agency.