From Chernobyl with Love: Reporting from the Ruins of the Soviet Union
Katya Cengel
Potomac / University of Nebraska Press

Katya Cengel, lecturer in Journalism at UC Berkley and author of Exiled: From the Killing Fields of Cambodia to California and Back (Potomac / University of Nebraska Press 2018) and Bluegrass Baseball: A Year in the Minor League Life (ibid, 2012), returns to her youth with memoir, From Chernobyl with Love (ibid, Nov 2019). Fresh out of University in 1997, she boarded a plane bound for Riga and was soon covering a wide variety of stories for The Baltic Times, ranging from Latvia’s various nationalist movements to the country’s Roma community. At this time, Latvia was only seven years into its independence, and still adjusting to the new rules of the game.

Once Cengel’s tenure in Latvia came to an end she took a job working for
The Kyiv Post in Ukraine, where most of her story takes place. In the introduction, Cengel tells us that her memoir will tell the story of her first love and her first marriage. She whets our appetite by proposing that it will be a memoir of “the window of time between propaganda and fake news”. That’s an evocative idea for those interested in the cultures of the vast region that once comprised the Soviet Union.

In practice, however, Cengel finds her personal life a useful mine of anecdotes. She skips over the redolent notion of a time between propaganda and fake news and leans much more heavily on personal recollections and observations. Cengel was in Ukraine for some key events in the country’s recent history. She was surely one of the first foreign journalists to be allowed back into the Chernobyl exclusion zone. She was on the ground for the murder of Georgian/Ukrainian anti-corruption journalist Georgiy Gongadze, and she was in the region for the first stirrings of what would become the Orange Revolution). However, the narrative drifts away from these events almost as soon as it alights upon them.

Cengel’s account of being hospitalized with pancreatitis, unable to communicate with medical staff, frightened and chronically homesick, is certainly emotionally affecting. While sentences like “The customer is always right was still a foreign concept”, and “In this consumer desert, there was an oasis of service: McDonald’s” are doubtless authentic, they tell us more about her difficulties with acculturation than they do about her host’s culture. 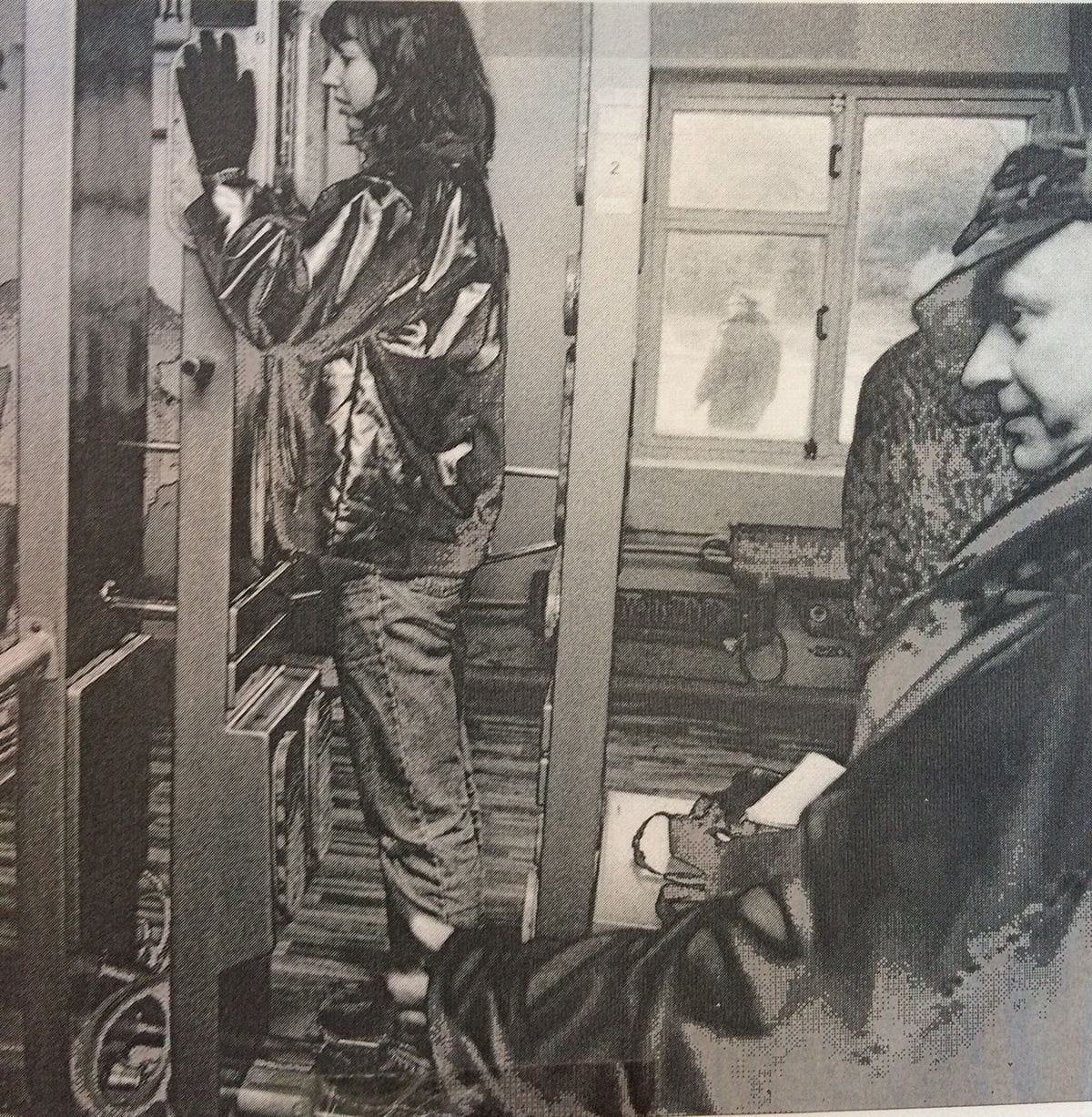 “This is me in 2000 checking my radiation levels after visiting the exclusion zone surrounding Chernobyl. If your levels are too high you can’t leave. I was on a press trip with other journalists and the image was taken by a kind Ukrainian photographer who sent it to me later and whose name is lost to memory.” (photo courtesy of University of Nebraska Press)

Furthermore, her characterization of her co-workers and interviewees often grates. For example, a colleague at The Baltic Times is “A tiny blonde spitfire of a Russian”, while another “could have been considered attractive in a rugged asshole kind of way.” When the head prosecutor for totalitarian crimes in Latvia is showing Cengel photos of said atrocities, her focus is on his “pudgy finger” rather than on the horrific contents of the photos. “Latvians”, we are also told, “were so behind on things that they still believed bands like Duran Duran and Depeche Mode were hip.”

More incriminatingly, however, is when Cengel feels that an elderly Jewish GULAG survivor is becoming a little too controlling about how his story is told. A tussle and then a chase ensues, her interlocutor “a little round rabbi in hot pursuit”. Nothing in the text suggests that she has reflected on the incident since it happened, or how describing a victim of totalitarian crimes in such a way might not sit well with readers in 2019.

There are memorable sketches of Cengel’s brief trips to Moldova and Transnistria, which are rare English-language accounts of those places during the window of time Cengel outlines. As when Cengel tells us about the news stories she covered, these accounts are over just as they were getting started. The reader is plunged back into the details of her personal life.

Anna Funder’s classic Stasiland: Stories from Behind the Berlin Wall (Granta, 2003) balances authorial anecdotes — staggering through Berlin with a hangover, insomniac viewings of late-night German TV, her mother’s tragic passing while the book was being researched — with the voices of her interlocutors, which are brought to the fore by her vivid prose. Miranda France’s Bad Times in Buenos Aires (Orion, 1998), while never missing the chance to grumble about the privations of life in that city, is packed with insights about the Peron era and the Dirty War. From Chernobyl With Love, by contrast, rarely foregrounds the voices of others, and rarely gives the reader insights into the cultures of Latvia and Ukraine.

Even Chernobyl, though it features prominently in the book’s title, is only briefly covered. The subtitle “reporting from the ruins of the Soviet Union” hints at an Owen Hatherley-esque travelogue with emphasis on the built environment. Hatherley’s most recent book, The Adventures of Owen Hatherley in the Post-Soviet Space (Repeater, 2018), opens by gently lampooning those who are “stalking the forbidden zones of the Soviet Empire.” Post-Soviet ruin porn has already gone from being a recognized genre to an ossified one. Cengel’s subtitle suggests that it may be time for a new paradigm; the current one may have exhausted its usefulness.

At one point, while on a date with Imants, a designer from The Baltic Times, Cengel comments: “I told him I would never watch Robert Redford’s The Horse Whisperer because it was almost three hours long and I didn’t watch movies over two hours.” Hopefully, she has reconsidered this rule in the intervening years. Otherwise she will have missed out on Sergei Loznitsa’s Donbass (2018), which runs at two hours and one minute and is a hard-hitting series of vignettes about the non-linear war that has been ravaging eastern Ukraine since 2014.

This brings us to the book’s conclusion. Cengel hasn’t returned to Ukraine since her tenure at The Kyiv Post, and so updates us from the US about the turbulent events that have occurred in the past decade and a half. Of course, a return would be dependent upon budget and schedule (this reviewer would be in Eastern Europe right now if he could swing it). Cengel says she prefers to remember the Ukraine of her youth. But there’s very little in the book’s brief passages about Euromaidan, the Ukranian revolution in 2014, and Donbass, that couldn’t also be gleaned from CNN or the BBC.

At the end of the book, Cengel opines:

“The Soviet leaders lied to their people. The people, in turn, have come to expect, and in some waysm accept deception. American politicians and the American people, in general, are not immune to falsifying the facts. But I think it is less expected or accepted. Americans tend to take things at face value. We take pride in being straightforward and straight-talking. Some accuse Americans of being naïve. We may be. That may be why the social media hoaxes Russia sends out about vaccines causing autism scare us. We still believe in truth.”

Though she goes on to add a caveat to this pablum by suggesting that Americans may only believe their truth, it is the previous paragraph that will stay with the reader after closing the book. Ultimately, From Chernobyl With Love is more illuminating of the American mindset than it is of Latvia and Ukraine, two nations for which the prefix “post-Soviet” tells only part of their complex stories.