It’s mid-December in San Francisco, and one of modern rock’s best new traditions continues as the Chris Robinson Brotherhood rolls into the Fillmore for a three-night stand to cap off their nationwide fall tour here for the third year in a row. The CRB is known for their vast rotating repertoire and exploratory jams, so no two shows are ever the same, and many fans on hand will be attending all three nights. A fair number have also caught the band earlier in the month at shows in Sonoma, San Diego, Los Angeles, Santa Cruz, Santa Barbara, or Tahoe.

The CRB cut their teeth as a live band touring clubs up and down the Golden State in 2011, and so California remains a “Promised Land” of sorts for the band and their legion of “CRBeings”. The quintet’s adventurous musical style inspires a devoted fan base who are psyched here since three straight nights at rock’s most legendary venue is perhaps the ultimate opportunity to experience the band in all their glory.

In a break from the past two years, these will also be the last CRB shows of the year with Robinson opting to play New Year’s Eve with his As the Crowe Flies project instead. The band comes strongly out of the gate on Friday night with a stellar sequence that launches with the Rolling Stones’ “Loving Cup” to open the show. That gets the audience into a festive mood right off the bat, with Robinson’s heartfelt vocals signaling he’s ready to get his mojo working. “High Is Not the Top” from 2017’s stellar Barefoot in the Head album follows, a “Cosmic California” groover with some of Robinson’s unique counterculture philosophizing. The CRB then takes fans straight to a sonic peak with “Poor Elijah/Tribute to Johnson”, an infectious blues rocker from Delaney and Bonnie that’s become one of the band’s top crowd pleasers.

Ace guitarist Neal Casal delivers some silky smooth slide work here to get the band’s bluesy vibe cranked up, while drummer Tony Leone, bassist Jeff Hill and keyboard wizard Adam MacDougall drive a big groove that has the Fillmore getting down on the good foot. “Star and Stone” takes the tempo down a bit but with a soulful Americana flavor, before building into an extended jam. This sensational four-song sequence sets the tone for a majestic weekend, with the CRB taking fans on an intoxicating jam-filled ride that feels like one long show.

Friday’s second set ups the ante with a “Let It Bleed” opener from the Stones to complement the first set’s “Loving Cup”. It’s become a staple cover for the CRB and with good reason — there’s no one besides Mick Jagger who can sing this classic tune with as much soul as Robinson does and Casal’s slide guitar takes the vibe to the next level (recalling Bonnie Raitt’s sit-in on the song with the Stones at their 2013 San Jose show). The band carries this formula into the anthemic “Rosalee”, a perennial jam vehicle featuring Casal’s hot slide work melding with MacDougall’s trippy keys for a rocking jam that ignites the Fillmore as Robinson asks, “Is the air getting thinner, are we getting high?” The raucous appreciation from the audience indicates elevation is being achieved. 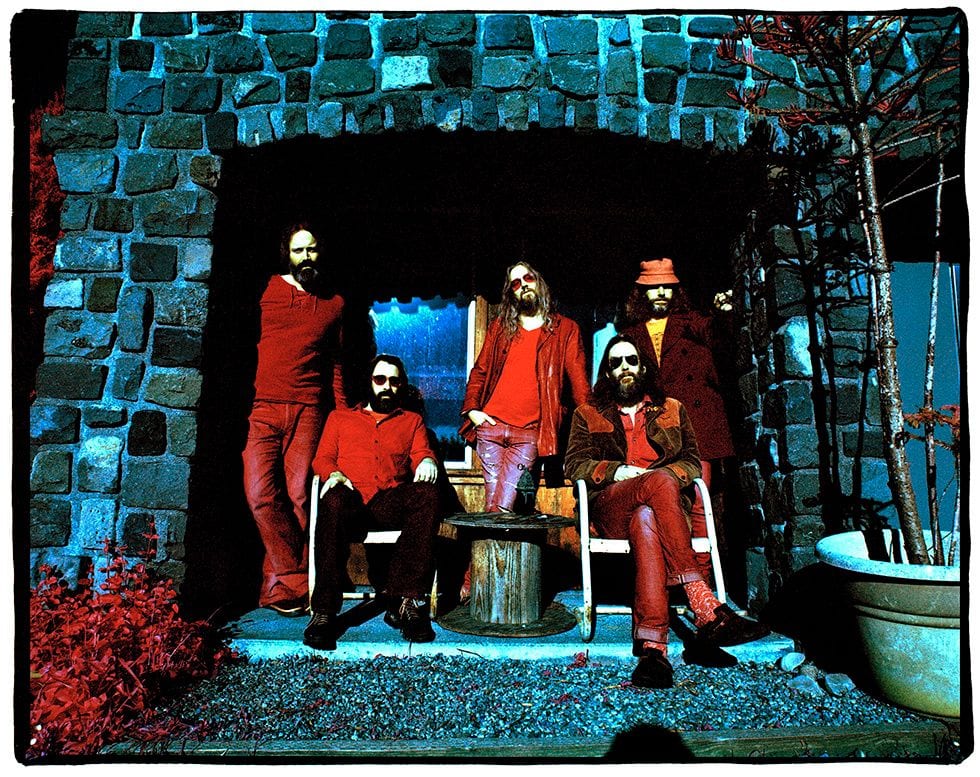 “Hark, the Herald Hermit Speaks” is a melodic gem from Barefoot in the Head that hits the spot here, with Robinson’s old soul mystical troubadour vibe coming through endearingly. “Tough Mama” delivers what feels like the deepest jam of the night, with the band taking the Bob Dylan tune on a funky Garcia-esque trip through the light fantastic as the Fillmore reaches peak psychedelia. “Behold the Seer” brings the second set to a rousing conclusion as Robinson leads the band through another winner from Barefoot in the Head. The vibrant tune melds funk, soul, blues and acid rock in the CRB’s patented fashion, with Robinson adding a soaring harmonica solo for an exclamation point.

The encore hits a Rolling Stones trifecta for the evening as the band brings on an entourage of friends to help out on a bustout of “Sing This All Together” from 1967’s Their Satanic Majesties Request, then follows with a heart-warming take on “Sweet Virginia” as Robinson sings “Thank you for your wine, California, Thank you for your sweet and bitter fruits…”

The festive vibe returns 24 hours later as the CRBeings file back into the Fillmore for a Saturday night rock ‘n’ roll party. The show doesn’t launch straight into the stratosphere like the previous night, but the vibe is alive as the band delivers a groovy set that’s a bit more laid back but still with plenty of rocking jams. Robinson implores the audience to “relax your mind” on “Oak Apple Day”, then helps leads a blues-powered jam on “New Cannonball Rag” as Casal lays down some hot leads. MacDougall follows with a swirly organ solo that seems to open a portal into the fourth dimension, as the CRB’s jammy “x-factor” coalesces.

“Meanwhile in the Gods” provides the set’s deepest jam, with a variety of twists and turns before giving way to the ever majestic “Tumbleweed in Eden” for a dazzling combo to take the congregation higher. A raucous rendition of “Hello L.A., Bye Bye Birmingham” brings the set to a satisfying conclusion with a retro rock barnburner that feels cut from a similar sonic tapestry as Chuck Berry’s “Promised Land”. The second set opener of Bobby Mitchell’s “Try Rock and Roll” pairs fittingly to get the show going again, a song where Robinson preaches rock and roll religion to the converted. The CRB’s “Blue Star Woman” seems to build off a similar sonic vibe before the song suddenly ignites into a smoking jam led by Casal’s stratospheric lead guitar.

Robinson oozes cosmic soul on a “One Hundred Days of Rain>Never Been to Spain” combo, leading to a bluesy bustout of John Lee Hooker’s “It Serves You Right to Suffer”. The CRB transmogrifies the tune to make it sound like they wrote it, something the band has developed a strong talent for. High energy workouts on “I Ain’t Hiding” and “Shore Power” help bring the set to a climactic conclusion, before another bustout encore wraps the show as the band debuts Free’s “Ride a Pony”. 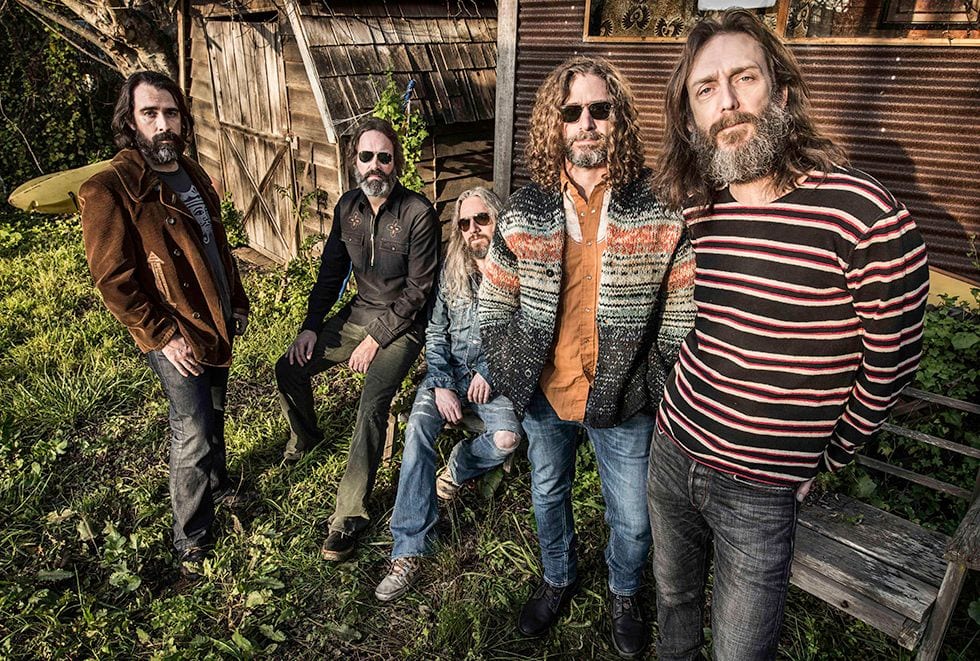 There’s still one more “Sunday Funday” show to go, and in what seems like a newer Fillmore tradition of the past decade, the Sunday show isn’t quite as well attended as the Friday and Saturday shows. That’s alright with the faithful on the dance floor though because it just means there’s a little more elbow room and that everyone present is in it to win it for the tour finale. The band doesn’t waste much time before getting back into the jams by taking “The Chauffer’s Daughter” for a ride, leading into an appropriate follow up with Slim Harpo’s “The Music’s Hot”. The R&B style tune is a fitting anthem here as the CRB has been lighting fires all weekend.

MacDougall has stepped up time and again throughout the weekend as the CRB’s secret weapon, acting as a tone scientist with his vast array of heady sounds to help boost songs to a higher level such as on the groovy “Good to Know” here. Robinson gets his mojo working again on the dynamic “Narcissus Soaking Wet”, a funky number with an edge where he sings of “natural magic mystic ways…” A pleasing ambient psychedelia develops in “Clear Blue Sky” to put the audience in a reverie before MacDougall comes in with piano lines that sounds reminiscent of outro jams from Black Crowes classics like “Wiser Time” and “Thorn in My Pride”.

The weekend’s final set opens in compelling zeitgeist fashion as Robinson croons Leon Russell’s “Stranger in a Strange Land” with lyrics that speak so pointedly to the insanity of the Trump presidency: “Well, I don’t exactly know, What’s going on in the world today, Don’t know what there is to say, About the way the people are treating each other, not like brothers, Leaders take us far away from ecology, With mythology and astrology, Has got some words to say, About the way we live today, Why can’t we learn to love each other, It’s time to turn a new face, To the whole worldwide human race, Stop the money chase, Lay back, relax, Get back on the human track, Stop racing toward oblivion, Oh, such a sad, sad state we’re in…”

That soon leads to the CRB’s classic “Vibration and Light Suite” for one of the weekend’s peak moments as the band leads the audience into a vortex of melodic bliss. Casal stars here with some sweet leads over a flowing groove from Leone and Hill, with MacDougall weaving his own swords of sound as the music plays the band. The stellar jam keeps on going for an extended sonic journey that makes it feel like there’s nowhere else to be this weekend except at rock ‘n’ roll’s ground zero here at the Fillmore. “Blonde Light of Day” emphasizes this feeling, a mystical melodic ballad where Robinson sings, “You must look deeper in order to see and further to truly be.” There are few other venues that can compare for such cosmic pondering, with the Fillmore’s timeless vibe always providing that sense of a chance to truly be.

An encore version of David Bowie’s “All the Madmen” provides a fitting bookend to the “Stranger in a Strange Land” set opener, before the band adds on an energetic rendition of “The Jean Genie” to end the stand on a more festive note. It’s been an uplifting, thought-provoking and very groovy weekend with the CRB. In a world gone mad, that’s only devolved further since Donald Trump came into power, the fact that counterculture rock ‘n’ roll continues to thrive at the Fillmore feels like a strong sign that the spirit of the 1960s lives on. Which means that the global movement for peace and harmony will continue as well.