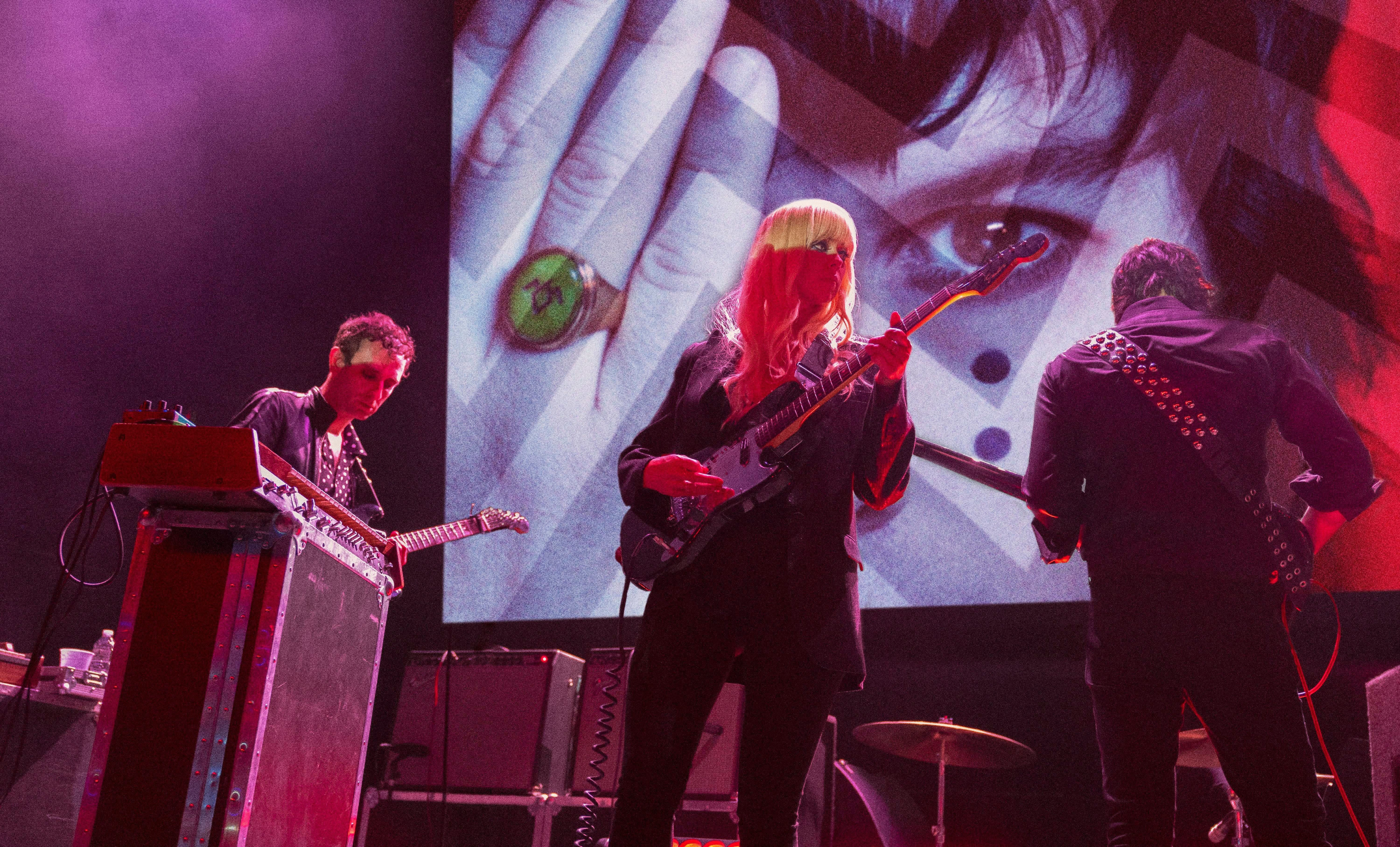 This was, in many ways, a very strange gig for Chromatics. Having just released a new record in Closer to Grey, the band instead opted to make the Double Exposure tour a trip down memory lane. So, instead, we get to witness a journey through Chromatics’ rich history and their favorite songs. Even though I very much like Closer to Grey, I can’t say that the idea behind Double Exposure was something anyone would pass on. So I ventured into one of the nicest venues in Manchester, the converted Methodist central hall that is known as Albert Hall.

This tour was an Italians Do It Better business, with a very new act opening the night in Double Mixte. The duo of producers Thomas Maan and Clara Apolit has the backing of Johnny Jewel, who produced their debut EP. In a fairly minimalistic setting, Maan and Apolit come to the stage, prepared to give us a tour through their noir-esque worldview. Sometimes, less is more, and Double Mixte appear to grasp that concept and all its implications. The waves of electronica fill the venue, providing the movement and progression, while the fleeting images that constantly alter in the screen behind them provide another layer to the overall atmosphere.

The duo’s music is immediate, but without being hard-hitting. Instead, what shines through their performance is this subtle romanticized essence of noir, with Apolit and Maan alternating on vocal duties, constructing different characters, sceneries, and stories for us to follow. In just under 25 minutes, they were able to project the richness that defines their debut EP, Romance Noire in the best possible way, before bidding us farewell. 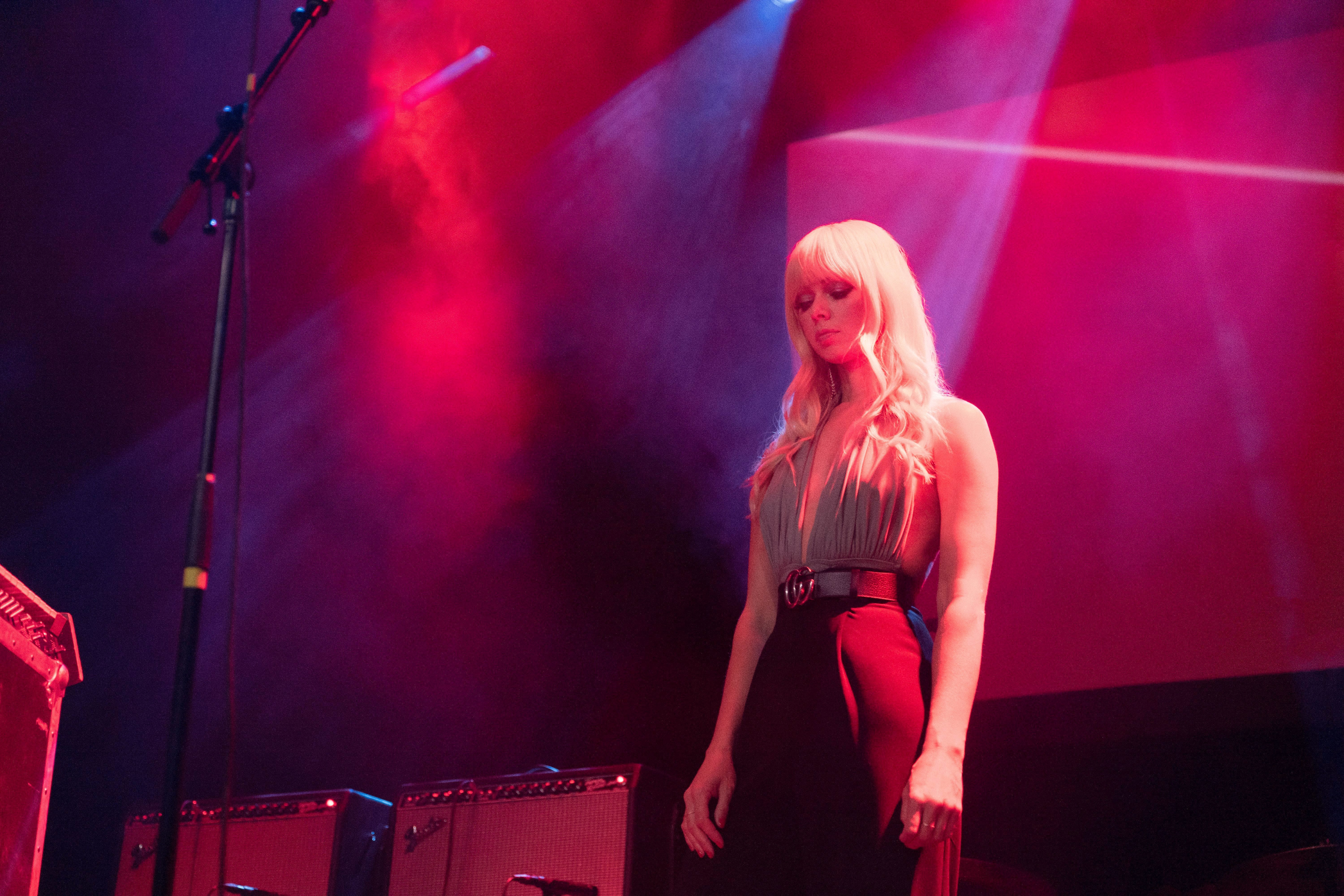 Next, it is Desire who take the stage, and that is when we get the first glimpse of Chromatics, with Johnny Jewel on the synthesizers and Nat Walker behind the drums. The setting suddenly changes from the fast-paced, romantic noir of Double Mixte to an overtly poppy synth-wave infused disco recital.

Desire has been flying under the radar for most of their career, sporadically putting out new music. But they always displayed an excellent grasp of the more obscure disco-inspired edge of electronica. Having released their debut record II back in 2009, the band has since produced a very interesting series of EPs in 2015’s Under the Spell and especially Tears from Heaven, released in 2018.

The setting on stage is spectacular with a look like someone that came out of the Roadhouse venue in Twin Peaks. Vocalist Megan Louise arrives at the stage in full swagger, with a cocktail in hand wishing everyone a great time, and for the following 30 minutes, that is what we got. And Desire traversed through it all, from their more extravagant and uplifting moments, down to the melancholy of their disco soul, even treating Manchester to a cover of New Order’s “Confusion” as the cherry on top.

The finale of Desire’s performance was also spectacular with a synthesizer battle of wills waging on. Supposedly the band has fully reunited and intend to release a new full-length in 2019. Well, that was the perfect appetizer. 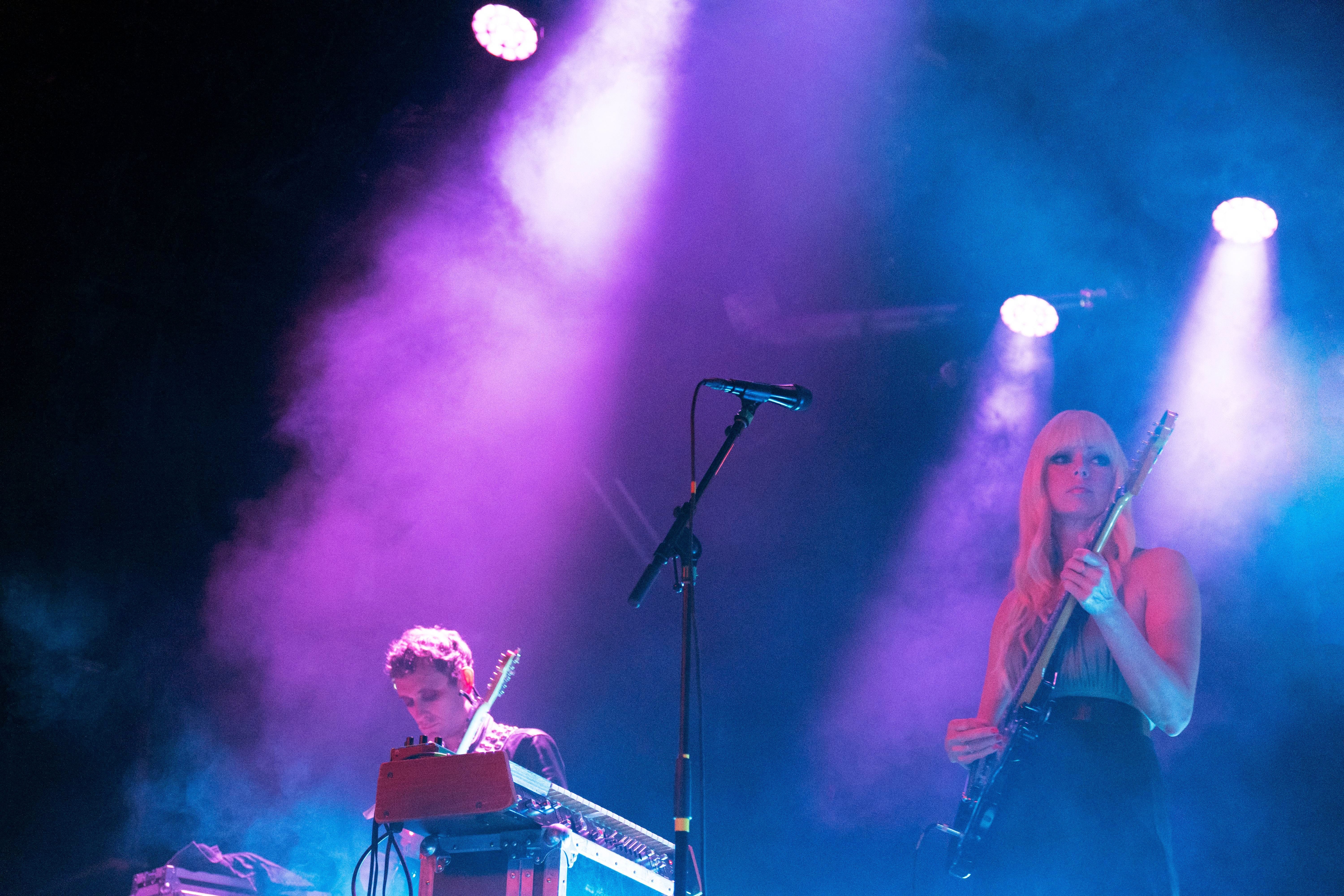 And finally, it is time. Chromatics, one of the pioneering acts of the past two decades, are about to take the stage with “Tick of the Clock”, causing the anticipation to rise. At last, the four members are on stage, and the show sets off in the most spectacular way possible. The delayed guitar melodies of “Lady” creep in, with the bouncy bassline and the fleeting effects soon joining. Eventually, Ruth Radelet’s voice echoes through the venue as she continuously sings, “I was always looking for a lady, but baby, you’re so far away”.

The dreamy essence of Kill For Love carries on immediately with the synth induced and equally otherworldly title track setting off. Johnny Jewel is switching between synthesizers and bass, while Nat Walker provides the repetitive electronically influenced backbone of the track. Images constantly switch in the background, some are from video clips of the band, some from Ryan Gosling’s directorial debut Lost River, but they all somehow come together to narrate the story of this iconoclastic act.

Since this is the Double Exposure tour, the band perform a further tour of their discography returning to their seminal Night Drive record. Through Italo-disco motifs and synthpop pathways, they unleash the title track in all its hazy majesty and the captivating “I Want Your Love”, as well as resuming the Kill For Love marathon with “Birds of Paradise” and “Back from the Grave”. 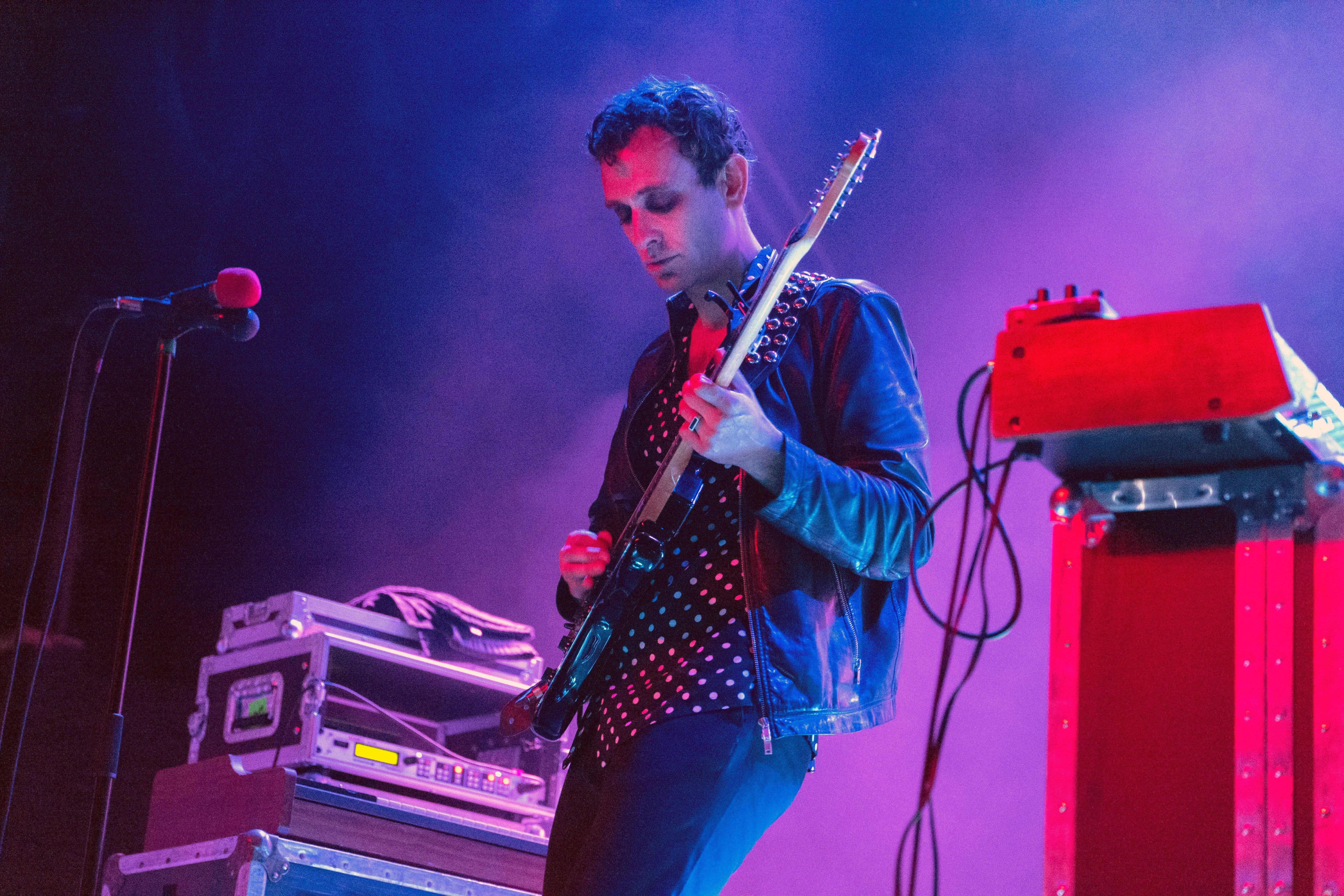 Another highlight is, of course, the moment Radelet introduces the next song, this time to be sung by guitarist Adam Miller. It is “These Streets Will Never Look the Same”, setting off again from a cinematic origin, and with Chromatics’ always elusive, ethereal touch. Miller’s processed vocals are haunting through the performance, with the overall energy at a high when the final part of the song kicks in.

The singles also get their fair share of the spotlight, with the electrifying “I Can Never Be Myself When You Are Around” exploding through its heavier distortion, while the stoic and intoxicating “Time Rider” induces a trance-like state over the performance. The red and white lightning show is the perfect accompaniment as this almost road movie-esque soundtrack unfolds through its minimal dance-informed roots, all the way to its fantastical hook chorus.

Keeping some of the best for last, the moving melodies of “Cherry” set upon us with the old-school bassline converging with the ethereal spirit of the ’80s and the disco ethos. And all this tour de force closes with one of the most spot-on covers ever produced in Neil Young’s “Into the Black” as the band bid everyone farewell. Thankfully it doesn’t last long, and now it is the time for the show’s second cover with Radelet appearing solo on stage, giving a delicate and graceful performance of Bruce Springsteen’s “I’m on Fire”.

The full band slowly return to pay homage to their darker and more obscure pop sense with “Shadow”, before the piercing leads of Kate Bush’s “Running Up That Hill” make an appearance with the entire venue erupting. And so is the nostalgia of Double Exposure set to a crumbling finale. It is the most fitting way to finish a seminal performance by one of the most important acts of this generation.