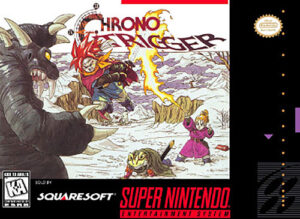 Video games have become a way to both escape and confront the traumatic experience created by the COVID-19 Pandemic. Studies have shown that video games can help players cope with traumatic events. By playing the 1995 video game Chrono Trigger during lockdown, I meditated on life and vied for agency while facing circumstances byond my control.

On 26 March 2020, I entered lockdown and joined millions of people around the world in social isolation in hopes of stopping the spread of COVID-19. The pandemic and the lockdowns that followed changed many people’s lives. While the pandemic disrupted daily routines across the world; for some, it became a historical demarcation, an apocalypse of sorts. Life would never be the same again.

During this unprecedented time, I desperately craved an escape from reality; the virus’ presence was felt by the constant sound of sirens and dreadful news. I sought escapism and something to occupy my time during the long hours of lockdown. While many played multiplayer online games and the new Animal Crossing to reconnect with others, I opted for a different embodiment of nostalgia and familiarity (though I did manage to play over 50 hours of Animal Crossing). My main means of escape during the pandemic was by playing Chrono Trigger, a 1995 Japanese video game whose narrative involves time travel and saving the world from apocalyptic destruction.

Chrono Trigger was published in the US in 1995 by the famed Japanese video game developer SquareSoft (now Square Enix). Created by a “dream team” of game designers and artists led by Sakaguchi Hironobu, the creator of the Final Fantasy series, Horii Yuji, the creator of the Dragon Quest Series, and Toriyama Akira of Dragon Ball fame. Chrono Trigger is at once a time capsule that has smart game design and state-of-the-art presentation from 1995 and remains a joy to play 26 years later.

The game’s soundtrack, by Mitsuda Yasonuri and Uematsu Nobou, provides immersive melancholoy. I’ve completed several plays of the game and I’m always delighted to hear the synth-heavy music each time. The games’ 16-bit pixel art is expressive. The environments are lush.

Chrono Trigger’s storytelling and narrative are heavily dependent on the player’s imagination. Its time travel narrative allows for expositional storytelling through vignettes that add depth to the world and develop its characters. This is most likely a touch of Horii Yuji, whose Dragon Quest series utilizes vignettes and story arcs as part of their narrative. Indeed, Chrono Trigger’s enduring legacy is a result of the game’s charm, nifty design, and good music.

The story is augmented when the player fills in the gaps of the game’s impressionistic presentation with their imagination. This is part of why Japanese role-playing games (JRPGs) from Chrono Trigger’s era produce acute nostalgia. The interpretation of what is presented and how it is remembered makes the experience of playing the game more personal.

Though the world in Chrono Trigger is doomed to be destroyed by Lavos, an intergalactic parasite that feeds on the energy of planets, there’s always hope and the means to manifest it is the game’s narrative. Chrono Trigger deals with heavy themes in its story in a lighthearted way. The game’s time travel mechanic and its narrative purpose allow the player to alter in-game historical events.

Video games can help players cope with traumatic events and can treat Post Traumatic Stress Disorder (PTSD), according to Kessler, Henrik, et al. and Hagenaars, Muriel A, et al.  I know this firsthand. Several years ago, I was involved in a serious car accident. As a result, I experienced regular involuntarily recurring visual memories of that traumatic experience: passengers crying, the twisted bodies of cars all around, and the wail of ambulance sirens.

Seeking relief from the flashbacks, I came upon one of these articles and decided to do as the patients in the research did, play the puzzle game Tetris for a few minutes a day. Tetris requires the player to concentrate their complete attention on the game. Video games, like Tetris, allow players through gameplay to have agency and exercise control.

I lacked control of when the involuntary memories would surface. The daily distraction and the demanding concentration required to play Tetris allowed me to slowly stop reliving the traumatic experience. When COVID-19 began spreading across the world, I felt just as helpless as after the traumatic car crash. The sound of ambulance sirens became constant again.

Role-playing games are more complex and offer more gameplay options for immersion than Tetris. I have fond memories as a child playing Chrono Trigger and wanted to relive that simpler time amidst the pandemic trauma. Experiencing an apocalypse and coping with it via a video game, where I have control over the apocalyptic outcome, was what I needed, and Chrono Trigger delivered.

Whilst playing Chrono Trigger the player travels through time and has agency over history and apocalypse. They can shape history by engaging with characters and face off against foes that would otherwise succeed if the players did not get involved to foil their plans. During the lockdown, I felt that time was out of my control. Time became ethereal yet consequential, a dangerous combination. It began to pass through my fingers as grains of sand from a broken hourglass. My power fantasy became the control of time.

Marston, Hannah R., and Rachel Kowert discuss the importance of video games as a mediated form of socialization, something much needed for many people during the pandemic. Young adults are among the most socially isolated demographic during the pandemic. There’s also the stress of financial uncertainty and concern for the safety of family and friends. One of my co-workers succumbed to COVID-19 less than two weeks into lockdown. A month later a close friend died from COVID-19. I found out months after the fact. Many family members contracted the virus, and some became very ill.

I couldn’t help them. This became daily life and being at home all the time left me, like many, feeling uneasy and stressed. Everything during the height of lockdown felt precarious and fleeting.

I turned to Chrono Trigger’s time travel, role-playing, and high stakes story to give me, the player, complete agency vis-à-vis the real world. Chrono Trigger utilizes time travel as a means of story-building and through the player partaking and interacting with the past, present, and future they build a deep understanding of the world, its customs, and history. According to William Helmke, researcher and doctoral candidate in communications and media at the University of Illinois Urbana-Champaign, the apocalypses presented in Chrono Trigger are “ultimately cyclical in nature.” They are part of “a longer history of life, death, and rebirth.”

Another aspect that draws me to Chrono Trigger is its nexus to anime and Japanese video games. Japanese media, unlike much of the media produced in the US, represents a safe zone for many people of color in America. In games, it creates a place where power and control are attainable yet relatable. This relationship with an apocalypse and the rebuilding that follows, Helmke says, are incorporated into the art that is produced in Japan, given its history of apocalyptic events from earthquakes to nuclear disasters. It’s no surprise that I turned to a game like Chrono Trigger for comfort during the pandemic. I’m not alone in looking to Japan in difficult times.

Playing Chrono Trigger during the pandemic made me realize just how high the stakes are in life. Helmke thinks “the biggest way that Chrono Trigger can speak to the world of today is as a reminder that there is a future beyond this-that this pseudo-apocalypse will come to a close and we will again thrive individually and socially.” The complexities of the world are made to be played with – interacted with. Video games like Chrono Trigger allow players to have agency and be the harbingers of change in the game’s world. This is a major incentive for players looking for a healthy distraction from their day-to-day reality during the pandemic.

While playing, I relaxed and focused on the manageable tasks at hand. I felt assured that, although I might not have control of all aspects of life, I still have some control. I still have some agency. Chrono Trigger is more than just escapism and Helmke agrees, “it forces us to think about the nature of time, the nature of life and death, and the reality that the actions we take matter, and can affect the future.” We might not have a say in what happens to us, but we do have a say in how we perceive what is happening and how we will deal with it.

In one of the side stories of Chrono Trigger, the player is tasked with saving one a central character’s relatives from an accident. In this current playthrough, I failed multiple times to input the correct button sequence. Through my experience, Lucca was literally going back in time each time I restarted the game in hopes that I would “save” her mother, Lara. One can always restart and at most the player will be penalized by being forced to repeat sections of the game. We have to work through it.