It’s a fall Friday during what has been a typically warm Indian summer as music fans flock to the Chapel in San Francisco’s Mission neighborhood for a much-anticipated show from Circles Around the Sun. The anticipation was supposed to be centered around today’s release (18 October) of the jam-rock quartet’s new EP, Circles Around the Sun Meets Joe Russo (a four-song set featuring the addition of guest drummer Joe Russo.) But a shocking twist of fate in late August changed the band’s timeline forever when guitarist Neal Casal decided he’d had enough of life on the third stone from the sun and ended his own at age 50.

The stunning news was a bitter pill to swallow for fans of the band and the jam-rock community at large, with Casal having just performed at the Lockn Festival in Virginia with both Circles Around the Sun and Oteil Burbridge & Friends. In his career, Casal had pulled off a rare feat of becoming universally well-liked as both a musician and a person in a music community that can be somewhat provincial. Many fans love the bands they love and frequently talk shit about bands they feel don’t measure up or are too derivative. Casal, however, had become known as a musician’s musician, and this reporter is hard-pressed ever to remember an instance of anyone putting him down.

After spending several years on lead guitar with Ryan Adams & the Cardinals, Casal took the same position with the Chris Robinson Brotherhood for a great run across the past decade that helped keep the psychedelic rock counterculture torch burning. He also became a semi-regular at Phil Lesh’s Terrapin Crossroads club in San Rafael, frequently performing with the Grateful Dead bassist and other local musicians. Casal then formed Circles Around the Sun as a side project in 2015 when he was asked by Justin Kreutzmann (filmmaker son of Grateful Dead drummer Bill Kreutzmann) to put together some music to be played during the intermissions of the Dead’s Fare Thee Well stadium shows in Santa Clara and Chicago. 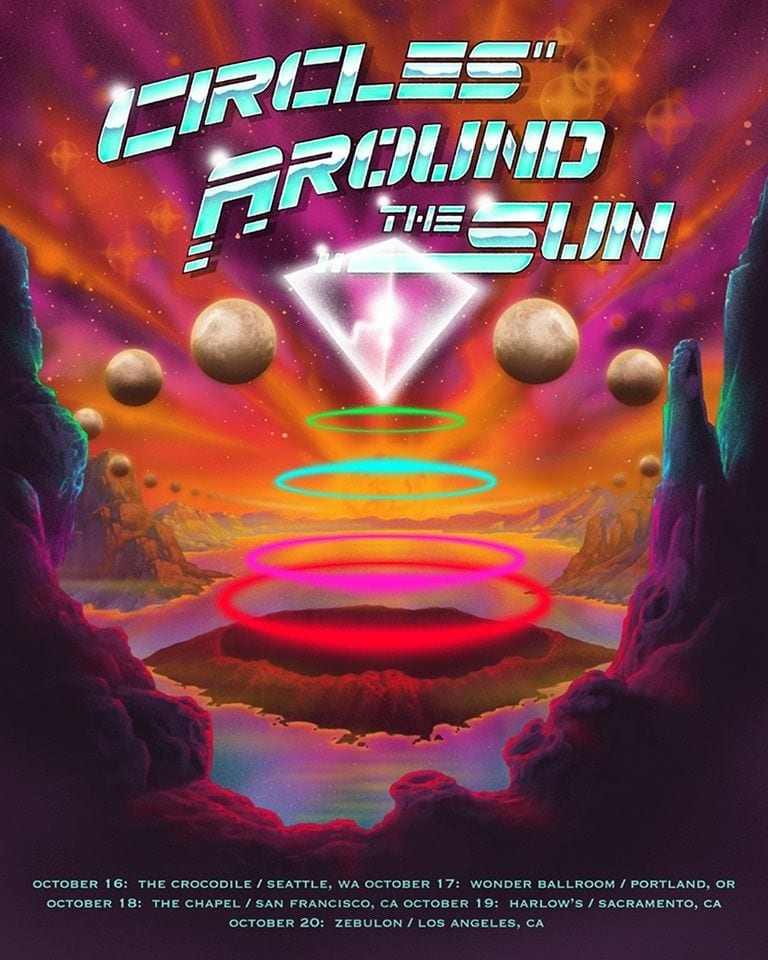 The instrumental music that was inspired by the Grateful Dead but which took on its own flavor became a surprise hit, leading Casal and his bandmates to evolve from a one-off studio project to a touring rock ‘n’ roll band. With Chris Robinson Brotherhood bandmate Adam MacDougall on keyboards, Dan Horne on bass, and Mark Levy on drums, the quartet quickly became a new favorite for many fans with energetic shows filled by dance-friendly grooves and soaring improvisation.

The future of Circles Around the Sun seemed to be in depressing doubt after Casal’s untimely departure from the planet until news filtered down that he’d left behind specific wishes for the band to carry on without him. Sorrow began to shift to inspiration when Circles Around the Sun announced that they would indeed carry on, revealing shortly after that that longtime jam-rock scene maker Eric Krasno would fill the guitar position at least for now. The new version of the band then made their debut at the marathon tribute show for Casal held at the Capitol Theater in Portchester, New York on September 25. Featuring a guest appearance from Joe Russo as well, the band threw down a pair of stellar jams where Krasno seemed to fit right in.

The pre-show vibe tonight at the Chapel is, therefore, a bittersweet one with melancholic mourning for Casal as fans filter in, yet tempered by the joy that the band is continuing and the show will go on. Circles Around the Sun waste no time getting right down to business as the quartet launches into a vibrant jam with “On My Mind” from their second album, 2018’s Let It Wander. MacDougall’s trippy synths conjure a cosmic vibe as he and the band join together to get the groovy jams flowing early and often. Levy and Horne are locked in from the get-go, while Krasno’s guitar lines fit right into the flow and never seem forced or off.

It quickly becomes clear that Krasno is a great choice to fill the bill, what with how he too has been a member of Phil Lesh & Friends and is well known for his improv skills. The band pushes the jam into triumphantly uplifting territory as it becomes clear that this will be a night for positive healing. “Gilbert’s Groove” keeps the dance party going as the sold-out crowd becomes an ecstatic congregation, moving and grooving with the band as if all are one. Circles Around the Sun have been known for their strong chemistry, and it’s plain to see that they’ve still got it going on as they jam out on a tune that features some of the funky vibes from the Dead’s “Shakedown Street”.

Horne introduces the next song as one of the new ones they figured out how to play, “When I was at Peace” from the new EP. This seems like a most fitting song title for the evening, and the quartet catches fire right off the bat, with Levy and Horne conjuring an upbeat groove for MacDougall and Krasno to weave melodies on top of. Levy and Horne have become one of the best rhythm sections in rock over the past few years, with Levy’s infectious enthusiasm powering every song and Horne throwing down dynamic grooves to keep the jams flowing. Looking ever wizardly, MacDougall opens a cosmic wormhole here with some trippy organ sounds that seem to provide a portal to another dimension as the band jams into a deeply groovy sonic landscape.

“Hallucinate a Solution” provides a dreamy breather of sorts that gives fans a chance to rest or grab another beer after what had been nearly an hour of high energy jams. The ambient jam eventually gives way to the energetic “Babyman”, a new tune that Horne says is named after a friend’s cat. The band has some cool new t-shirts featuring a logo with four black cats underneath a flying saucer from outer space, making this tune seem like a timely new theme song. The song shifts course midway through as MacDougall and Krasno drop out for a minute while Horne throws down a fresh bassline to steer the ship in a new direction. MacDougall then comes back in with some trippy synths, followed by Krasno adding some liquid lead lines, with the cosmic keys continuing to percolate for a stellar sonic journey through time and space. 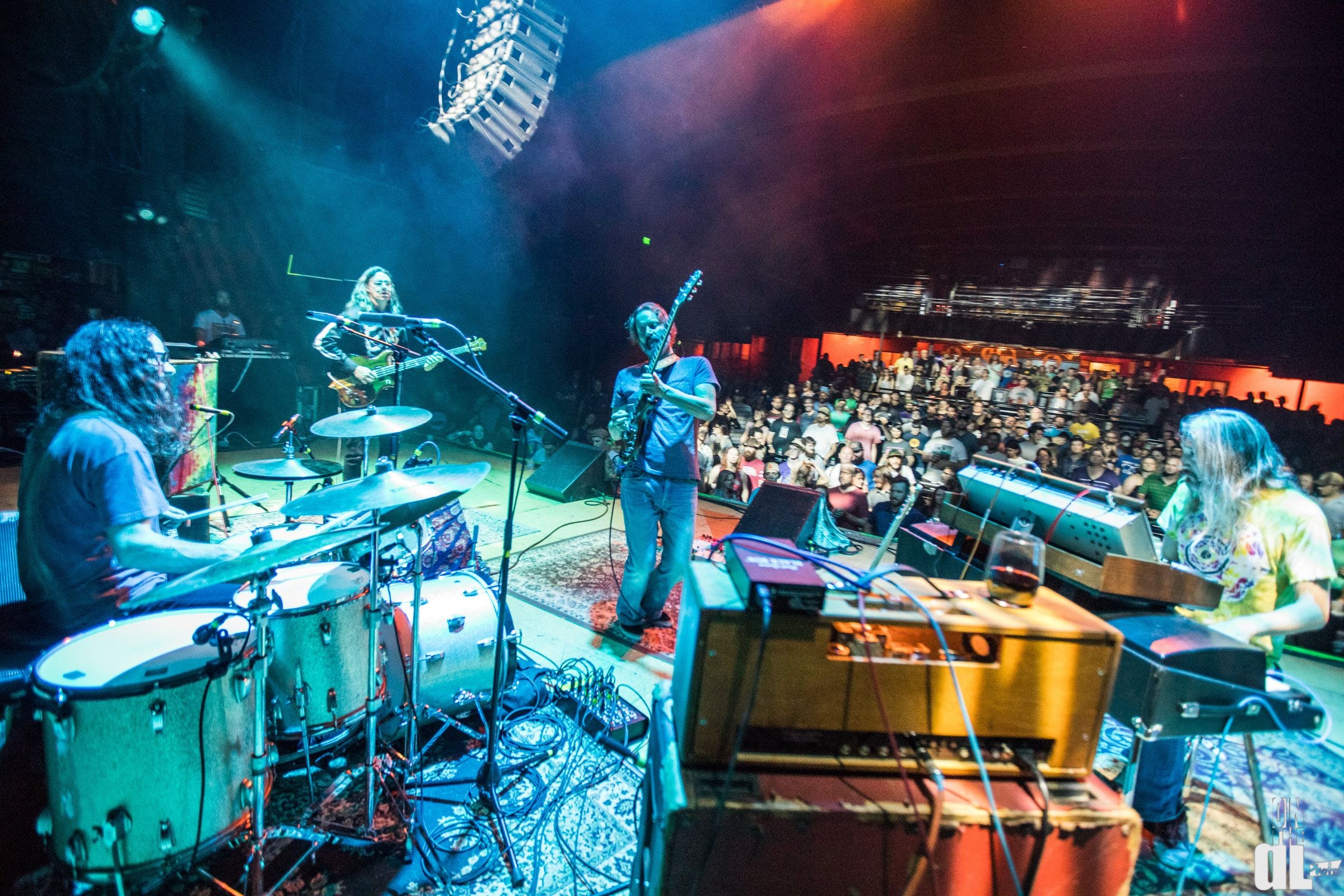 Krasno gets some wah-wah going on “Immovable Object” as the band patiently explores a mid-tempo groove, with he and MacDougall adding skillful layers of cosmic funk. The show then moves back into dance party mode with “Halicarnassus” as MacDougall once again plays the role of Gandalf, conjuring trippy sonic spells from his cosmic bag of tricks as Levy and Horne throw down another infectious groove. Levy has not stopped smiling all night, and it’s great to see the band putting out such a positive vibe for tonight’s mission of transcendence.

MacDougall and Casal had a special chemistry they’d developed as road warriors with the Chris Robinson Brotherhood. Still, there’s something about this music that seems to enable a pro like Krasno to step right in and keep that groovy vibe flowing. Time and again, Krasno’s guitar lines are right where they should be as the band jams out with the same uplifting sound they delivered in several previous visits to the Bay Area. This jam just keeps going deeper down the cosmic wormhole, with the quartet delivering the Jedi tone scientist sonic layering that Circles Around the Sun has become well known for as the audience revels in the ecstatic groove. The nearly two-hour set comes to a climactic conclusion with another groovy space jam on “Scarlotta’s Magnolias”, as the band rocks out over a feel-good groove that lifts the congregation yet again.

2019 has been a challenging year for MacDougall with his surprising departure from the Chris Robinson Brotherhood for reasons that remain nebulous from the public view, followed by Casal’s shocking departure from the planet. But tonight has shown that he and the remaining members of Circles Around the Sun retain the special chemistry they’d developed over the past few years with Casal, and Eric Krasno seems like an ideal replacement.

Throughout the night, there’s a sense that Casal’s spirit remains very much alive in the music, much like Jerry Garcia’s spirit often feels like it’s in the air when bands catch fire playing Grateful Dead music. Such is the tradition of great art, as described by the Kinks’ Ray Davies in his classic song “Celluloid Heroes”, where he sings of how heroes of the silver screen never really die since you can revisit them by watching their films. So too it is with music, and this seems like a fitting honor for Casal since Circles Around the Sun was originally inspired by the music of the Grateful Dead. In this sense, Neal Casal’s spirit lives on in the music of Circles Around the Sun and that music feels very much alive and well here at the Chapel.