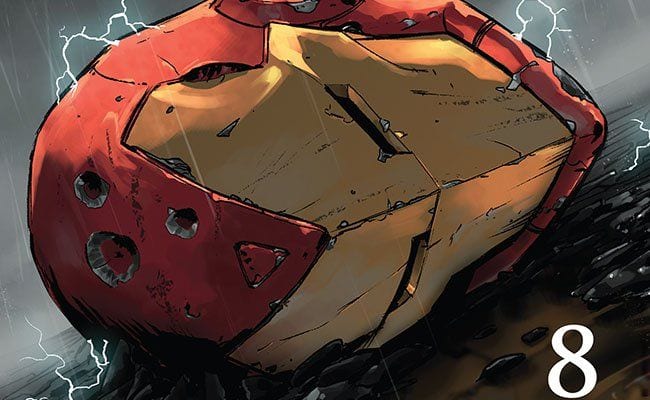 Every major sports dynasty in every meaningful sport learns at some point that a winning streak has to end. Whether it’s the Russians in the 1980 Winter Olympics, the undefeated New England Patriots in Super Bowl XLII, or the New York Yankees every five years or so, they come to realize that no winning streak can last forever. More often than not, learning that lesson is pretty painful.

In the context of Marvel Comics, Tony Stark is very much on par with the New York Yankees. He’s been managing a winning streak that dates back to the conclusion of the first Civil War back in 2005. Within the Marvel/Disney hierarchy, he’s right up there with princesses and talking animals regarding importance and prominence. He’s not just the character that revived Robert Downey Jr.’s career. He’s very much the catalyst for the modern Marvel universe, as it has manifested over the past decade.

With Civil War II, he faces the biggest threat to his losing streak to date. Once again, he finds himself leading a team of heroes against another team of heroes, caught up in a powerful philosophical struggle on how heroes should conduct themselves. This time, it’s not just Captain America or the American legal system he’s up against. He’s taking on Captain Marvel, who has a winning streak of her own, and the very forces that shape the future of the Marvel universe. Even with the star power of Robert Downey Jr., Tony Stark faces extreme odds.

He finally puts his vision and his winning streak on the line in Civil War II #8 for the final struggle. It has the fixings of a dramatic struggle, ripe with the same high emotions as Mark Millar’s memorable narrative in the first Civil War. Unfortunately, those high emotions that worked so well for Millar end up falling much flatter with Bendis.

That’s not to say that Civil War II #8 doesn’t deliver in terms of drama and high emotions. Those factors are definitely in place and they do give the story plenty of weight. However, the actual mechanics of the story and the way everything gets resolved just come off as rushed and contrived. Nobody will be gasping for air or picking their jaw up off the floor with the big climax of the story, here. The most anyone will probably do is shrug and sigh, but not necessarily in a bad way.

However, there are some powerful moments that play out here. These moments highlight the sheer strength and weight that Captain Marvel and Iron Man wield in the context of the current Marvel hierarchy. These are two of Marvel’s most popular characters fighting over a conflict that Bendis made sure was every bit as balanced as the one Mark Millar molded in the first Civil War. The clash never feels like a glorified street fight or something that can be written off as a product of mind control, clones, or Skrull agents.

Captain Marvel and Iron Man are fighting for the future of the Marvel universe and their place in it. Over the course of that fight, it’s clear that neither character harbors a seething hatred of the other. They don’t insult each other. They don’t engage in the kind of trash talk usually reserved for a rap battle. They carry themselves with the utmost conviction that they’re right. They both believe they are the New York Yankees on the cusp of another championship.

In the end, only one can win out. Eventually, one does win out, albeit in an outcome that feels somewhat hollow. After all the high emotions that helped make Civil War II so impactful, from the first battle against a rogue Celestial to the death of Bruce Banner, the result feels muted because the battle doesn’t resolve the main issue. In some respects, the issue resolves itself, which makes the conflict seem more trivial than it actually is.

Nothing that Captain Marvel and Iron Man do, either through fighting or through the hard choices they make, influences what happens to Ulysses. As the Inhuman who started this all, his role in the final conflict is surprisingly minimized, which undermines the narrative. It’s like Wolverine trying to win a fight without his claws. It’s possible, but it lacks that a certain touch that gives the conclusion its satisfying feel.

Absent this satisfaction, the conclusion in Civil War II feels so rushed. If the conflict does affect Ulysses, it’s an indirect influence at most and that influence is not really clear. Unlike the first Civil War, neither side gets a chance to really prove that their side was right. There’s no way to put into practice all these the passionate arguments that Captain Marvel and Iron Man make throughout the conflict. They still fight, but they don’t get to find out whose ideas win out.

Despite this lack of resolution, Civil War II still tries to establish a clear winner. It succeeds in this to some degree. It makes clear who comes out ahead and whose winning streak comes to an abrupt end. However, establishing the winner in the story doesn’t necessarily explain why they’re the winner in the first place. There’s an argument to be made that nobody really won Civil War II. In the end, one person is still standing. That’s more a technicality than a win, but it still counts. It’s like a championship game ending in a tie, but one side still gets to act like a winner.

On the whole, Brian Michael Bendis and Oliver Copiel succeed on numerous levels in making Civil War II the same high-stakes, high-drama conflict as its predecessor. The heavy emotions and painful losses are there. The impact of those losses are felt. Civil War II #8 does nothing to underscore those emotions or those losses. The characters never feel insincere. There’s never a sense that one of them could be a Skrull agent. The refinements are there. It’s the overall resolution that’s lacking.

One winning streak ends. Another winning streak continues. There are impacts, scars, and plenty of arguments to be had on message boards for years to come. In the grand scheme of things, Civil War II counts as a success. It’s just not the kind of success that will make anyone less tired of superheroes fighting each other.