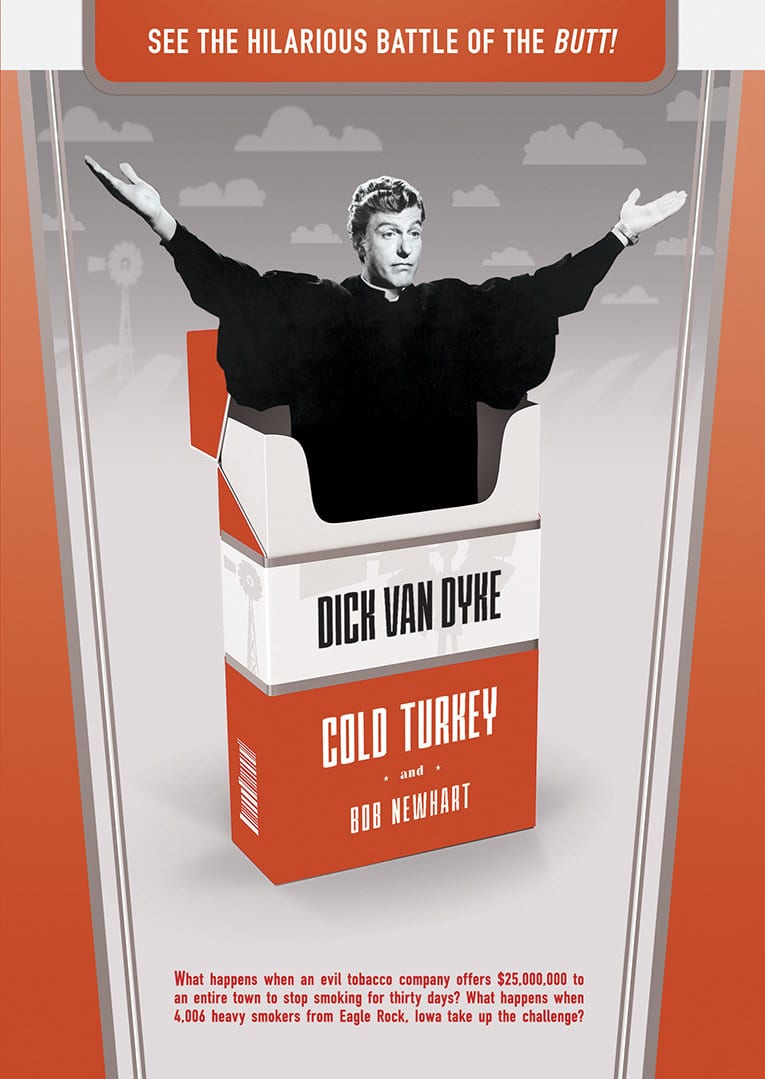 Cold Turkey (1971, now available on DVD at Olive Films) opens with the camera pulling back from a Confederate flag flapping atop the mansion of a wheelchaired old buzzard known as Hiram C. Grayson (Edward Everett Horton), founder of Valiant Tobacco Company. Drooling over his meals and never speaking a word, Grayson (a “son of the Confederate Gray”?) is talked into offering a prize of $25 million to any town in America that can give up smoking for 30 days. The talker is ad man Merwin Wren (Bob Newhart), whose expository speech draws parallels between Grayson’s tobacco fortune and dynamite-inventor Alfred Nobel.

After this prologue, which throws in a loud and furious board meeting of the tobacco execs, the credits greet us in a long, lanky two-and-a-half-minute tracking shot that lopes down a dusty unpaved street in the middle of nowhere, sweeping lazily left and right at signs indicating the depression of vacated businesses and a closed military base. Our protagonist is a shaggy mutt who ends the journey by lifting his leg, while Randy Newman‘s “He Gives Us All His Love” delivers a mournful gospel tune that dares us to find the irony or perhaps dares us not to find it.

The perfect balance of Newman’s song, one of his patented “simple” masterpieces, is such that its simplicity can be interpreted in opposing ways. It appears to subscribe to the consolatory notion of such gospel songs as “His Eye Is on the Sparrow”, which assure the listener that God sees everything and cares. The song doesn’t suggest that God does anything besides observe, and that this observation is the “love” that allows us to “talk to Him” and “lean on Him”. The onus for our behavior is thrown back on ourselves.

Thus, the song implies what may be a Deist conception shared by some of the Founding Fathers, that God has retreated from direct involvement in the universe, allowing us to act freely. It was a heresy. The same sentiment is expressed in Julie Gold‘s 1987 “From a Distance”, as performed by Nanci Griffith and Bette Midler.

This Deism, coming from a professed atheist songwriter, parallels the religious parable told by another famous atheist, Pier Paolo Pasolini (who made the greatest Passion movie, The Gospel According to St. Matthew, 1965), in the anthology film Love and Anger ( Carlo Lizzani, 1969). Pasolini’s devastating anecdote, or fable as a Wildean paradox, concerns a happy young Everyman who trips down the street, oblivious to the prayers of a God who demands to know why he never answers when God is addressing him constantly from all sides in many voices. God’s prayers remain unheard, and the man pays the penalty for his carefree deafness — God loses faith in him and strikes him down.

That 1969 film was made the same year that Norman Lear made Cold Turkey. Something seems to have been in the firmament reflecting or channeling a disgust at what humans make of the world, and Lear’s film too is an exercise in love and anger.

But we digress. After Newman’s song, the soundtrack of Cold Turkey invokes a more rafter-raising gospel chorus as the camera flies over the fictional Eagle Rock, Iowa. The town resembles a Hollywood backlot, perhaps left over from The Music Man but much more lived-in. In fact, the film was really shot in Iowa and its “good people” are thanked in the closing credits. 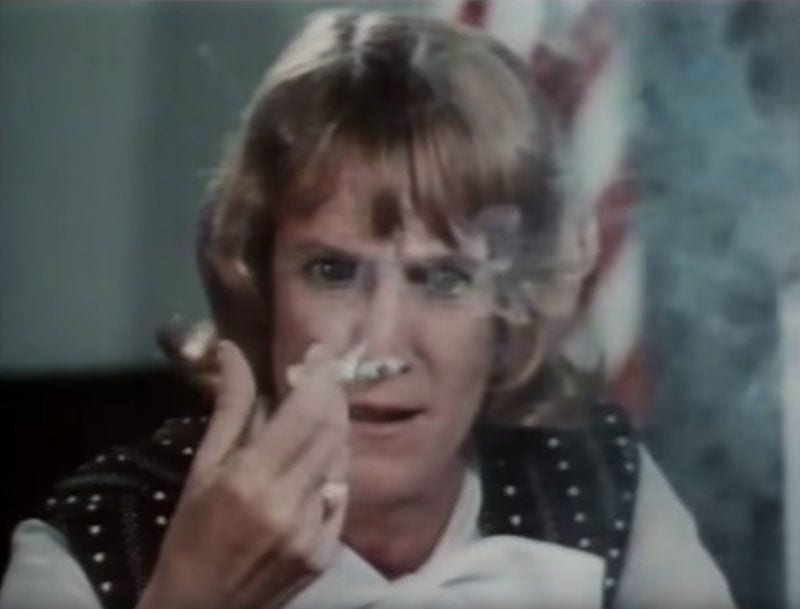 Despite this touch of ethnic color on the soundtrack, the 4,006 citizens of Eagle Rock don’t seem to include any who aren’t white. For all I know, this might reflect a geographical reality of some midwestern ’70s-era towns. However, writer-director-producer Lear pioneered the organization of American sitcoms around themes of race and class at this same historical moment, so I must conclude this his Eagle Rock reflects a choice to strip away all differences (except gender, which is touched on) in order to present a homogeneous “ideal” parody of small-town America that would befit a mean-minded TV skit.

The opening quickly establishes everyone’s craven motives. The mayor (Vincent Gardenia) is desperate to attract a lucrative military contract, but the military spokesman expects a major town overhaul. Reverend Clayton Brooks (Dick Van Dyke) is desperate for a transfer to a more bustling parish, but his bishop expects to see better results here first. Everybody else in town is just desperate. Perhaps Eagle Falls would have been a more on-target name, though Eagle Rock implies a dry dearth of options.

The laidback and generous mise-en-scène of the credit sequence, with its wandering dog, doesn’t reflect the rest of the film’s style, for practically the whole movie goes by in rapid montages. It moves so quickly, punctuated by TV newscasts in which Bob Elliott and Ray Goulding (billed as “Bob and Ray”) parody such broadcasters as Walter Cronkite and Chet Huntley, that perhaps we’re not meant to notice how this kaleidoscope of frantic, often farcical behavior is shallower than the humor on Lear’s TV shows.

Still, it’s more than a one-joke movie in which nicotine addicts find it hard to quit, even for the promise of wealth. To be sure, much footage is expended on sight gags about cravings, short tempers, sexual and other substitutions, and general public hysteria, none of which comes across exactly as brilliant wit, although it makes up for it by being loud while Newman’s score kicks into wacky carnival mode. After those initial fun and games, the town turns a corner and finds its profiteering soul as the media transforms it into a tourist attraction and a Mecca for flim-flam opportunists. 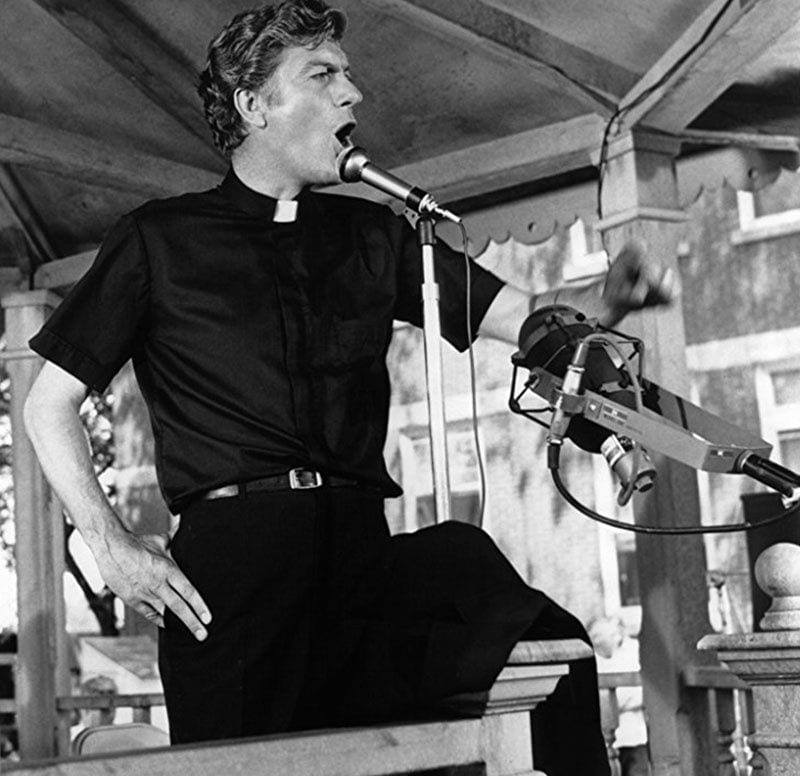 As Eagle Rock enjoys an absurdist boom, with its citizens marketing everything from Cutty Sark to Maytag and Maidenform (did this movie get financed by product placement?), hippie youth begin protesting that the town has sold out, while the nervous Mrs. Brooks (Pippa Scott) brings up the bit about gaining the world and losing your soul.

As a character, Rev. Brooks bends to the wishes of the scenes and the other characters in it. You could argue that real people are also inconsistent and situational, though he’s not conceived as a real person but as a figure in a screenplay. Generally, he’s ambitious, sanctimonious, and patronizing with his wife, yet he’s also the smartest and most dynamic character in town, and his ambiguous status as the movie’s moral center is reflected in his sudden burst of conscience at the town’s rollicking “anything for a buck” success. These qualms are quelled as quickly as they materialize.

With his job on the line, Wren makes desultory attempts to sabotage the town, including bringing in a squad of “Sons of the Confederacy” to monitor things. Once again, Grayson’s company is associated with Southern recidivism, probably because of the history of tobacco as a plantation crop. 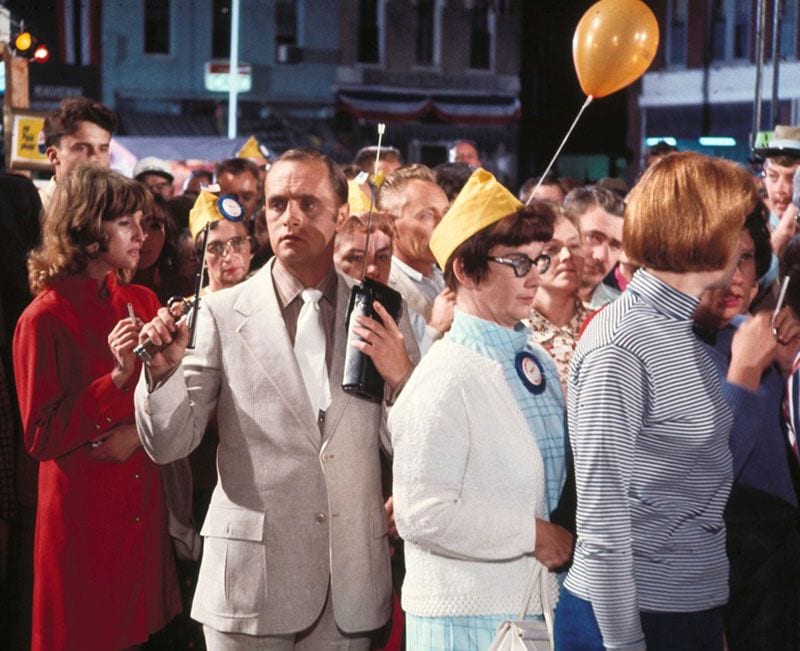 The town’s home-grown militia, run by a libertarian commie-hunting patriot (Graham Jarvis), wears armbands and confiscates everyone’s smokables. Such is the Christopher Mott Society, conceived as a parody of the John Birch Society. This is the sort of early ’70s comedy, discovering its own libertarian strain under the recently formed MPAA, which gets mileage out of having one Society member be an old lady who calls everything “bullshit”. Such humor goes hand-in-paw with the blunt vulgar symbolism of the dog’s lifted leg in the opening credits. (The Blu-ray carries a PG-13 rating, though at the time it was PG, or rather GP.)

In short, the humor is very basic and broad, and the length drawn-out. The film would benefit from judicious editing; actually, it could survive almost random lopping, and few would be the wiser.

One of the most significant names in the credits belongs to Robert Downey as a second unit director. This was the same year Downey’s Putney Swope satirized TV commercials while tying in Madison Avenue executives with racism and reactionary politics. The table of executives in Lear’s film could double for those at the beginning of Downey’s. If Downey’s vision of TV goes much further than Lear’s mild jibes at the public idolatry of godlike TV newsmen, there are similarities. The TCM website quotes Judith Crist’s review as claiming that Downey was responsible for the slapstick montages of citizens going through nicotine withdrawal. Elsie Downey, his then-wife, plays the nurse in the operating room scene.

The last ten minutes, as the film counts down to the stroke of the last midnight, are where the film shows its satirical teeth and that shaggy dog from the credits suddenly has real bite. The last images convey a brilliant, elegant visual metaphor that keys into the era’s concern for air pollution. Earth Day was first observed in 1970, the year after Lear made the film, so Lear not only keeps true to his topical antennae, he even dares to make Richard Nixon a character in the film. Is this the earliest film comedy to reference a sitting president so prominently?

Wikipedia suggests it could be the first American film to use flatulence in a gag, several years ahead of Mel Brooks’ Blazing Saddles (1974). Brooks and Lear were similar souls emerging from TV comedy, but Brooks soared into features while Lear concentrated on revolutionizing sitcoms. Perhaps this film’s moment of passing wind is as much a pop-culture benchmark as the sound of the flushing toilet on Lear’s All in the Family, which premiered in January 1971 — one month before this movie finally opened after having been shelved for two years by United Artists.

This was Lear’s only directorial feature, though he and production partner Bud Yorkin had previously made Divorce American Style (1967) with Van Dyke. Yorkin directed that one, and it would be a good candidate for Blu-ray.

Film reviewers generally liked Cold Turkey. If time has rendered it more a telling social artifact than a comedy classic, the ending remains powerful and thoughtful as a postscript to pandemonium. It might have done better at the box office if its release had been delayed another year or so, after both Lear and Stapleton had become household names by then. As it turned out, more people (including your reviewer) saw the film when it premiered on CBS in censored form. The raw language was gone, and that dog’s lifted leg had to be surmised rather than seen, for the opening credits cut jaggedly to the next scene.

This Blu-ray from Olive Films offers no extras, not even the trailer, which can be found on Youtube.