Colin Stetson‘s inimitable skills as a composer are once again on display via Color Out of Space, an H.P. Lovecraft adaptation starring Nicholas Cage. Even a cursory listen to the original motion picture soundtrack gives us a glimpse into the musician’s particular genius. It showcases his ability to create avant-garde compositions that are as enticing as they are unsettling (“West of Arkham”, “Contact”, “It Burns”) and sublime, classically-influenced compositions such as “The Gardners”. He can, of course, marry the most disparate elements of each sphere and does so frequently, not only amid this score but via his work on films such as Blue Caprice and Hereditary.

More than that, he has given the world of film scoring a new vocabulary. The form, which has long-relied on particular emotional tropes and frequently veers into clichés that at best, pass for sentimentality and, at worst, feel like hopeless pastiche, demanded someone such as Stetson to break this new ground. Over the last decade, he has been all-too-happy to answer the call.

Though he retains an identifiable voice across his larger body of work, he consistently delivers music that is particular to the film at hand. It is impossible to interchange Color Out of Space with his other scores the way that it may be possible to move another composer’s work from one mid-career film to another without creating considerable discord. Stetson himself would probably suggest that this comes down to his hands-on approach and determination that he interacts with the story personally.

Stetson’s voice remains particularly difficult to replicate in either world of rock music or film scoring because it remains restless, unbeholden to anything other than what comes from his mind, his lungs, his hands. Because he remains a seeker in the storied tradition of jazz and classical composers who can/couldn’t settle for anything but the boldest and bravest next move. A performer who has long existed outside the lines of conformity, Stetson doesn’t disappoint as a subject of conversation as he speaks with PopMatters from his Vermont home as he discusses the particulars of the Color Out of Space music or the larger view of his approach to the form.

You’ve done a number of soundtracks. Is the process is always the same?

Certain things are always the same in that I have a pretty organized way that I try to identify what it is that I’m tasked with. Each score is going to be a different character. It’s going to be a different approach in terms of what my job is and what role the music is playing. The first step is always to identify that and then figure out how I’m going to implement things in order to get that done. That’s when things diverge. It can be made more variable based on when I’m hired.

I had the script for Hereditary years before we started work on it. I knew about it and had an enormous amount of runway. There have been other things where I’ve been called in very last minute.

Have you ever been called in to replace an existing score?

Not to my knowledge. I’ve been called in to replace what others have played on records. I won’t elaborate on that. [laughs]

[laughs] Did you have a long runway with Color Out of Space?

I was brought in very, very close to lock picture. I had a couple of weeks to play out what were pretty involved sketches. Because the edit was underway, most of my initial sketches were integrated into the temp and so became the blueprint and skeleton for the resultant score.

Do you bring in pre-existing pieces of music or do you say, “No, since this is a film, I have to bring in something that’s directly inspired by it”?

No, I write for the film. With Color Out of Space , there is what I think can be construed as the main theme of the film. I wrote that before I got the job, but, in a roundabout way, it was written for the movie itself. I read about it one day while I was in the bathtub. I was responding to emails, and I ended up getting some link to something Variety saying that the project was underway. I immediately lost my mind and asked my agent to get me in touch with [people working on the film].

Later that day, I started playing and immediately found something that I thought was a really good line. I thought, “That’s a really good theme for that movie. I hope that I get it.” Then I did, and I used that part as the main hook. 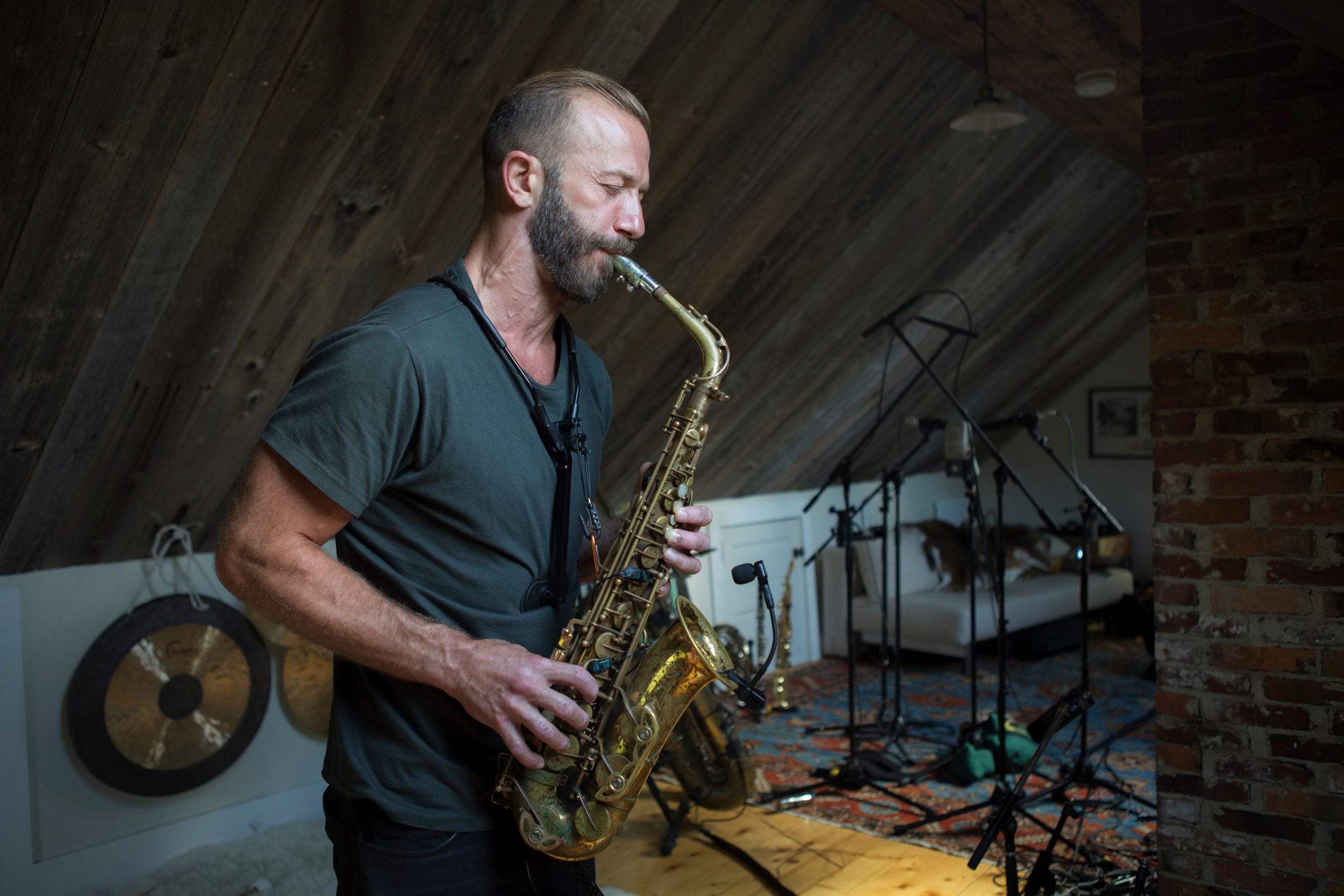 When we see a film, we hear music that might surface for a matter of seconds, but there’s probably a larger composition.

There are many different ways that film composers function. There are some who seem to write pieces of music and then have music editors and use those pieces or stems and fix them into the film. I don’t like doing that. I love the minutiae. I like everything to be stitched into a picture. I like the music to be an extension of what’s happening onscreen.

In Hereditary , there’s a scene where Peter is having a panic attack while he’s hanging out smoking dope with a couple of friends. He’s having these shudders. I automated this whole scene so that there were these surges of this cacophony that was in the background. It would surge with every flinch. It takes a while, but I would not want the audience to be consciously aware in the first viewing that that happened. It should be so seamless as to be an extension of the picture and should enhance what’s happening onscreen.

I tend to track almost exclusively to the finished cut.

I don’t think in those terms. In some sense, everything I do in every context is “getting away” with everything. If I thought about playing inside and outside of boundaries, I wouldn’t have a career. That feels like tradesmanship, like replication. That’s not what I’m optimized for. My favorite thing about scoring is that every time it’s a unique opportunity. I get to invent a new array of solutions with novelty and identity. I hope the music has not existed in the particular guise and aesthetic before that.

Do you want to do more scores in the future?

Scoring can be hugely time-consuming. I don’t subscribe to the whole workflow apparatus many people I know have done, which is to farm-out more of the job. They become overseers, managers of the process. I can’t really work that way. I still really enjoy it, and I try to make it so that it’s an integrated part of everything that I do. I still tour, though that touring is down to a minimum that is really manageable and actually really enjoyable. I look forward to tours rather than looking forward to being home. The past nine months have been spent on scoring, but now I’m catching up on a lot of other things. I try to have the workflow be integrated with solo performance and writing and recording, other projects with other musicians and scoring. People are still offering me jobs that I find compelling.

Were you a big film fan before you started scoring?

Yes. My music has always been based in imagery and narrative. The jump was not that much of a jump. Most people know Hereditary as the starting point, but I’d been doing scores for about ten years before that. But I was always oriented toward the medium.