The best and most vital documentary about front-line combat in the never-ending Wars on Terror since Sebastian Junger’s Restrepo (2010), Combat Obscura comes in swinging with something of a chip on its shoulder. It’s understandable. This is an era of flood-the-zone media coverage and ubiquitous cameras, when the Internet is crowded with American soldier-shot montages of combat footage—many set to songs like an aggro-Pentagon MTV offshoot.

Yet still, what we’ve seen of on-the-ground fighting in Iraq and Afghanistan since the post-9/11 wars, with US bombing of the Taliban in October 2001, has been remarkably sanitized. That’s not to say that home-front viewers have not been witness to some violently gruesome imagery (though almost never the kind of full-spectrum bloody barbarity that nightly news-viewers regularly saw during the Vietnam War). But with few exceptions, what has been said to the cameras has remained uniformly upbeat, on-mission, and “oorah“. Somehow, just about every soldier ever interviewed is doggedly optimistic and sound-bite-ready.

Combat Obscura, however, takes viewers behind the scrim, showing how combat-zone soldiers act when they think either nobody is watching, or the person watching is one of them. It’s a quick-moving documentary, just over an hour in length, with no running commentary or dramatic through-line. Viewers are dropped into scenes without any explanation or context, cutting from some Marines clowning for the camera (such as the joking “pre-firefight PT” in which four men do squats to “limber up” for facing the Taliban) to a cacophonous eruption of small-arms fire and mortars blasting away at an unseen enemy hidden behind some dusty ridge. It’s an approach which shears away meaning and context from the violence and suffering. At the same time, that chaotic viewpoint is probably not so different from how many of the Marines were viewing their forever war by this point.

Director Miles Lagoze was a Marine Corps cameraman assigned to capture front-line action in Helmand province in 2011–2012, two years after the surge, when President Obama was beginning the drawdown. On-screen credits announce Lagoze’s intent: “We filmed what they wanted, but then we kept shooting.” After coming back to the States and editing together some of his footage, he submitted it to the Marine Corps for review. They pushed back and tried to stop him from releasing it. The worry was most likely that it would show the Corps in a bad light. If so, they were not entirely wrong. 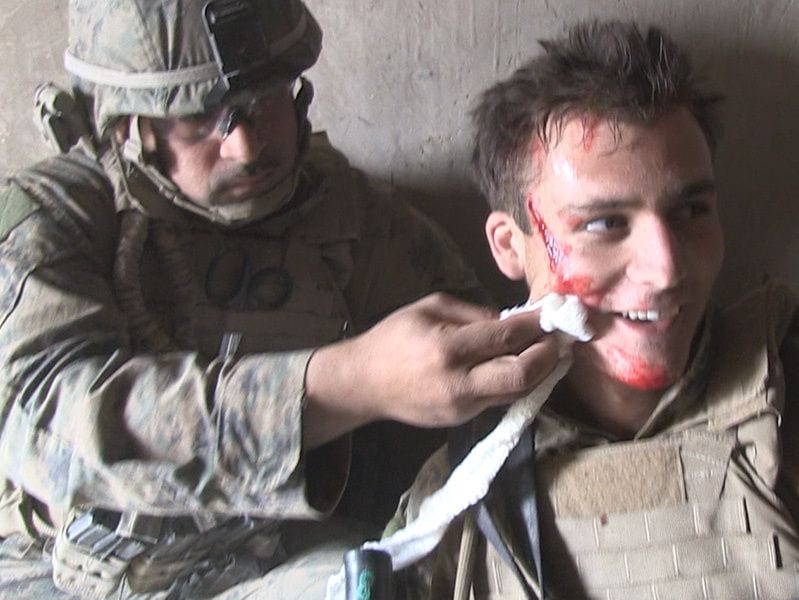 Some of the ugliest of what Lagoze captures is not going to surprise anybody who has been paying attention. There’s the soldier who gripes about how the Corps is filled with “the most fucked-up individuals” before concluding that they’re also “like me”. Another praises the rush he gets from a firefight (even “skydiving plus sex” doesn’t quite come close). After a bruising firefight that leaves a cameraman stunned (“I never thought they’d hit us in the compound”), another soldier takes some shrapnel to the head and has to be medevacked; the vacant look in his eyes is the sort of thing that would stop any number of excited teens from being too eager about experiencing the rush of combat. One soldier points his pistol at some children while screaming, “Where’s the fucking Taliban?” and another casually notes while inspecting a corpse, “Oh man, we killed a shopkeeper.” Frustration and fury are par for the course, with more than one Marine expressing a vague desire to just bomb the hell out of Afghanistan and leave.

The chaos, fury, cynicism, and overkill are to be expected in a grinding guerrilla conflict with unreliable allies against a tenacious and battle-hardened foe. Oddly, some of the more unexpected material comes in far less consequential moments. These mostly involve the Marines’ drug use. This should not be a surprise, given Afghanistan’s key position in the global narcotics trade. Nevertheless, it’s a subject that has almost never been raised on film. This makes the sight of Marines using a Pringles can as a bong fairly surprising, not to mention hearing one praise the country for being “a hash farm”. A scene where some stoned Marines get into a rock fight with some Afghan kids and gripe about a few faraway men being “Taliban as shit” raise obvious concerns about just how carefully they’re going to stick to their rules of engagement. It’s a thought that stays in your mind while watching them muse about hiding the shopkeeper’s corpse, and makes the scene where a squad trains their rifles on a man stripping his clothes (assumedly to prove he’s not Taliban) all the more anxiety-rattled.

Combat Obscura is simultaneously shocking and utterly familiar. War is by definition a cruel and confusing bafflement that encourages just about all the worst aspects of human behavior. As nation-shredding civil wars and brutal insurgencies keep rippling through the Middle East, it’s a worthy reminder that they will likely increasingly be fought by soldiers who may not know anymore what they are even fighting for, and could act accordingly.