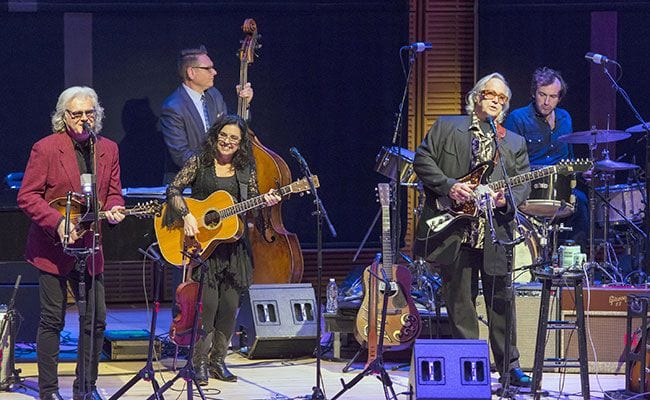 Ricky Skaggs, the white-haired country music veteran (a dozen number-one singles and 14 Grammys) joked that the only people onstage with him at Carnegie Hall under the age of 65 were the bass player, Mark Fain, and the drummer, Joachim Cooder. That wasn’t exactly true — his sister-in-law Cheryl White is a mere 60. But everyone else — Ry Cooder; Sharon White, Skaggs’ wife of 34 years; and Sharon and Cheryl’s father Buck — ranged from mid-60s to 85. The songs the newly-minted ensemble of Cooder-White-Skaggs played to a sold-out house also were pretty venerable, coming mainly from the ’40s and ’50s. The audience skewed late-middle age, too, and they were well-acquainted with the band’s repertoire, cheering in recognition whenever Skaggs announced a song, no matter how obscure.

The New York show was the brainchild of Roseanne Cash, whom Carnegie Hall asked to curate a series of concerts. She came up with four “Southern roots music” events, of which Cooder-White-Skaggs was the second. (The series opened with the Western swing band Time Jumpers; the soul group St. Paul and the Broken Bones and Cash herself will perform the third and final concerts.) When she got the commission, she recruited Cooder, who enlisted Skaggs and the other players. The band is a family affair– Skaggs, his wife, sister-in-law and father-in-law are country music eminences who’ve played together for decades; Cooder and his son Joachim have been collaborators since the ’90s, when they made the albums A Meeting by the River (1993) and Buena Vista Social Club (1997).

Roseanne Cash introduced the show on a somber note. Acknowledging the horrific terrorist attacks in France the previous night, she paid tribute to “our fellow concertgoers in Paris” and invoked “the healing power of music.” Over the next two hours, the band played a 22-song set that was evenly divided between secular and sacred material by the Louvin Brothers (“The Family Who Prays”), Hank Williams (“Mansion on the Hill”), Hank Snow (“A Fool Such As I”), Flatt and Scruggs (“Take Me in Your Lifeboat”); the Stanley Brothers (“Over in the Gloryland”), Kitty Wells (“Making Believe”) and the Delmore Brothers (“Pan-American Boogie”). Cash joined the band to sing one of her father Johnny Cash’s songs, “I Still Miss Someone”.

Even though the band is new — they’d never played together before their current tour — there were no tentative moments or rough spots, and the warm camaraderie among the members was obvious. Skaggs engaged in some good-natured teasing of Cooder, wondering how “a boy from Santa Monica ended up singing bass in a country band.” Besides superb playing, Cooder brought some welcome irreverence and oddball humor to the evening. Noting his attire — a double-breasted suit over an untucked black and white patterned shirt — the now-portly Cooder slyly observed, “I haven’t worn a coat onstage since 1988. This one was made in Nashville, so it’s lightweight.”

He explained how, as a third-grader, he first heard country music on KXLA, a local radio station “that played all these tunes”. He went on to praise You Tube as a source for material (he learned some of the evening’s numbers from the site) and as an online archive that spans “the black and white era, the color era, and today’s high-definition, which I mostly ignore”.

Cooder is an outspoken leftist, so it might seem surprising that he’d be so jazzed about playing country music and Southern white gospel, genres known for their social and political conservatism. White gospel, or at least the songs Cooder-White-Skaggs played, doesn’t share the passion for social justice, or the roof-raising emotional fervor, of black gospel. But Cooder’s involvement in this new project is consistent with his democratic love of American vernacular music in all its forms, whether the blues, Appalachian folk, gospel, rock ‘n’ roll, Tex-Mex, or mariachi.

There was much to love about the show: the pleasures of the smooth four-part harmonies served up by Cooder, Sharon and Cheryl White, and Skaggs; Buck White’s lovely, fluid piano solos; Cooder’s and Skaggs’ guitar and mandolin duets. The music often was beautiful, and always beautifully played. But it rarely broke a sweat. There were no songs about boozing, brawling, or cheating, and this writer wished for more of the rowdy side of country. The set was a little too foursquare, and the piety sometimes felt oppressive. (But I’m a left-wing, atheistic gay guy from New York City, so take that into account.)

Things got livelier whenever Cooder picked up an electric guitar; his solos were focused, soulful, and exciting. On “Hold Whatcha Got” — an up-tempo number that followed “Soul of a Man”, a Ricky Skaggs tune Cooder called “crepuscular and diaphanous” — his slide playing keened like a pedal steel guitar. He enhanced a mostly instrumental version of “Tennessee Waltz” with some shimmering tremolo effects. Introducing “Pan American Boogie”, Sharon White observed, “Every good country set needs a train song.” Cooder and Skaggs, on mandolins, gave the number all the locomotion it needed.

The first encore, “You Must Unload”, was the closest the show came to a political statement. Written by Blind Alfred Reed, a Virginia singer-songwriter who died in 1956, it scolds “you money-loving Christians” who “refuse to pay your share”. Cooder sang it with a blend of earnestness and humor, extending his arms wide like a preacher, and then, on electric guitar, he played his most passionate and riveting solo of the evening.