Copyright Criminals, a short documentary by Benjamin Franzen, starts exactly as you think a film detailing the practice of music sampling should: with a dictionary definition. “To use a segment of another’s musical recording as part of one’s own recording.” It spends the rest of its 54-minutes jumping between talking heads defining and arguing for or against sampling use, archival footage of concerts, both primary and contemporary, and highlighting some noteworthy examples. Its footage of various interviews of recognizable people such as Aesop Rock and Steve Albini looks cheaply produced, with a low-quality digital video, the heads framed in myriad close-ups in a way that may seem interesting for a first film. These sources and subjects provide a kind of oral history from people who were there as well as music critics, professors, and historians. Its roster boasts names like De La Soul, Chuck D, George Clinton, Sage Francis, Saul Williams, and Prefuse 73.

Jeff Chang, the founder of SoleSides Records, opines: “We live in a remix culture now and the laws have to change to help that culture do what it has to do.” This is even truer now than it was when this interview took place in the late oughts. In a culture where Youtube and Soundcloud are thriving platforms for music and video artists, and Spielberg’s Ready Player One dominates the box office, remixing and sampling seem more valid than ever. But at the time, as Franzen portrays in Copyright Criminals, there was a concerted effort to crack down on hip-hop artists sampling tracks owned by other sources. It evokes the Napster crackdown of the late ’90s with how badly its litigation impacted the community.

Some of the most valuable soundbites Franzen gets on tape are of these music critics and artists validating the practice of sampling as a black art form. It prompted the question in my mind: why would the generation that covered Bob Dylan over and over get so bent out of shape of having seconds of audio copied and pasted in a new way in a rap song? If it had been a new, interesting form of psychedelic new wave done by white UK artists that were lifting three seconds here and there, would such artists have been flattered and their sampling work deemed “innovative and daring”? 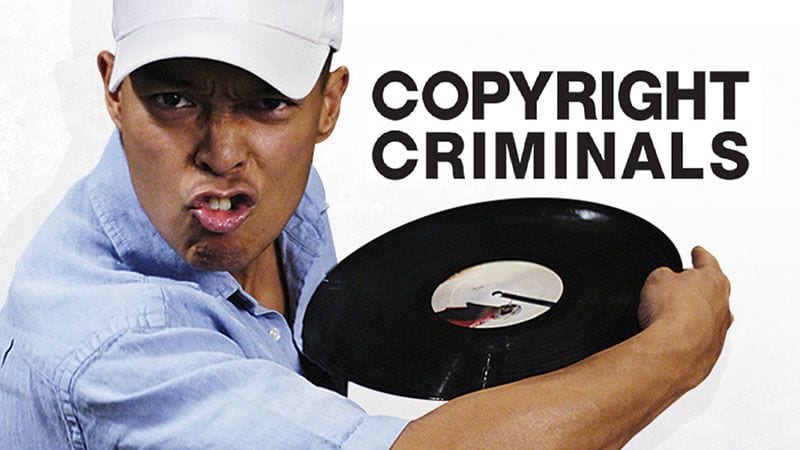 To that point, Franzen tells us later in the film about Clyde Stubblefield, a black session drummer and former bandmate of James Brown, nicknamed “The Funky Drummer” whose work was lifted once and then repeated on hundreds of songs after that. No lawyers came to his aid to defend his intellectual property and his financial interests or his artistic brand. He was neither credited nor thanked for his work that appeared on any hip-hop tracks. Like all session musicians, his life remained the same while others around him succeeded. Copyright Criminals successfully communicates that disconnect between the lines, the privilege vs. detriment. When the industry came out with a list of artists you were not allowed to sample, who else could samplers turn to than to unrepresented and vulnerable artists like Stubblefield? For his part, Stubblefield seems pretty at ease with the idea of being sampled, though he does say, “I prefer to get my name on the record, saying ‘This is Clyde playing.’ The money is not the important thing.”

Surprisingly (or not), some of the more infuriating quotes from the film are from Steve Albini, the king-making rock producer who mixed Nirvana’s 1993 In Utero in his studio (a fact he is happy to remind you of). When Albini declares sampling “in the conventional way it’s used, you’re supposed to be able to understand what you’re listening to” it comes off as mansplaining. This is exacerbated when he reveals later that he finds sampling today “an extraordinary lazy music choice” and “easy”, which is easy to say for someone as accomplished and successful as Albini. In 2009, calling a thriving musical practice born from black music culture “lazy” comes off in 2018 as rather tone deaf (ironic, coming from a music producer), though Albini is not a stranger to these sort of expressions. Franzen brilliantly pairs this clip with a rejoinding George Clinton declaring three-chord rock music to be lazy.

One of the most effective tricks Franzen pulls out of his directorial hat is in his demonstration for his audience what sampling might look like. On a split screen, he shows old black and white TV footage of guitarists, juxtaposed with the Jackson 5, to make a mashup with a new beat and rhythm, remixed with various vocals. It’s the kind of thing that gets your heart pumping and compels you to dance in your living room, and is incredibly effective visually. As a mix-master, Franzen has a natural touch.

It’s also interesting to watch this 2009 film in 2018, hearing all these people like De La Soul and Biz Markie talking about how tough it was to go through the legal system over a hip-hop record and to know that some artists are now proactively and thoroughly crediting the people they sample. Frank Ocean, for example, credited the Beatles for two seconds of audio that is really more of a reference than a sample, and yet he credits them as collaborators. And don’t forget about when Drake sampled on his song, “One Dance”.

The film goes on to make the point that it becomes more viable to cover a song in its entirety in that era (the early ’90s) than it is to sample it. This raises the question, why don’t artists record covers and then sample themselves covering it? Naturally, that’s basically what happens with trip-hop artists like Tricky and Portishead, who would record a guitar riff and press it on vinyl so that they can then take that vinyl and sample it live during performances. This goes back to Jeff Chang’s point: “the laws have to change to help that culture do what it has to do.”

Copyright Criminals closes discussing the issue of mashups. Using Jay-Z’s vocals from the acapella release of The Black Album (2004), DJ Danger Mouse cut it over samples from The Beatles White Album. Black and white combined, of course, make gray. The film makes the point that Danger Mouse wasn’t trying to get fame and success from it and that its cult status came from fans on the internet. It seemed that the only people who were really sweating the underground bootleg, passed around on music sharing programs that came after Napster, were those at EMI. “Nobody made a dime from one of the most successful albums of 2004, and it didn’t have to be that way.” (Would that I could have heard the film’s take on Nightripper. a Girl Talk album covered by the doc, Rip!: A Remix Manifesto.)

In total, Copyright Criminals effectively informs its curious audience about the history of sampling, artfully conveys its aesthetic, and is smart about the issues at the heart of the story. You can see on the screen its lack of a large budget production-wise, which Franzen overcomes with a scrappy editing flare. Its DIY feel is evocative of the early sampling records it discusses. The two-disc DVD release includes deleted scenes and extra interviews with De La Soul, and an extended scene with Cee-Lo Green working out the use of a sample from Nick Cave. Why these scenes did not make it into the movie is not clear. Why Franzen stopped at 54 minutes when he didn’t have to is also unclear. This film was eventually broadcast on PBS’s Independent Lens, but before that, it was in making its rounds in the festival circuit and did not have to be cut for time. Maybe it had something to do with licensing rights? In the years since Benjamin Franzen premiered Copyright Criminals at the 2009 Toronto International Film Festival, he has immersed himself with production work in his own Atlanta-based company, Changing Images, which has created media, animation, and other digital content for companies as enormous as Coca-Cola and for talent as huge as Jimmy Fallon. But what Franzen hasn’t done is released another feature film. In a PBS interview he gave about the making of Copyright Criminals, it’s not hard to figure out why. “Making this film has meant sacrificing more profitable work that will not come back; this film closed many past career opportunities, while also opening up new ones.”

Additionally, producing this film sounds like it might have been a bit grueling; making a film about copyright law in the music industry, using the samples of innumerable artists, thus made him and his team vulnerable to the exact kinds copyright laws they were discussing. It took painstaking work to know and understand the law, and make sure they were on the right side of it. They were able to invoke the assistance of Kembrew McLeod, a professor and expert in copyright law at the University of Iowa, where Franzen was a student (fun fact: this was around the same era that Scott Beck and Bryan Woods were also attending, before they wrote the successful screenplay for A Quiet Place). There’s also an unspoken irony to a film about music sampling using the medium of documentary, a genre that is practically demanding you fill in visual cues with previously produced archival footage (stock concert footage, old music videos, snippets of cartoons from the ’50s). After all, a documentary film is a form of visual sampling, is it not?