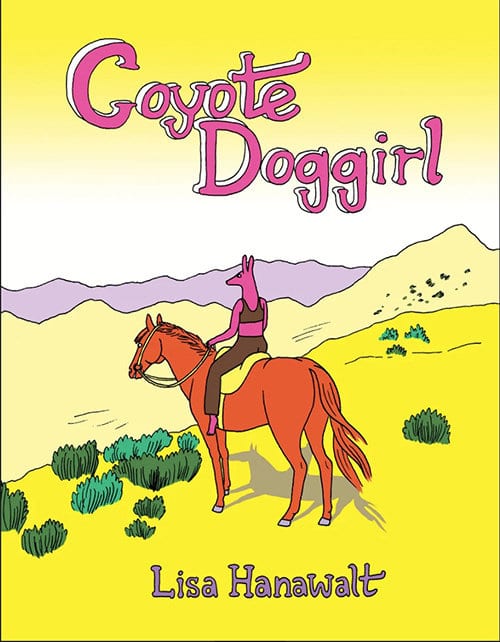 Welcome to a Wild West as familiar as tumbleweeds yet newly invigorated by a comics artist’s feminist eye. Lisa Hanawalt‘s Coyote Doggirl roams the border lands between cartoon and naturalism, nostalgia and invention, ribald slapstick and social commentary, all while satisfying each of their disparate and often contradictory genre norms.

In the tradition of anthropomorphic animals—Bugs Bunny, Winnie the Pooh, Garfield—Hanawalt’s main character is essentially a human with a dog’s head. In this canine universe, everyone is dog-headed. She has fingers and toes, wears long pants and a “crop halter top” (which she designed herself), and has ears that stick straight up above her snout of a face.

Athough Doggirl is a cartoon character in a cartoon world, Hanawalt infuses that world with a surprising level of visual realism. If it’s never bothered you that an anthropomorphic mouse named Mickey has a semi-anthropomorphic pet dog named Pluto, then Doggirl’s pony “Red” will bother you even less. Unlike his owner, Red is thoroughly realistic. Hanawalt renders him with loving precision. While Doggirl is almost entirely devoid of anatomy-defining, internal lines, Hanawalt gives Red and other horses just enough to suggest fully realized bodies — ones that include skeletons and musculature that the dog people lack. The shadow that Red casts on the cover is evidence alone that she is drawing from real-world references—corroborated by her one sentence bio “Lisa Hanawalt lives and rides in Los Angeles” and the nine names in her list of “Some favorite horses Lisa has known.” 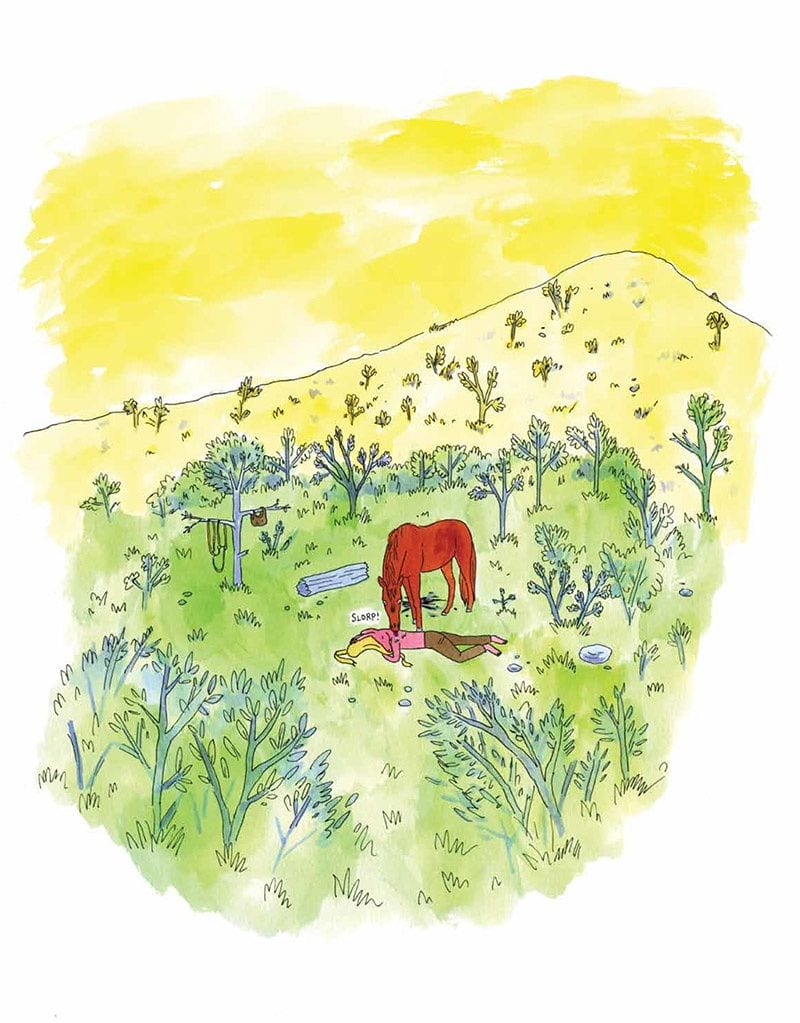 Doggirl’s setting is also more realistically rendered than she is. While Hanawalt’s style creates a minimalistic impression, pausing on an image allows the eye to travel over a surprising range of details—most of it in the rendering of desert and mountain plants. This world is further deepened by Hanawalt’s colors, which highlight the quirks of her brushes, giving watercolor texture to otherwise flat plains and barren skies. The openness of the western setting is also reflected in the formal choice of her unframed panels, usually three or four per page. The physical format of the book is small, about seven and a half by six inches, but the dimensions are offset by the expansive layout and bright color palette. 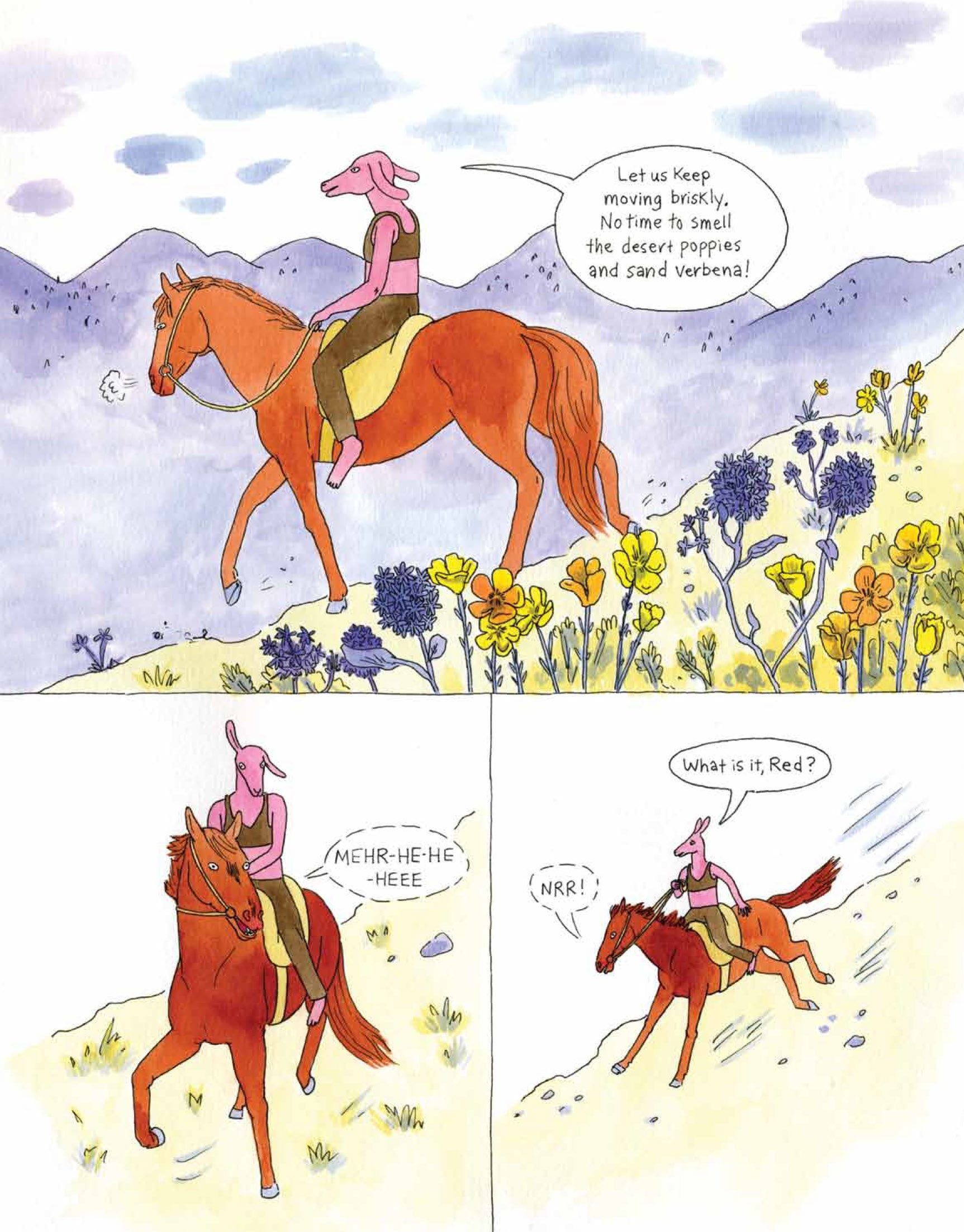 Hanawalt occasionally uses single-line frames, but she avoids formal gutters except to differentiate a flashback sequence which she colors darker. The stylistic choices are apt as Doggirl narrates escaping an attempted rape and the justified mutilation of her attacker. The event is the core of the novel’s nominal plot, driving the main character from episode to comic episode as her attacker’s brother and his two thugs pursue her for revenge. 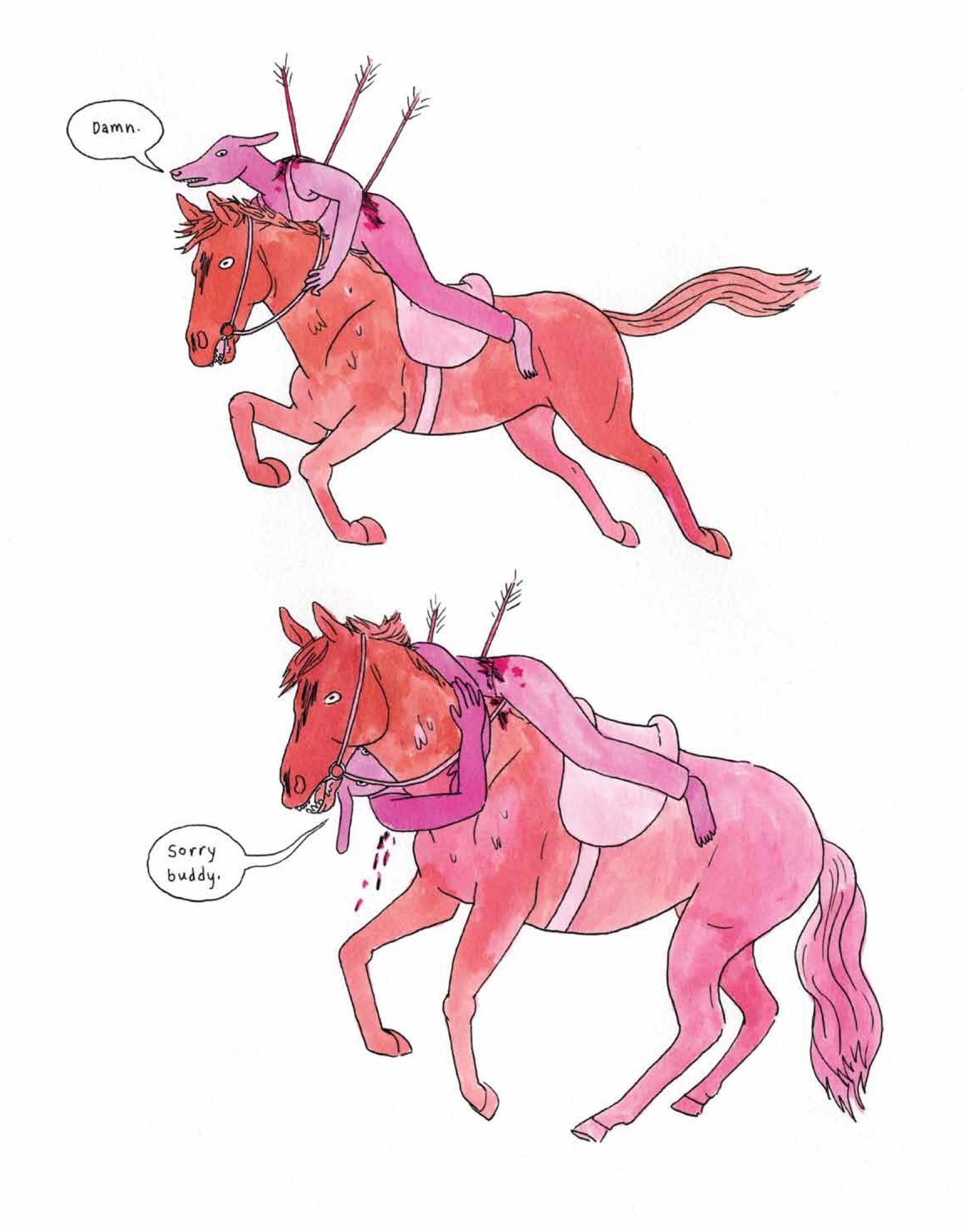 It may sound like a typical western set-up, but in Hanawalt’s capable hands it also encompasses genre parody and gender critique. Doggirl’s minimalistically form is a welcome counterpoint to a genre that traditionally exploits female bodies both visually and narratively. When a plot point suggests an occasion for nudity, Hanawalt draws Doggirl either only partially or from behind—and then without a teasing array of crosshatched shadows that indirectly suggest the undrawn contours of exposed breasts.

But Doggirl isn’t sexually neutral either. An opening page tilted “Coyote’s Wish List” includes a “pleasure saddle” drawn with an impressive array of dildo attachments. It’s one of Hanawalt’s many tossed-off gags. Though she can be unabashedly crude, the overall tone of the novel is oddly subtle—as when the arrow-wounded Doggirl collapses, mumbling “There’s dirt in my ear.” The bird pecking at her blood puddle ads a macabre secondary punchline. While humor is the novel’s most immediate appeal, Hanawalt uses it often to complex effect, as when she draws Doggirl’s would-be rapist’s leg as if it’s been meticulously sliced by deli machine. I laughed, even internally applauded, but not without discomfort.

Doggirl is her own hero, saving herself not just from her attacker but eventually from her pursuers too. While Hanawalt is happy to include a bit of gun and knife action, ultimately Doggirl saves the day by talking herself out of trouble and more than one genre cliché. Thugs are not your typical thugs in this doggy universe. Hanawalt’s Indians are even more complex—neither savages nor noble innocents, but an odd collection of individuals happy to give aid, but only after causing pointless harm.

Coyote Doggirl is proof that even a genre as seemingly played-out as the western can reveal a rich landscape if the right hands are holding the reins.