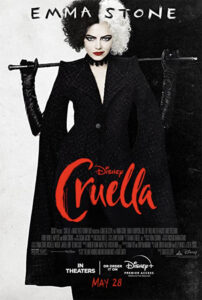 If there are some familiar notes in Craig Gillespie’s film Cruella, blame Meryl Streep and Heath Ledger. When films feature flamboyantly demanding female bosses or flamboyantly homicidal maniacs, then Streep’s and Ledger’s work in The Devil Wears Prada (2006) and The Dark Knight (2008), respectively, loom large. Though both Emma Stone and Emma Thompson are fantastic in the Cruella, they cannot help but create characters under the imposing shadows of Streep’s Miranda Priestly or Ledger’s Joker.

But even if there are some derivative points in Cruella, the latest in Disney’s mining of its vaults for live-action renditions of its animated classics, the film is an excellent crime caper and origin story of the iconic titular character. Taking its cues from the original source material, The Hundred and One Dalmatians by Dodie Smith as well as Clyde Geronimi’s 1961 animated feature, Gillespie’s vision is far darker and stylized – an homage to 1970s London when high fashion and punk slammed into each other, making the city the fashion epicenter of the world.

Though set in the ’70s, the aesthetic isn’t devotedly accurate, so the sartorial look of the film has a general span of late ’60s to early ’80s, with heavy influences of Vivienne Westwood, Alexander McQueen, Patricia Field, Betsey Johnson, and Anna Sui. It’s a kaleidoscope of fashion that leaves viewers a bit dizzy from the cavalcade of imaginative outfits that Stone and Thompson wear throughout the film. (Costume designer Jenny Beavan deserves the lion’s share of credit for the film’s critical success.)

Cruella‘s brilliant soundtrack does a great job of scoring the film, with music supervisor Susan Jacobs dipping into some choice songs that perfectly accompany the action: whether it’s David Bowie’s rocking “Boys Keep Swinging”, Nancy Sinatra’s hypnotic “These Boots Are Made for Walkin’’, or Judy Garland’s tremulous “Smile”, the music is a key component in manipulating audiences’ reactions to the actions. The Rolling Stones’ psychedelic rock of “She’s a Rainbow” does a gorgeous job of scoring the montage of Cruella coming of age, as well as, impishly buttressing scenes of her prodigious talent at petty theft, as she breezes through the streets of London, collecting lucre from unsuspecting victims on buses.

Working off a script by Dan Fox and Tony McNamara, the origin story of Cruella De Vil is a sad one, suitable for Gillespie’s Tim Burton-esque interpretation of the story. Born to a poor, but loving mother (Emily Beecham), young Cruella – born Estella – has a troubled childhood that is marred by tragedy that leads the young Estella to become an orphan. She finds kinship with two child grifters – Jasper (Joel Fry) and Horace (Paul Walter Hauser) – and the three grow up to become expert pickpockets and petty thieves.

The brilliant, fashion-obsessed Estella is an extraordinary criminal, but she wants more. Through the kind machinations of Jasper, she lands a job at the iconic department store, Liberty, which is handily near Carnaby Street, a major inspiration for the film’s look. Starting from the bottom (there’s an amusing montage of Stone’s Estella cleaning toilets and schlepping trash to the alley set to the Zombies’ “Time of the Season”), she pines to do more, hoping to insinuate herself in the tailoring department.

After a drunken night of cleaning the store, she stumbles into a window, rearranging the stiff, stodgy vision of the window dresser, Malcom McLaren’ing the whole thing. Though the store’s oily manager wants to fire her, fashion giant Baroness von Hellman (Thompson), sees vision and brilliance in Estella’s work and hires her on the spot.

What follows is a pitch-black comedy that plucks inspiration from such disparate sources like Carol Reed’s Oliver (1960), the aforementioned Devil Wears Prada, David Bowie, the Sex Pistols, and Alex Cox’s Sid and Nancy (1986). Once the plot’s major twist is unveiled, we’re watching a duel between Stone and Thompson, and the two divas revel in their roles, chewing scenery and striking dramatic poses and just being super fabulous.

Stone – slight inconsistency with her accent notwithstanding – does a masterful job of filling out the spidery concept of Cruella. As her character’s grasp on sanity loosens, Stone is able to masterfully portray her emotional fraying. During the film, she essentially must play two characters – the meek, dutiful Estella and the unhinged Cruella – and does so with aplomb, ably showing Cruella’s increasingly bleak hold on her sanity and morality.

As Cruella’s nemesis, Thompson marches through the role like a haughty, self-possessed drag queen. Like Stone, Thompson is given a rack of fabulous costumes, each more stylized and ridiculous than the rest; the sharp tailoring of her outfits reflects her imperious, queenly attitude. With her snappy reading of the lines, Thompson comes off as terrifying. Gillespie gifts the actress with some great closeups to allow for her to do some great emoting, using her beautiful yet expressive and rubbery face to convey a million variations of contempt, anger, or contempt, in a single acrid curl of her lip or flare of a nostril.

But the brilliance of Stone and Thompson presents an interesting scenario for viewers: who does one root for in a film like Cruella? An increasingly violent and horrifying anti-heroine or the evil villainous antagonist? Both actresses do enough to flesh out the characters, so that they don’t come off as merely one-dimensional cartoons – and Stone’s Cruella has a tragic, Dickensian back story that always informs whatever diabolical shenanigans she gets herself into. But the script seems to struggle with who the audience should relate to. At certain points, the empathetic and warm performances of Fry and Hauser as her family-cum-henchmen mean that they are the most likable and endearing characters. Their early scenes with Stone are sweet but soon their interactions become menacing and disturbing as Estella’s transformation into Cruella means she lashes out at her friends, treating them cruelly, abusing their loyalty.

A film like Cruella tells its story with arresting set pieces and there are some jaw-dropping scenes staged beautifully. When Cruella begins to orchestrate elaborate ways to scoop and usurp the Baroness’ dominance on the fashion scene, the audience is treated to some visually eye-melting scenes – many of which amp up the fashion aspect of the film (arguably, the film’s strongest suit). The scenes are staged with stunning ingenuity, reflecting the brilliance behind the character’s ability to steal focus away from the Baroness.

At one fashion show, for example, the Baroness makes a grand entrance, looking fabulous, only to be upstaged by a virtuoso Cruella, who is deposited at the foot of the red carpet, by a garbage truck, tumbling out in a tangle of tulle, before emerging in a gorgeous gown with an impossibly long train. To top off that spectacle, she quickly exits the scene, holding on to the back of the departing truck, letting the train unspool dramatically, leaving the poor Baroness whimpering in its wake.

In another incredibly shot scene, Cruella sets up a booby trap for the Baroness, secreting moth larvae into a vault that is storing a collection of precious gowns. Once the vault is opened, thousands of moths emerge fluttering everywhere, causing extras to dash in a panic. The Baroness, to her credit, was impervious, standing ramrod still as the tsunami of bugs washed over her.

So much works for Cruella that when it doesn’t, the faults stand out. Gillespie is committed to telling his story in a dark, stylized manner, having Cruella adopt a Sid Vicious/Adam Ant posture, which works fabulously. As she descends into madness, her outfits begin to reflect her further embrace of evil, and it’s glorious to watch such an extravagantly awful villain emerge.

However, because this is a Disney property, there are moments when the script pulls back and it hedges its bets. For example, we’re led to believe that at one point, Cruella killed a pack of dalmatians to make a fabulous coat (but she doesn’t – a surprisingly disappointing narrative retreat that rings false); we’re also assured a number of times, that Cruella isn’t interested in killing her nemesis, just humiliating her, which doesn’t feel wholly consistent with the character’s feeling of hot vengeance. Also, the family unit between Cruella, Jasper, and Horace endures despite her increasingly cruelty and awful behavior. Thus, the affection begins to feel forced towards the end, as the power imbalance grows between Cruella and her two friends (who devolve from partners to henchmen). But these are minor quibbles, because the over all experience of watching Cruella is a thrilling and stylish one.