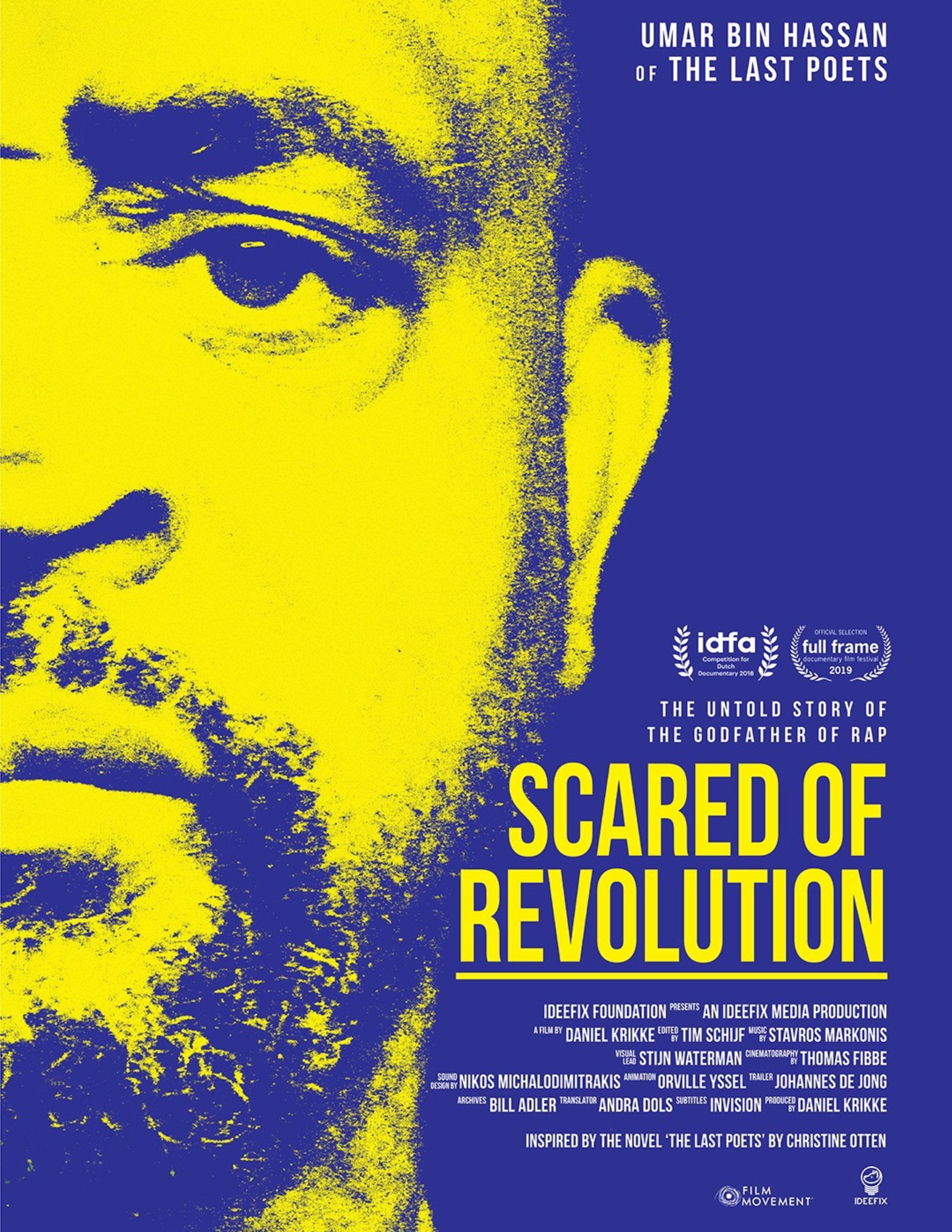 “…the cost of revolution is 360 degrees,
Understand the beginning to be the end,
And nothing is in between,
But space and time that I make, or you make,
—The Last Poets, “When the Revolution Comes”

Chances are, you’ve heard the voice of
Umar Bin Hassan, a member of the radical collective of wordsmiths known as The Last Poets.

From Brand Nubian, to the Notorious B.I.G., to Kanye West, the Last Poets have been consistently sampled for decades. Hip-hop, the most lasting and revolutionary contribution to popular music in the post-War period, does not exist without Hassan’s work.

In writer-director Daniel Krikke’s
Scared of Revolution, audiences are afforded an intimate portrayal of Hassan that rivals the naked emotions found in his music.

As a young man, Hassan sold his sister’s record player to purchase a bus ticket from his native Akron, Ohio to New York City. It was there that he joined the Last Poets, whose birth was on 19 May 1968, during a celebration of Malcolm X’s birthday.

The group’s self-titled first album, released in 1970, was politically charged but also served as a first-hand account of what it was like to be black in New York at the tail end of the 1960s. Topics discussed include everything from deconstructions of New York’s gargantuan nature, black love, and of course, revolution. The searing rhythm and raw anger on the Last Poets’ debut album laid the foundation for Gil-Scott Heron, whose own career came on the heels of the Poets’ debut, and the explosion of hip-hop music in the late-1970s.

Before scaling to these artistic heights, Hassan found himself mired in a youth that was both atypical and brief. From an early age, he had to provide for his family by being a shoeshine, a profession that demands character and a sharp tongue. When his family had nothing to eat, the young Hassan would bring home bologna and crackers purchased with what little money he earned.

“If a poor man has any depth whatsoever, you’d best believe they reached into their souls to get it,” says Hassan.

He was also witnessing the struggles of his father, a jazz musician who never felt he got the recognition he deserved. An especially memorable line sets up a recurring scene in which Hassan goes to various clubs to watch his father play but never goes home with him. The film’s first scene finds Hassan opening up to a childhood friend about the lack of a consistent father figure in his life. “I wanted him to take my hand and walk with me somewhere,” says Hassan.

It is that undergirding of aimlessness and the incessant thoughts of his father that arguably explain the disparate masks Hassan has worn throughout his life, from that of a radical, a drug addict, an absent father, to his current garb: a repentant grandparent. 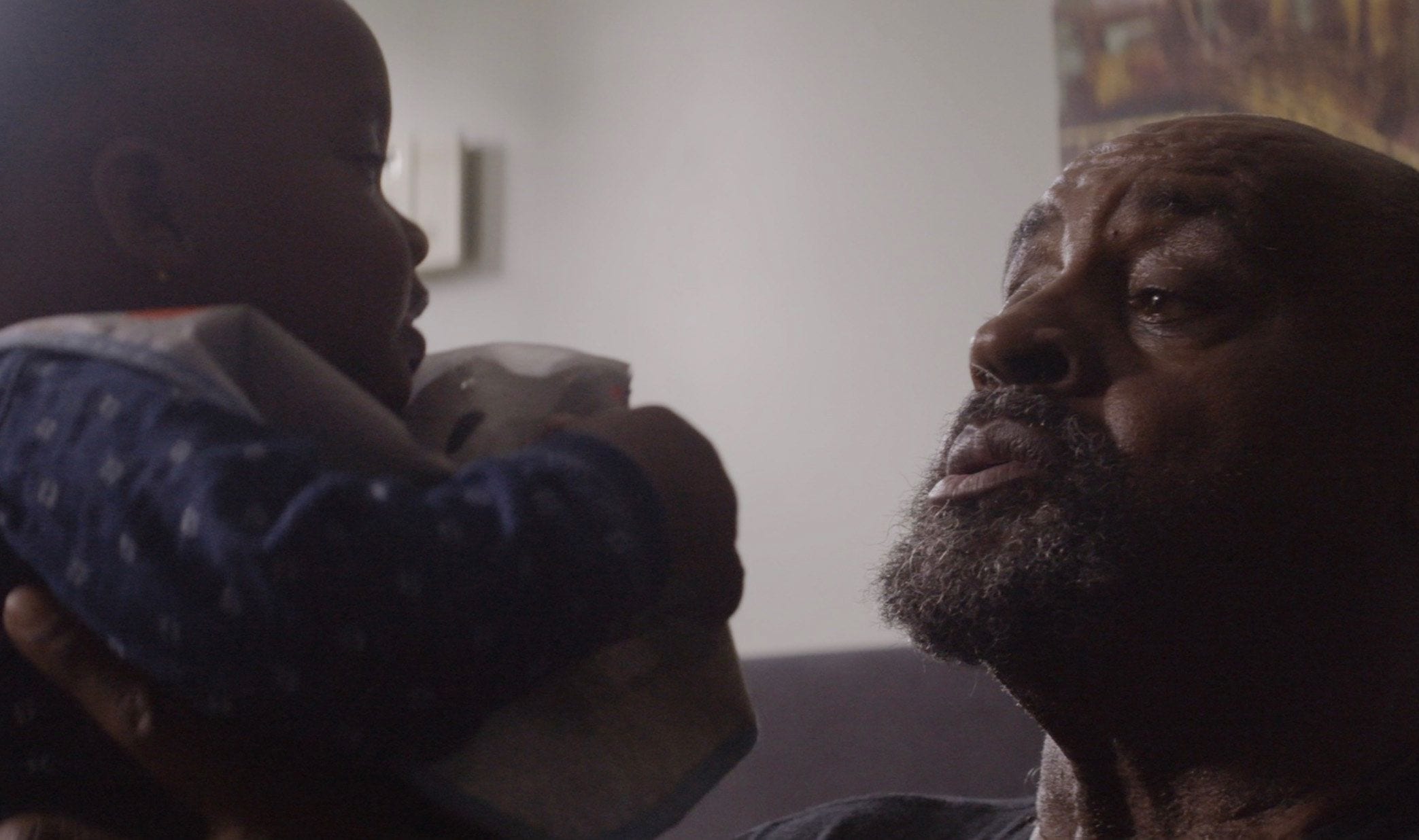 It’s hard to not stare at Hassan’s eyes—they are opened wide and have seen a lot, gathering fatigue, confusion, and remorse as proof. He’s a man with nothing to hide. His eyes accent his honesty, especially when he describes the physical sensation of doing crack-cocaine for the first time as “joyous” and “the most wonderful feeling in the world.”

Hassan struggles to hold back tears as his mother describes how he went from taking her money for drugs to eventually pulling himself out of addiction. He is not so much haunted by the shame of being a drug addict as he is by the guilt of stealing from his mother.

The footage of a recent Last Poets performance shows that Hassan’s voice is still as authoritative as it was in the ’60s and ’70s. The performance proves mesmerizing, as Hassan bears the hypocrisy of living against the ideals he pontificated upon in his youth.

Krikke’s documentary is well-served by testimony from Hassan’s family and friends, which include his mother, sister, and daughters, fellow Last Poet Abiodun Oyewole, and hip-hop historian Bill Adler, who all elucidate upon their personal experiences with Hassan. Of special interest, is Oyewole’s story about how “N*****s are Scared of Revolution”, The Last Poets’ most popular song, came about. According to Oyewole, he asked Hassan what he had learned after living in Harlem for a month, urging him to answer in the form of a poem. The result was a five-minute opus, a simultaneous love letter and lamentation signed, sealed, and delivered to the black community.

With a run time just over 70 minutes, the film is brief, naturally leaving a lot to be desired. Missed opportunities include Krikke failing to mine through live performances of the Last Poets, including a live performance of “This is Madness” with Pharaoh Sanders in which Hassan nearly loses his voice. Besides a handful of photographs of Hassan and the Last Poets, we don’t see the New York that gave birth to the group, an omission which makes it difficult to theorize a complete milieu for Hassan (but he does describe it as “…magical, sick, distorted, and twisted”).

Besides not receiving a visual representation of Hassan’s New York, there’s little discussion of his ideological origins. The Last Poets were born of a radical political moment, one in which the possibility of revolution swept through the world. The group’s work heavily draws upon Malcolm X and Black Nationalism, but these topics are hidden. This lack of political discussion is odd, especially when one considers the fraught state of affairs in the United States and abroad.

These omissions are symbolized in a scene in which Hassan, while roaming Akron, Ohio, becomes visibly frustrated with the fact that none of the buildings he lived in as a child remain. He has no proof of his coming-of-age in Akron, hence his lack of a connection with the city. We as an audience lack sufficient pull, in terms of content, to be emotionally engaged with Hassan’s life.

Whatever the film lacks in content or background is made up for in the importance of introducing Umar Bin Hassan to a new generation. Hassan is lucky to be alive, and we are lucky to befriend him at this period in his life. This “rockstar”, who has lived what Adler describes as an “itinerant” lifestyle, is tired but also trying to correct his mistakes. And it is that humility from such an intelligent and accomplished individual that makes watching Scared of Revolution a rewarding experience.