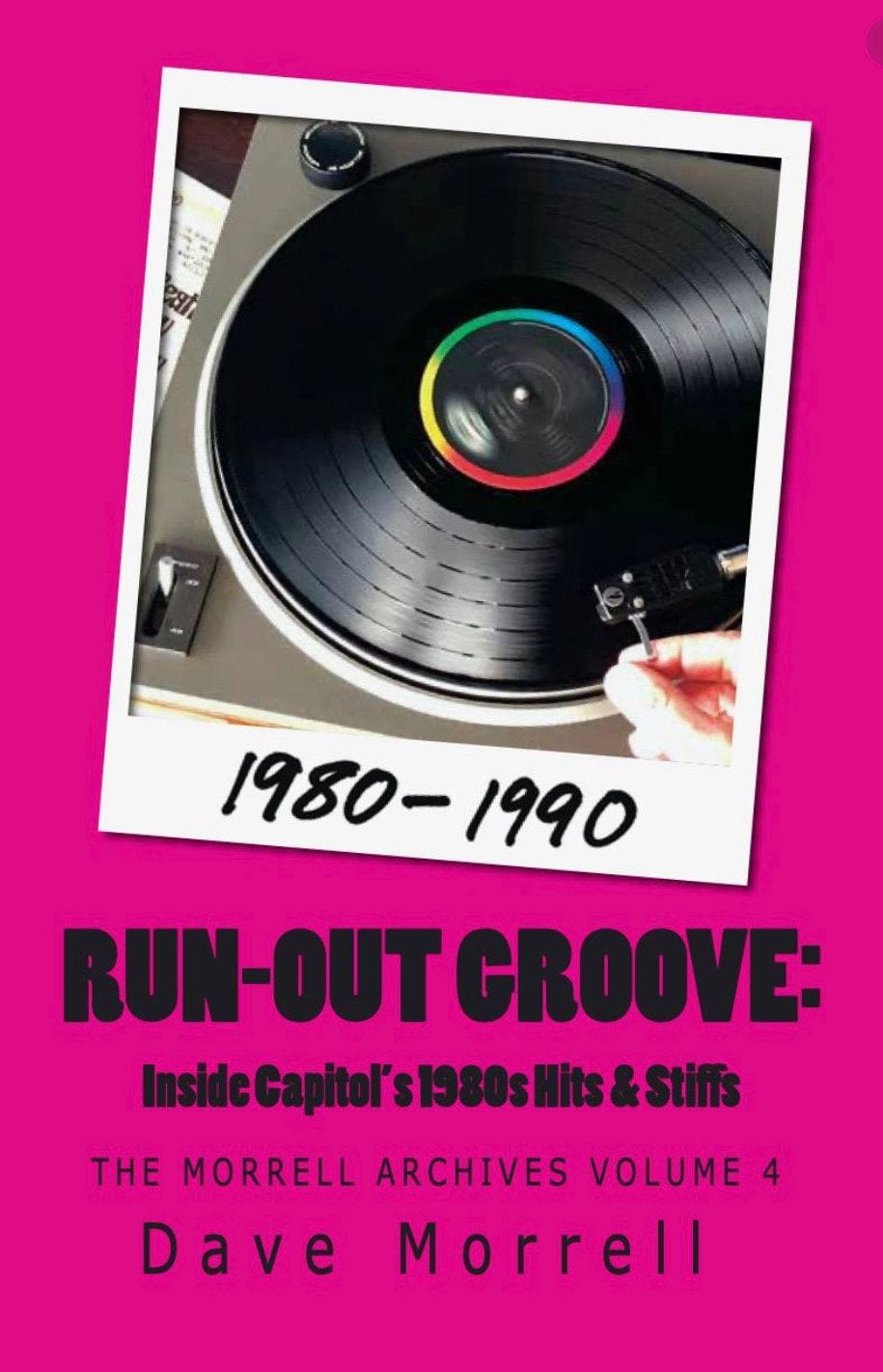 With its seductive siren song of fame, fun and fortune, the music industry seems like a wonderful world to be part of. But it’s also a business, and for its employees that means a lot of hard work. As an experienced promotional representative for record labels, Dave Morrell was in contact with almost every part of the industry, from artists to radio stations to record stores. His fourth volume of memoirs, Run-Out Groove: Inside Capitol’s 1980s Hits and Stiffs, covers a tumultuous decade in the industry, and shows how being inside that world can be exciting while also being exhausting and demoralizing.

Morrell started in the music business in the stockroom at Warner Brothers, and first worked as a promoter for that label in New York City. He moved over to RCA Records, and after a corporate shake-up, joined 20th Century Fox Records – just in time to shepherd the Star Wars theme up the pop charts – and then was hired by Arista Records.

In 1979, wearied by Arista’s non-stop 24/7 demands, he was more than receptive when Capitol Records called to ask him to come to Los Angeles for a job interview. “On a cold winter day, to receive a call asking you to come out to California on a sunny day, and to walk into the home of Nat King Cole, where Sinatra and the Beach Boys recorded – it was so overwhelming. It was unbelievable.”

Part of Morrell’s interest in Capitol Records was that it was the Beatles’ US label, and the label was on a hot commercial streak with acts like the Knack and Bob Seger. He said “yes” to Capitol’s offer, moved to Los Angeles, and ended up staying at the company for ten years.

Morrell specialized in promoting Capitol’s releases to FM radio stations, which occasionally caused internal conflicts when a record “broke big” in that market but didn’t catch on anywhere else. “We could take something up the FM charts, and you could see the company getting revved up. But then they would think, let’s get 100 adds [at AM stations] and it doesn’t work that way. You can’t just call it in.”

Capitol’s representatives also had to strategize when a record didn’t take off as expected; one example was Crowded House’s 1986 debut album. The band’s primary songwriter, Neil Finn, had already had North American hits as part of Split Enz, and everyone at the label loved the band – “they were so funny, in the limo it would be like riding with the Marx Brothers” – but it took more than a few tries to get traction with the album. Morrell remembers that “when we took it to FM stations, we got love, but not enough right across America to jump on it.”

The label then tried pitching the album to “alternative” radio stations, but that didn’t work either. “And then we were losing our minds about what to do with this great album. We went to college stations, and that was really hard because there was a lot of turnover at those stations. Then we noticed that Simply Red, whose album had a similar vibe, was breaking in the adult alternative market. So we launched Crowded House at that market, and son of a gun, we were able to get up that chart. Then it crossed over to the other stations and brought that home for us.”

But everything inside Capitol was not as cooperative. Some of the most astonishing parts of Run-Out Groove are Morrell’s recreations of foaming-at-the-mouth expletive-laden conference calls with Capitol’s sales executives. There was, he says, no such concept as a “toxic workplace” in the 1980s, and at the other labels where he had worked, “I would maybe hear from my boss once a year, and they never yelled”. The corporate culture at Capitol was markedly different. One of Morrell’s bosses got the nickname of “Cattle Prod” because he kept a cattle prod on his desk — but, as it turned out, it wasn’t a joke. That boss was later sued by an ex-employee who alleged that the executive had actually used the cattle prod on him.

While 1980s corporate culture might have accepted abusive tirades toward employees as an acceptable motivational technique (see James Foley’s film adaptation of David Mamet’s play, Glengarry Glen Ross, 1992), in retrospect, Morrell says, its main effect was to make the promotional staff feel “emotionally upset. Like any job, you put on a nice outfit, feel good about yourself, know that you’re going to go out and play music for others. But think about it this way. You like a record, and you say to me, hey, I really like it. And I’d say, great! And then you get on a conference call and the boss could care less what you thought. Which hurts.”

But Morrell also has happier memories of that decade. There were records from little-known artists that were delightful unexpected successes, like Katrina and the Waves’ ‘Walking on Sunshine’: “I got the single in the mail, I didn’t know who it was, I dropped the needle, and, man, I was dancing on the roof of my car! That was a one-listen hit.” And then there were records that looked like winners but just didn’t work out, such as Duane Eddy’s eponymous 1987 album and Paul Shaffer’s 1989 LP Coast to Coast. For Morrell, as a Beatles fan, the non-success of Paul McCartney’s ‘Spies Like Us’ was particularly sad (although, he admits, “I’ve heard it a thousand times now but I can’t remember how the song goes”). When asked if there was an unsuccessful record that he thinks should have been a massive hit, he immediately names Flesh for Lulu’s Postcards From Paradise. “They were so into it, those kids, so animated, so much fun, and they were like the New York Dolls but with a melody.”

Morrell left Capitol at the end of the 1980s, just as the industry was starting to undergo major technological changes, like the advent of email communication. He doesn’t think these changes were necessarily for the better. With email, “there’s no synergy between the two people, no inflection, no way to read it to see how it goes.” But what really broke his heart is the industry’s evolution away from the “camaraderie of Woodstock Nation” into corporatization and conformity. “Radio station managers have their marching orders now, and that’s to run the station. There is no time in their day or week to spend any time talking to people about records.” But technological change has also brought some improvements. Record stores, he observes, could be “culty and difficult”, but now people who hear a song they like can go to YouTube or Spotify and discover a whole world of music that’s new to them. “And that’s a wonderful thing.”

Now retired from the industry, Morrell still lives in Los Angeles and is working on the next volume of his memoirs.