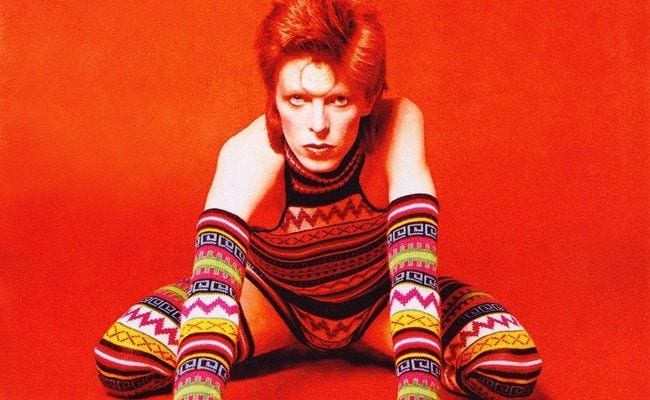 In the ten long years it took between David Bowie’s last two studio albums, 2003’s Reality and 2013’s superb The Next Day, he kept fans occupied with a steady stream of beautifully produced deluxe reissues of some of his key albums. Station to Station even got its own beautiful box set. Earlier this year, Bowie announced that the reissue series would continue, but in a much bigger way. Released this past Friday, Five Years (1969-1973) is a lavish collection of all the official releases from his 1969 David Bowie album (originally released in the US as Space Oddity) to his acclaimed 1973 covers album Pinups. Available on CD and vinyl, it’s a Bowie fan’s dream come true.

The beautifully produced vinyl set runs a steep $250, but there’s a lot for the money. In addition to the bookend albums mentioned above, the box also includes the studio albums The Man Who Sold The World, Hunky Dory, two versions of Ziggy Stardust and the Spiders From Mars (the original mix and a 2003 remix by the great Ken Scott) and Aladdin Sane. The set also features two 2-LP live albums, both of which will be familiar to Bowie fans: Santa Monica Live in ‘72 and the live soundtrack to the concert film Ziggy Stardust and the Spiders From Mars. The albums are all lovingly recreated with their original artwork and even inserts. Perhaps the jewel of the box is a 2-LP set of extras, b-sides, bonus tracks, and miscellaneous rarities that span the entire period covered by the box. Titled Re:Call 1, it features a previously unreleased single edit of “All the Madman”, non-album cuts such as “Holy Holy” (both the rare original single version, and the later recording made during the Ziggy Stardust period) the b-side “Amsterdam”, and numerous other goodies.

The box also includes a beautiful coffee table book that features a section on each album, with fascinating and insightful song-by-song reflections by producers Tony Visconti and Ken Scott. The book also includes drawings, draft ideas that Bowie had created for the album cover art, advertisements from the period, and artwork. There’s even an introduction by the Kinks’ Ray Davies. The book is perfectly made to read along with each album as you play them all chronologically.

Most importantly, all of the music has been remastered carefully and with exquisite perfection. These albums have never sounded better. Hunky Dory, for instance, is a revelation. Every strum of the guitar and ping of the piano are as crystal clear as if the band was playing in the room with you, a remarkable achievement given the fact that these albums are over 40 years old. Bowie’s reissue projects have always been top notch and subject to stringent quality control, but Five Years (1969-1973) sets a new standard. The improvement in sound quality is evident on every album, but it’s particularly noticeable on the live albums and on the Re:Call 1 disc.

The albums represented in Five Years (1969-1973) are some of the most important in rock history, and they are being presented in higher quality than ever before. And what’s particularly exciting is that Bowie’s team has announced that this is just the beginning of what will be the absolute quintessential David Bowie library. There will be more David Bowie box sets on the horizon, covering albums yet to come in his chronology. The mere thought of albums like Young Americans, Low and ”Heroes” being subject to this deluxe treatment is enough to make a Bowie fan salivate uncontrollably (or at least give a shudder or two of excitement).

One quibble, and it’s a minor one — several tracks that appeared as bonus tracks on the 1990 Rykodisc reissues of these albums did not make the cut on Re: Call 1. Most of them are inconsequential, but there are a few that really should have been included: “Sweet Head”, “Bombers”, “Lightning Frightning”, his cover of Bruce Springsteen’s “Growin’ Up” (which might show up on the future set, since although it was included on the Rykodisc release of PinUps, it was actually recorded early on in the sessions for his next album Diamond Dogs) and — perhaps most importantly — his recording of the hit he gave to Mott the Hoople, “All The Young Dudes”, which has appeared on several Bowie compilations. It would have been nice to fit these into the Re:Call 1 set, and they are arguably more vital additions than several tracks that were included. Still, given the overall brilliance of this set, that’s a minor complaint, yet it does keep it from being as complete as it should.

In any event, it’s certainly an exciting time to be a David Bowie fan. Not only do we have his first new album in a decade with the riveting The Next Day from 2013, last year he released an all-new multi-disc compilation ironically titled Nothing Has Changed that covers his entire career with the addition of a brilliant new song “Sue (Or in a Season of Crime)”, and now we have the start of what will be the definitive complete collection of Bowie’s music. With the possible exception of The Beatles, nobody has put forth a more vital catalog of recorded popular music in the rock era as David Bowie. Five Years (1969-1973) gives fans the opportunity to enjoy these masterworks in as high quality as possible, on 180 gram audiophile vinyl. It’s obvious that loving care was put into the creation of this set, and that it’s meant to represent the ultimate collection of Bowie’s career from “Space Oddity” through “Changes” and “Life on Mars?” to glam rock classics like “Ziggy Stardust”, “Suffragette City”, and “The Jean Genie”. Whether your preferred format is CD or vinyl, this is a set to treasure, a must-have for any Bowie devotee.