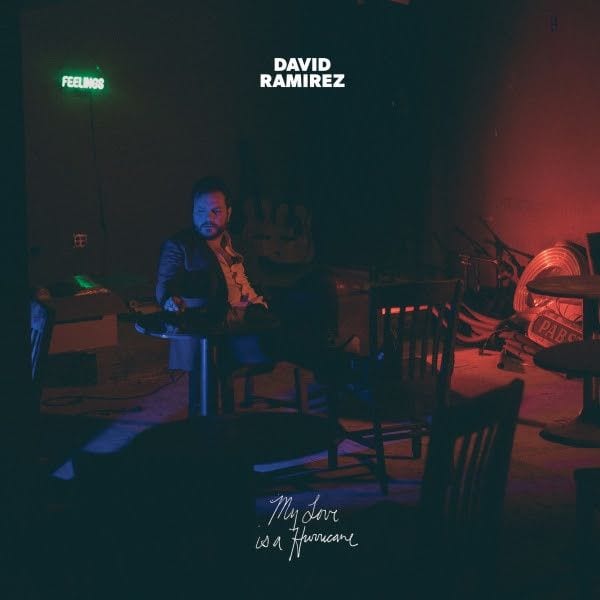 My Love Is a Hurricane
David Ramirez
Sweetworld/Thirty Tigers

David Ramirez was a great folk singer, but he hasn’t been for some time. To be clear, it’s not because he’s fallen off, but because he’s moved so far from the sounds of his early albums. That sound peaked with 2015’s Fables, a stunning collection of Americana. Ramirez followed that one up by listening to the Cure and releasing the surprising but equally good We’re Not Going Anywhere just two years later. Now Ramirez moves further away – consider the folk and country influences gone – with the complex, R&B-driven My Love Is a Hurricane. While the music surprises once again, it also keeps Ramirez’s strengths (his songwriting and his vocals) at the fore, focusing the proper narrative on Ramirez’s career, not on his unexpected changes but the remarkable consistency at the center of his art.

In a live setting, it becomes apparent how big Ramirez’s voice is; he sings more coolly on record much of the time. Here, “I Wanna Live in Your Bedroom” highlights that power. He’d be testing the song on the road since at least 2018. The music leaves plenty of space for Ramirez’s voice as he builds his longing, and the reverb on the vocals helps fill in the space. The cut would be effective with no instrumentation, and Ramirez makes the smart choice of leaving some piano primarily to create the frame for the song.

His vocals shine on every track, but most of the album focuses more on groove than “Bedroom” does. The title track brings a little gospel into the mix. The song uses dynamics to help articulate Ramirez’s passion. It stays under control throughout, but its surges show the tumult of the singer’s “hurricane”. The following track, “Hallelujah, Love Is Real!” turns that storm into a focused celebration, an epiphany of the possibilities of love despite a history that says otherwise.

That history remains complicated. Ramirez’s latest album began in the throes of a joyous romantic relationship but persisted through its demise. Even so, the album brings encouragement, even the track titled “Hell” brings some fire in its retro-R&B sounds. Ramirez resisted the impulse to turn dark and inward, maintaining an open-hearted approach to his pop record. The album opens with a question to a lover and closes with a call to prevail. Ramirez, in any form, doesn’t go small, and matching this romance with these sounds lets him fully express his unbowed feelings.

This record does mark a massive shift from, say, Apologies, but the core remains. “Easy Does It”, interestingly brings some of the 1980s synth approaches from his last album, but the songwriting, particularly on the verses, could fit on nearly any Ramirez album. The patter, the phrasing, a particular cadence – these traits define Ramirez’s work in some sort of essential way. As he explores new sonics, that core vocal line, here largely delivered in a casual tone until the chorus, continues a thread that’s run through his work. It will sound familiar to old fans even as Ramirez moves his creativity into new places. He’s been a folk singer, an Americana artist, a synth-popper, and now a pop/R&B vocalist, but he hasn’t sacrificed strength in any area. He’s just added variety to a potent catalog.