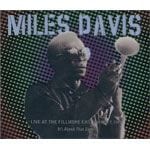 The group that Miles Davis brought to the Fillmore Auditorium on March 6 and 7, 1970, the so-called “lost quintet”, was a loud and fierce avant-garde jazz/rock ensemble performing with dizzying power. There’s enough energy captured in the first track of Live at Fillmore East (March 7, 1970), “It’s About That Time”, to wake the most jaded of listeners. This release serves as a reminder of all that’s possible and good in music, particularly loud electrified music. The squawks and multicolored blasts of Corea’s ring-modulated and distorted electric piano define the proceedings; Miles, breathing fire, leads them.

This two-CD package presents the two sets of the second day of the Fillmore engagement. Bitches Brew, Davis’ famous jazz/rock record, had been recorded but not released at the time of this concert. These new CDs give us the Bitches Brew material as interpreted by Miles’ working band, as well as versions of “It’s About That Time” from In a Silent Way, two versions of Joe Zawinul’s “Directions” (which had already been recorded in the studio but would not be released for years), and Wayne Shorter’s “Masqualero”, which was the oldest piece in the set, having originally been released on Miles’ Sorcerer album.

In his liner notes, James Issacs remarks that this was Miles’ first engagement in front of a rock audience. Davis was clearly excited by the challenge. The aspects of his style that he refined in the period of the second great quintet are here: the darting chromatic lines, the exploration of the upper register of the horn and notes as charged as the air before a thunderstorm. Added to these qualities are power and bravado remarkable even for the great musician. Some of his playing is exclamatory, spitting bursts of notes, like phenomena in the sky over the ensemble. Sometimes his trumpet remains in the group’s midst, reacting to what they’ve done and challenging them. At other moments, Miles reaches up into the stratosphere of his horn and achieves those beautiful precipitous notes that made up the architecture and complexion of his sound. He seems to scale especially treacherous heights in “Masqualero”, where the trumpet seems inadequate for his expression; too limited in range, too sluggish, too tempered. He pushes the horn to its physical limits. After Miles, the rhythm section breaks into fragments behind Shorter’s tenor, as if they’re unable to sustain the pace any longer.

Chick Corea distinguishes himself as a great and inventive accompanist here. His playing gives the impression of a Bartok string quartet being improvised behind the soloist. His tone is wild and full of color, his harmonic palette vast, and his energy seems to fire the ensemble and clearly drives Miles. Here is a quick-minded and responsive partner for Miles, in full embrace of the possibilities of electronic sound manipulation and volume, and harmonically acute and sympathetic enough to follow the great trumpeter on his flights, to dodge between phrases, or to cast shifting shadows on Miles’ brittle peaks. Behind Shorter, Corea can sound nearly antagonistic; his playing is so sharp and persistent. And this prompts Shorter to play with a ferocity that is striking. His tenor and soprano solos often start with his usual slippery and exploratory arguments, but often bubble over into sound exploration. He sounds at once thoughtful and utterly spontaneous. In some cases he is relentless, as in his “Directions” solo from the first set, and at other times, as in his solo on “It’s About That Time” from the second set, his statements are measured and expository.

The rhythm section is utterly at ease, relaxed and elastic. DeJohnette is deeply funky and expressionistic, often at the same time. Holland can play deep down, wah-wahed, and can also trouble the upper registers of his instrument in the freer passages. For ensemble unity, “Directions” and “Masqualero” from the first set are remarkable. Moriera’s earthy percussion instruments sound otherworldly in this context. At times he blends into DeJohnette’s playing so earnestly that he sounds like a part of the kit, and at other times he layers sounds and rhythms over the band. His playing here is so tasteful and transparent that one sometimes loses sight of what a critical part of the experience he is.

The recording is well balanced and physical. The trumpet and tenor frequently distort, but not to a degree that distracts from the music, and, in fact, it is often in keeping with the electric nature of the music. It is clear that this was a loud performance. The packaging, while winning in the cover photo of Davis, disappoints when it folds out to reveal two blurry photos of Miles on stage and a slick looking montage of the sidemen, featuring photos of Shorter and Moriera from the Weather Report days.

The most striking thing about this release is the utter commitment in the performance; it sounds urgent and is completely lacking in self-consciousness, which makes it seem exotic 30 years later. There is nothing introverted about it — it is focused outward, laser-bright, and escapes from the stereo as if from a time capsule. This is music of utter abandon, played by young virtuosos on the edge of convention. It is so bright and full of hope, so heavy with possibility, that it seems that it could start a musical movement on its own.