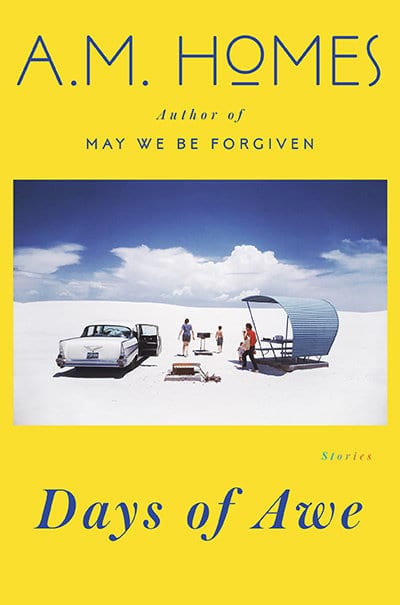 In a recent interview about her favorite short story collections, A. M. Homes describes two versions of a particular Carver story. The first, heavily edited by Carver’s infamous editor Gordon Lish (and Homes’ writing professor) is brutal in how a character deals with the tragedy of others. The second, Carver’s preferred version, shows the same character dealing with the circumstances in a kinder manner. To Homes, it showed the transformative power of editing and the art of revision.

This latest short story collection by Homes brings Carver to mind for a different reason: their canny, masterful handling of dialogue. Each story here could well be a masterclass in the art of writing dialogue as Homes employs it throughout to do much more than reveal character or move the story along. For non-writers, these stories show how to listen closely in our everyday conversations to what is said and, more importantly, what isn’t said. In our time, when so much communication happens online and asynchronously, preserving and evolving the art of two-way communication feels even more critical. Real-time dialogue, in the end, is about a give-and-take between two people; it’s an exchange of not just ideas but also emotions; it’s a crucial skill in every walk of life and one that we never stop developing.

In fiction, a dialogue sequence is more compelling and potent when it does multiple things simultaneously and with economy and rhythm. Homes shows this off very well here. There is, for example, dialogue as foreplay between the two main characters of the title story, ‘Days of Awe’, and the two characters in ‘Be Mine’. There’s the online chat form in ‘The National Cage Bird Story’, which is set entirely in a chat room and where the two main characters are surrounded by a set of people, all talking over each other instead of actually communicating.

Indeed, in almost all the stories, dialogue is used for setting mood and atmosphere, subtext to what’s actually happening on the surface, layering in inter-connected conflicts between groups of people, showing character quirks and tics that cannot be shown any other way, depicting the differences between words and deeds and between public and private selves, showing shifts in emotional states, foreshadowing or reminding us of other story or character issues; expressing in coded language as only people who have known each other a long time can do; and more.

Describing her attention to and use of dialogue, Homes invokes the influences of playwrights like Albee, Miller, Pinter and Churchill on her writing and says:

In that latter interview, Homes also gives a perfect metaphorical definition of a short story and how it is different from a novel:

I always say a novel is like taking the train cross-country, because you have a lot of time to go from New York to Ohio to Pennsylvania, and you are going to go the northern route or southern route. In a short story, basically, the train has left and you get on in Chicago. It’s like something has already happened. I say to my students [at Princeton, where Homes is a lecturer], ‘Why have we been called here? What is it you need us to pay attention to? Why are we supposed to stop everything else we were doing and come be in your story now?’ So there is a compression.

That is exactly what she does with these stories. She drops us into the middle of the ongoing life journeys of her characters at seemingly ordinary moments which then unfold in rather unexpected ways. The element of surprise here is not so much an added twist as a derailment — all done with Homes’ signature knowing winks and sly nudges. Sometimes, you can see the devastation coming even as you are transfixed and rooted in your window-seat. And, sometimes, a story takes a sharp corner so quickly, you could never have seen it coming.

With a pair of connected stories — ‘Hello Everybody’ and ‘She Got Away’ — Homes revisits the dysfunctional and highly consumer-driven Los Angeles she wrote about in her novel, This Book Will Save Your Life, and the nonfiction book, Los Angeles (National Geographic, 2002). The family here is constantly working hard at that LA lifestyle and to be other than who they are — to the extent that they hardly know themselves anymore, let alone each other. Yet, in some tragically symbiotic ways, they remain connected and dependent on each other as families and close friends do.

Consumerism and the many ways it plays into our lives has been a recurring theme for Homes in several works and many of the stories here explore it further. Beyond various objects that are status symbols or tribal decorations, as in the story ‘Brother On Sunday’, Homes also reveals what the acts of consumption, being denied consumption, and avoiding consumption tell us about the characters and, therefore, about society at large.

And, perhaps, when our present time has the ultimate consumerist and reality show host as US President, the story of how a man shopping for groceries and sundries with his family on an average day finds himself running a full modern-day presidential campaign, as in ‘A Prize for Every Player’, is not hard to believe.

A couple of stories slip through the genre cracks with fantasy and magical realism. However, the fabulism of ‘Your Mother Was a Fish’ and ‘Omega Point’, with its mer-people and levitating human beings, doesn’t seem out of place in their strange worlds, which Homes describes with a keen eye for peculiar details.

The aftermath of war is explored in three stories: ‘Days of Awe’; ‘Whose Story Is It and Why Is It Always on Her Mind?’; ‘The National Cage Bird Show’. In describing the violence inflicted on some of the characters here, Homes is more restrained than in previous fictional works. This toning-down might be in response to past criticism of the shocking and disturbing aspects of her storytelling but she still manages to shine a strong light on the horrific, visceral senselessness of it all.

To make sense of their worlds and be of some consequence even as outsiders is the main struggle for most of these protagonists. It is to Homes’ credit that the familiar fictional trope of the outsider does not wear thin at all and her people have distinct enough lives and voices for us to keep wanting to know what they will do or say next.

That said, there are occasions when the near-constant dialogue is clip-clopping along so rapidly — one-liner after one-liner, quip after quip — that it highlights the absence of and need for narrative. Three stories, particularly, could probably have used a few more narrative sections for intermittent relief and, frankly, to develop their plots more substantively: ‘All Is Good Except for the Rain’; ‘The Last Good Time’; and ‘Be Mine’.

The collection’s title is also the title of the best story in the set (published in Granta Magazine.) It refers to a particular period in the Jewish calendar: the ten High Holy Days between Rosh Hashanah (New Year) and Yom Kippur. In the more traditional sense, these days are about introspection, meditation, and reflection. They involve repentance and seeking forgiveness so that one might, on the tenth day, one gains absolution. It’s fair to say that most of the characters in these stories are sufficiently introspective and self-aware to know how they might be judged and why they might need absolution. However, in Homes’ darkly satirical telling of their lives, they either do not know how or desire to seek forgiveness. Repentance is definitely not one of the stops on their train journeys (although guilt certainly is.)

In that title story, the main character is a writer and she is asked at a genocide conference whether some subjects are so historically sensitive that we shouldn’t touch them in fiction. Recently, this same question has been posed in different ways across various communities about subjects that are culturally sensitive. Readers and writers are carefully re-evaluating past works of fiction to understand how they dealt with such subjects and trying to figure out how best to address them and who gets to tell the stories. The writer’s response is, one imagines, Homes’ own response as evidenced by this latest book from her:

I’d say the purpose of fiction is to illustrate and illuminate. We see ourselves more clearly through the stories we tell.