Johnny Depp is going to be gone someday, and for those enjoying his work posthumously, an assessment of his enigmatic career—bookended by the cotton candy of Phil Lord and Christopher Miller’s 21 Jump Street (2012) and the super commercial self-caricature of Pirates of the Caribbean films—will be… complicated. Hopefully the growing wreckage of his professional and personal life won’t obscure the only important thing about his work: he was, for a time, among the best actors of his generation. Indeed, as wealthy and popular as he remains, it’s arguable that he never gets enough credit for how fine of an actor he is.


Whether or not this is Jim Jarmusch’s best film and one of Depp’s finest performances (yes to both, incidentally) is for list-makers and audiences to debate. What was obvious in 1995—and the last quarter century has made increasingly clear—is that Dead Man, aside from merely being a quiet masterpiece, is one of the best American films of the late ’90s. Despite the Criterion canonization, it will likely linger as a cult classic; too straightforward (relatively speaking) for Jarmusch enthusiasts, and too unorthodox for mainstream tastes.

Case in point: by comparison, the ostensible “anti-Western” that got all the attention and accolades earlier in the decade was Clint Eastwood’s Unforgiven. Among other things, this film was hailed as critiquing—or at least complicating—many of the macho, hopelessly dated clichés its director and star took a healthy part in propagating back in his Spaghetti days as a lean, mean celluloid cowboy. As a conventional Hollywood blockbuster, the acclaim Unforgiven received was perhaps predictable, but does little to justify how overrated it remains. As such, it also serves to illustrate how difficult a path it is, and ever has been, for an independent artist to deliver an uncompromised product that penetrates Americans’ cream puff entertainment consciousness. 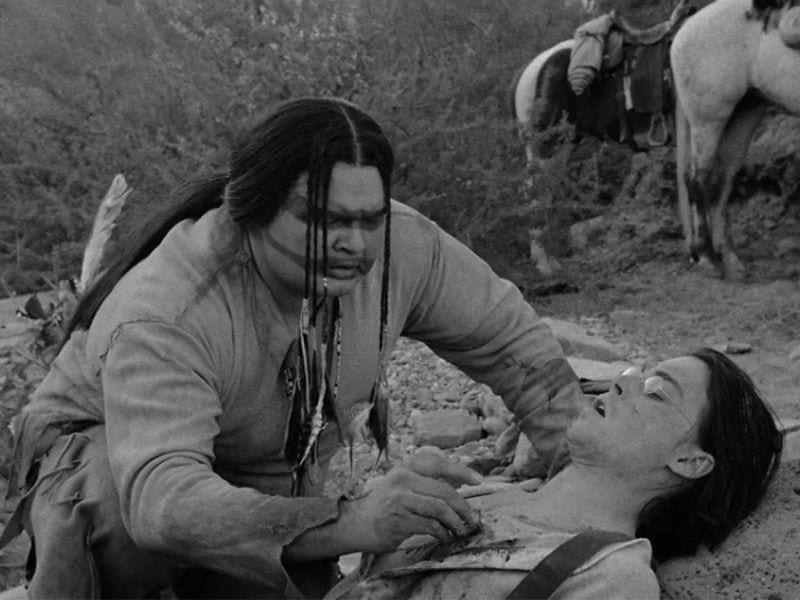 It’s difficult to conceive another director who could flawlessly balance the literary (in this case, the razor-thin line of having a character named William Blake reciting lines by William Blake to a Native American, “Nobody”, played by Gary Farmer, who not only knows, but reveres the poems) and unadorned (we see horses pissing, prostitutes tossed into mud puddles, intimations of rape, and a little light cannibalism) quite like Jarmusch. Indeed, there are more than a few shocking moments, this being the Wild West after all, but there’s a deliberate, almost elegiac ambiance that seems more Ingmar Bergman than Sergio Leone. 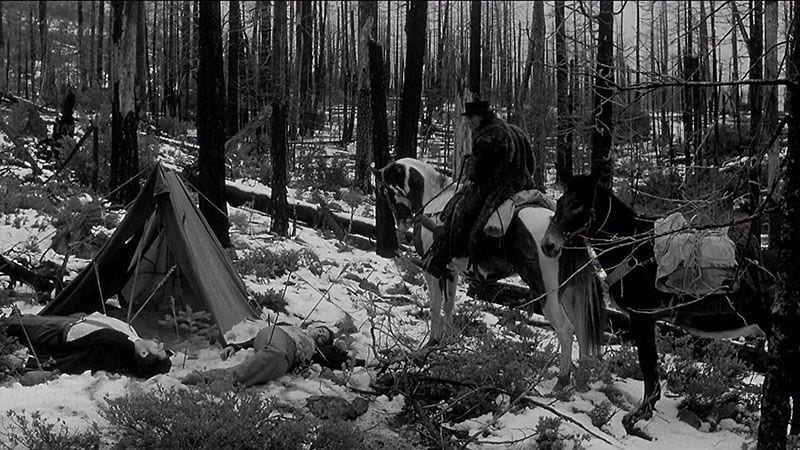 It seemed then, and still does now, audacious that Jarmusch had the wherewithal to try his hand at a project to demystify (or, re-mystify) the he-man formulas that virtually all westerns are, by definition, obliged to prescribe to. Where much of his work, before and since, has a welcome air of improvisation and intentional messiness to it, Dead Man is admirably focused, with a discipline extending to everything from dialogue to specific shots, which cover the trek west, then northward. On a purely visual level, the film rewards multiple viewings, which is even more of an achievement considering Jarmusch decided to render these bucolic vistas entirely in black and white.

It’s not enough to describe Dead Man as simply an anti-western; it’s an iconoclastic deconstruction of late 19th Century American values and mores, many of which remain unabated more than a century later. There’s scarcely a symbol or sacred cow that does not become fair game: from the town of Machine, its bustling but soulless productivity a succinct commentary on the myriad backs broken to build America as an eventual world power; to the Dickensian office manager—John Hurt, like much of the star-laden cast, making the absolute most of his limited screen time—who is, like seemingly every office manager, at once officious and imperious; to the names and backstories of the protagonists, Depp’s William Blake (ignorant of his namesake’s work) and Gary Farmer’s Nobody (the Native American who knows enough for both of them—about literature and life); to the casually immoral mercenaries tracking Blake—providing potshots for all manner of lawful, lawless, and religious authority figures. 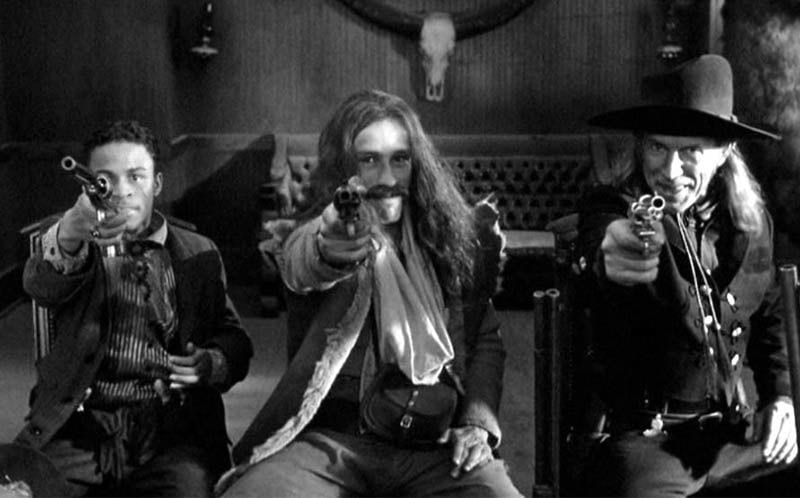 The plot works surprisingly well as a straightforward narrative (stranger in town gets in trouble, goes on the run, has adventures and epiphanies, etc.) or on metaphorical levels: Blake is the anti-hero, his interactions are random yet indelible, and his journey is about as anti-climactic and subdued as you can imagine a shoot-out to be, witnessed by Blake as he floats into the ever after.

Of course, this being a Jarmusch joint, it’s the surreal, silly moments—and in Dead Man, there are too many to count—that make the movie so enjoyable, and lighten what is, at times, intense viewing. The interactions between Iggy Pop (as Salvatore ‘Sally’ Jenko) and then-unknown Billy Bob Thornton (as Big George Drakoulious) manage to be endearing, amusing, and deeply disturbing; the yin-yang of blabbermouth bounty hunter Conway Twill (Michael Wincott) and taciturn Cole Wilson (Lance Henriksen)( both doing career-best work) leads to an obvious, if still-shocking display of conflict resolution; the cameos from heavy hitters like Gabriel Byrne, Alfred Molina, Robert Mitchum (his last role), and especially weirdo extraordinaire Crispin Glover (as Train Fireman), all elevate the proceedings considerably, and Jarmusch deserves major kudos for having the vision (and luck) to find the ideal people for each role. Once seen, it’s impossible to imagine any actor but Depp—with his trademark reticence and subtle charisma—owning the role of Blake. Or, it’s painful to consider how many other A-List actors would have chewed scenery and unwittingly delivered a half-assed Eastwood pastiche. 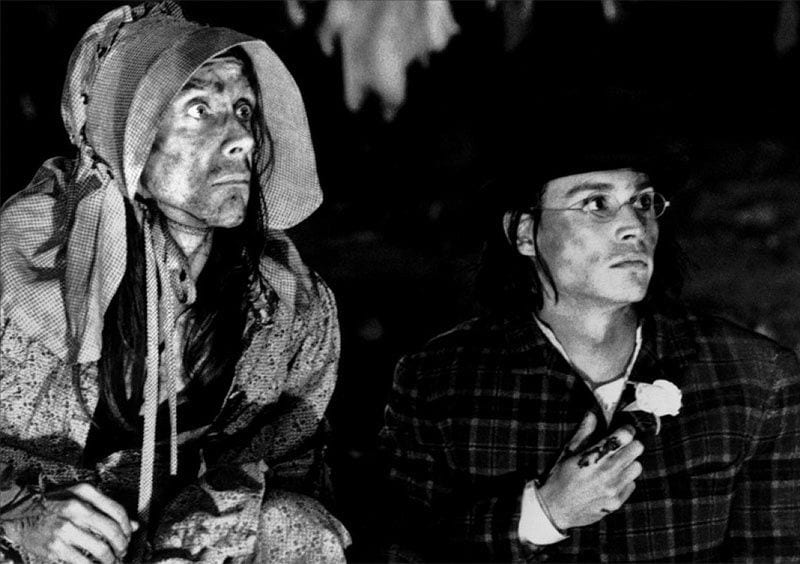 The secret ingredient of Dead Man (and, for the most part, Jarmusch’s career) is the utter lack of cynicism. There’s tons of irony, dark humor, and comeuppance, but it’s all in the service of depicting a still-young country marinating in violence, exploitation, and the frontier justice where might makes right and money is, of course, the root of evil. Jarmusch pokes these hackneyed—yet incontrovertible—touchstones of Americana with a cattle prod, but without judgment. There’s also a refreshing lack of in-your-face identity politics: when, for example, the oleaginous trading post-missionary offers Nobody a blanket they both know is infested with smallpox, or a group of heavily armed men open fire—from a moving train—on buffalo for sport. It says more than any politically-correct academic screed ever could.

This being the Criterion edition, extra features abound and they’re all welcome. In addition to the digital restoration—making the stark but stately images of one-horse towns, forests, rivers, and empty prairies at night almost transcendent—there are deleted scenes (many of which testify to Jarmusch’s excellent editorial judgment), commentaries, and epic footage of Neil Young recording the soundtrack. In the decades since Dead Man was released, Jarmusch has lost none of his eccentricity, but has also ascended to éminence grise status: it took vision—and nerve—to let an unsupervised Young handle the score. In typical fashion for both Jarmusch and Young, the soundtrack was and remains divisive: some people don’t care for it, and others (like this writer), believe it’s not only wonderful, but works nicely as a standalone document.

As always, with fancy reissues of famous or neglected films, the Criterion treatment is a treat for fans, and hopefully will inspire some open-minded viewers to check it out for the first time. Dead Man is certain to endure as, at worst, a curio for aficionados, but it deserves more, and should be celebrated as some of the finest work Jarmusch and Depp have done thus far in their careers.