“I feel like a young chap in love for the first time,” reported Laurence Olivier to Arthur Miller as he set about directing The Crucible in 1965. (The correspondence is included in Daniel Rosenthal’s Dramatic Exchanges: Lives and Letters of the National Theatre.)The British love affair with Miller’s work has endured since then, as the playwright himself acknowledged in 2001 when, receiving an award for Broken Glass, he expressed his gratitude to the UK for “a certain warmth and welcome that has never failed me.”

Now, with Rachel Chakin’s production of The American Clock recently closed at the Old Vic, Jeremy Herrin’s staging of All My Sons replacing it, and Marianne Elliott and Miranda Cromwell’s Death of a Salesman just opened at the Young Vic, The Cut in Southwark could justifiably rename itself “Miller Avenue”. The turn to the playwright at this particular cultural moment must have something to do with the moral seriousness of Miller’s drama — what director Dominic Dromgoole has called the “incredible gravity” that runs throughout “every instant” of the early plays. And, more specifically, it’s surely connected to a current widespread questioning of American ideals. As Joseph Mydell put it in an interview with PopMatters about Death of a Salesman last month: “I wonder if a Trump America makes us want to look at the American dream afresh and see it perhaps more as a nightmare which Americans can’t awake from.”

The notion of the American dream as nightmare offers a key to Elliott and Cromwell’s production, which, with Mydell taking the ghostly role of the protagonist’s brother Ben, makes the Lomans an African American family living out a precarious, deception-fuelled existence in ’40s Brooklyn. This is not, in fact, the first staging to shift the ethnicity of the characters: Charles S. Dutton played Willy in 2009, while Don Warrington took on the role in a Manchester production just last year. However, in a time of increased focus on diversity in theatre and debate about the politics of casting, the decision seems an especially charged one. “We’re not changing a word [of the text], but it is amazing how you hear it differently. It’s like a new play,” Elliott has claimed, while Cromwell suggests: “The American dream feels that much further away through this lens . . . It’s like making the pot really hot.” (“How do two Arthur Miller plays change when you alter the characters’ ethnicity?” by Sarah Hemming, 1 Feb 2019, Financial Times)

Generous critical responses to the show, mostly given by white writers perhaps over-eager to show their empathy for another story of black victimhood, take Elliott and Cromwell at their word. As it turns out, it’s more accurate to say that making the Lomans a black family only fitfully illuminates the play. The physical recoil of Willy’s white boss (Matthew Seadon-Young) as he pleads for his job renders this always-powerful scene especially upsetting, while the use of the word “Boy” at several moments suggests an internalising of racist discourse.

What’s lacking, though, is the sense of a deeply felt throughline. Is it significant, for instance, that The Woman (Maggie Service) with whom Willy betrays Linda is white, while his son Happy courts black women? What is the family’s background and how do they fit in with their white neighbours? The production doesn’t give us too much of a clue. The sketchiness of aspects of the context make it easy to feel sympathy with August Wilson’s concerns about such a project: “To mount an all-black production of a Death of a Salesman or any other play conceived for white actors as an investigation of the human condition through the specifics of white culture,” Wilson said, “is to deny us our own humanity, our own history, and the need to make our own investigations from the cultural ground on which we stand as black Americans.” (“Hard Sell“, by John Lahr, The New Yorker, 18 May 2009)

As with Elliott’s recent gender-flipped production of Stephen Sondheim’s Company (National Theatre) in which Bobby became Bobbie, a single girl incarnated by an ever-watchful Rosalie Craig, an opportunity for a more radical interrogation of the material seems to have been sacrificed, then. Elliott’s greatest productions — War Horse, The Light Princess, All’s Well That Ends Well, The Curious Incident of the Dog in the Night-time –– have combined an immersive epic scope with a wonderful emotional clarity and accessibility. There’s an element of constraint to her recent work, as if the recourse to a single overarching idea – Bobby as Bobbie, an African American Loman family – had somehow sapped rather than spurred her creative imagination.

That may explain why some elements in Elliott and Cromwell’s Death of a Salesman feel slightly perfunctory, yielding less impact than they should. The production’s engagement with Willy’s psychological state – the fact that events are occurring, as Miller’s original title had it, on “the inside of his head” – has been widely praised. Yet, the movements between past and present – complete with stylised slo-mo gestures and a hokey “winding back” sound effect – have a mechanical air rather than the required fluidity. (That fluidity is achieved only once, in a great moment when a nightclub patron morphs into The Woman.)

Similarly, while Anna Fleischle’s design keeps faith with Miller’s stipulation of a “fragile-seeming home” by tentatively lowering and raising the fixtures of the Loman house to suggest Willy’s disordered reality, the opportunity for something much more disturbing, dynamic and expressionistic is missed. Further, music director Femi Temovo’s augmentation of the production with African American music traditions – bluesy guitar, spiritual bookends, even “I Loves You Porgy” in the interval – is heavy-handed, to say the least. 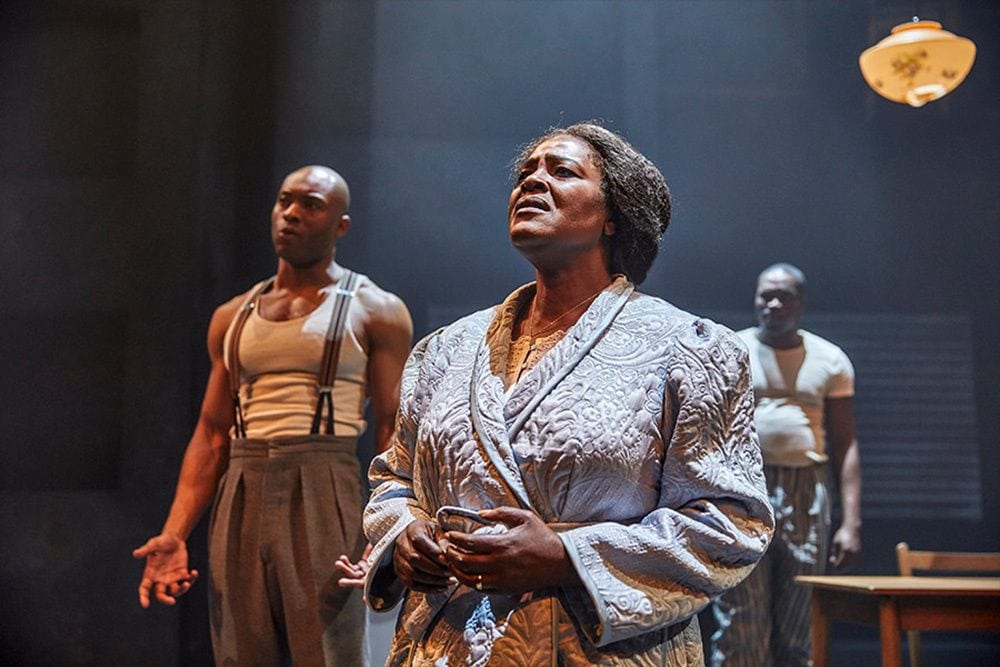 Those complaints registered, this Death of a Salesman still has a good deal to offer audiences. Mostly, it has its performers. Wendell Pierce, known to TV viewers from HBO’s The Wire and USA Network’s Suits, seems too hearty and robust a presence at the start – hardly the exhausted figure of Miller’s first description. However, as the evening progresses, the performance deepens, and Pierce digs into the pride, guilt and sense of failure of a man who still feels “temporary about himself”. His reaction to Bernard (Ian Bonar)’s questioning about the pivotal incident in Boston – with shame and pain at the memory morphing into angry defensiveness – is peerlessly affecting. The performance adds up to a haunting portrait of a man’s disintegration.

An urbane spectre in a white suit, Mydell is marvellous as brother Ben, creating an opposite type to Pierce, as he emerges through the stalls with tales of riches procured in Alaska and Africa; this fantasy figure is at once his brother’s encourager and tormentor here.

Her face lit with love and concern, Sharon D. Clarke (fresh from her Olivier Award winning success in Tony Kushner and Jeanine Tesori’s magnificent Caroline, or Change, Hampstead Theatre) modulates beautifully in what is often (unfairly) viewed as a thankless role; her low, quietly expressive voice cuts through the sentimentality of some of Linda’s lines, and she makes the most of the confrontations with the sons, strongly characterised by Arinzé Kene and Martins Inhangbe. What doesn’t work, unfortunately, are the musical interludes she’s given (especially the concluding one): it’s great to hear Clarke sing, but not here; this Linda turns out to be such an accomplished vocalist that she’d surely be out on the road earning the family’s living herself. Perhaps Elliott and Cromwell have a sequel in mind: Birth of a Blueswoman?

So accomplished are the cast at making us feel the intermingled ties of love and disappointment that connect and sever the family, that the strongest moments of the evening are those when the under-developed conception falls away and we’re simply given the play as a straightforward domestic tragedy about the thwarted expectations and hopes that we have for ourselves and our loved ones. Compelling but not quite revelatory, this Death of a Salesman is a rarity for Elliott: a production that’s at its most potent when at its plainest.