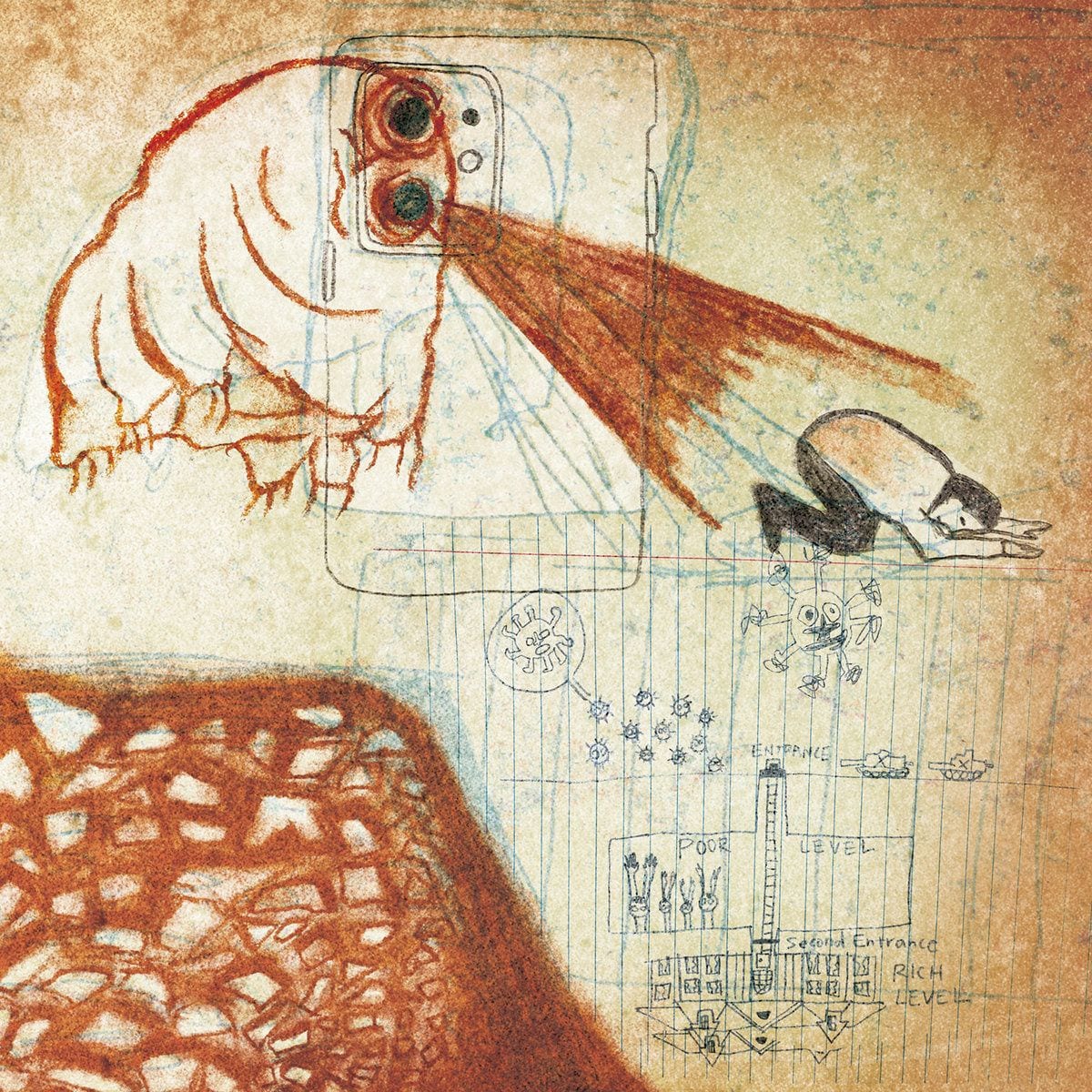 “It is possible that I will be ejected from Deerhoof for saying this,” Deerhoof’s Greg Saunier tells us. “And if that happens I will certainly blame PopMatters. But a big influence for my efforts on [Future Teenage Cave Artists] was St. Anger by Metallica.”

I am prepared to be blamed for the unfortunate breakup of Deerhoof, or at least for Saunier’s firing (though dismissing the virtuoso drummer from the band will effectively, in the eyes of most fans, signal the end of Deerhoof). I find it hilarious that Saunier’s inspiration for the band’s latest LP of polychromatic noise-rock was inspired by a divisive Metallica album that received a 0.8 from Pitchfork, though I’m also unsurprised.

It’s safe to say that, over 15 albums and 26 years of playing music together, Deerhoof has built quite a legacy. One facet of this legacy is their willingness to absorb various musical styles culled from an extensive record collection, transmitting sounds that reflect the myriad contradictions of compulsive music fandom. It’s worth watching Saunier’s episode of Amoeba Records’ interview series “What’s In My Bag”, which shows him discussing an album by the Democratic Republic of the Congo afro-pop band Konono Nº1, a two-disc compilation titled Drums of India, a performance by classical composer Morton Feldman, and live DVDs of the Who and the Rolling Stones. Most musicians featured on the series have eclectic tastes, but few bands can soak up influences this diverse and distill them organically into a sound that’s more than the sum of its seemingly dissimilar parts.

In a 2019 Bandwagon feature on Deerhoof, writer Indran Paramasivam accurately summarized this quality, calling the band “genre-agnostic.” The term rings true because is sets them outside of genre demarcations even while they’re trying on different styles (whereas, by contrast, an artist like Beck would be more like a genre trollop.)

The genre-agnosticism is apparent on Future Teenage Cave Artists, their latest album. Deerhoof flirts with everything from garage rock (“Sympathy for the Baby Boo”) to math-rock discombobulation (“O Ye Saddle Babes”) to a high-speed car-chase score with gravel-crusted guitar tones (“Zazeet”) to slow-groove R&B (“Fraction Anthem”) to a Bach composition (“I Call On Thee”), all while keeping with the album’s sandy tone coloring and apocalyptic soundscape. Yet no matter how many genres Saunier and company pilfer, they inevitably make a Deerhoof record.

In the case of Future Teenage Cave Artists, the secret to thematic cohesion may lie in the band’s long-distance collaborative process.

“We all live in different cities,” Saunier says, “and each of us wrote songs and recorded rough demos of song ideas on our little home-recording setups. We emailed demos to each other, and sometimes we’d get attached to something magic happening in the rough demos. So then somebody would overdub an idea on that mp3 and mail back another mp3, or use one section of their demo but have it splice to something else. That really happened a lot on [Future Teenage Cave Artists]. All these unfinished fragments started to feel like they wanted to be left like that, not re-recorded with proper equipment and techniques.

“The process of making the record, however accidental, started to turn into the theme of the record,” Saunier says. “It started to become the lyrics, and the artwork.”

Since a Deerhoof album resembles a cross-stitching of various genres, it’s fitting that the band’s recording process is essentially a long-distance game of cut-and-paste. However, the album’s two-year gestation period seems an awful long time for a band that sounds so spontaneous on record.

This leads to the second aspect of Deerhoof’s legacy: they have been making consistently solid records for over two decades. There may not be another 21st-century rock band as prolific and enduring. (The only possible exception I can think of is Radiohead, and it’s worth noting here that Thom Yorke is a Deerhoof fan.) The band’s creative freedom, and lack of any apparent formula to wear thin, seems to be the key to trading in late-career sonic dilution for ceaseless experimentation.

Listening to Deerhoof in 2020 brings to mind Robert Christgau’s review of Sonic Youth’s 2009 album The Eternal, in which he asks readers to “consider the Rolling Stones, a/k/a the world’s greatest rock and roll band, who 25 years after their first album bestowed upon us the immortal Steel Wheels.” It’s a joke, of course: Steel Wheels is forgettable (did you even know the Stones released an album in 1989?), and Christgau contrasts this late-career blasé with Sonic Youth’s “much more fun” 25th anniversary record. Deerhoof released their debut album, Dirt Pirate Creed, 24 years ago and they are still flinging auditory confetti with the fervor of eight-year-olds at a birthday bash.

That said, their latest record is one of their bleakest statements, featuring lyrical themes of death, apocalypse and revolution. The title track follows a group of vandals who paint the walls of their dystopian future caves and vow to tarnish traditions, dissect opinions, and reform religions.

“I can’t totally explain the meaning of the song in words because part of the meaning comes from the melody and the chords and the production,” Saunier says. “But it is about dissent.”

“Of course we had no way of knowing when we made the song that there would be nationwide Black Lives Matter protests taking place on the day the record was released. But it is always true that if we like things like the right to life, liberty, and the pursuit of happiness, we have the work of rule-breaking, anti-authoritarian rebels to thank. If we want to still have those rights in future, we have to become accomplices to the rule-breaking, anti-authoritarian rebels of now … in an unjust and panicked system, dissenters and rioters are considered criminals. But to whatever extent we can succeed in organizing ourselves in a better way, the future will thank us.”

Stylistically, the band’s “genre-agnostic” tendencies mirror what culture critic Simon Reynolds calls, in his book Retromania, our age of “hyper-stasis,” a term that “describes situations in which potent musical intellects engage in a restless shuttling back and forth within a grid-space of influences and sources, striving frenetically to locate exit routes to the beyond.” Reynolds believes this trend in current music parallels our hyperactive, internet-crazed culture. From this perspective, Deerhoof’s music (obsessed with style-hopping, recorded at home into MP3s, transmitted via email, constructed by people living far away who don’t have to meet up in-person) exemplifies this cultural trend to the point where their art could appear almost prototypical of the era. Similarly, the dissent of “Future Teenage Cave Artists” might be understood by future audiences as a window into a moment in American history when longstanding conventions needed to be uprooted.

That might be a stretch. It probably is. Regardless, at this point in their career, it feels apt to discuss the legacy of Deerhoof if only as a way of arguing that they’re deserving of one.

At the risk of undermining this entire piece, it’s worth noting that Saunier isn’t worrying about the legacy of his band.

“It’s not really where my head’s at,” Saunier says. “I have no expectation of being remembered years from now, for stuff about genres, or for anything else. I don’t really anticipate that the music industry will even exist as we know it now, or that people trying to figure out how to survive in the future will necessarily be worrying about indie rock CDs from decades before. It’s really not so hard to imagine a situation where the takeover of music distribution by corporate middlemen becomes so extreme, the attempt to create the feeling that you’re missing out on life if you haven’t heard such-and-such band, becomes so irritating, that human beings just get fed up and sing around their campfires instead, and are satisfied with that. And that’d be awesome.”

“But if some future generation is able to listen to our recordings and take something from it,” he adds, “I hope it’s, ‘Do your thing, be yourself.'”