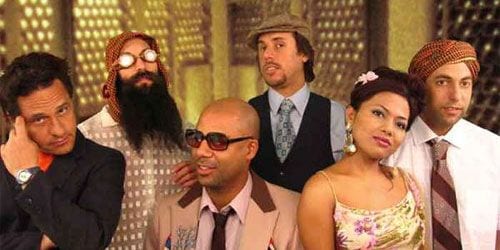 On April 17, 1975, Pol Pot’s Khmer Rouge took over the Cambodian capital Phnom Penh and forcibly removed all artists including musicians to the countryside, banning them from playing popular music or worse. Among the many losses were singer-songwriters such as the “Golden Voice of the Royal Capital” Ros Sereysothea and the “King of Khmer Music” Sinn Sisamouth (both missing and assumed dead), household names whose heady cocktail of reverberating surf-rock, garage psychedelia and Cambodian folk was once heard everywhere from National radio to the cafés and record shops lining the dirt roads. It took almost 30 years for a group of Californians fronted by charismatic singer Chhom Nimol, a Cambodian-born Long Beach resident, to reintroduce her homeland (and introduce the rest of us) to music inspired by U.S. Armed Forces radio during the Vietnam war.

“We played in a shantytown, on an outdoor stage lit by old car lights, to 800 locals. We felt like space aliens coming out from a spaceship. It was one of the most gratifying experiences to have.” That’s how Paul Dreux Smith, the drummer and producer with Los-Angeles-based sextet Dengue Fever, described the first time the group took their 1960s-influenced Cambodian rock back to the streets of Phnom Penh in 2005 as part of a tour chronicled in the documentary Sleepwalking Through the Mekong.

Three years on from the band’s exhilarating second album Escape From Dragon House, which brought them the required worldwide exposure to help fulfill their dream journey, Dengue Fever have been honing their skills touring throughout the United States, Canada, and most recently Spain, where they showcased their mesmerizing if slightly mellower follow-up Venus on Earth. Recording in Los Angeles at Phase Four Studios with Jim Putnam (Radar Brothers), founding members the Holtzman brothers, Zac (guitar/vocals) and Ethan (Farsifa), along with Nimol (a star in her own right who sang for the Cambodian Royal Family before traveling to the US), bassist Senon Williams (also of slow-core group Radar Brothers), Smith and saxophonist David Ralicke on horns, the band obviously decided that if the wheel on your rickshaw ain’t broke, don’t fix it. Just add a little more soulful jazz to the reverb-drenched party.

And what a party! Venus on Earth is like being transported through a steamy, humid time warp where Haight-Ashbury was a swinging suburb of Phnom Penh in the ’60s as oscillating Farsifa and fuzztone guitar languidly drift under and around Nimol’s beautifully hypnotic vocals. When she sings in Khmer (although her sexy-accented English is becoming more common) the emotional phrasing in her voice misleads you into thinking, on songs like the wistfully melancholic “Monsoon of Perfume”, that somehow a Babel fish has slipped into your ear and made Khmer your second language (well, almost).

With the opening number “Seeing Hands” and the excellent “Tiger Phone Card”, a romantic long distance duet between Holtzman and Nimol, following closely on from the exuberant psych-surf ‘n’ roll of previous outings (“Sni Bong” taken from Dragon House readily comes to mind), there’s plenty of opportunity to ride the wave of spicy danceability. However, the group are at their best when they spread their improvised wings to morph into lounge lizards. On “Sober Driver”, Nimol emerges as a perfect torch singer, attempting to seduce Holtzman and managing to seduce the audience with her sorrowful late-night drawl, while Ralicke is given room, here and on the echoing Barry-Gray-Orchestra-styled instrumental “Oceans of Venus”, to blow solo and sweet. This transcends the sometimes dubious genre of world music in every sense.