Arthur Conan Doyle’s famous Sherlock Holmes novel, The Hound of the Baskervilles, has been filmed more than 20 times. As a boon for Sherlockians and silent film fans, Flicker Alley presents Der Hund von Baskerville, a DVD/Blu-ray combo containing two silent German versions. For fans of the great detective, these versions will be most instructive for how they choose to stray from the original material. For fans of silent cinema, they’re simply an unexpected treat.

The disc presents the 1929 version as the main attraction and relegates the 1914 version to a bonus. Both films run the same length, about 65 minutes, and are in roughly the same shape, and we find it convenient to discuss them chronologically, especially since they’re linked by a shared artist.

The 1914 version opens by showing us poses of the writer, Richard Oswald, and the director, Rudolf Meinert. Clearly this production is proud of them and wants to show them off. The most fascinating figure of the two is Oswald, who in fact will direct the 1929 version and who already had much background in this material. According to Wikipedia, quoting from Alan Barnes’ Sherlock Holmes on Screen (Titan Books, updated ed. 2002), Oswald had directed a 1907 stage version (the disc’s booklet says 1906) subtitled as being freely adapted from Doyle and Poe. In other words, Oswald already had experience distorting Doyle’s book to meet the needs of other media.

I assert that Oswald was among the architects of Expressionism in German theatre and film, although I can’t prove this due to the lack of availability of most of his films. Nevertheless, this style of bending the set design, lighting and other plastic qualities of cinema to reflect the characters’ psychological states began to flourish just as Oswald founded his company and began turning out such titles as Tales of Hoffmann, A Night of Horror and The Uncanny House (all 1916), followed by The Picture of Dorian Gray (1917) and the 1919 productions of Peer Gynt and the horror anthology Unheimliche Geschischten (or “Uncanny Tales”).

Just to look over the credits of Oswald’s films is to be stunned by the names of future directors providing collaboration, such as E.A. Dupont, Arthur Robison and Lupu Pick, not to mention major actors and technicians. Richard Oswald and his son, Gerd Oswald, who also made highly expressive films and worked mainly in American TV, are as important a pair of European father-son artists who spanned the silent and talkie eras as Maurice and Jacques Tourneur, and critical appreciation has yet to serve them their due.

But Oswald didn’t direct the 1914 version. Rudolf Meinert directs in the “primitive” four-square style common to early features, only moving the camera slightly and almost avoiding close-ups, yet staging the scenes picturesquely and with depth. One huge exception is the introduction of Holmes (Alwin Neuß), in which a newspaper is pulled away to reveal a startlingly Expressionist close-up, half in grotesque shadow, of the great detective. This moment is so out of keeping with the rest of the film that we must wonder if perhaps Meinert received input from Oswald. More Expressionist delirium returns at Holmes’ climactic underground encounter with the hound.

As for the story, Sherlockians will barely recognize it. As mystery buffs know, the Baskerville estate is haunted by a legend that a ghostly hound presages the death of the current lord. When the current holder of the title dies under mysterious circumstances, Sherlock Holmes investigates on behalf of the new heir, Lord Henry. First he sends Dr. Watson (played by an uncredited actor) ahead of him to inhabit the Baskerville estate and go wandering around the moors. Eventually, the novel pulls off a big reveal that’s easier on the page than the screen: it turns out that Holmes has been masquerading as another character. There’s also some business about an escaped convict before the guilty party is unmasked.

The 1914 film throws most of this out the window. The plot has no interest in mystery, for the guilty party is exposed to the viewer almost as soon as the character walks onscreen. In the style of barnstorming Victorian melodrama, the bad guy (Friedrich Kühne) begins glancing at the fourth wall, shaking his fist and explaining his dastardly plans. Conveniently, he writes it all down in a diary, which the detective will discover.

Our baddie is the one who turns out to be a master of disguise, and he disguises himself as Sherlock Holmes! The sheer audacity of this conceit takes our breath away, although it does expand upon a minor incident in the book. Here, the film is clearly indebted to Louis Feuillade’s Fantomas (1913), a serial centering on the machinations of a villainous master of disguise.

The film continues to evoke contemporary shadows of Feuillade and to anticipate Germany’s own crime dramas about Dr. Mabuse and other master criminals. In the scene introducing Holmes, who’s amused to read in the papers that he’s currently at the Baskerville estate, he summons Dr. Watson via some bizarre futuristic apparatus that spells out a summons in lights (“Come to me, Watson” — shades of Alexander Graham Bell) before the latter joins him via hidden elevator in the house! This rather elderly Watson never appears again.

The film follows the Feuillade technique of presenting the villain’s various plans as Holmes manages to foil them in serial-like suspense. At no point does Holmes use any deductive powers, since everything is explained to him by butler Barrymore (Andreas Von Horn). Instead, he cuts a proto-James Bond figure who, for example, spots a bomb in the chandelier (with clever mirror staging), announces the castle is about to be blown sky-high in 20 seconds, asks if anyone has a light, takes out a revolver, blows off the fuse, and uses it to light his cigarette. (Don’t try this at home.) We’ll next expect him to request a martini shaken, not stirred.

By the time we get to a bust of Napoleon with human eyes (thus making a link between this villain and Professor Moriarty, “the Napoleon of crime”) and trapdoors into underground chambers, the film has gone full Feuillade and indulges the sort of calmly presented nonsense that so delighted the French Surrealists.

Despite the film’s only tenuous connections to the novel, Doyle’s creation lends itself to such surrealism, for this and many Holmes tales depend on a demonic tension between the supernatural in which Holmes doesn’t believe and Doyle does. I quote Martin Seymour-Smith in The New Guide to Modern World Literature (Peter Bedrick Books; Revised, 1985): “Holmes is the dream-paradigm of the brilliant decadent, cunningly written from a non-decadent point of view; it transcends most of the decadent literature of its time. Holmes, really a dope fiend, is his own great enemy Moriarty: he is the supreme criminal in the eyes of his time, but politely presented, and that is why people love him. There is no emphasis on virtue in these essentially diabolical tales. But Conan Doyle did not know that.”

Hermann Warm designed the sets, a function he’d provide more famously and radically on Robert Wiene’s The Cabinet of Dr. Caligari (1920), with Meinert as production manager. The photographer is Karl Freund, many years before his work in F.W. Murnau’s The Last Laugh (1924), Fritz Lang’s Metropolis (1927) and Tod Browning’s Dracula (1931). No wonder this thing still looks so good.

Although the Baskerville mystery is solved, this film jumped on the serial bandwagon and promptly starred its hero in several sequels, two of which were directed by Oswald. It would be nice to see them, if they exist. This film was considered lost until a print was discovered at Gosfilmofond in Moscow. It’s been tinted and restored as much as possible.

Now we move to the 1929 version, directed by Oswald. If the 1914 incarnation adapted the tale to the style of the day’s serial thrillers, the 1929 version is pure “Old Dark House”, its era’s primary form of spooky melodrama. Although Holmes’ masquerade is dispensed with, most of the characters and the general outline of the original story remain, save that the emphasis is always on the “haunted” house and environs, which now come complete with secret passages, sculptures with moving eyes (remember that Napoleon?) and all such Gothic bric-a-brac. It even throws in an extra murder in a hidden room while the grinning villain peers through the skylight.

What matters here is Oswald’s direction, which foregrounds expressive techniques from the opening glorious 360 degree pan around a lightning-flashed mausoleum of a mansion until we arrive at the exquisitely composed duffers seated before the fire. The camera almost never stops moving, except when it pauses to savor another strikingly lit composition, either from an odd angle or with a mixture of foreground and background detail. 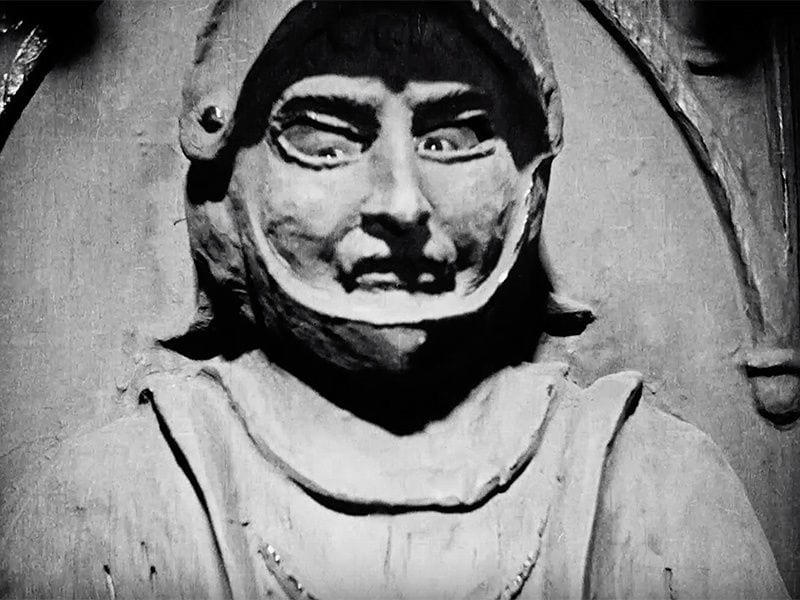 When the butler Barrymore (Valy Arnheim) enters a scene, for example, we get a shadow-laden close-up from under his chin. When Holmes (Carlyle Blackwell) discovers that the eyes of a decorative figure are hollow and lead to a secret passage, he does so via the device of his pipe’s smoke wafting in close-up through the empty eyes. While the story sometimes comes across as clunky, the direction never does. Although Meinert’s version had its charms, Oswald provides a more vivid and fluid experience.

George Seroff plays Dr. Watson, and a Sherlockian scholar in one of the extras asserts that this is the earliest Holmes film which centered on his relationship with Watson. He shows himself a bit dense, thus anticipating Nigel Bruce’s portrayal in the Basil Rathbone series. In one scene, he’s in bed reading Edgar Wallace’s The Traitor’s Gate (1927), which establishes the firmly contemporary nature of this film — another quality the Rathbone series would adopt after its first two installments.

This 2018 restoration combines a 35mm print discovered in a Polish archive and a notably more deteriorated 9.5mm French print. Much of reels two and three are missing, and that part of the story is reconstructed with summaries and stills. Nothing has been tinted. Both films are appropriately scored.

Let’s close on these remarks in the booklet from Stefan Drössler, director of Munich’s Film Museum, pertaining to the 2005 restoration of the 1914 version. He states that this movie is one of a long line of German films from the 1910s to have been restored in the last 20 years.

“Many of them had been missing believed lost, or simply fallen into disregard… The writings of historians such as Siegfried Kracauer or Lotte Eisner categorized everything that came before Caligari as artistically irrelevant, allowing only for extremely rare exceptions… A lot of effort from archives and film historians will have to go into the reappraisal of the era that might be the most crucial for the development of German film… The films of a great many directors… have sunken into oblivion, yet those were the days when notable filmmakers such as F.W. Murnau, Ernst Lubitsch, Fritz Lang or Richard Oswald began their ascent. Even though we must assume that most films of the 1910s are lost, astounding discoveries are waiting to be made in collections and archives.”

It’s nice that he mentions Oswald in the same breath with the more celebrated filmmakers, because he probably deserves it. That line about the long line of restorations is especially mouth-watering, and if projects like this lovingly assembled edition of two versions of Der Hund von Baskerville take off, we can hope that more discoveries will fall into our hands, perhaps even more Oswalds. 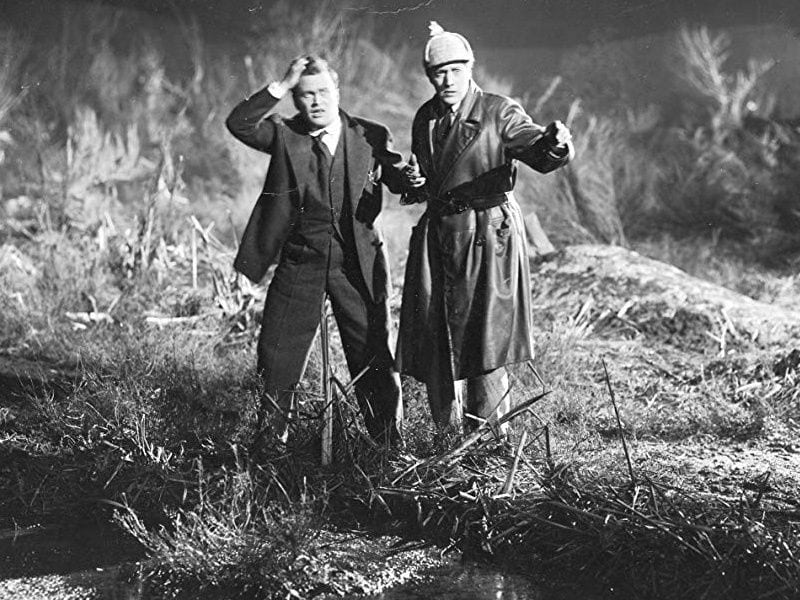