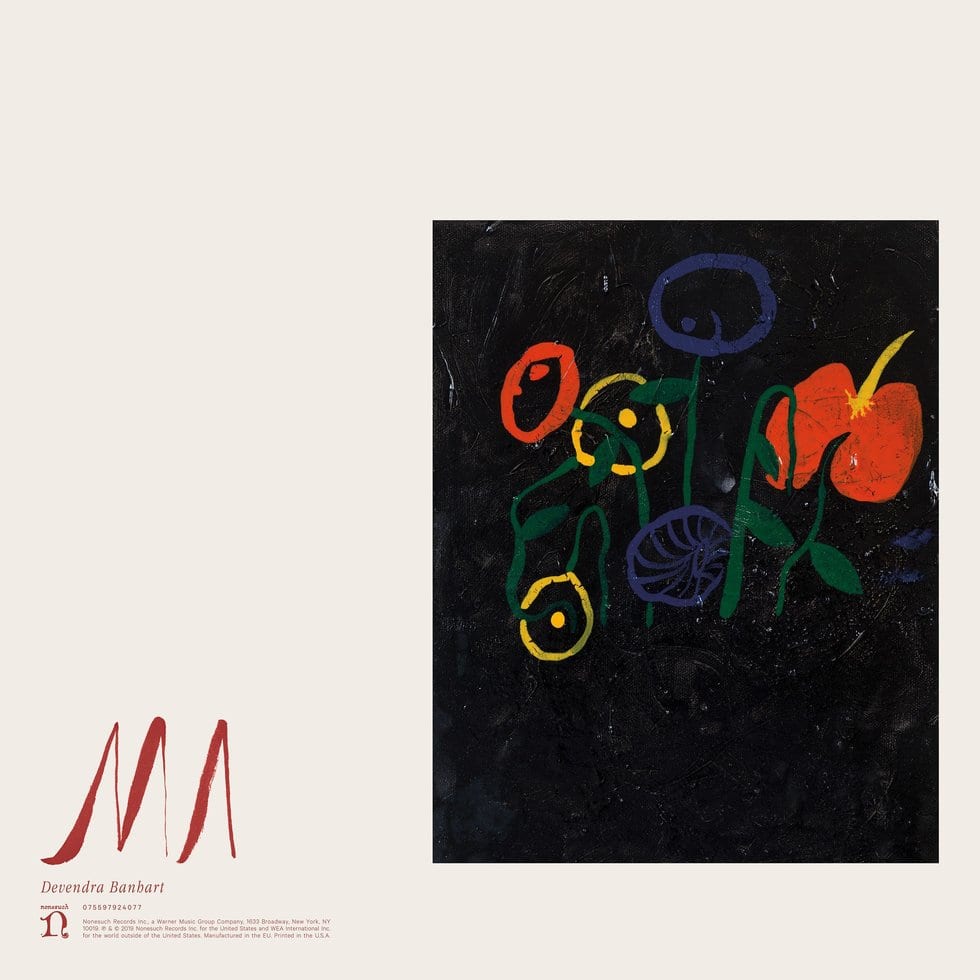 Devendra Banhart’s latest album, Ma, is a tender, beautiful meditation on the bonds that ties us together. While the title explicitly refers to motherhood, and several of the tracks specifically addresses such a person, Banhart’s concerns are more idiosyncratic and spiritual. A mother could be a father or a son, a planet, or a god. His imagination is limitless in the best sense and extends from one to one connections to being part of the cosmos.

Banhart eschews the synthesizers of his more recent albums in favor of his guitar and vocals abetted by strings, woodwinds, brass, and keyboards. The organic sophistication of the instrumentation purposely recalls the work of Burt Bacharach, Harry Nillson, and Leonard Cohen. For example, the horn and rhythm section on his “Love Song” drenches its transcendental lyrics (i.e., “stars are just reminders of us living underground”) in the sunny California sound Bacharach made famous during the 1960s.

The opening cut “Is This Nice” echoes Nillson’s playful spirit (i.e., “Is this nice? / do you like it?) before connecting to Nillson’s biggest fan, John Lennon with a repeated chorus of “beautiful boy”. “Memorial” which contains the details about the death of his father and two of his friends, steals its music from a pastiche of Cohen’s work. In all of these cases, Banhart uses these intertextual references to add depth to his topics by suggesting the subjects of love, life, and death have a timeless universality that creative artists continually address.

The referential touches are also playful. On “Taking a Page” Banhart explicitly calls out Carole King by name and says he’s stealing her “So Far Away” to express his feelings in a manner analogous to “wearing a free Tibet shirt that’s made in China”. That’s before comparing love to “crowd surfing in an empty club” and admitting “words tend to mean the most in songs that are just music”. He then absurdly asks, “do you ever think that colors say hey, who’s your favorite human?”. The verbal convolutions down the rabbit hole of logic are the point of having no point. He’s having fun with the twists and turns. While many of the songs on Ma offer serious meditations about what life is all about, Banhart understands the importance of both joy and pain.

There is an international flavor to the proceedings. Welsh singer-songwriter Cate Le Bon sings background vocals on “Now All Gone” and English folkie Vashti Bunyan duets with him on “Will I See You Tonight”. The American born singer-songwriter Banhart spent most of his childhood in Venezuela and three of the tracks are in Spanish, one in Portuguese, and one partially in Japanese (“Kantori Ongaku”). He conveys the universality of human experience in different languages as a way of making a point, but he also understands the importance of the particulars.

Banhart has close relatives in Venezuela and has raised money for medicines to be brought into the country but which was stopped by the national police. For his autumn tour in support of this album, he’s partnered with PLUS1 so that $1 from every ticket sold in the U.S. will go to World Central Kitchen (WCK), an organization that fights world hunger. WCK Colombia-Venezuelan border and has served more than 350,000 meals to date to those on the Columbia-Venezuela border.

“What was that thing you said when nobody spoke,” Banhart croons. The beauty of these songs lies in their ability to conjure up subconscious thoughts and feelings just below the surface. He continues, “You must give up control / in order to win”, and that serves as a key insight into what makes his music special. Banhart conjures rather than prescribes. The rest is up to us.