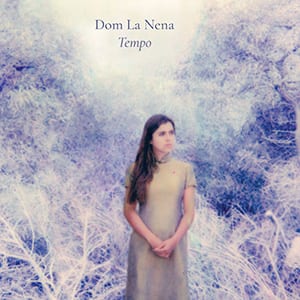 It should come as no surprise that cellist and singer-songwriter Dominique Pinto – better known under her working name of Dom La Nena – has the air of a classic chanteuse about her work. At the age of 18, she traveled the world backing Jane Birkin and Jeanne Moreau and today makes music in Paris, one of several places she has called home for long spells. Born in Porto Alegre, Pinto has also spent time living in Buenos Aires, studying cello under Christine Walevska through her teens until her eventual relocation to France. On her new album Tempo, the geographic lengths to which she has gone to hone her skills continue to pay off as she crafts some of her most sophisticated songs to date.

The Dom La Nena sound has always been one predicated on the value of speaking softly, literally, and metaphorically. Pinto sings with gentle tones, faux-whispers that are nonetheless bright with melody as they melt into the near-human warmth of layered cello lines and luminous piano flourishes. There’s no rough edge or sharp angle to be found in the mix, though there is still variety, “Tempo” opens the album with its clearest production, featuring classical strings and twinkling keys. The next song, “Oiseau Sauvage”, brings that piano into the forefront but allows it just enough resonance to keep it from being uncharacteristically cutting. Pizzicato lines make up much of the album’s rhythm section, emulating a surf-ballad bassline on forlornly catchy “Todo Tiene Su Fin” and setting the titular meter of the melancholy “Valsa”.

Tempo’s sweeping sounds make it easy to forget how small-scale and self-contained the production truly is. When Julieta Venegas drops in for a duet on “Quien Podrá Saberlo”, it serves as a reminder of how easily a single voice can shift such a delicate soundscape. Even toned down to match Pinto’s relaxed vocals, Venegas brings a heat that makes the track an unexpected standout for its contrasts. In general, though, Dom La Nena’s music is engrossing because it forces the listener to listen and take in subtleties like the electronic high notes and low string fundamentals backing Pinto’s self-harmonies as they swirl into the stratosphere on “Moreno” or the slow heartbeat of minimal percussion sounding in the back of dreamy “Teu Coração”. Tempo is arresting from start to finish because there is so much more to the sweetness than the first surface listen might suggest.

Dom La Nena’s is a tenderness that cannot be mistaken for weakness. On multilingual Tempo, the cosmopolitan experiences of Dominique Pinto’s life thus far come together in musings on the depths of time, no easy task, and leave us with a sense of unsettled bliss. Through sambas laced with saudade, artful chanson-style pop, and other well-crafted compositions, Dom La Nena plays through her pondering, creating imaginative sonic worlds marked by a high level of technical skill and yet utterly accessible on emotional levels, both features that blur boundaries between artist and instrument in ways that make Tempo feel organic even for its polished perfection.