Wheels of the City
The Drunken Hearts

It was barely a year ago when the Drunken Hearts appeared in the early afternoon on the final day of the first (and probably last) Grandoozy festival in Denver, enduring a scorching sun as the last vestiges of summer did their best to hold off the welcoming fall. The show served as a survival test and grand entrance for a Mile High City-based band that knows all about changes, morphing from a trio to a quintet after the unexpected death of their drummer five years ago.

Now in mid-October, as the Front Range of Colorado has already endured a cold snap that featured a 64-degree temperature drop overnight and its first snowstorm strike of the season months before winter officially hits, frontman/lead singer-songwriter/guitarist Andrew McConathy and his beating Hearts are pounding the pavement harder than ever.

The band, whose engaging Grandoozy interview helped land them in my top 18 artists of 2018, also includes Kory Montgomery (guitars, vocals), Cody Russell (pedal and lap steel, dobro), Jon McCartan (bass) and Alex Johnson (drums, replacing the late Ted Welles, who died suddenly in October 2014 at age 34). They bring positive proof of their sturdy existence in the form of Wheels of the City, a pulsating, ambitious, adventurous new record that premieres with the full-length album stream today at PopMatters.

Hear Wheels of the City in its entirety now, then continue reading to learn more about the heavy thinkers and power players behind the album that will be officially released on Friday, 18 October 18 on LoHi Records.

Throughout an 11-song escapade, gutsy listeners might experience any number of thrilling sensations: the beauty of a string section on “Passchendaele”; a vibrant brass attack on “Wheels of the City”, the title cut inspired by Jack Kerouac’s essay “The Vanishing American Hobo”; and a psychedelic bridge on both “Two Hearts (On a Limb)” and “Unrest”, the latter a lively folk tale about a weary man dying to go to sleep.

After they self-produced 2018’s The Prize, the Drunken Hearts decided to go off the beaten track and bring back Railroad Earth’s creative innovator/multi-instrumentalist Tim Carbone to helm their latest project, a long-awaited reunion following 2012’s debut album, Live For Today. Relying on Carbone’s experience and go-for-broke sensibilities was an easy decision for McConathy, a Boulder settler who considers him a friend and mentor since they first met in 2006. Was it time for the Drunken Hearts to get a wake-up call?

“I’m not sure if it was necessarily due to a restless feeling (although I’m not saying that it wasn’t), but the band’s sound has been evolving for a while — from our origins as a bluegrass trio to the full-fledged country-rock thing,” McConathy wrote in an email interview to accompany the premiere.

“As a producer, we definitely put a lot of trust in Tim, but we also wanted these songs to be a departure from our last record to begin with, so it was a nice balance of us wanting to play things a little different and the producer asking us to do so,” added McConathy, who as producer of the Yarmony Music Festival for the past 14 years considers Carbone and Railroad Earth “influential in the development” of the event hosted by the Drunken Hearts.

McConathy initially brought “12 or 13” demos to Carbone, including previously written but never released songs of his such as “Unrest”, “Passchendaele”, and “In the Middle”. Throwing out the ones that “either didn’t fit with the rest or still needed some work”, they settled on 11 songs (including two instrumentals) for the record “that we would tackle on the fly (one I would add words to on the spot),” McConathy added. 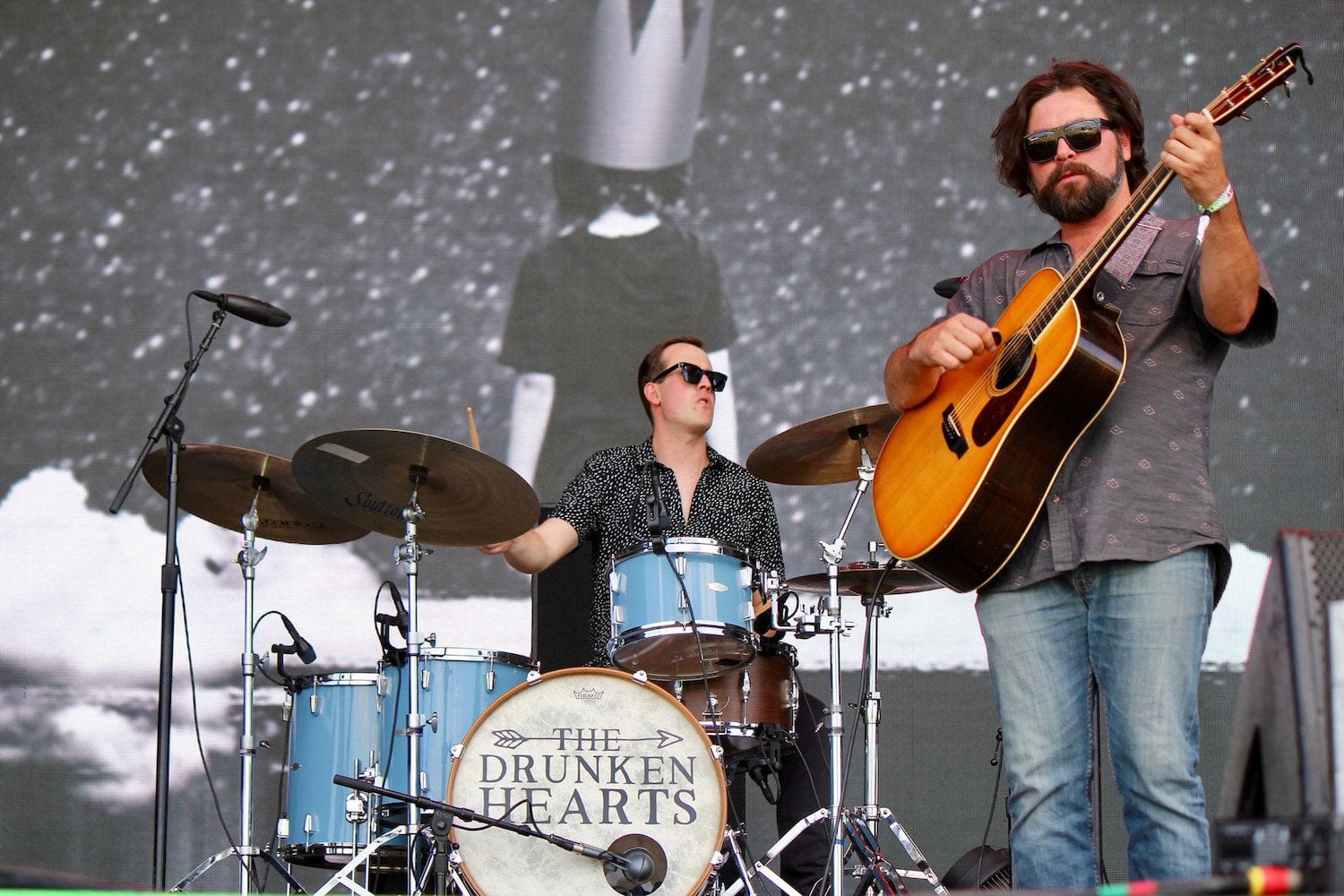 At Silo Sound Studios in Denver, the band recorded one song each day of the sessions for 11 days, McConathy said, “until we had knocked out everything that Tim and I had selected plus the instrumentals —11 songs in 11 days.” According to McConathy, “As a whole, the process was fairly painless,” including allowing Carbone to have free rein. “There was a little hesitation about the concept at first, but once we got into the studio and dug into the material, things went smoothly each day. It was all very much a team effort and concept that everyone bought into, with very little resistance, actually. We really did want the album to be different from our prior releases, and Tim has amazing ideas in the studio, so he was able to make it just that, in my opinion.”

Carbone not only produced the album but played piano on three tracks, the opening “Fire in a House” (percussion, too), “Alive ‘n Free” (along with organ and violin) and “Unrest”, while also supplying backing vocals with Sheryl Renee on “Passchendaele”.

While Greensky Bluegrass’ Paul Hoffman and others have compared McConathy’s sturdy voice to Eddie Vedder, one of the surprisingly delicious treats on the album is the introduction of Montgomery as lead vocalist and songwriter on standout cut “Run It All Together,” which evokes the heart and soul of Robbie Robertson and The Band.

Montgomery, an Arkansas native whose spirited guitar playing is as valuable to the band as his sense of humor, called himself the craziest member of the group in our interview last year because, “I’m the wild card. You never know what you’re gonna get.”

McConathy, who revealed that Montgomery’s contribution “marks the first time anyone other than myself has had a song on a Drunken Hearts record, which I think is pretty cool,” said he is happy to see his bandmates take on other roles, whether they involve ideas for songs and lyrics, writing original tunes or suggesting cover material for the group to perform.

“Personally, I enjoy a nice palette cleanse every now and then at a concert, so I don’t mind at all when Kory leads a tune or two or even three in a set,” McConathy said. “I believe in this band, both who they are as musicians and who they are as people, so it’s relatively easy to trust and know that whatever they are bringing to the table is going to deliver.” 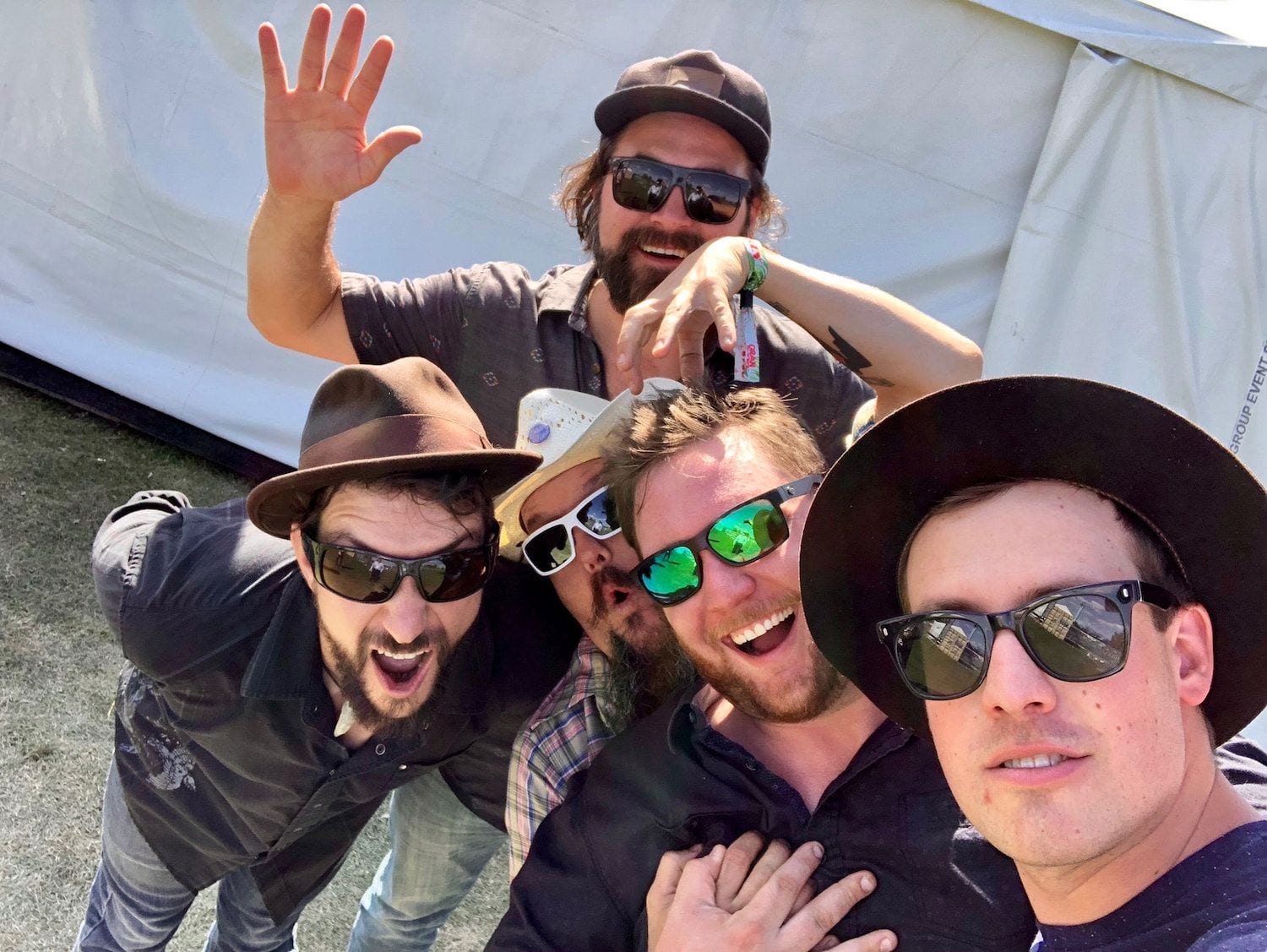 Russell, another transplant from Arkansas, also wrote album-closing instrumental “The Cave”, which opens with “a famous passage from Plato’s Allegory of The Cave for Tim to say in as creepy of a voice as possible”, McConathy shared. Perhaps their prog-rock salute to Spinal Tap?

That can’t be any weirder or bolder than traipsing over today’s treacherous political landscape, though. With McConathy writing rallying cries like the title cut’s fine line — “Let’s build a bridge and not a wall” — that should be repeated far and wide heading into the 2020 election, I asked him if current events are working their way into more of his songs.

“I don’t see us getting extremely political anytime soon, but the truth is it’s just too hard to sit around and not say anything when there is so much fucked-up shit going on in the world, especially in politics,” said McConathy, who pointed out that he wrote about the Dakota Pipeline in “Black Snake”, a song on The Prize. “I was raised that all people were created equal, period, and I’d definitely like to see more of that instead of what you get when you usually turn on the news. I know it’s cliché but it really is true, we’re all in this this together and I think we should take care of each other … we only get one shot at this thing called life. Human rights are something that I believe in and support tremendously, so yes, you will likely see more of that in my writing in the future, although I do tend to write about other topics as well.”

Just like the Wheels of the City, the hard-working parts of the Drunken Hearts keep going ’round and ’round.