Something important is happening in Dungeons & Dragons culture: prominent individuals and organizations are intentionally modeling inclusive values. In an era when many people are hungry for more moral courage from leaders, some Dungeons & Dragons influencers are responding with a passion. In particular, Critical Role‘s Kickstarter fundraising demonstrates that role-playing games are growing in importance beyond just blithe escapism.

Role-playing games like Dungeons & Dragons can be ideal spaces for fostering safe community, with its broader implications in players’ real world practices. This why some players are drawn to the game, consciously or unconsciously. We pretend to be characters striving to grow and succeed, and in the process we can grow as real people, too.

For example, experienced Dungeons & Dragons players often have stories of difficult choices or harsh ordeals their characters overcame and learned from. Sometimes as we tell these stories, we recognize how we grew, too. By practicing courage in the fictional stories of Dungeons & Dragons, we can strengthen our real-world virtues.

Dungeons & Dragons has the potential to help players grow in social virtues like moral courage partly because it’s a social game. Like most tabletop role-playing games, Dungeons & Dragons is fundamentally about creating an intentional community. The host/lead player, or Dungeon Master (DM), welcomes other players to a table. The table may be in the DM’s house, in a library, in a pub, or almost anywhere. When I started DMing as a teenager, my “table” was often a tent at night on a Scout trip. (We picked dice that were easy to read by flashlight.)

Whatever its mundane origin, the table becomes a metaphor for a new community ripe with potential. Becoming part of a Dungeons & Dragons table can mean becoming part of something larger than ourselves.

When a table works, it’s a very special kind of community. The players create a story together and that’s marvelous. It becomes an even better experience when players create a table humming with acceptance, belonging, and camaraderie. Note that I’m referring to the climate among the players.

At a good table, some characters can be at odds, but the players can feel closer in spite of conflicts or even because of conflicts. It’s a delightful paradox of role-playing that we can have fun debating strategy or arguing ethics, as long as everyone consents and we all enjoy the sparring.

That paradox of welcoming conflict is part of the potential of communities — especially role-playing communities — to nurture personal growth. In general, people who feel safe and supported are more willing to take risks and strive to improve their efforts. As a Dungeons & Dragons table, this becomes a positive feedback loop: a safe climate leads to immersion, flow, and player growth, which helps ensure everyone is having fun, which in turns pours positivity back into the table. It’s like the best movie or novel about an intrepid team pulling together, only better. There is something to be said for the community-building that Dungeons & Dragons fosters, and the larger-world implications that infers.

Almost every experienced Dungeons & Dragons player has a story about their favorite table. They may have played for just one day or they may have played every Saturday night for years. Once a player experiences such a table, they often spend the rest of their life trying to find or create similar tables and treasuring them. That’s how special a table can be. 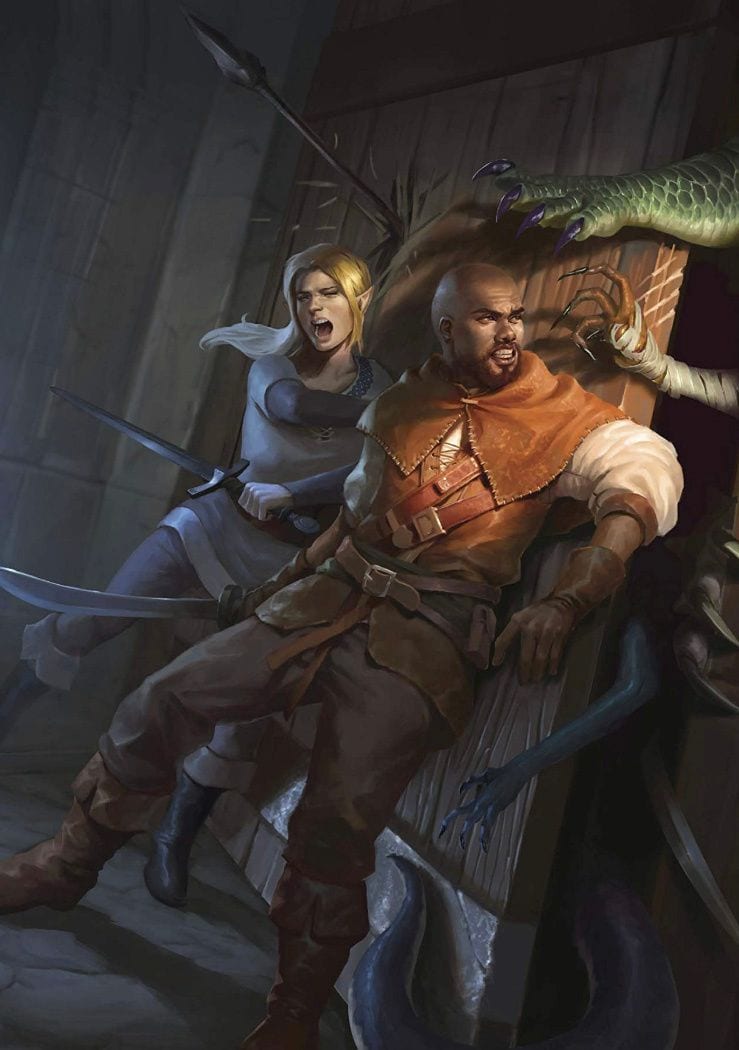 Gaming Can Also Be Visciously Exclusionary

Unfortunately, for much of Dungeons & Dragons‘s history, our collective community has often been dismissive or outright hostile to players who aren’t cis male, heterosexual, and white. Many players with other identities can tell stories of being excluded from a Dungeons & Dragons table, like my wife (who’s cis female). Even as a gamer with privilege, in my own 30+ years I’ve experienced a variety of unsettling and offensive incidents.

For example, in older Dungeons & Dragons books it’s common to find illustrations of idealized women wearing little or no clothing, such as the cover of Tome of Magic (1991). Other tabletop role-playing games have also included illustrations and content that are equally or more objectifying and objectionable. More broadly, gaming culture can be synonymous with intolerance. In games like EVE Online, I’ve encountered wide-spread toxicity among players, including racism, sexism, misuse of words like “gay” and “retarded”, and rape culture.

Some gamers directly engage with these problems. Consider Anita Sarkeesian, who offered thoughtful, constructive, feminist critiques of games and gaming culture in her Tropes vs. Women video series (2013). But many gamers responded with ugly backlash and harassment, including rape threats and death threats. Many failed to understand one of Sarkeesian’s key ideas, that we can both love and criticize a game. For example, the Tome of Magic is one of my favorite Dungeons & Dragons books, even as I push back against its problematic representation.

In short, in Dungeons & Dragons and in many games, one of the greatest obstacles to unlocking the full potential has been the players ourselves. Gaming communities can bring out the best in us, but we need to do more to make them inclusive and welcoming.

That’s context in which Critical Role emerged. In their own words, Critical Role is “a bunch of nerdy-ass voice actors who sit around and play Dungeons & Dragons.” They started live streaming their game sessions in 2015 and their popularity has grown exponentially. The way they play the game and how they relate to their audience has fostered an energetic fandom.

The Critical Role fans, who call themselves “Critters”, watch and re-watch the game live and/or via video on demand. They talk online about Critical Role and the players. They celebrate and analyze all the comedy, action, drama, and tragedy throughout the 170+ episodes so far. They create and share fan art and fan fiction. Fans buy and wear Critical Role merchandise. They buy the official Critical Role book and play Dungeons & Dragons in the same world.

Critical Role‘s players demonstrate their gratitude and affection for Critters. For example, during intermissions, Critical Role showcases fan art. Some Critters aspire to work as professional artists. Having their work featured like this is incredibly gratifying and encouraging. Some of my friends have had work showcased, so I’ve seen this positive effect first-hand. These concrete steps mean that when program creator Matt Mercer tells fans, “We love you,” the fans believe it’s true.

Like many Critters, my wife and I are especially drawn to Critical Role‘s overt messages and representation around issues of equity, diversity, and inclusion. We live in an era when leaders like Trump are saying and doing offensive things on social justice issues like racism, sexism, and trans intolerance. Critical Role and its community offer a safe alternative.

Diverse players and characters are welcomed to the Critical Role table: people of color, people with open LGBTQ+ identities, and people with mental illness. Women can be strong and men can say, “I love you.” The overt themes include courage, resilience, speaking truth to power, and defying tyranny. The fans witness camaraderie and courage, from players sharing the spotlight to characters admitting their feelings for one another. In short, Critical Role models one of the best kinds of table games.

Furthermore, the broader Critter community explicitly values safety and inclusion. For example, as part of the Twitch streaming experience, Critters can text chat in real-time as they watch together. The moderators gently but firmly enforce inclusive community norms, like halting any inappropriate comments about the physical appearance of female players. Being a Critter means aspiring to be a certain kind of player and person. My wife wears a Critter hat to quietly find other people who may share our values.

When we consider Dungeons & Dragons‘s history on issues like representation and inclusion, and the broader toxicity undermining gaming’s potential, Critical Role‘s meteoric success makes more sense. Many gamers are clearly craving visible improvements in safety and inclusion. We’re excited by celebrity players who champion such values. But this spring’s Critical Role Kickstarter still surprised many people.

As professional voice actors, the players have worked on many animated movies and shows created by other people. Naturally, they wanted to work on an animated project of their own. Critical Role set out to crowdfund a single animated special with a goal of $750,000. They raised over $11M.

I’m amused by mainstream news sites that try to explain what happened and what it means (e.g., Variety, CNBC). One interpretation is that Critters really want an animated series. I think there’s something else going on, here.

The Critical Role players’ not-so-secret dream is creating a backdoor pilot to win support for something more ambitious. In fact, before choosing Kickstarter, Critical Role first pitched to big studios. But as CR player Travis Willingham told Yahoo! Entertainment, “There was some interest but mostly it was met with confusion. When we tried to describe the weekly [streaming] show, they didn’t really get it.”

Playing to Change the Gaming World

Critical Role is more than just a show and fan community focused on rolling dice and having fun. It’s part of a larger movement to make gaming more safe and inclusive. It’s about unlocking Dungeons & Dragons‘ potential to welcome more people in and help them grow.

Our nation and our world are beset by intolerance, oppression, and violence. Some of our institutions and leaders are ineffectual, while others are passive or even complicit — or worse. No amount of publicly-offered thoughts and prayers will solve our most pressing problems.

As always, communities will play a vital role in our progress towards justice and equity. Stories are one of the best ways to teach civics and social justice, and its simpler and more dramatic to tell stories that pivot on the actions of lone individuals. But deep, lasting social change requires collective, sustained activism.

In the real world we have rallies, protests, and editorials, and we also have Twitch streams, Reddit threads, and Discord servers. The internet has nurtured new communities of democratic discourse and admirable activism. It has also spawned communities of “alternative facts” xenophobia, hate, and extremism. Gaming communities can’t and don’t stand apart from either kind of community, even if they want to. Game companies and gamers make choices about our collective values and norms, with far-reaching ripple effects. Even the smallest of choices can be consequential, like the slurs we condone or the characters we fan over.

The movement isn’t over and we still need individuals to model courage. Critical Role‘s players demonstrate courage, if you will, through the values of their table. Where individuals model, communities can follow. We need both individuals and communities to inspire and embolden more people to speak out and stand up. To paraphrase Dr. Martin Luther King, Jr., it’s easier to stand up when we don’t have to stand alone.

Critics might ask, Will the Critical Role animated series be an extraordinary work of art? How will it compare to the acknowledged masterpieces in fantasy animation? These are worthy questions, but they don’t get at the heart of what’s happening. Critical Role illustrates how Dungeons & Dragons is growing up and growing more meaningful. Critical Role‘s Kickstarter is more about gaming as social change — and not so much about an entertaining cartoon.