And speaking of performance, the first act to the stage was opening act Copper Sounds. The duo of Isaac Stacey and Sonny Lee Lightfoot, who presented an intriguing way to expand the DJ-centric palette of sounds. The duo’s interest lies in the sound produced by different material when those are placed on the turntable. Throughout their performance, the two made use of almost every object imaginable, from vinyl-shaped copper, ceramics, pieces of timber and rocks to produce a completely otherworldly experience.

The set started off with a ritualistic touch, as the duo started exploring some of the weapons in their arsenal with sparse, repetitive mallet drumsticks hits. This ceremonial-like setting then gave way to a performance resembling an off-kilter electronic set, enriched by the plethora of sounds and textures at the duo’s disposal. Their 40-minute long recital really featured a bit of everything, as more pronounced and brutal parts rose from the monotonous progression. The immediacy of electronic music met with an industrialized characteristic to build this relentless progression, with Copper Sounds meticulously fine tuning their performance and changing the objects at work. And then, while there appeared to be this tendency towards a more structured recital, the duo entered a more abstract realm where off-beat elements appeared leading to an overall deconstruction of their set. It was an overall impressive recital, which showcased completely the duo’s vision. 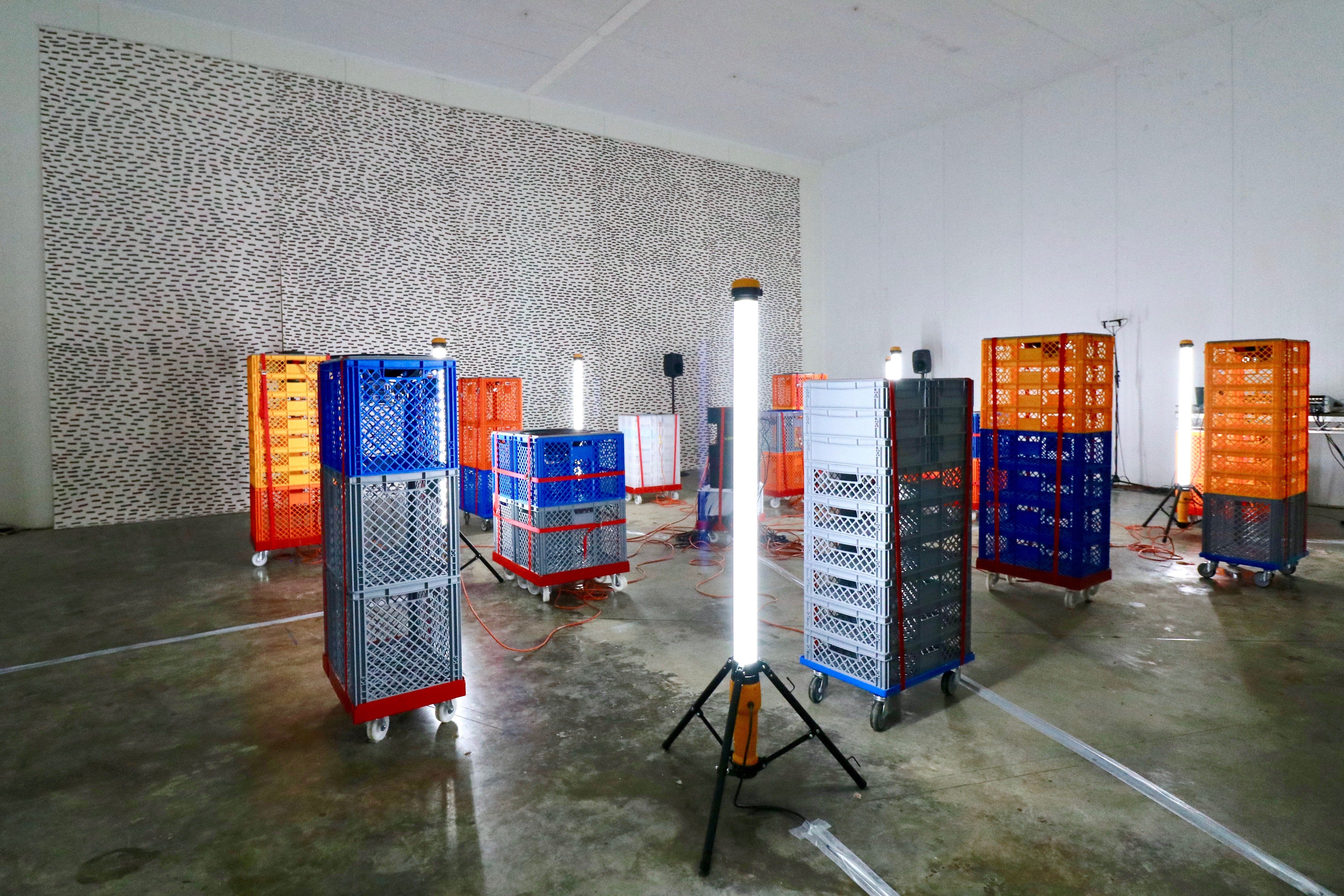 Once Copper Sounds set finished the audience was led to a different room of the venue to experience the combined performance of producer Beatrice Dillon and performance artist Keith Harrison. The setting alone for this was impressive. Leaving from the dark and moody space where Copper Sounds performed we enter a white room filled with light. Big fluorescent lights are placed throughout the space, an array of Genelec speakers form a circle around the room and on top of that big, woofer speakers are positioned in the space. A closer inspection to the woofers results in the discovery of different materials that are placed inside them, ranging from flour and dough, to refined sugar and water. 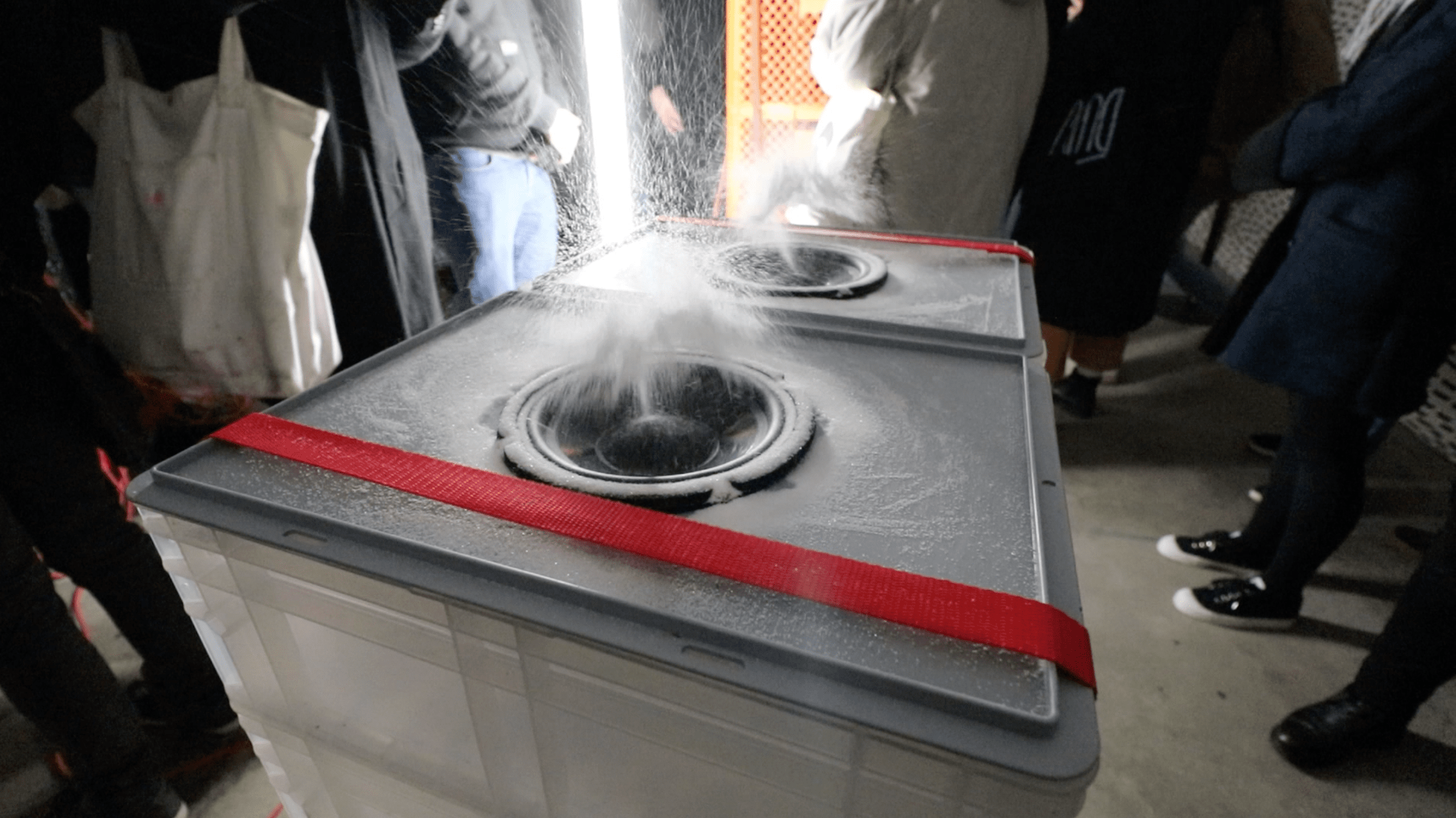 The presentation alone was quite astonishing, but when Dillon started to unfold her compositions the whole experience moved to a different level. The setting of the speakers had the two-fold result of creating a surrounding effect, while also adding to the playfulness of the performance. Speakers where not always used simultaneously, and Dillon’s activations were highlighted not only by the sound but also by the reaction of the materials. Water begun to bubble, sugar grains started to jump and strange waveforms were created on the dough. It all worked perfectly to create this immersive experience, where the audience is able to participate, examine and interact with all aspects of the performance. It was overall a very innovative approach that was executed magnificently by the two performers. 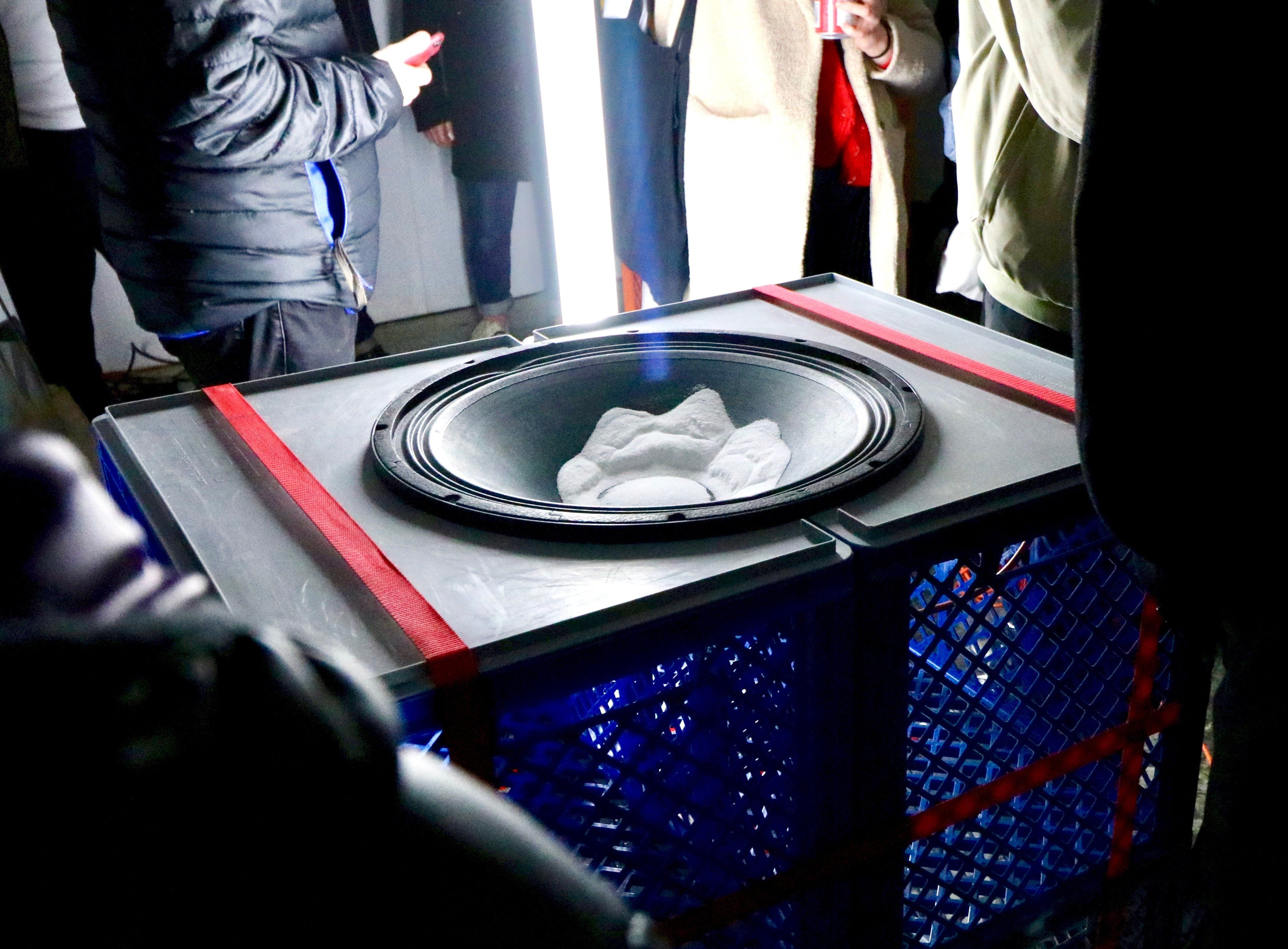 Oultands once more did not disappoint and Ecstatic Material is an excellent addition to the audio-visual performances curated by the network. Both Copper Sounds and Dillon’s and Harrison’s performance were excellent, showcasing innovative and immersive experiences that continue to break boundaries. Till the next one …

Ecstatic Material is the latest live installment from the Outlands Network, a UK-based experimental music touring body. The mission of Outlands is to bring to the front adventurous, open-minded and genre-defying acts, and in its relatively short existence it has produced impressive events featuring the likes of Matana Roberts, Yonohana Variations, Kyoka, and Grischa Licthenberger among others.

So 2019 starts strong for Outlands with Ecstatic Material, a study in the combination of the immaterial world of sound with the physical dimension. The performance was presented across a number of cities in the UK and I was lucky enough to witness the Manchester gig at a converted warehouse in Salford. The vintage look of the venue was in complete harmony with the event taking place, with its rustic and minimalistic presentation creating the perfect habitat for the performers.