“He told me the other day. There is an elephant in Manzhouli. It sits there all day long. Perhaps some people keep stabbing it with forks. Or maybe it just enjoys sitting there. I don’t know.”

And so begins An Elephant Sitting Still (Da xiang xi di er zuo), the debut feature film by Chinese novelist and film director Hu Bo. Whether tired or contented, the elephant serves as a weighty metaphor. What is it doing in Manzhouli? And why is it so still? Three words linger uncertainly, swooning in the air. “I don’t know,” mutters Wang Jin (Congxi Li), the film’s quiet protagonist.

Though the film wrestles with themes worthy of a Greek tragedy, readers may wonder at the outset about the fabled creature’s meaning. Those preferring a critical analysis may appreciate the elephant as a symbol for the mind’s automatic processes (intuitions, emotions, habits, etc.); perhaps it sits in opposition to the bogeymen of modern culture (consumerism, social phobias, political extremism). Others may prefer a simpler diagnosis: the creature is only a spectacle, a circus act. People don’t need a reason to make a trip of self-discovery. Go ahead, readers, take your pick: any meaning will do.

Hu Bo, also known by his pen name Hu Qian, based his moody motion picture on a story from his 2017 novel, Huge Crack (Jiuzhou Press). For a 29-year-old film director who had previously only created three short films, An Elephant Sitting Still looms as a bold statement from such a young talent; since its release, it’s won 11 awards and earned over 20 nominations. The film is enriched with an author’s studied lyricism. The plotlines are woven together subtly, synching the tangled threads tighter, and tighter—until one is left breathless.

Throughout the four-hour epic, absent stares befuddle the faces of Bo’s characters: chests cradle chins, eyes smolder quietly. Even the film’s color treatment conveys a balmy pallor. People wander alone with the sorrows of a city, disconnected from their neighbors. Marooned between cowardice and apathy, acts of kindness are foreign here. When hope does emerge, it appears with a soft glimmer yet resounds in a manner more deafening than bombs.

The first scene opens with Wei Bu (Peng Yuchang) taping up a homemade weapon in his bedroom. The teenager is called into the kitchen where he’s scolded by his unemployed father, Guozhang Zhao-Yan (Zhao-Yan Guo-Zhang). The film segues to quarreling lovers: Yu Cheng (Zhang Yu) smokes slowly, bangs hanging like tentacles across his face, half-dreaming, half-listening to Manzi Zhuyan (Yanmanzi Zhu).

Domestic disputes continue elsewhere. Wang Jin becomes a contested talking point between his daughter (Danyi Li) and his son-in-law (Wei Kong). Needing to save money to send their son to private school, the couple can’t afford to keep him around anymore. Finally, there’s Huang Ling (Wang Uvin), Bu’s unreciprocating romantic interest. After picking up her own birthday cake, Ling argues at home with her mother (Wang Ning) about why the desert is crushed. Was it stepped on by accident? Or out of retaliation?

The trouble has only begun. As the plotlines tighten, the desperation increases. Infidelity drives one man to jump headfirst from a window. Anger leads another man to stone a dog in an alleyway. Nobody is safe. Everybody is to blame. As tangled as the threads may seem, the plot weaves around two high school friends, Wei Bu and Li Kai (Zhenghui Ling), struggling to right themselves in the wake of bad decisions. They’re confronted by a group of bullies led by Yu Shuai (Zhang Xiaolong), Cheng’s younger brother. The two friends are accused of stealing Shuai’s cell phone and the issue is pressed over time. They eventually stand up for themselves. But the results don’t go as planned. 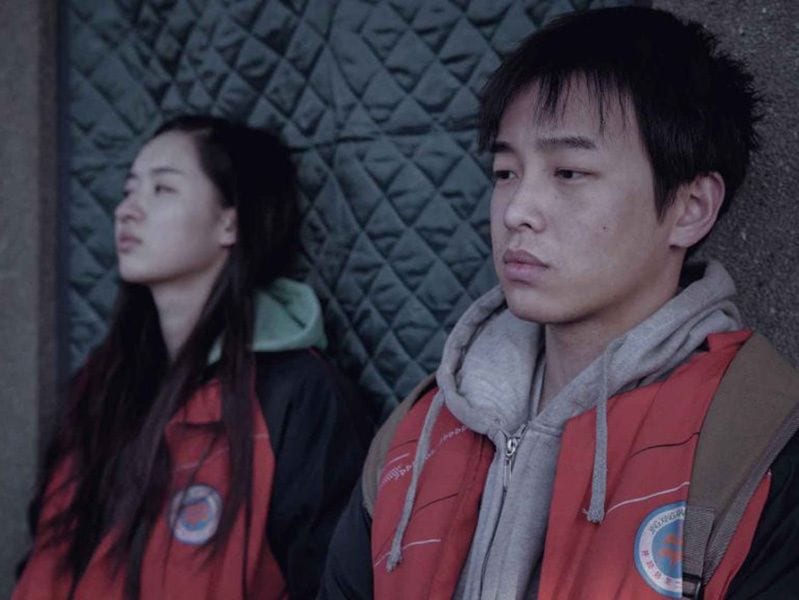 Throughout An Elephant Sitting Still, people take privileges with each other’s feelings while fumbling with their own. Bu feels that his parents can’t help him fix his problems; ashamed and afraid, he plans an escape to Manzhouli. Cheng must decide between tracking down his brother’s attacker or visiting Shuai in a hospital. In a moment of heavy silence, he stands in an unseen web, bangs dangling like barbs, weighing the allure of vengeance or the labor of love.

The People’s Republic of China opened Manzhouli in 1992. As China’s busiest port of entry with Russia, it serves as an attraction for social outliers. The trains, like the characters in An Elephant Sitting Still, are constantly in motion, moving without direction, groaning under the weight of their rusty fate. Testing companionship amid misfortune, Bu flees towards a border city where the trains run all night long and the circus turns no one away. For those seeking refuge from tragedy, a circus elephant show becomes more than a destination; it becomes destiny.

Greek mythology depicts humans as torn between opposing forces, suffering by their own hands as often as by the gods’ intrigues. Even in the post-Enlightenment 21st century, questions of fate contrast with questions of agency: Are we really free? Where does evil come from? How should we respond to suffering? Regardless of one’s philosophy, life is hard and pain is an unavoidable part of life. Unfortunately, the world was too much for Hu Bo, who took his own life soon after finishing An Elephant Sitting Still. Whether his death was due to battles with personal issues or, as some reports suggest, disputes with his film producers, the world has lost a bright new talent far too soon.

In the wild, as a matter of survival, elephants avoid sleeping for more than two hours. When they do sleep, they stand, due to the risk of crushing internal organs from their own body weight. Whether standing or lying, asleep or awake, Hu Bo’s mascot wraps its trunk firmly around one point: Not everything that moves has a purpose, and not everything that rests does so willingly. Somewhere in Manzouhli there is an elephant sitting still. For some, it bears the weight of the world. For others, it signifies little. Either way, it refuses to move. Why that is, we won’t know. But it’s worth traveling along with this film to see.