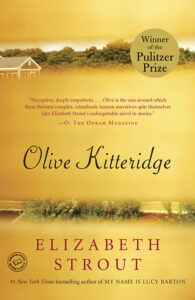 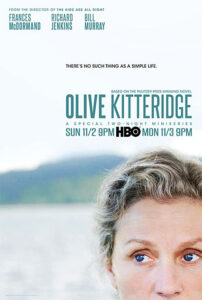 One sea-salted morning, you linger at the order counter in a New England coffee shop. You want to surprise your significant other—who has a sweet tooth—with a breakfast treat. You’re trying to decide between a cinnamon sugar donut or chocolate-glazed. The woman behind you in line sighs and says, “Dolt.”

“Excuse me?” You turn and face this woman, this broad-shouldered, large and tall woman, perhaps in her 50s or 60s. She wears a plain housedress and sensible shoes and stockings stretched taught across her calves.

“You heard me,” she says, unapologetic. She is shocking in her audacity and lack of shame. “You’re being a dolt. Holding up the line. Sugar or sugar. It’s all the same. Just choose and get on with it.”

This, perhaps, is how a run-in with the eponymous character of Elizabeth Strout’s Olive Kitteridge might play out.

In Olive Kitteridge (2008), Strout has created an iconic literary character for the 21st century, and she has done so within a literary format that’s been around since Geoffrey Chaucer’s The Canterbury Tales: the novel-in-stories, or linked story collection. Not quite novel, not quite short story collection, the novel-in-stories bridges the gap. These are not just short stories anthologized and unconnected, placed one after the other piecemeal. As academic Janet Zong York puts it in her analysis of the work of Junot Díaz, linked story collections do the work of “interweaving fragments, rejecting representative conventions and monolithic narratives, and producing a surplus of feeling and knowledge beyond individual stories.”

While the format has been utilized throughout literary history, it saw a surge in popularity throughout the 20th Century: James Joyce‘s Dubliners (1914), Sherwood Anderson‘s Winesburg, Ohio (1919), Ray Bradbury‘s The Martian Chronicles (1950), Tim O’Brien’s The Things They Carried (1990), and Denis Johnson‘s Jesus’ Son (1992), to name just a few.

As we’ve turned the corner into the 21st Century, novels-in-stories—particularly those written by female authors and featuring iconic female characters—have seen a huge uptick in popularity. Collections like Olive Kitteridge and Strout’s 2019 sequel, Olive, Again, are becoming bestsellers and being nominated for National Book Awards (Lauren Groff‘s Florida, 2018), as well as winning National Book Critics Awards (Edwidge Danticat‘s Everything Inside, 2019), the Pulitzer Prize (Jennifer Egan’s A Visit from the Goon Squad, 2010), and the Nobel Prize (Alice Munro‘s The Beggar Maid, 1977).

But none are perhaps more successful and serve as a better introduction to the novel-in-stories than Strout’s Olive Kitteridge. In addition to selling more than a million copies, Strout’s collection won the 2009 Pulitzer Prize. It also inspired its sequel and was adapted into an Emmy Award-winning HBO miniseries starring Frances McDormand.

The 13-story collection follows the residents of the fictional, coastal town of Crosby, Maine, but as the title declares, this is Olive’s story. The blunt, erratic, ornery—some might say caustic—titular character serves as the collection’s unsentimental, often-unsympathetic lynchpin.

Olive’s perspective comprises about half of the stories: “A Little Burst”, “A Different Road”, “Tulips”, “Basket of Trips”, “Security”, and “River”. But her presence looms large over the rest of the Crosby tales, whether as a pivotal supporting character (“Pharmacy”, “Incoming Tide”, “Starving”), a passing background extra (“Winter Concert”), or a fleeting thought (“The Piano Player”, “Ship in a Bottle”). As described by author Hermione Hoby in her Guardian interview with Strout, “The lives of [Crosby’s] residents… thread through the life of Olive, who’s as unwitting in her tyranny as she is in her kindness.”

As a novel-in-stories, Olive Kitteridge focuses on shaping Olive’s character. Whereas other linked story collections might utilize the format to explore a specific place (Winesburg, Ohio; Sherman Alexie’s The Lone Ranger and Tonto Fistfight in Heaven, 1993) or a collective experience (The Things They Carried; Edwidge Danticat’s The Dew Breaker, 2004), Olive Kitteridge creates a kaleidoscopic portrait of the titular character. By sliding in and out of multiple perspectives, we see Olive from every angle.

As author Louisa Thomas puts it in her New York Times review, “A big woman, she’s like a planetary body, exerting a strong gravitational pull…  without her, the book goes adrift, as if it has lost its anchor.” Olive is the sun (or, more appropriately, the black hole) around which every story orbits.

How was Strout able to craft within the novel-in-stories format this character, this icon? Like so many other eponymous heroines—Jane Eyre and Anna Karenina, Madame Bovary and Madame Butterfly, Lolita and Emma and Antigone and Sula—what is it about Olive Kitteridge that makes her not only memorable but haunting?

A retired seventh-grade math teacher, Olive is the wife of the town pharmacist. She and her copiously kind husband Henry build a house next door for their son Chris. She grows tulips in her front yard. Olive’s homespun biography and pet name (“Ollie”) paint an expectation: that of the country grandmother, one who welcomes guests at the door with warm cookies.

But Olive is not that apple-cheeked mentor with candy in a dish on her desk; she’s the disciplinarian the children fear. Olive is not a nice person. She “perceives herself as a no-nonsense truth-teller, but constantly humiliates her husband and criticizes her son in ways that make him feel worthless” (Gross). Olive tells-it-like-it-is (or at least how she perceives it to be), everyone else’s feelings be damned.

Olive as a character was at the forefront of 21st Century unlikable women. Nowadays, the “unlikable female protagonist” is much more common, but in 2008, when the book was first published, people were still, as Olive would say, all in a huff about it. In his Time article, “Olive Kitteridge and Why ‘Likability’ Is for Saps”, critic James Poniewozik says that “likability” is code for a character who doesn’t challenge the audience, who does nothing that the reader might not personally approve of.

Under this definition, thanks to societal expectations, female characters, in particular, are forced to meet a likability threshold. “Because unlikability is about challenging,” writes Poniewozik, “it bangs up against social expectations that women should not challenge us — that they should be pleasers and peacemakers, that we should be comfortable with them in a way we don’t necessarily expect with men.”

As such, upon Olive Kitteridge‘s first release, there was a lot of hemming and hawing about the character’s likability or lack thereof. In interviews, Strout had to field question after question about Olive’s characterization. In an NPR interview with journalist Scott Simon, Strout says, “I love Olive… But I understand that many people don’t. That’s fine. I make sure that I don’t hold her back. I let her behave as badly as I think she would.”

In many ways, we can thank Olive for paving the way for more female characters to be unlikable, even though, as Poniewozik writes, “In recent years, we’ve moved beyond that bind to an extent in dramas about antiheroes –- but it’s no coincidence that antiheroines are fewer and farther between, and their creators and their shows tend to take more guff about it.”

Olive’s blunt ridicule endears her to some readers, alienates her from others, and seeps through every pore of Olive Kitteridge‘s prose. Strout utilizes a free indirect narrative style; the third-person narrator often adopts Olive’s phrasing and the words she might use. Tulips are described as “ridiculous splendor”, ridiculous being one of Olive’s favorite insults. She refers to everyone—her friends, family, coworkers, neighbors, total strangers—by a string of slurs. They are “nuisances”, “morons”, “hellions”, and “flub-dubs”. The vocabulary and acerbic tone sprinkled throughout the narrative “animate Strout’s prose in the same way that a forceful person [like Olive] alters the atmosphere in a room” (Thomas). Olive’s cantankerous personality drives the prose; she refuses to be ignored.

Olive’s unlikability is on display in both big ways and small. Strout doesn’t flinch from painting her heroine as everything from petty to deeply damaging. For example, in the story “A Little Burst”, Olive overhears Chris’ new bride Sue criticize her choice of dress and how she raised her son. “Something stunned and fat and black moves through her” (Strout, 70). So she decides to wreak petty vengeance by ruining one of Sue’s sweaters with a black marker and stealing a shoe.

In the story “Pharmacy”, Olive relentlessly berates her gentle husband, a man often referred to as the sweetest person in town, because she very much wants to leave Henry and engage in an affair with Jim O’Casey, her coworker at the middle school. Meanwhile, Olive’s constant, harsh condemnation of Chris’ every action in childhood—criticisms she denies take place—leads to his permanent mental health issues and their inevitable estrangement. She finally realizes in the story “Security” that she has completely failed Chris as a mother, but by then it’s far too little and far too late. She has no desire to make amends.

Strout flouts the idea that female characters need to be idealistic: perfect mothers and wives, spunky go-getters, noble heroines, exalted bastions of goodness and integrity. Olive “[offers] an implicit ‘hell’s bells’ (her favored expletive) to the fallacy that female characters should be ‘likeable’” (Hoby). Strout recognizes that in fiction, likability comes at the cost of interest and authenticity.

In interviews, Strout often relays the anecdote of a fan, a pretty 20-something who meets with her friends every month at a coffee shop to talk about their “Olive moments”. Strout believes Olive is relatable because she embraces the things her readers regret doing or can’t; Olive says and does the misdeeds for them. In this way, the somewhat detestable character is made empathetic and real. Or, as Louisa Thomas puts it, “There’s nothing mawkish or cheap here. There’s simply the honest recognition that we need to try to understand people, even if we can’t stand them.”