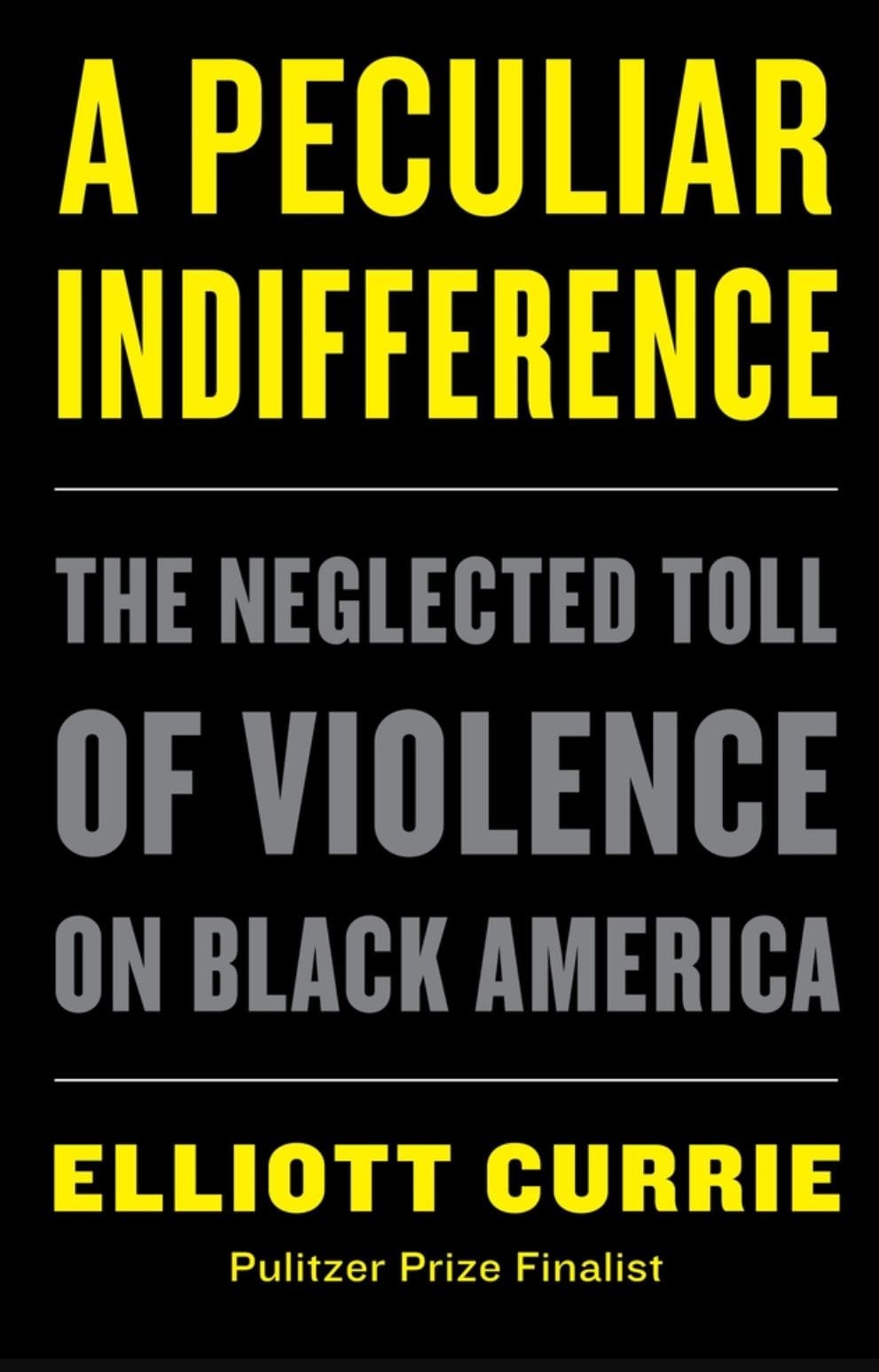 “[There have been] few other cases in the history of civilized peoples where human suffering has been viewed with such peculiar indifference.” – W.E.B. Du Bois

Sometimes the books delivering the most chilling message can be the most hopeful. These are the authors who are clear-eyed about the problem they are addressing while also refusing to throw their hands up in despair. They want to both level with the reader and provide real-world answers. It’s a difficult balancing act, but one that authors like Pulitzer Prize finalist
Elliott Currie pull off.

Currie’s
A Peculiar Indifference is an infuriatingly necessary read. Its title derives from W.E.B. Du Bois’ statement of bafflement about a specifically American disinterest in the suffering of its Black citizens. While Currie shares the depth of Du Bois’ concern, he does not indulge in polemics. An academic sociologist and criminologist who serves up tranches of data to support his points, Currie lets numbers, rather than rhetoric, do the work. And what his numbers show is a crisis with no signs of abating. Especially as long as the country turns a blind eye to it.

The bulk of Currie’s work takes the form of deep dives into the disproportionate ways Black communities suffer from violence. This remains true even when controlling for America being a more violent nation than its peer societies. He lays out harrowing statistics to prove a point most readers likely already know but have not tangled with on a specific level: just 13 percent of the United States’ population, Blacks “account for over half of all years of life lost to violence in the twenty-first century.”

Even as violent crime plummeted between 2000 and 2011, violence continued extracting a toll from Black communities. One study cited by Currie showed how, in that period, there was actually a “significant escalation” of gun violence victims treated by a Newark hospital serving a Black community. In a similar time period, Miami-Dade showed a rise in young Black men from a few “deeply disadvantaged and highly segregated neighborhoods” being treated for gunshot wounds. A 2013–2014 study of firearm assaults in Philadelphia revealed Black residents were five times more likely to be shot than Whites.

“The overall picture,” Currie notes, of Blacks being radically disproportionate victims of violence “is stunningly consistent … numbingly predictable [and] not going away.” While that is not a revelatory conclusion, Currie follows a different track afterward. Most popular studies of violence in the Black community zero in on the numbers and maybe highlight some individual stories of victims. But Currie’s chapter on how those levels of chronic and often random violence impact the psyches of people in those economically distressed and segregated neighborhoods.

Recalling a study of how violence affected Black schoolchildren on Chicago’s South Side in the late 1980s, Currie quoted its authors explaining how their subjects’ experiences were “strikingly and fatefully similar to what children experienced in Cambodia during the Pol Pot regime, Northern Ireland during the Catholic/Protestant ‘troubles,’ or Gaza under Israeli occupation.” More recent studies looked at by Currie had similarly shown that “serious violence is an astonishingly common part of the lived experience of low-income African Americans in the United States and that this experience—as a witness or as a victim—starts very early.”

Determined not to be indifferent to the human toll of this crisis, Currie writes about how the constant exposure to endemic violence causes not only day-to-day psychological strain (one researcher he quotes points out how “cognitively and emotionally exhausted” friends and relatives of the victims become) but also a long-term loss of faith in any future. Living in chronically violent conditions creates tsunamis of trauma that wash over communities, leaving abuse, addiction, and more violence in its wake. Those results are frequently and correctly called out by those who decry these conditions for both constructively empathetic and more simplistic, borderline racist, perspectives.

But in one of the book’s most impactful sections, Currie talks about the less-commonly cited effects of violent environments on Black residents. In a seeming attempt to counteract the well-studied tendency in America for academics and health professionals to show less concern for Black well-being (based on dehumanizing assumptions that exaggerate Black physical strength and downplay peoples’ emotional sensitivities), he lays out the health problems seen in Black areas affected by violence. These range from mental (depression, anxiety, cognitive decline, and post-traumatic stress disorder) to the physical (hyperactivity, pregnancy complications, weight gain, sleep disparities).

Looking for the causes of this highly American violence, Currie draws upon research dating back to the early 20th century. Those studies pointed to a “toxic mix” of post-Emancipation conditions. “Overcrowding, poverty and economic insecurity” along with “systematic oppression and discrimination” often deprived Blacks of hope their situation could improve. At the same time, systemic inattention to fairly policing and protecting Black communities reinforced the idea that Black lives were not valued. A 1941 analysis of racial disparities in criminal justice determined that under-policing of Black homicide victims and over-policing of White victims (when the perpetrators were Black) created a “double standard” that in effect sanctioned violence in Black communities.

Currie’s analysis leads him to this conclusion:

“There is nothing normal or inevitable about the racial divide in violent death and injury that continues to haunt America. It is the product of deliberate choices—choices that have systematically privileged some people while systematically depriving others. We have had plenty of opportunities to make different ones.”

While this is hardly a cheery thought, it also suggests a way forward. Because different choices can be made.

Currie’s argument for a possible answer takes a surprising turn. While acknowledging that there is no silver bullet—even the best programs, he says, “ultimately will be thwarted by the overarching environment of systemic neglect and racialized inequality”—he proposes that the best way to address the root causes of violence is to reduce the number of people “at high risk”. For Currie, this means bringing Black unemployment more in line with that for Whites (it is currently about two to three times as high). Since that disparity has remained no matter how robust the economy, and research cited in the book makes a strong link between rising employment and lowering violence, he proposes a federal jobs guarantee:

“Guaranteeing good work with reasonable wages, and the training to make it feasible, would also strike a powerful blow against the extreme and intractable poverty that, as we’ve seen, is so closely linked to endemic violence.”

For some Americans, particularly those convinced that the only thing causing violence and poverty in Black communities is moral lassitude and a refusal to bootstrap themselves into economic prosperity, a massive government outlay like Currie is calling for will be dismissed out of hand. Big problems, though, call for big solutions.

Currie’s answer might not be the only one with a good chance to have a positive long-term impact on the lives of many Black Americans. But it beats wishful thinking.