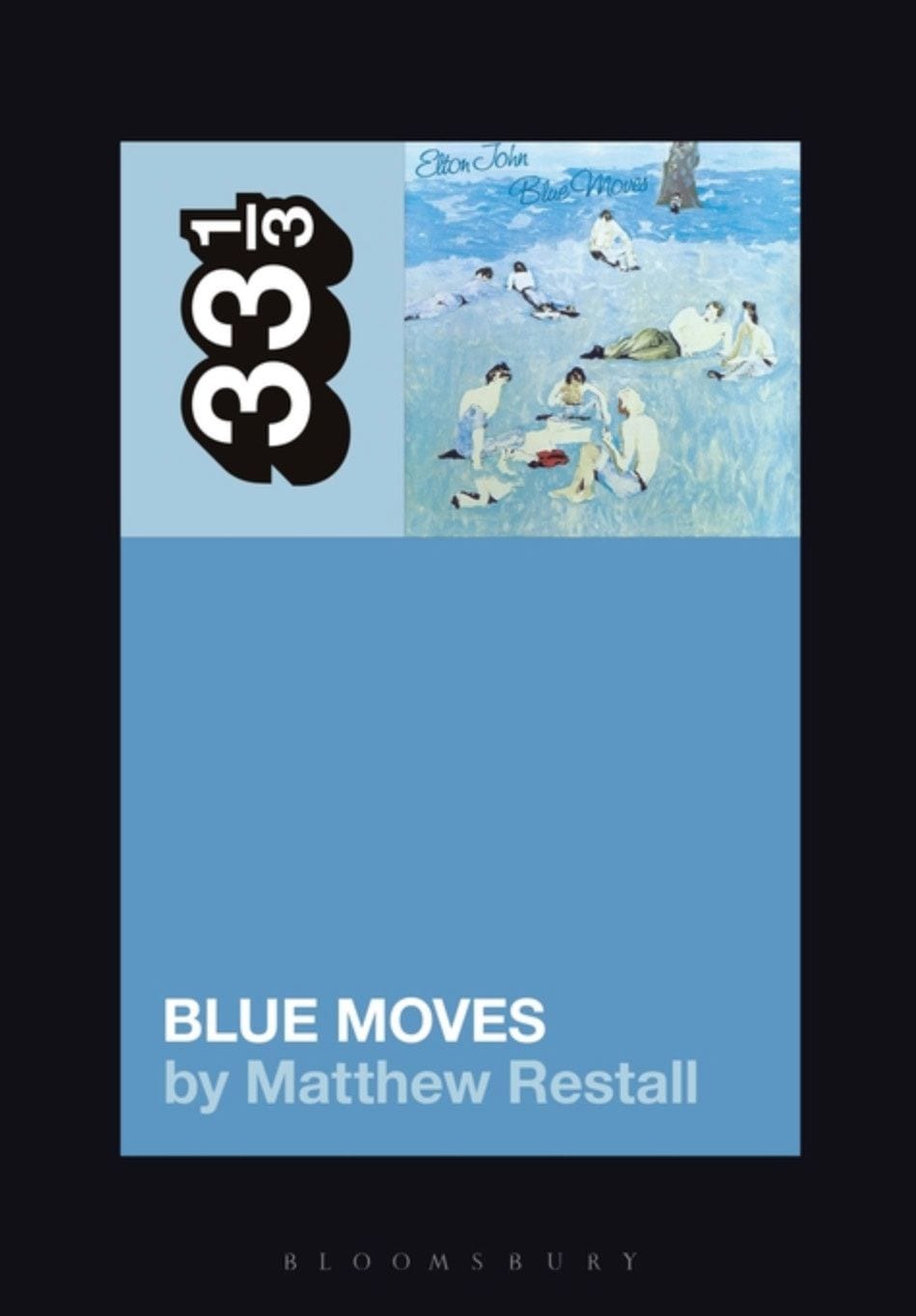 “Blue Moves is an Elton John album. It is not his best.”

Thus begins the latest book in Bloomsbury Academic’s 33 1/3 series, each volume a deep dive into a specific record. Blue Moves, the 148th book in the series, was written by Matthew Restall, the Edwin Erie Sparks Professor of History, Anthropology, and Women’s, Gender, and Sexuality Studies at the Pennsylvania State University. While Restall’s books typically cover Colonial Latin American history, here he provides a spirited defense of Elton John’s 1976 double album, Blue Moves, which is commonly considered to be the record that derailed, if not destroyed, John’s career.

Restall begs to differ. And despite that opening sentence, Restall considers Blue Moves to be a very good album, indeed.

Released in late 1976, Blue Moves coincided with the peak of Elton John’s career. Two 1975 albums, the autobiographical Captain Fantastic and the Brown Dirt Cowboy and the more lightweight-but-harder-rocking Rock of the Westies, had entered the Billboard Album Chart at #1, the first time this had ever happened once, let alone twice. Hit singles — both album tracks and stand-alone 45s — were rocketing up the charts and concert venues were selling out.

Blue Moves, ushered in by the smash hit, “Sorry Seems to Be the Hardest Word”, seemed destined to continue the Elton John juggernaut. As Restall points out, Blue Moves is an emotionally mature and musically eclectic piece of work, moving from the orchestral ballad, “Tonight” to the hard-rocking “One Horse Town” with ease. But after a few weeks of out-of-the-box sales, a wave of negative reviews – including the famed “What is this tripe?” comment made by music critic Robert Christgau‘s wife – hit hard, and sales of Blue Moves stalled, leaving it to be considered a flop that “only” sold three million copies worldwide. From a strictly commercial point of view, John’s career was seemingly forever changed.

Despite the negativity, John has often spoken highly of Blue Moves, offering this assessment in his 2019 memoir, Me: “It’s a great album, but it’s not exactly the work of two people who are cartwheeling down the street, overflowing with the joys of life.”

Restall encapsulates this history, noting early on that the compelling question that led him to write the book was “why did a successful album fail?”; and that he hoped his exploration of Blue Moves’ afterlife might answer the inverse question, “why did a failed album succeed?”

As can often be found in the 33 1/3 books, Restall tells the tale of how he came to acquire Blue Moves as a 13-year-old boarding school student in England. Restall recalls how he bought Elton John’s Greatest Hits II, while visiting an electronics shop with his mom, but the cassette tape immediately was defective. Returning to the shop, the salesman noted that he didn’t have another copy of the hits collection, but that Restall could have a copy of Blue Moves, already one year old, instead. Restall pouted but grudgingly made the deal, and before too long found himself enthralled by Blue Moves.

This origin story rings true with me: I’m one year younger than Restall — and have never been anywhere near a British boarding school — but I also picked up on Blue Moves after its sell-by date. I found my cut-out copy in a department store bargain bin, a year or so down the line from the album’s original release. I still have that original copy and like Restall I’ve listened to Blue Moves and puzzled over it through the years, but not nearly as often as he has.

Restall writes succinctly and accurately about the music on Blue Moves, but as he notes, he focuses more on the factors, beyond the quality of the music, that led to the album’s fate. These factors include:

Another factor that Restall considers in great detail is the relationship between Blue Moves and John’s other double album of the ’70s, the monster-selling Goodbye Yellow Brick Road. Exploring Blue and Yellow (as Restall calls them) in conjunction with each other provides insight into both albums and Restall makes a strong case that, in some ways, Blue emerges over Yellow as the more immersive and fascinating musical and emotional experience.

Finally, Restall digs deep into George Michael’s fascination with Blue Moves, particularly two songs Michael covered: “Tonight” and “Idol”, a jazz-infused portrait of an aging pop star. Michael’s love of Blue Moves, Restall believes, is a key to understanding how the so-called failure of an album has moved on to have a successful afterlife.

Even today, casual Elton John fans content with a solid greatest hits compilation might not feel the need to plumb the depths of Blue Moves. But anyone wishing to dive deeper into the Elton John discography will inevitably be faced with Blue Moves, and Restall’s Blue Moves will be an eye-opening companion on that musical journey. Those of us who have always had the album playing somewhere in the deep recesses of our musical memories will appreciate Restall’s call to revisit Blue Moves.