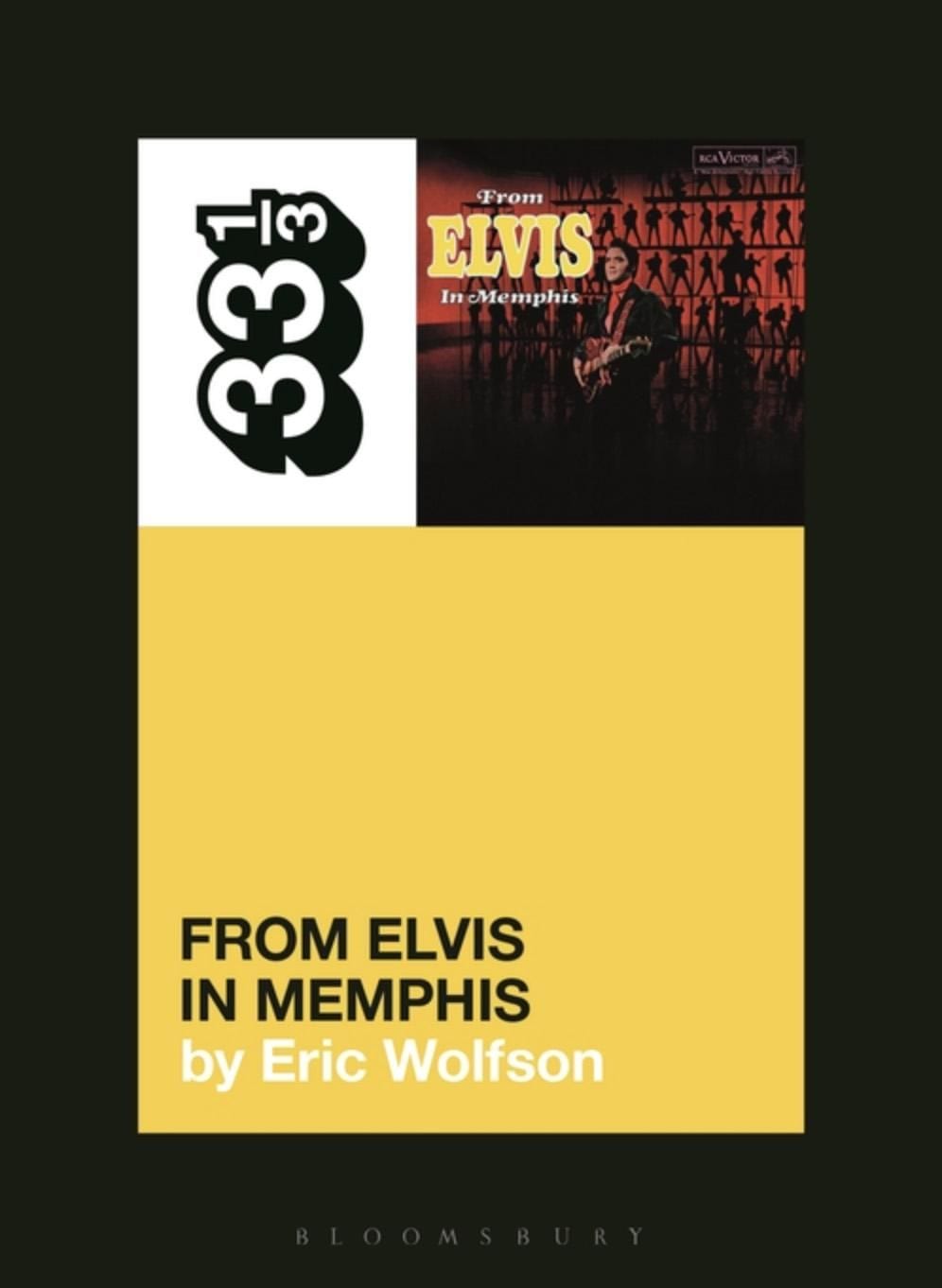 With the exception of his final years of deteriorating health, it would seem far-fetched to describe Elvis Presley in any of his professional incarnations as “down and out”. But by the late 1960s, the massively popular and influential singer was deemed by many as irrelevant. The preceding handful of years produced the Beatles and the rest of the British Invasion, in addition to psychedelia and folk, all competing for the public’s attention while Presley, after his brief stint in the Army, mostly churned out soundtrack pablum and acted in some often – shall we say, inconsequential films. Presley had his day and the world seemed to be moving on.

Fortunately, a lean, mean comeback television special in 1968 helped Presley regain an artistic and commercially successful foothold. It was time to get back into the studio and make a new record.

That record would become From Elvis in Memphis, recorded in early 1969 and released that summer. As part of the popular 33 1/3 series, Eric Wolfson–a dyed-in-the-wool Elvis fan and impressive Elvis historian–dissects, analyzes, and celebrates what many experts consider to be Presley’s finest album. The fact that it was hardly Presley’s most commercially successful album– it only went Gold, while many of his others have gone Multi-Platinum–certainly speaks to the fickle tastes of the masses, which is all the more reason why this particular entry in the series is so important. Elvis Presley’s From Elvis in Memphis makes a strong case for the validity and importance of this album far beyond sales figures.

Bolstered by the success of the 1968 television special, Presley entered the studio in January 1969, but it wasn’t with his usual coterie of session players or even the studios he was used to in Hollywood or Nashville. Rather, Presley went back to Memphis (where it all began) and entered the ramshackle but highly prolific American Sound Studio. Backed by a collective known as “The Memphis Boys” with maverick producer Lincoln Wayne “Chips” Moman, Presley was setting himself up for success.

“Between late 1966 and late 1971,” Wolfson writes, “the Memphis Boys recorded at least 120 charting hits; not a week goes by in this period that they do not play on at least one of the songs in the Billboard Hot 100 – and usually it’s more, upward to 10 percent.” In other words, he was in unfamiliar yet highly capable hands. Moreover, any possible friction from the combination of Presley’s superstardom and the Memphis Boys’ workmanlike professionalism was instantly dissipated, as mutual respect was soon formed. “The Memphis Boys had sensed that something had clicked inside of Elvis,” Wolfson writes. “He was now ready to engage as a creative artist. For the first time in years, Elvis walked into a recording studio and acted like he cared.”

Wolfson’s descriptions of the studio sessions are crystal clear, highly descriptive, and filled with rich musical knowledge. For an artist like Elvis, who contains an almost mythical, impenetrable aura, it’s refreshing to read about these sessions in such an intimate manner. Wolfson writes about late-night sessions where Presley flubs lines and cracks up the band with expletive-filled, off-the-cuff joke lyrics. The individual contributions of band members–including guitarist Reggie Young, bassist Tommy Cogbill, and Gene Chrisman, among others–are meticulously detailed.

After spending the last few years tossing off throwaway singles like “Bossa Nova Baby”, “Do the Clam”, and “Fun in Acapulco”, Presley seems overjoyed and highly motivated at the prospect of singing and recording with a band often considered the artistic equals of Phil Spector‘s Wrecking Crew. The compositions are a handpicked, eclectic, and sophisticated bunch, including the sexually charged blues of “Power of My Love” a laid-back take on “Gentle on my Mind”, Hank Snow’s country standard “I’m Moving On”, and Mac Davis’ “In the Ghetto”, a rare occasion for Presley to wax emotional on the subjects of racial and class struggle.

Wolfson points out the significance of “In the Ghetto”–released as a single from the album, becoming his first US Top Five single in six years–by placing it in the context of current popular music. “For the first time in years,” he writes, “since the Beatles and Bob Dylan redefined rock and roll–an Elvis song truly resonated. If it didn’t place him on the forefront of cutting-edge rock and roll per se, it repositioned him as a serious competitive artist, a real contender. ‘In the Ghetto’ proved that Elvis still mattered– and that his music still had something to say.”

The song was a huge hit, but not as big as “Suspicious Minds,” a song recorded during the American Sound sessions but released as a standalone single in August 1969 and becoming Presley’s final US Pop Number One. While From Elvis in Memphis may have been more of an artistic triumph than a commercial one, it certainly yielded a good deal of chart success.

Still, the critical success of From Elvis in Memphis was largely short-lived. Some subsequent singles, such as “Burning Love” and “Always on My Mind”, saw the artist reaching impressive peaks, but Wolfson writes that Presley was “largely sleepwalking through his 1970s recording sessions like he sleepwalked through his 1960s films. As an album of inspiration, talent, and vision, Elvis would never top From Elvis in Memphis.” Like the best books of the 33 1/3 series, Wolfson’s contribution brings alive an album that may be largely unknown to music fans but deserves serious appraisal–and gets it.