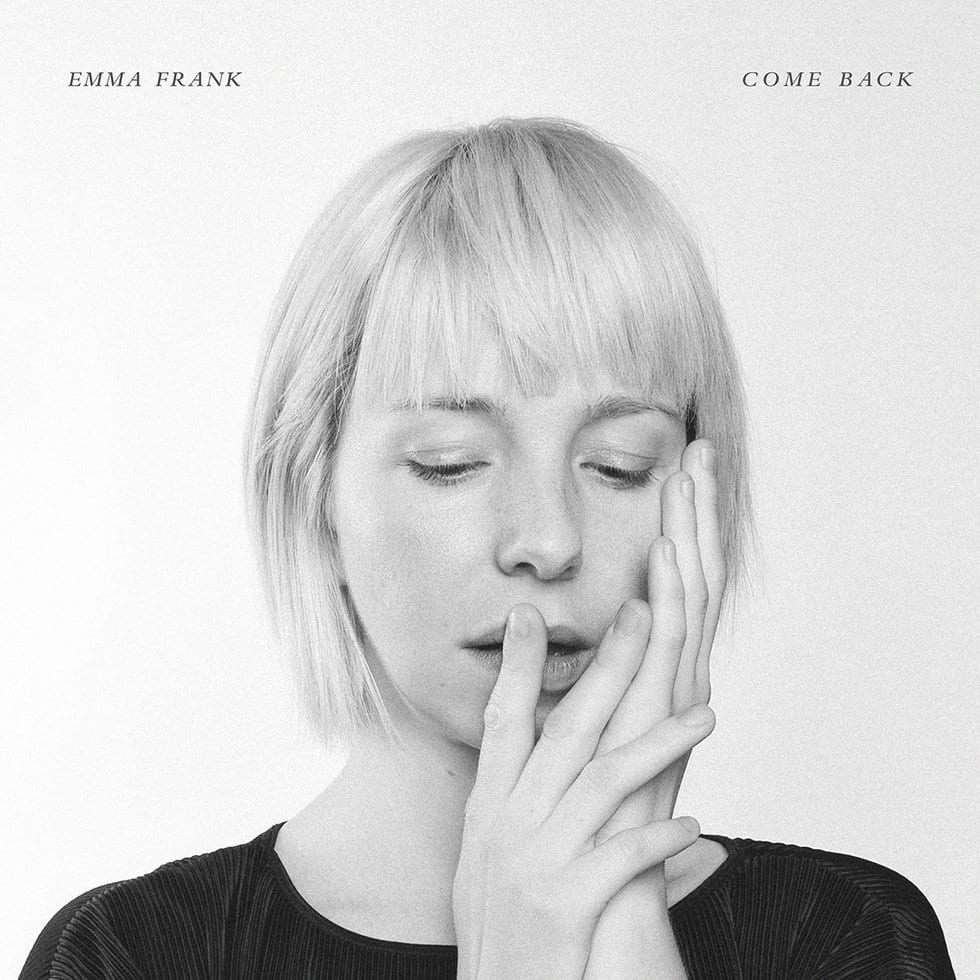 Emma Frank‘s 2018 recording, Ocean Av, was her first after moving from Montreal to New York, where she met and started collaborating with jazz pianist Aaron Parks. The partnership yielded a delicate kind of magic, weaving together jazz harmonies and texture with a vocal approach closer to indie pop or folk music. Frank had been playing with jazz musicians before, discovering her intensely subdued voice, but the 2018 recording was a leap upward into modern art song.

Come Back is just that—an even more intimate collaboration with Parks that brings us back to Ocean Av‘s strengths while moving onward slightly. It is a return to a space in which Frank and Parks had more exploring to do. And the result is, again, airy but marvelous.

Parks brings a piano style that can be deceptive—one recognizable from his own “jazz” recordings but, with Frank, given a natural home in songs that live outside that specific style. He strums the keys, creating a gentle, rhythmic pulse that animates her melodies the way an acoustic guitar used to buoy Joni Mitchell’s guileful, unmistakable songs. And, as with Mitchell’s body of work, Parks stirs in flashes of harmony that almost no folk or rock song would have use for. Parks doesn’t take many “jazz solos” on Come Back. This is decidedly not the album of a singer-songwriter who has hired some jazz players to throw in flashy improvisations around her heartfelt pop songs. Instead, Parks and Frank are a unit. She makes sense of his playing in a new way, and he seems to complete her in this set of nine miniature heart-tuggers.

Frank contributes much more than her hypnotizing, undersung voice. The voice itself, its sound and texture, is closer to Suzanne Vega than to Joni. But like the latter, Frank crafts lines of melody that turn in surprising directions. Whether she had to find jazz musicians as accompanists because she had this quirky sensibility or whether jazz harmonies acted as maps leading her songs in these directions, I don’t know. But the marriage is seamless and natural.

As importantly, the slightly tart or unusual direction of the songs is complemented by literate lyrics that, nevertheless, cut to the center of the heart. As on the last recording, Come Back is chock full of songs that address romance—that delicate, unsure, wondrous, essentially human thing—as poetry and yearning. Given that Frank and Parks manage to find original hooks amidst their mixture of songcraft and jazz, these love songs feel like they should be radio hits in some new era of grown-up pop music that surely ought to be ushered in by the likes of artists like Frank, Becca Stevens, and a few others. I know, I’m just fantasizing this, but a person gets to dream, right?

Several of the tracks are exposed duets between the singer and the pianist, and they shine brilliantly. One standout happens to be the sessions’ single cover. “Either Way” is just Parks’s piano and Frank’s voice (with just a touch of added guitar or electric piano for brief seconds), etching a story composed and written by Jeff Tweedy. “Maybe the sun will shine today / The cars will roll away / Maybe I won’t feel so afraid / I will try and understand, either way.” Parks plays a simple, repeated arpeggio figure beneath this, adding basic chords. He is barely there at first and then around and amidst the second verse adds more light in the form of right hand licks that rise and limn the vocal gorgeously. Frank adds, “Maybe you still love me, maybe you don’t / Either you will or you won’t / Maybe you just need some time alone / I will try and understand / That everything has its plan, either way.” That is the whole song, but the sophistication of it, its complexity, is in how Frank and Parks caress it together.

The effect of the song’s simplicity and use of repetition is one of economy and clarity. It achieves emotional immediacy because the two voices speak to each other and mirror each other just about perfectly.

Parks and Frank collaborated on an original tune, “Lilac”, also played as a duet. Parks’s composition, a bouncing delight that evokes the memory of a great Laura Nyro tune, perhaps, seems made for a lyric. Frank sounds delicate but sure, her voice natural and conversational but gaining just the right strength with bits of vibrato where she needs it. “Lilac, will you come back,” she sings, “Seems so long since you kissed my face / Everything in time you left behind / Will come flowing back / And guide you up, guide you up.” Nothing about this duet is flashy, including Parks’s simple and chiming solo. Not flashy but strikingly in place.

The piano and voice, now with a band, run in unison lines for much of Frank’s original tune “Promises”. Parks’s left hand and bassist Zach Lober play a syncopated pedal tone as the vocal and piano follow a toggling melody that bobs up and down in unusual intervals, wide and minor and then descending. It is a mysterious sound supplemented by subtle synthesizer washes that blossoms into a sunlit chorus. “By your side / Promises / Only time will tell.” The bridge section after the second chorus explores the ideas of the jagged verse in concise arcs of variation. Parks never solos, but his etching of atmosphere is as ingenious as how he makes the piano sing along with Frank. “Two Hours” is another moody ballad, this one supplemented by subtle string playing. These ballads both suggest how jazz and indie rock can find common ground where melody, harmony, and texture find a balance that isn’t afraid of being ambiguous but emotional.

Not all the tunes are slow, but nearly all tug at your heart somehow. “See You” is built on a thumping groove established by drummer Tommy Crane and Lober, with Parks dancing around the groove using his trademark thrumming piano style. Frank sings a punched melody, but the lyrics are darker. “Heartbroken again / Always something with no beginning and no end / How I see you when I see you / Hope this feeling passes by again.” The chorus starts with the phrase “When our love is over”, but the surging optimism of the trio’s music behind it keeps you wanting more. Parks is continually sliding into irresistible licks that lead to the next vocal phrase. It’s a small stroke of inspiration, then, to end the song with the drums, the piano, bass, and wordless voice tracing an elegiac circular pattern, overdubbed with harmonies and traces of synthesizer.

The opening track, “I Thought”, also sports a backbeat, though this one keeps falling back into a melancholy established by the lyrics and harmonies. Production work by guitarist Franky Rousseau is fabulous, with strings, chiming synths, rising piano licks, and layers of dreamy singing all coming together. Frank’s lyric, about a romance that just can’t quite make it but still seems to have some hope, is gorgeously supplemented by the orchestration. Rousseau has also created a compelling sound for “Before You Go Away”, a plea by Frank to a lover that he should keep in touch against the odds. This tune has the least amount of Aaron Parks on it, sounding more like a pop song, with harmony sweetening the line that gives the songs its title. But the exquisite quiet of it all keeps the song from curdling in the slightest.

Not everything seems complete on Come Back, as nearly perfect as the album is. The 83 seconds of “Dream Team”, a floating instrumental, seems like it should have been more rather than just an interlude. And then one of the recording’s best songs is simply cut off at the moment when it might have launched. “Sometimes”, is a sophisticated pop song that takes a couple of unexpected harmonic turns without losing the listener in an unnatural melodic shape. The lyrics are just two short sketches of regret and thanks in a tricky mixture. “There’s no taking back the pain I’ve caused / There’s no time left / I know sometimes I feel the light surrounding me / And sometimes feel the rain falling down / And faraway I feel you holding on to me.” Parks dances around these sketches with a solo piano part that is enchanting, a rolling and bouncing pop confection with the gospel groove of Keith Jarrett leaping out in short interludes. But, after its second verse, the tune is simply faded down on the mixing board, as if someone hit a bad note and they just didn’t feel like doing another take.

These seem like quibbles, however, when considering a recording as enchanting and telepathic as Come Back. Parks and Frank have a wondrous thing going, seeming like Joni Mitchell and Wayne Shorter, perhaps. These two voices are simply meant for each other, one from jazz and another from a land of literate folk-pop that turns out to have a quirky connection to harmonically daring arrangements. Frank is the icy cool heart, beating and quivering inside Parks’s natural, rolling, warm piano style.

Come Back is, hopefully, only the second chapter in a pairing that makes a plainspoken kind of magic.