There’s weird, and then there’s Weird. Eric Haven‘s work is both. He takes an idiosyncratically weird approach to the horror genre of the Weird to produce a hybrid graphic novella that belongs to no genre but his own.

Haven models his title on the cover of his latest work, Cryptoid, on the classic 1950s’ horror comic Tales from the Crypt, but with intricate red lines that suggest a circulatory system, making the letters appear semi-living. The suffix “oid” means “resembling”, but rather than being crypt-like, a cryptoid is apparently a kind of hybrid creature: part animal and part whatever the hell Haven’s car-crash of an imagination can conjure next.

There’s a Mankylosaurus (half human, half ankylosaurus) grazing at a restaurant salad bar. There are nine types of bat hybrids (half ant, eyeball, octopus, penguin, bear, nose, hand, and batman). The Resister is a half-human, half-eagle superhero battling Donald Trump and his evil, oozing, gray-skinned, tentacled Dark Lord, Steve Bannon. I don’t know what exactly the superhero-oid Nightsword is, but Haven lifted the wheeled but human-headed android Box directly from Michael Anderson’s classic ’70s sci-fi film Logan’s Run. The Gnome looks like the garden variety found in lawn care stores—except his origin story involves his starting out human, drowning in a flash flood, and then coming back to life while inexplicably shrinking to garden-gnome size.

After living in the miniature wild for years, he returns long-bearded to his astonished wife, crashing through their bedroom window on the back of a “flightless running shrieking bat.” Despite his changed appearance (why is his cap pointed now, and how does a hoodie grow into a tattered cape?), she says his name instantly: “Roger?” He stares back, as Haven draws a succession of panels zooming into his eyes and the ocean rolling inside them—which transitions into the actual ocean and a monstrous being emerging from the Mariana Trench.

That’s the kind of peculiar transition Haven supplies between most of his interlocked vignettes. Technically, Cryptoid might be a collection of short comics (you can find part of the character, “The Resister” at Haven’s website ), but I would still call this a graphic novel because of its repeating characters, motifs, and structure. The internal logic of each scene may feel random, but the larger design is carefully constructed with nesting narratives. 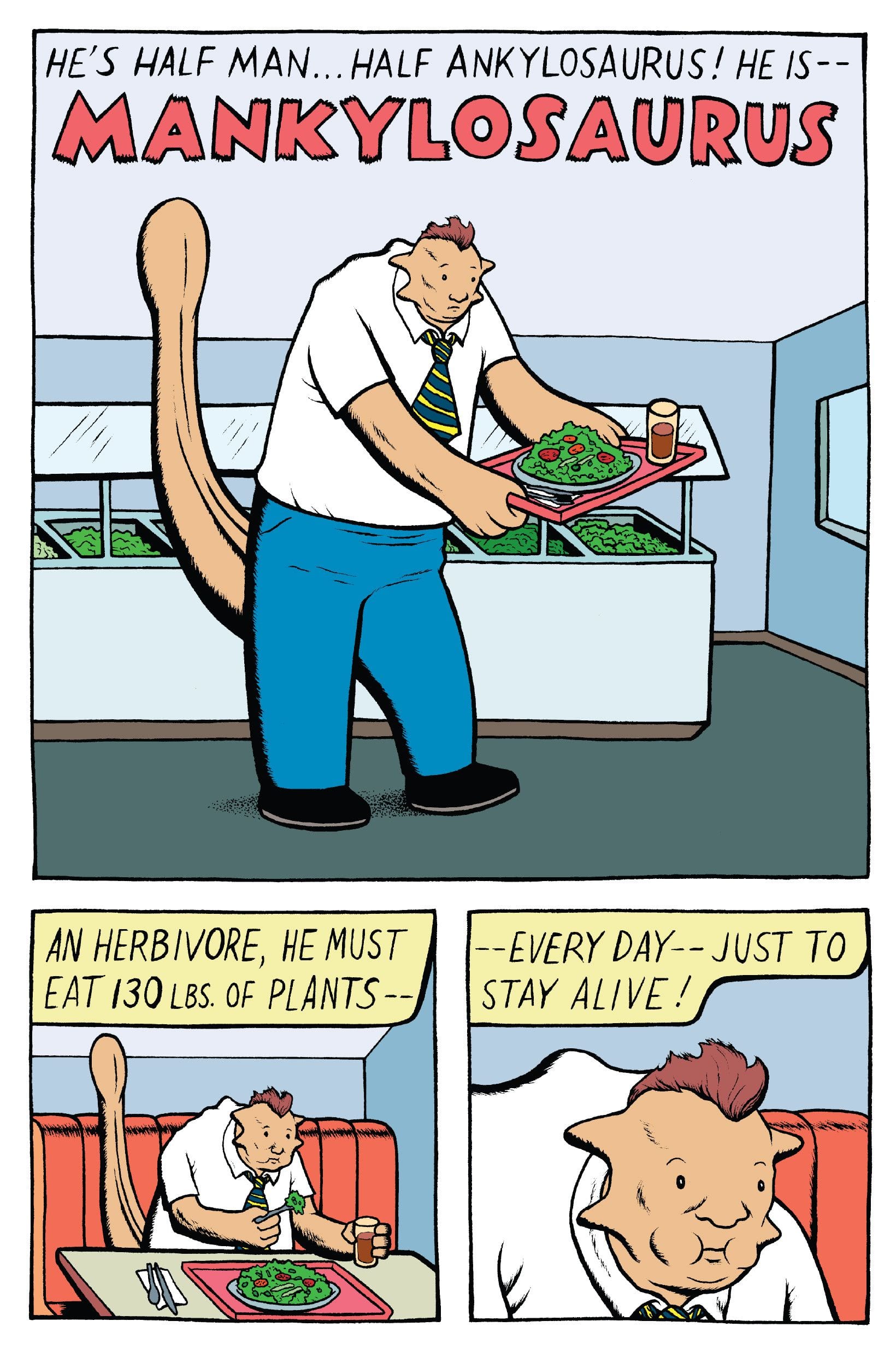 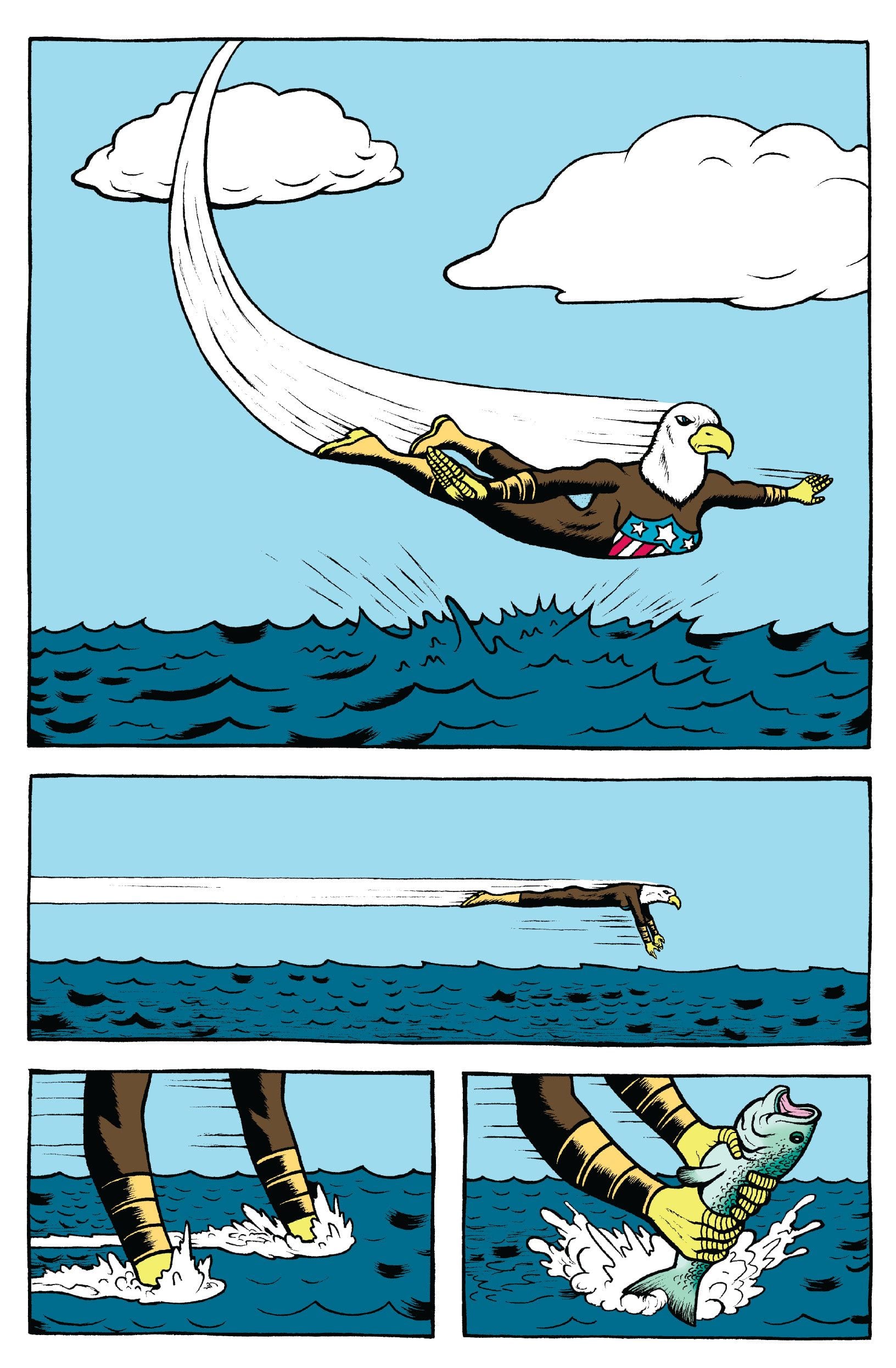 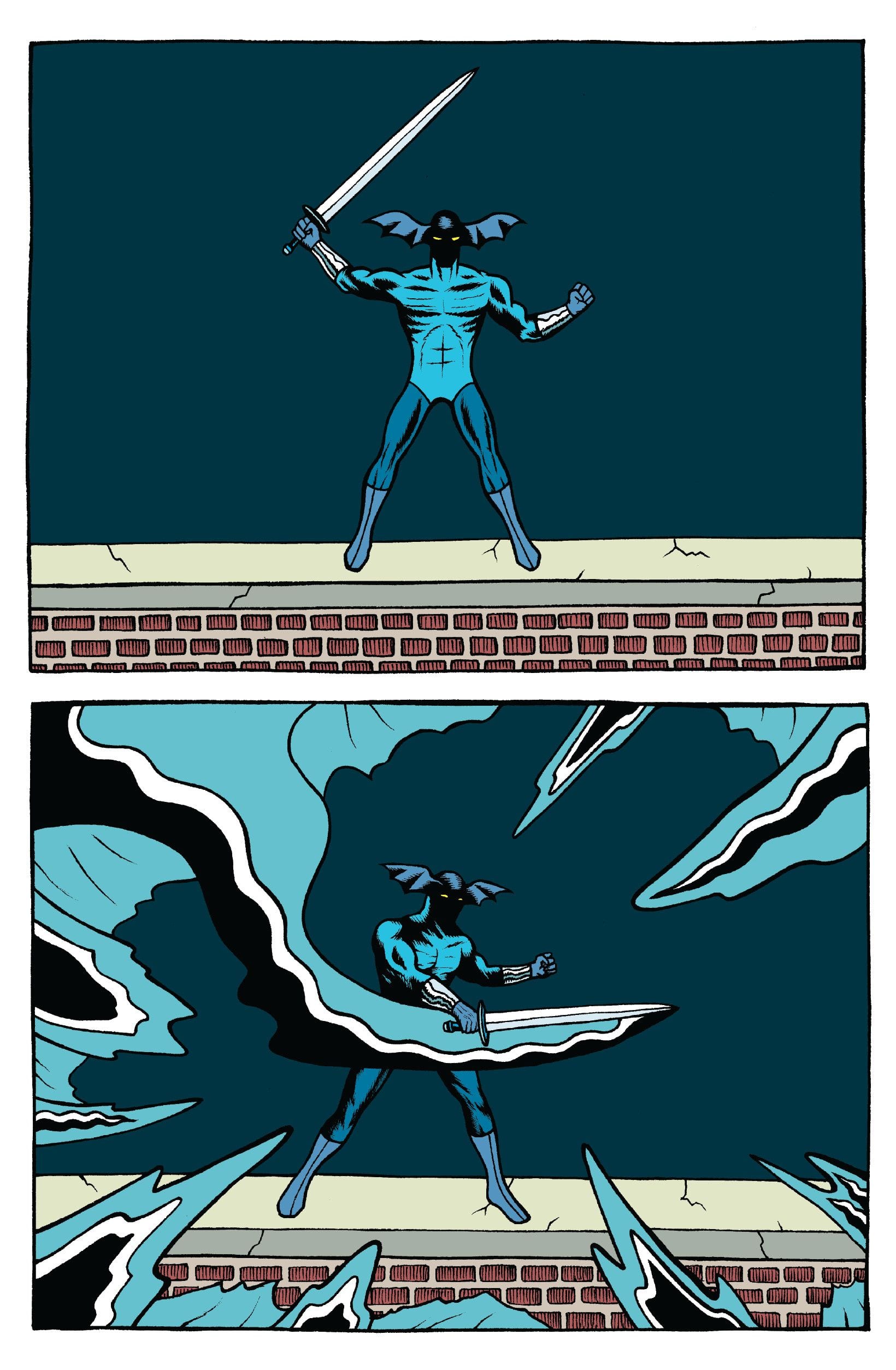 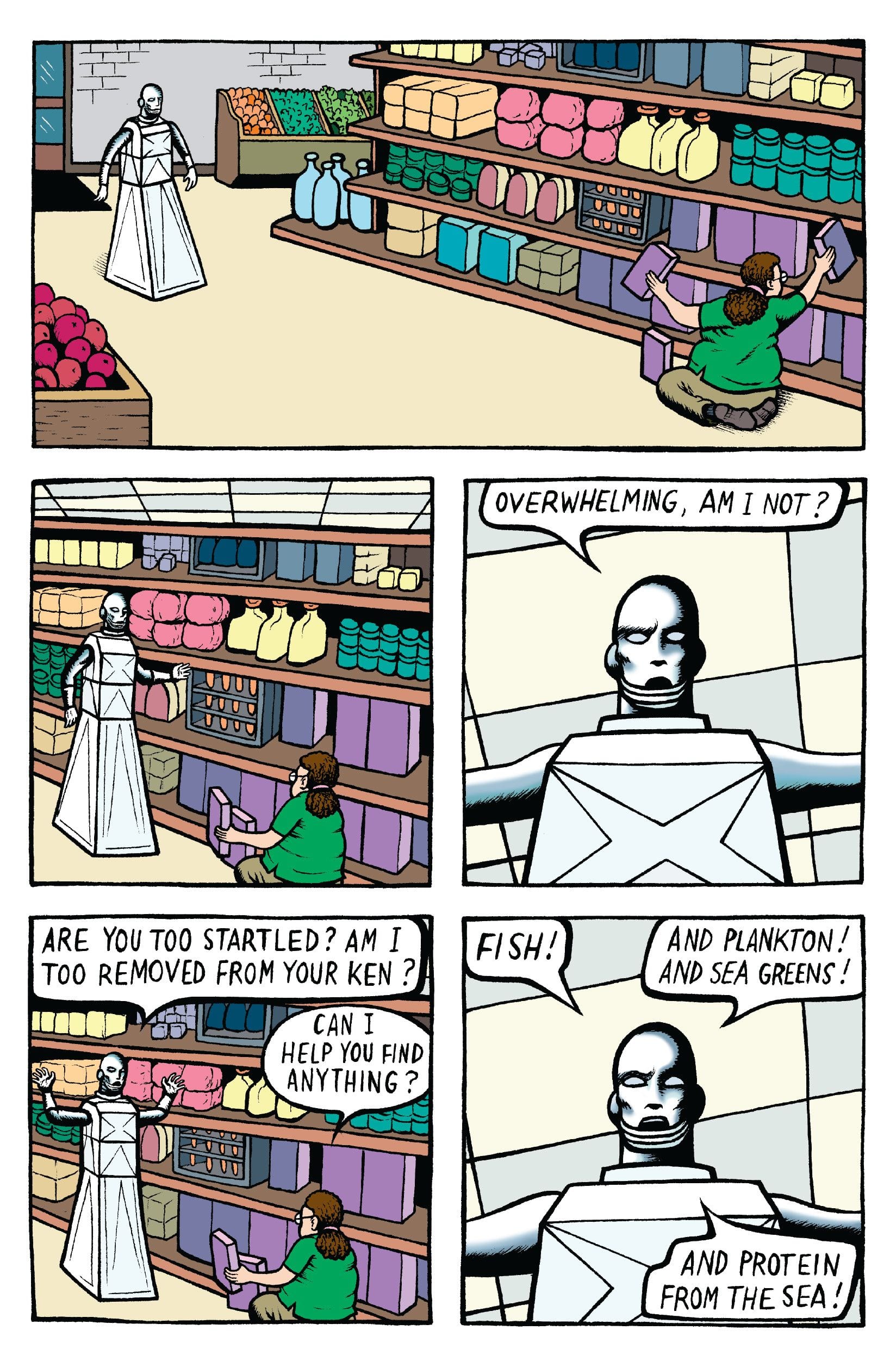 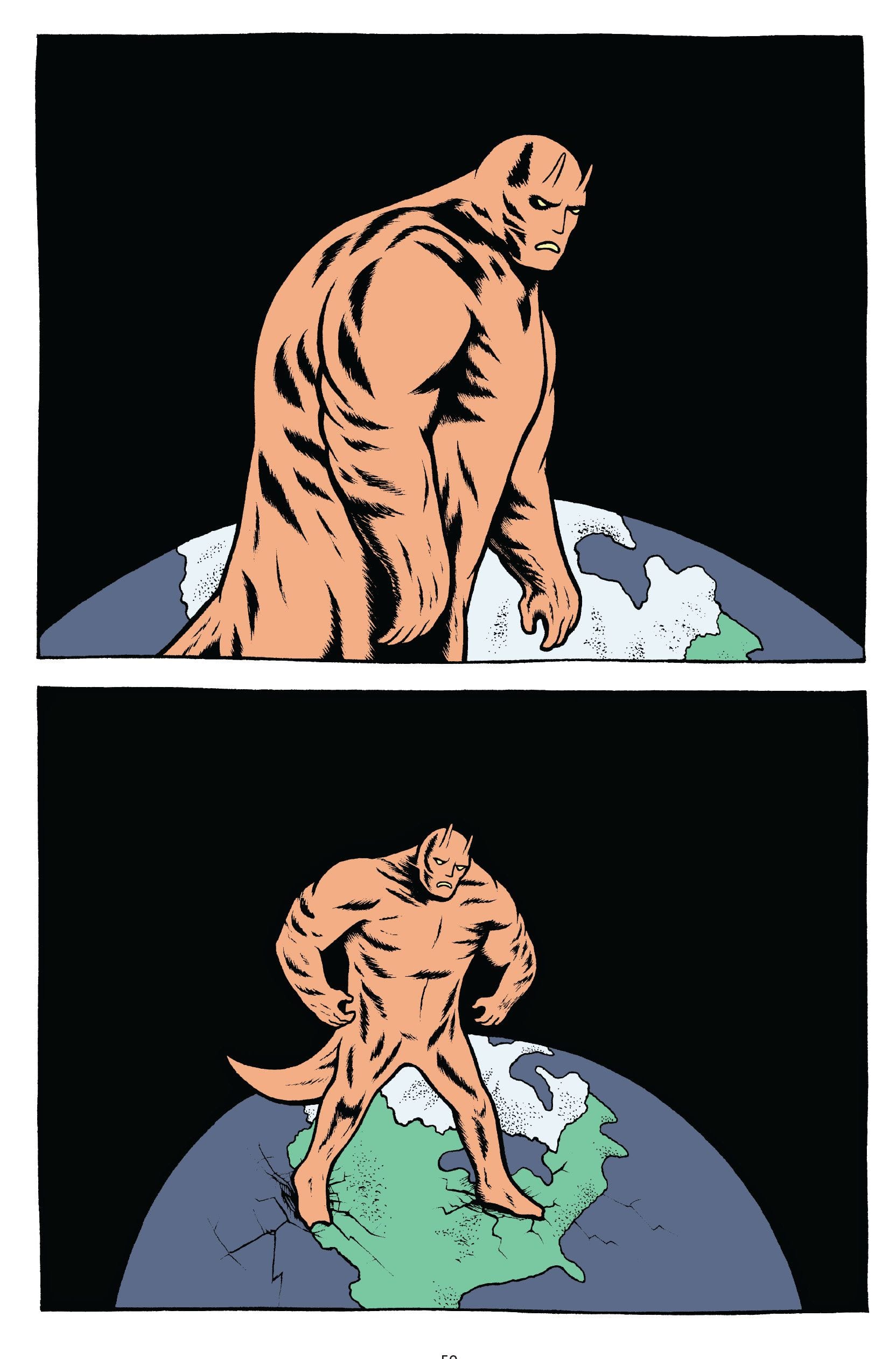 After a title-page sequence, the story opens with an alien face staring back at the viewer and then down at the Salad Bar where Mankylosaurus appears before going to sleep in his bed. After the bats and gnome escapades and that unexplained creature rising from the deep, Haven draws two back-to-back superhero sequences, The Resister and then Nightsword, followed by Box’s adventure supermarket shopping. Then the creature from the deep continues his ascent in the second half of the now-titled “He Comes Slouching” (an unlikely allusion to Yeats’ apocalyptic poem “The Second Coming”), before Mankylosaurus wakes from a nightmare. Meanwhile, alien watcher continues his silent observations.

If that doesn’t sound like the plot of a typical graphic novel, it’s not. Haven isn’t interested in narrative. Cryptoid follows the logic and aesthetic of pastiche. Many of the images echo classic comics. Though Haven references EC Horror titles from before the company was hobbled by the censorship code in 1955, Marvel artist Jack Kirby may be the bigger influence. That silent alien giant staring down at the globe of the Earth is a riff on Kirby’s Watcher from his early ’60s Fantastic Four comics. Kirby drew dozens of monster titles in the late ’50s for Marvel’s pre-Marvel incarnation Atlas Comics. Even if the visual allusions are not all apparent, one of the pleasures of Cryptoid is intuiting the overlay of references filtered through Haven’s idiosyncratic style.

Despite the superhero references, Haven’s action poses are aggressively un-heroic, suggesting the anatomical awkwardness of posed toy action figures rather than the grace and power of superhuman forms. Nightsword opens with a sequence of full-page images zooming in slowly to the character standing on a roof edge as if positioned there by a child’s hand. When the pages split into double panels, his figure raises an arm while the rest of his body remains unchanged—again as if the same child is hovering just out of frame, adjusting his joints between images. The effect is absurd in both appearance and pacing.

Next Haven draws unexplained swirls in the twirling sword’s wake, each an apparent gap in the fabric of reality. But what they are doesn’t matter. Haven just wants his viewers to look at them as they widen and cascade and consume whole panels. Eventually Nightsword’s squiggly body reforms from the tentacle-like swirls. What does this mean narratively? I have no idea. But the lack of narrative significance is part of the point.

Despite the horror and superhero surface material, Cryptoid may be best understood as a kind of abstract comic. Often the incremental panel-by-panel transformation of shapes and colors is the primary content, not the nominal action of a soon-to-be-forgotten character. We are like the watcher staring silently down at the peculiarities of Haven’s world, content to observe without intervening or even judging, indifferent to the plight of individuals but entertained by the odd and endless cycle of change.