There comes a point in every superhero time travel story when the damage to the timeline becomes untenable. Sometimes, it takes too long to get to that point and when functional time machines are involved, that’s saying something. It’s debatable whether the original five X-men — as ripped from the earliest issues of Uncanny X-men — have gotten to that point, but the circumstances surrounding Extermination #1 make a pretty convincing case that their time has come.

The reasons why the time-displaced X-men came to the future and stayed there are now obsolete. Cyclops never causes a mutant genocide. Jean Grey doesn’t stay dead. Angel doesn’t permanently lose his mind. Iceman doesn’t stay in the closet. Everything that once horrified these characters about the future no longer applies. It makes their continued presence both superfluous and confusing. Ed Brisson and Pepe Larraz promise to resolve that with Extermination.

This necessarily requires more time travel and all the timeline-twisting machinations that come with it. As Back to the Future so eloquently demonstrates in 1985, the source of the temporal disruption must also be the solution to some extent. The events of Extermination #1 just add more urgency, as well as a new threat that promises to step up the timetables, literally and figuratively. 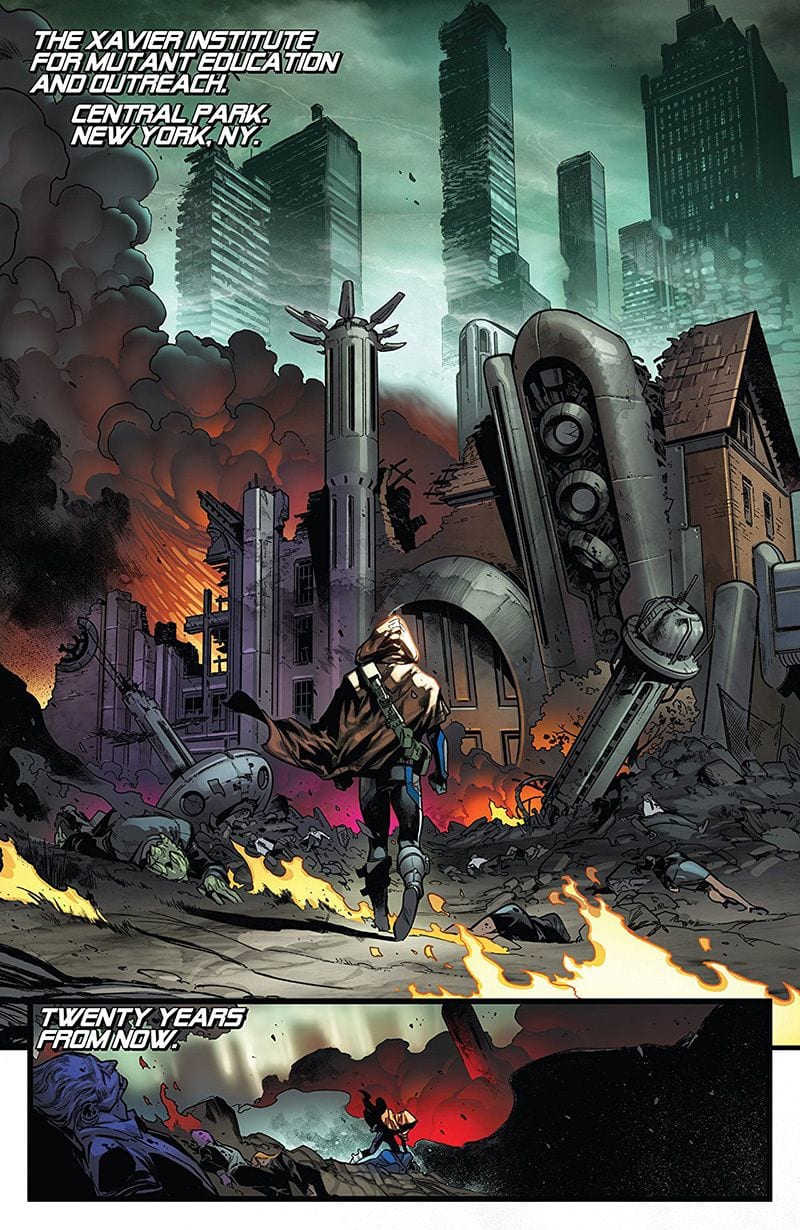 The nature of that threat is vague, but it involves familiar names. Things happen fast and suddenly. Big messy battles unfold, giving Larraz plenty of chances to create stunning visuals. There are also multiple casualties, each of which have weighty implications. However, since casualties in a time travel story are often tenuous at best, the drama is limited. Despite this temporal barrier, Brisson and Larraz find plenty of ways to inject it into the plot.

The stakes go beyond the integrity of the timeline. They get personal very quickly and hit the time-displaced X-men right in the proverbial heart. Some get hit harder than others and the emotions from characters like Cyclops and Jean Grey are palpable. For a time travel story, which often relies heavily on sub-plots laden with sci-fi technobabble, this kind of heartfelt anguish is refreshing. It makes Extermination #1 feel like something other than a time travel story, of which the X-men have many.

However, some of that melodrama comes off as forced. In between the destructive battles, the personal dimensions of the conflict emerge from outstanding side-plots that have been unfolding among the time-displaced X-men in recent years. The overall structure of Extermination #1 doesn’t rely too heavily on it, but it doesn’t complement it, either. There are even moments that don’t entirely mesh with recent developments in the books that precede it. 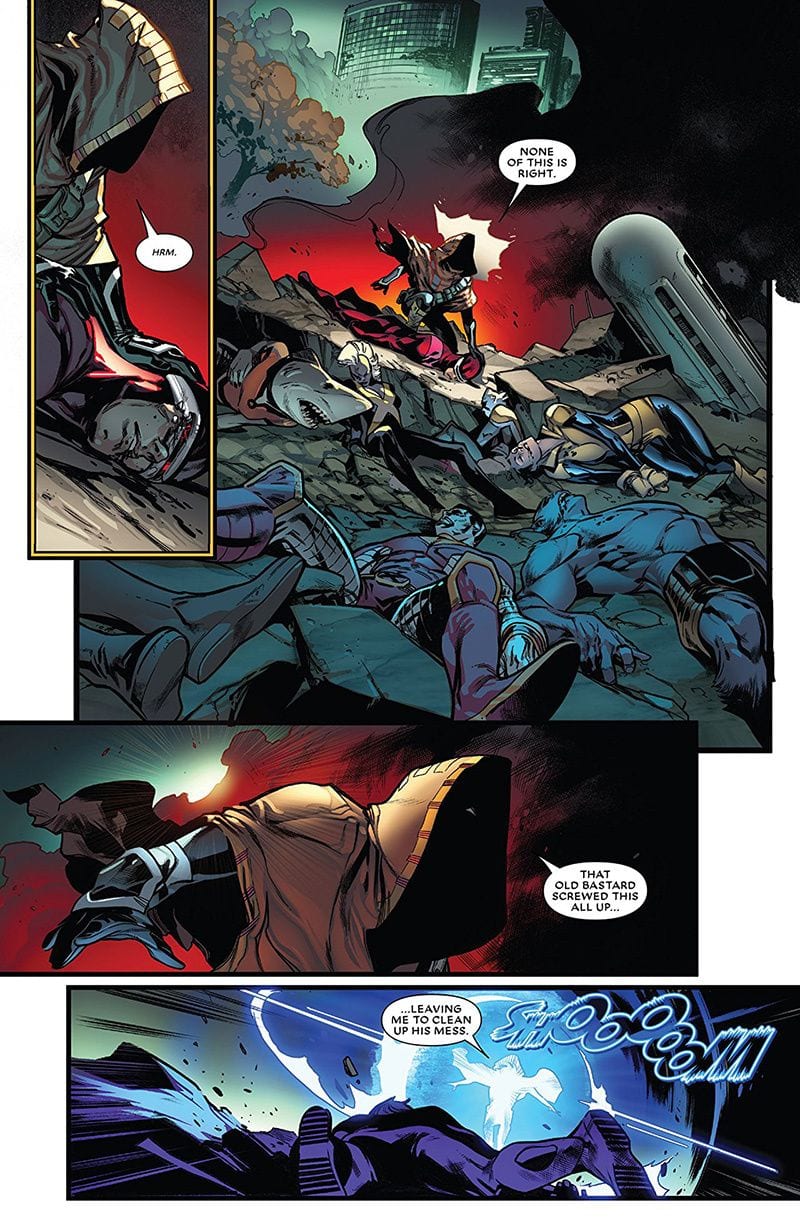 The moments between Teen Cyclops and Bloodstorm don’t really match with what has been going on with them in X-men Blue. There’s an implied connection between them, but one that comes off as contrived for the sake of increasing the impact. The moments between Teen Jean, Rachel, and Cable also assume a lot about the relationship they have. While past issues of All-New X-men and X-men Gold establish that they are aware of one another, there’s little indication that they’ve fleshed it out to any meaningful extent.

This doesn’t make the events in Extermination #1 less coherent, but for anyone who has been following the journey of the time-displaced X-men, it feels disconnected from their over-arching story. To some extent, this keeps the story from getting bogged down by continuity. At the same time, it also overlooks the larger implications of the original five X-men’s presence in the future.

That’s not a requirement to making the plot work, though. The time-displaced X-men don’t need to have a deep, well-developed relationship with every character involved. Just knowing who Rachel and Cable are is enough to understand why the events that unfold are a big deal, both for original five X-men and the integrity timeline. It effectively shoves the cold, hard truth in their face in a way they can no longer ignore. Their presence in the future cannot continue. This is the end of the line for them and there’s no scenario in which they can stay without incurring greater losses. 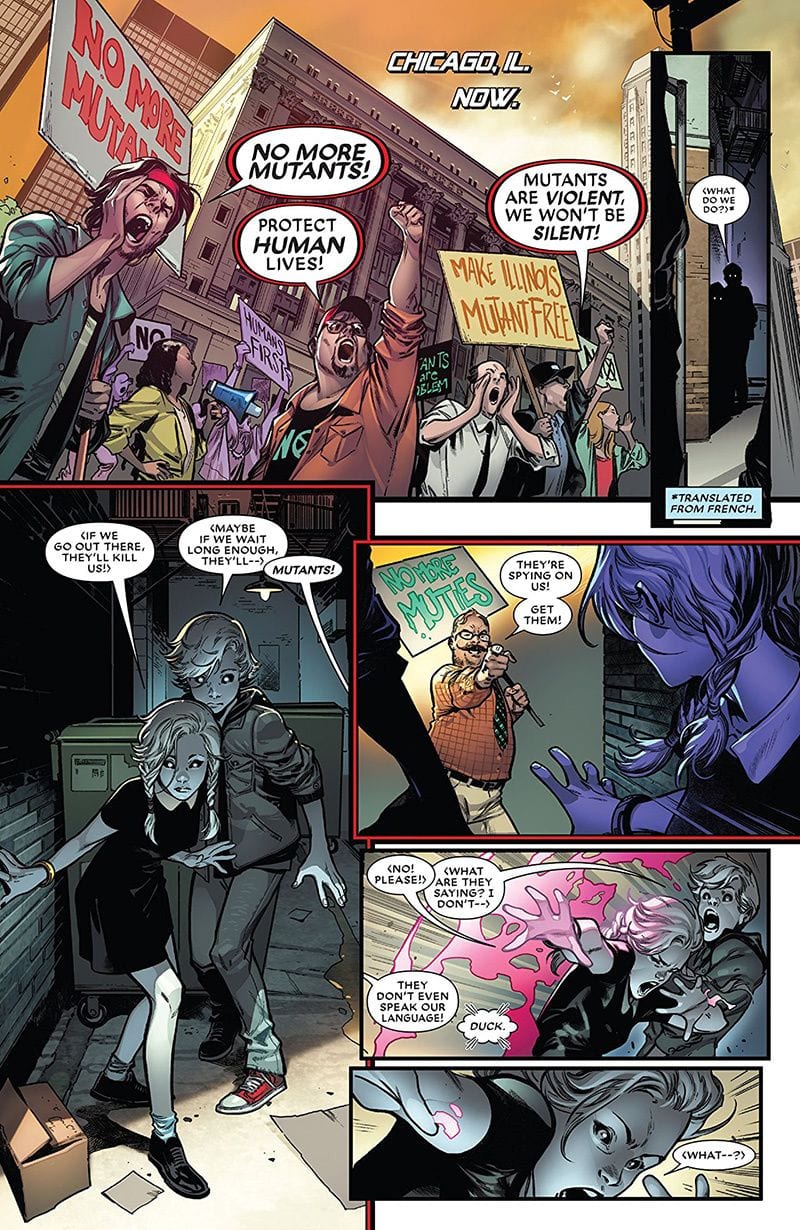 That’s the underlying message of the story and Brisson effectively belabors that. Some characters, namely Teen Cyclops, openly acknowledge that they have to go back to their own time at some point. They even understand that has to happen soon, but there are a lot of factors keeping them in the future, including the unpleasant fact that one of their future selves is still dead. Like any approaching time paradox, though, they don’t get much say in the matter.

When the past, present, and future finally catches up to the time-displaced X-men, it’s abrupt, yet necessary. There’s a sense that there has to be consequences to their being in the future for as long as they have. Some characters suffer more than others and it weighs heavily on the time-displaced X-men. It also sets the stage for a much bigger, much more personal confrontation with two familiar characters who have a tendency to show up in dystopian futures.

Even with all these personal and temporal connections, there isn’t a sense that what happens in Extermination #1 is a culmination of everything the time-displaced X-men have done. There’s no critical mistake that puts them past the point of no return. Forces they neither control nor know about simply catch up to them and make them pay for daring to have personal attachments in the future. It’s a common consequence of time travelers, but one that has just enough depth to work.

Extermination #1 succeeds in firing the first shots in the conflict that will ultimately send the original five X-men back to the past. There’s little mystery as to who is behind it. Brisson doesn’t drag anything out but still leaves room for plenty of intrigue. The situation is dire, but it isn’t hopeless, and since the X-men are always one misstep away from creating another dystopian future, that counts for something.