Fab 4 Mania: A Beatles Obsession and the Concert of a Lifetime
Carol Tyler
Fantagraphics

“When I say ‘I love the Beatles!’ I mean it and it’s REAL. NO DENYING IT. You can surely tell when you are around me or in my room. THEY ARE THE GREATEST. I think between them being so great and me being so loyal, I’m pretty sure I will feel this way until I am old and really really old. It’s a whole life ‘Fascination.’ I knew falling in love happened with marriage and stuff, but I didn’t know it could happen with musicians. (p.85)”

Carol Tyler’s Fab 4 Mania: A Beatles Obsession and the Concert of a Lifetime, documents in real time her love of the Beatles, culminating in her attendance at their 1965 concert in Chicago’s Cominskey Park. Spanning her eighth grade year and the summer before entering high school, Tyler’s growing adoration of the band, complete with fan club remembrances, obsessive radio listening, and her determination to see them live, makes the book feel authentic and relatable throughout. That preeminent Beatles historian Hunter Davies wrote the Introduction only gives it further Beatles cred.

Tyler’s diary entries are culled from a real-life keepsake book she kept at the time and they’re filled with her 13-year-old observations of not only her total devotion to the Beatles, but also her parents, grouchy, soon-to-enter the convent sister, older brother and his annoying friends, and her own equally Beatles-obsessed friends. Beginning with seeing the Beatles on The Ed Sullivan show on 9 February 1964, Tyler’s instant enthusiasm for the band is reflected in her detailed reminiscences that include what songs they played, how the stage was set, and even the way in which Ed Sullivan introduced them (“The BEAT-les”). It’s Tyler’s consistently specific memories that repeatedly place the reader in the moment, and also reinforce the fact that a teenage girl is telling the story. 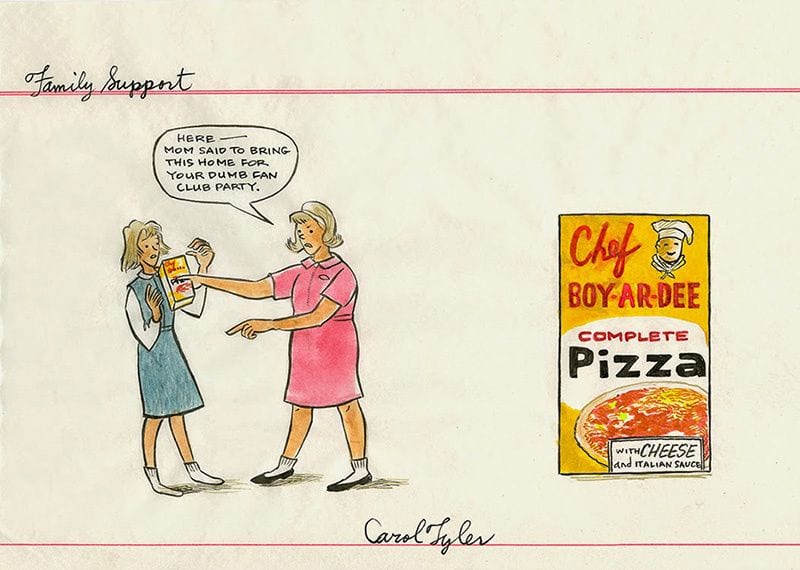 In fact, it’s by keeping her young self as the main narrator of the story that Tyler brings realism to a highly relatable time for many readers. The music of one’s youth, particularly those bands that become important early on, remain important in ways that music loved later in life can never approach. Even when those first-cherished bands become less than beloved, that music will always inspire a visceral return to that time. When that band is also the Beatles at the height of Beatlemania, the excitement and seemingly never-ending thrill practically leaps from the page.

Much of the story is framed by Tyler’s determination to see the Beatles the next time they come to town, especially since she was unable to get tickets the last time they came around. (“There are rumors that they are coming back again this summer, and if I don’t get to see them, if I miss them again I WILL DIE. I HAVE to see them. It’s like water or air.”) As the president of her local Beatles fan club, she’s not only eager to see them as a fan, but also in her professional role. When Tyler’s tickets finally arrive, the careful rituals begin as she seals them in plastic (much to her father’s ire, as he’d had plans for the plastic sheeting she cut it from), buys a new outfit, and makes a Beatles 4-Ever sign she hides in an umbrella, waiting for the perfect moment to unfurl it during the concert.

The section of the book devoted to retelling the concert experience is aptly titled “37 Minutes of Madness” and is written in an immediately striking red pen with quickly drawn sketches. Tyler quickly committed her experience to paper upon her return home and her exhilaration comes through perfectly. The details, from the other concertgoers around them (who shared their binoculars), to seeing Brian Epstein in the dugout (arms folded, “very business-like”), to her first time hearing the song “I’m Down” as the concert closer (“I never ever will forget it.”) all bring to life not only the concert, but more importantly, Tyler’s concert-going experience. As the culmination of her Beatles love at the time, the concert feels satisfying and earned in a way that speaks to Tyler’s effective storytelling.

Fab 4 Mania is a glimpse into a time important in popular music history, yet more than that it’s a window into the life of a teenage girl brimming with excitement for every moment related to her favorite band. All the while she spends time with her family (a vacation to Tennessee to visit her grandparents is an especially idyllic peek into the carefree times of youth), hints at early romantic feelings (at least for a non-Beatle) for her brother’s friend, Jim, and spends a summer babysitting and floating all day in the lake. As her Beatles obsession is peppered with the seemingly ordinary day-to-day moments of her life, they both take on an increased significance. It’s Tyler’s innocence and honesty that make the book so effortlessly endearing. While many strive to achieve the authenticity of such a time, Tyler does so naturally and with a charming humor and sincerity.