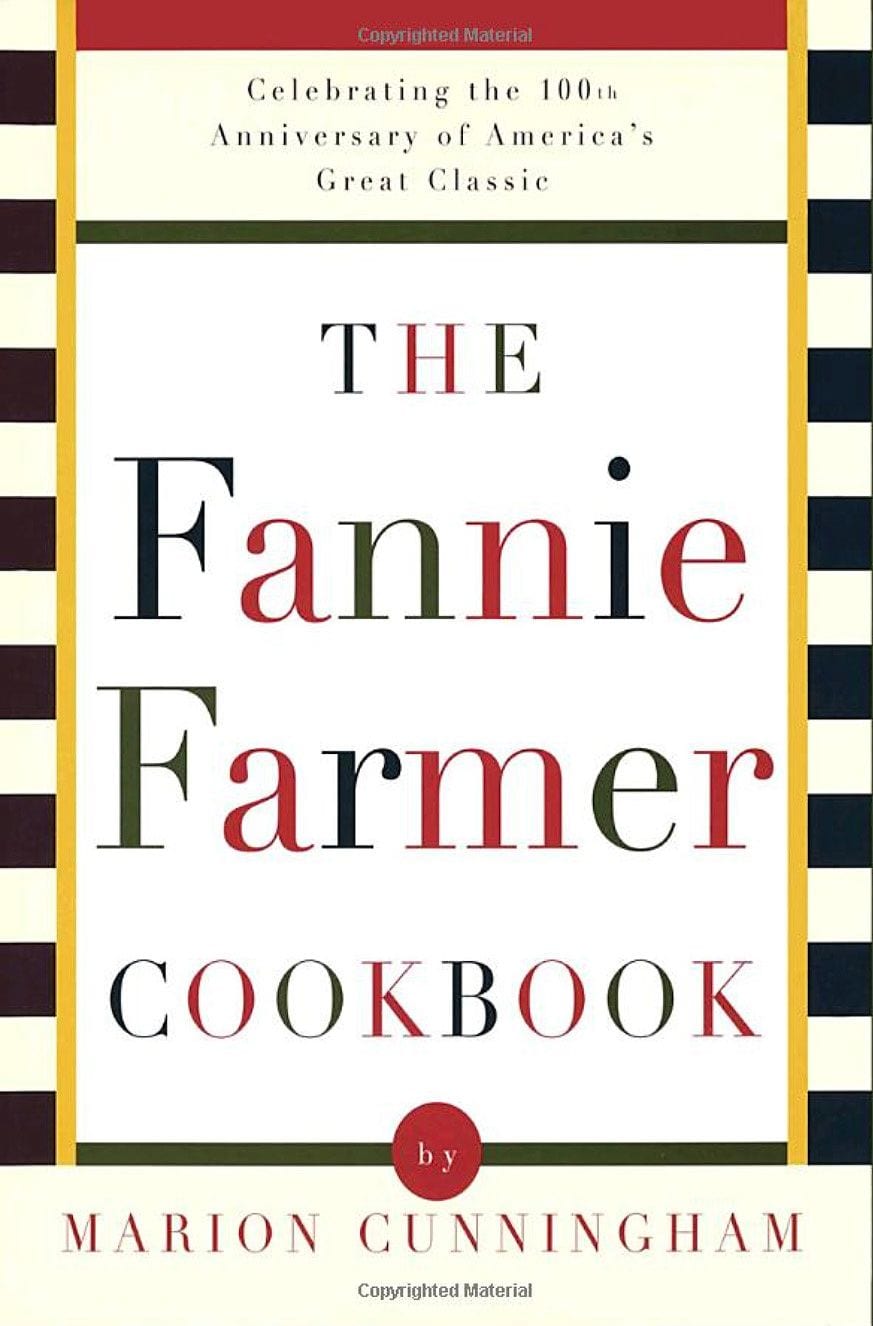 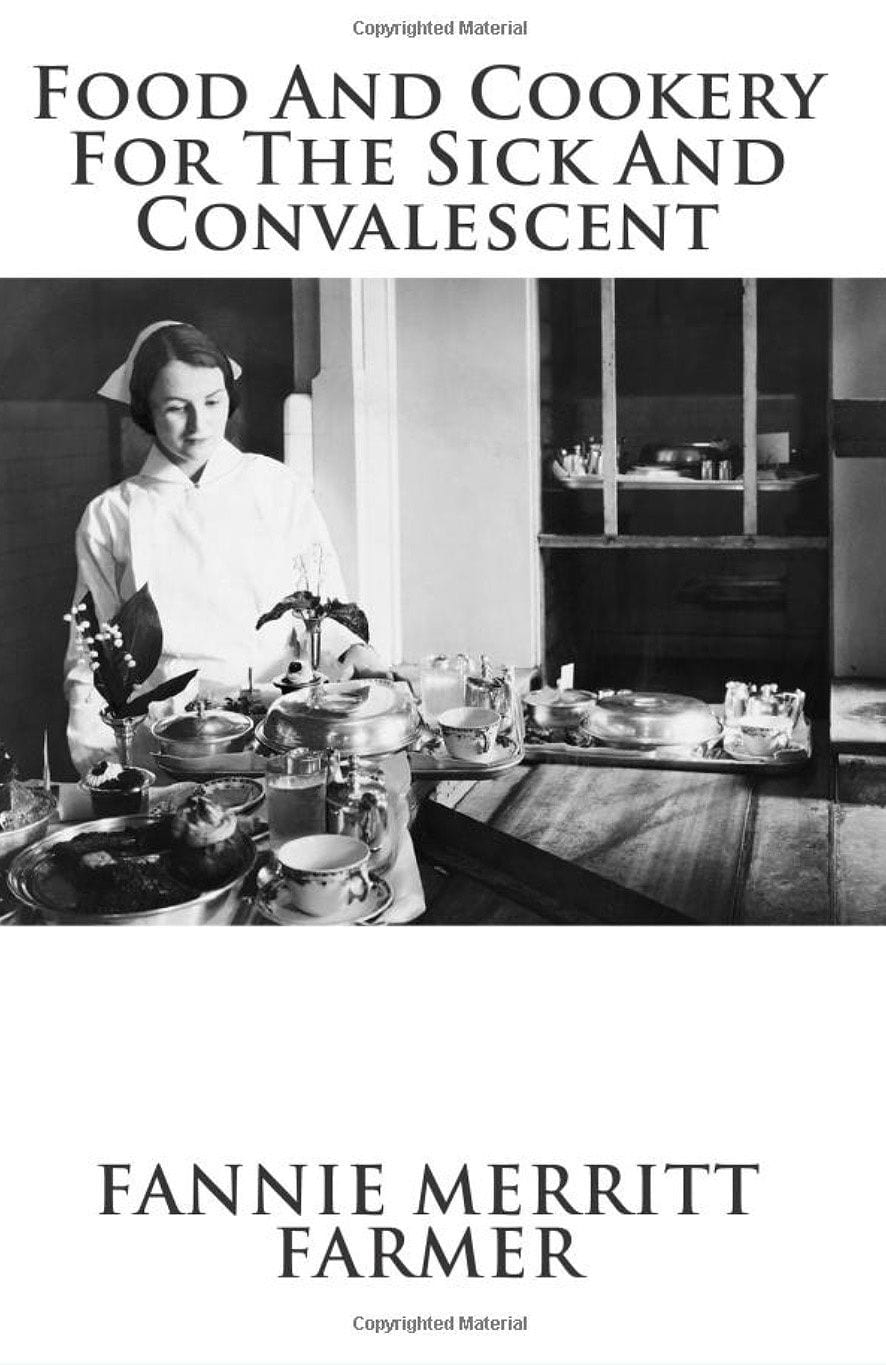 Fannie Farmer (1857-1915) prefaces her best-selling cookbook The Boston Cooking-School Cook Book (1896) not with a recipe or a personal narrative, but with a plea for knowledge, education, and consideration for what we eat and how we cook. “Then,” she writes, “disease will be less frequent.

While modern refrigeration and food regulations keep us relatively safe from foodborne illnesses, up until the mid-20th century, contaminated food and water caused myriad infections, including typhoid fever, tuberculosis, botulism, cholera, scarlet fever, and polio. And just as we see today, immigrants and the poor suffered the most from these viruses.

As immigration and industrialization grew, so did urban cities like Boston. Cheap, cramped housing that lacked basic amenities like indoor plumbing led to diseases spreading easily and widely from person to person through lack of ventilation and poor sanitation.

Farmer was well aware of the dangers. Her narrative indicates a life-long history with infectious diseases. At the age of 16, she contracted the poliovirus, resulting in partial paralysis of her leg, which at times required the use of a wheelchair, as well as caused two strokes later in life.

Farmer’s illness prevented her from finishing high school or attending college, yet led to an interest in cooking and her eventual attendance at Boston Cooking School, where she trained to become an instructor and ultimately, the school’s principal. Undoubtedly, her illness also informed how she viewed disease in general, and the importance she placed on how to care for the sick.

Through the prism of the diseases that shaped her life, we can better understand her work in food.

From her birth in 1857 until the year of her first cookbook’s publication in 1896, Boston alone would have endured epidemic-level outbreaks of influenza, smallpox, typhoid, typhus, scarlet fever, and yellow fever, not including local outbreaks like the one that left her partially paralyzed. In her cookbook, she explains to her reader that, “statistics prove that two-thirds of all disease is brought about by error in diet” (490).

While The Boston Cooking-School Cook Book credits Farmer as its sole author, the book is also shaped in large part by the titular school and its social mission. The Boston Cooking School opened in 1879 as part of the Woman’s Educational Association of Boston. From its inception, the school’s purpose was to provide educational opportunities for women—specifically for working-class women who wanted to earn a living as a cook or domestic worker but who lacked the training. At a time when many women needed employment but lacked professional experience, the cooking school performed an important function.

Tuition was purposefully kept relatively low at $1.50 per six lessons to ensure the school remained accessible for most. Additionally, the school provided free classes in high-immigrant areas of Boston, namely the North End. In addition to basic cooking classes, trained instructors provided courses in anatomy, digestion, and even food chemistry, which was originally taught by Ellen H. Richards. Richards was the first woman to earn a degree from MIT, and the first American woman to earn a degree in chemistry—and whose book, The Dietary Computer (1902), Farmer cites as being “of great value” for families on a tight budget who need to maximize nutritional value (11).

While Farmer didn’t join The Boston Cooking School staff until 1889, a decade into its existence, she was fully on board with the school’s mission of inclusivity. In a 1900 Good Housekeeping article, Farmer boasted that “our pupils come from every walk of life […] They go on to fill all sorts of positions. Our graduates are scattered all over the country, not only in homes of their own, but as teachers in public schools, at the head of kitchens, in hospitals, public institutions, colleges and hotels […] we have hundreds of hired girls who have faithfully followed entire courses realizing that, with added knowledge and growing experience, they can steadily command better wages and more comfortable homes”.

Ever the savvy businesswoman, when Farmer took over as principal of The Boston Cooking School, she led the initiative for the school to publish its own cookbook, offering advertisement space to corporate sponsors to cover production costs. She did so in part to publicize the school’s cooking classes, as well as to promote the novel movement of scientific cookery, which Farmer believed would help alleviate the spread of disease. In her cookbook’s preface, Farmer explains : “It is my wish that it may not only be looked upon as a compilation of tried and tested recipes but that it may awaken an interest through its condensed scientific knowledge which will lead to deeper thought and broader study of what to eat” (preface).

The Boston Cooking-School Cook Book made Farmer a household name for bringing standard measurement and science into cooking. Its straightforward explanations of nutrition and diet were thorough and easily understood, while its introduction of precision baking was revolutionary. Before Farmer, standardized measuring cups and spoons weren’t yet used, so recipes included confusing ingredients and instructions such as “the weight of 9 eggs in sifted flour” (Royal Baking Powder Co.). Aside from gaining better and more accurate results in the kitchen, scientific cooking also promised prevention of disease as well as faster recovery times through a greater understanding of nutrition, food storage and safety, and how illnesses transfer through food and water.

Farmer’s cookbook popularized scientific cooking and did so while addressing a wider audience than its predecessors. American cookbooks up until this time were most often targeted explicitly towards upper- and middle-class housewives. Farmer’s centering of “economical” ingredients and her insistence on “no wasting” appealed to a wider, working-class audience, while also showing concern for their health and well-being. Interspersed among her recipes and instructions, Farmer includes tips on how to cook cheap cuts of meat, how to stretch out meals into leftovers. It even includes the current price of certain fruits, vegetables, and meats, as well as suggestions for less expensive substitutes.

Farmer also recognized the working-class as multi-ethnic, and her cookbook reflects the diverse cultures of immigrants who brought their culinary traditions with them to the United States. While previous well-known American cookbooks still featured almost exclusively British dishes, Farmer’s cookbook more accurately resembles the immigration patterns of late 19th centuryAmerica. In 1896, the year The Boston Cooking School Cook-Book was first published, 35% of Boston residents were immigrants, roughly half of which were Irish. In Farmer’s cookbook, Irish, Chinese, Indian, German, Spanish, Russian, and French influences abound.

Moreover, rather than appropriating these dishes and ingredients, she explicitly gives credit to the cultures’ culinary histories. She explains to her readers that, for example: Ginger is grown in “Jamaica, China, and India”, green tea is found in Japan, and that curry is a dish of Indian descent “which the principal ingredient is turmeric”. Rather than renaming dishes of foreign-descent and erasing their history, she educates her audience on their origins—something contemporary white cookbook authors still struggle with.

Alongside recipes, Farmer offers detailed instructions on how best to store certain foods, at what temperature to scald milk in order to kill bacteria, and what foods are most easily digestible for sick people with weakened immune systems. Moreover, Farmer emphasizes the importance of nutrition for resistance to disease, as well as the inequities in its availability. In the book’s expansive section on tea, she explains how the poor rely on the steeped beverage for its easing of hunger, yet receive little nutritional value to help their immune systems fight disease (65). in the chapter entitled “Child Feeding”, she argues that schools “attended by the poor” should supply food for students, as lunch is “an absolute necessity to the child’s welfare” (33).

While most cookbooks are intended as utilitarian objects, Farmer doesn’t simply instruct readers how to cook, but also incorporates instructions on how to care. She commits entire pages to the presentation of a lunch tray, explaining that for sick and depressed people, “too much attention cannot be given to every detail” (38).

While The Boston Cooking-School Cook Book is the most well-known and widely read of Farmer’s works—with millions of copies sold and editions still in print over a century later, Farmer also authored many other, albeit less successful cookbooks, including her 1904 publication, Food and Cookery for the Sick and Convalescent. While her first cookbook had already sold thousands of copies, Farmer considered this text “her most important work, and upon which she thought her reputation would rest“. Here, Farmer shifted her focus from not just what to eat, but how to use food for nourishment and care.

Farmer spent many years educating women on how to cook at The Boston Cooking School, where she served as principal. However, she spent the final years of her life educating people on how to feed and care for the sick. Her work eventually led to her training dieticians and nurses at Harvard Medical School, where she was the school’s first woman lecturer up until her death in 1915.

Fannie Farmer’s life was surrounded by disease. While she is prominent and revolutionary in educating people on scientific cookery and how to care for the sick, her response to public health crises through the centering of food was not merely clinical. In her final cookbook, published just three years before her death, she tells her readers: “We grow like what we eat; Bad food depresses, good food exalts us like an inspiration” (preface).

Food can be medicine, and it can be poison—but it can also be pleasure, joy, and community. Through the unlikely literary text of a cookbook, Fannie Farmer demonstrated the importance and possibilities of communal nourishment.

Farmer, Fannie M. Food and Cookery for the Sick and Convalescent. Boston: Little, Brown and Co. 1904.

Notaker, Henry. ” A 600-Year History of Cookbooks as Status Symbols“. The Atlantic. October 2017.