A French trilogy of 1960s pop culture, with the accent on “pop”, arrives at last in all its spiffy splendor to English-language-friendly Region 1 Blu-ray after having long been available on disc in France. Such is the Fantômas series, which did great business in France but not in the US back in the day.

It’s beside the point to catalogue much of what happens in these films, for a coherent and logical story isn’t their strong suit. In that regard, these movies are faithful to their sources, so first let us discuss these sources and influences, and let’s do it by working our way backward.

In many respects, ’60s-era popular cinema could be defined by two words: James Bond. The overwhelming popularity of those British-American co-productions promoted a combination of glamour, action, sexiness and sadism, in color and widescreen, previously without much parallel. The France national cinema couldn’t be blamed for being a tad miffed and exclaiming an “oh-la-la” or a “zut alors” in response to Bond, for their home-grown secret agent pulp hero, OSS 117, had been created a few years before Bond and had even been the subject of a film back in 1957.

Meanwhile, director André Hunebelle and actor Jean Marais had been starring in a successful series of swashbucklers. Taking note of the Bond phenomenon, Hunebelle wanted to refashion OSS 117 in the Bondian mode, and in 1963 he launched the first of the ’60s series of OSS 117 films, OSS 117 Is Unleashed (OSS 117 se déchaîne), starring Kerwin Matthews. Kino Lorber has previously released a set of the first five films in this series, four of them directed by Hunebelle, and I’m now heartily ashamed of my neglect of them. Keep watching this space as I rectify my error.

In 1964, Hunebelle and Marais fashioned Fantômas, and once again they looked to their country’s own pop culture for source material. Marcel Allain and Pierre Souvestre had created the diabolical fiend Fantômas, master of disguise and king of crime, back in 1911. Writing alternate chapters without consulting each other, they cranked out many volumes marked by endless action of reversals and escapes and masquerades that, according to their fans, feel barely tied together by any but the flimsiest narrative line.

In the novels, the criminal Fantômas expends a lot of energy foiling Inspector Juve and the reporter Jérôme Fandor, and they’re aided by various lady friends. That’s all anybody needs to know as the stories twist themselves into knots in which the various characters impersonate each other and reveal new identities until they all seem like facets of the same metaphorical personality.

Fantômas would prove pivotal in French cinema, as Louis Feuillade made five Fantômas serials among his pioneering output of the Teens. Famously, the Surrealists loved Fantômas and Feuillade’s films for their combination of straight-faced presentation and dreamlike nonsense. In turn, the popularity of Feuillade’s cliff-hanging serials influenced the trend for action-adventure serials in Germany, and this impulse would flower into Fritz Lang’s Dr. Mabuse films, which are also about a criminal mastermind who controls everything and changes his identity at will. 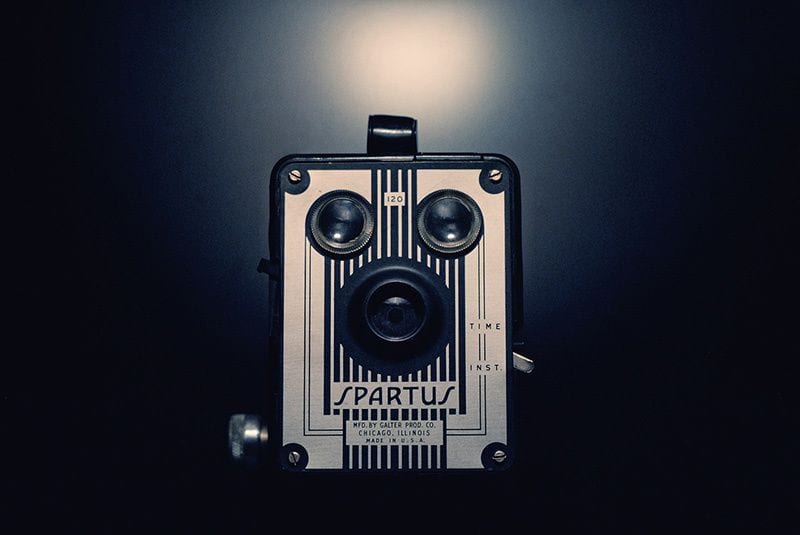 Fast forward to the James Bond of the ’60s and we discover that Lang, no fool he, recognized in Ian Fleming’s Bond novels that the time had come again for Mabuse. His The Thousand Eyes of Dr. Mabuse (1960) came out a full two years before the first Bond film, Terence Young’s Dr. No (1962), and launched a series of German Mabuse movies that continued through the decade. Gert Frobe, one of the stars in Lang’s 1960 film, would later play Goldfinger (1964), so the Germans, too, have some claim to say they got there before Bond.

By the way, that pivotal and dizzying cinematic year of 1964 is also the year Philippe De Broca had a worldwide hit with That Man from Rio ,starring Jean-Paul Belmondo, a near-perfect blend of frantic action and comedy in an expensive-looking package that influenced the young Steven Spielberg, who cited it as a direct inspiration for Raiders of the Lost Ark. Its light-hearted tone, inspired by Hergé’s Tintin comics, is mirrored in the Fantômas trilogy, which must be understood first and foremost as a comic put-on.

At last we arrive at Fantômas (1964), first entry in the ’60s trilogy, although there had been a few other Fantômas films scattered over French cinema since the Teens. Oh wait — not so fast, for one other factoid is pertinent here.

In between the swashbucklers and Fantômas, Hunebelle and Marais made The Mysteries of Paris (1962), based on the novel of the same name by France’s king of 19th Century pulp serials, Eugène Sue. This smash novel had been a landmark in French pop fiction that spawned many imitations and functions as a genuine forerunner to the Fantômas epic. This property, too, never died in French culture and inspired, for example, Jacques Rivette’s use of mysterioso and paranoid suspense techniques in Paris Belongs to Us (1960), with its intimations of some kind of behind-the-scenes plot.

And, as historian and self-described “Fantômas fanatic” Tim Lucas mentions in his commentary on the Fantômas Blu-ray, Georges Franju had wanted to remake Feuillade’s Fantômas but, thanks to Hunebelle’s dibs, had to content himself with a remake of another Feuillade serial, Judex (1963). Are we up to speed now? Probably, but we reserve the right to inject something else if it occurs to us.

For better or worse, Hunebelle’s series presents a villain who has now lost his diacritical mark (a victim of circonflex?), but he’s gained much more. For one thing, he wears a bald blue mask that makes him look like a robot as he enters his groovy underground headquarters through sliding panels and elevators. These criminal masterminds know how to spend their ill-gotten loot.

He’s surrounded by computers and TV screens and we don’t know what all, and behind him is a huge Phantom of the Opera-like organ that provides the dramatic background score, courtesy of composer Michel Magne, who also offers Bondish themes and bouncy drollery. It’s a pad to envy, with shout-outs deserved by production designer Paul-Louis Boutié and set decorator Robert Turlure. 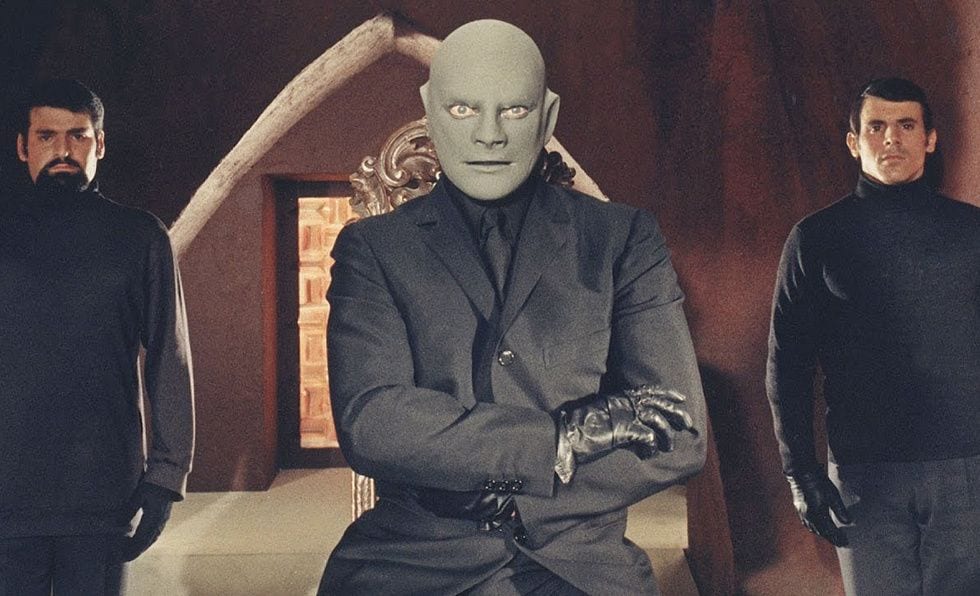 Another quality to envy is being played by Marais, who was well into his mid-career persona as an action hero and matinee idol after having been made a star and muse by Jean Cocteau. They were lovers, and Cocteau’s death in 1963 can be seen as dividing Marais and Hunebelle’s swashbuckler phase from the Fantômas phase.

In fact, Marais has a dual role. Since the villain spends some of his time masquerading as the reporter Fandor, Marais simply plays both roles, literally chasing his own tail as hero to his own villain. In the endless mirror images of identity that mark Fantômas tales, this casting stroke is both thematic and economical. Notice the similarity of the names Fantômas and Fandor; in the novels, it was revealed that Fandor was the son of Fantômas, so perhaps even Darth “I am your father, Luke” Vader wasn’t unaffected by the Fantômas legacy.

It would probably be a bit of a reach to link Marais’ duality with his sexuality. Both personas are attended by girlfriends. Fandor is aided by the plucky Hélène (Mylène Demongeot), a child of the go-go era, while Fantomas has the exotic upper-class Lady Beltham (Marie-Hélène Arnaud). In the first film, one curious plot development involves the bad guy’s wish, while disguised as Fandor, to dally with Hélène, who’s high on his “elixir of happiness”. Since she has amnesia, we never know if he carried out this plan before a jealous Lady Beltham stepped in to cut the kidnapees loose.

Inspector Juve is recast as a comic role played by popular comedian Louis de Funès, whose manic mugging doesn’t feel out of place because the whole thing adopts a larkish, winking, “camp” tone, much more than the Bond films but less than the Batman TV series, which launched in 1966. The Fantomas series forecasts some of its facetiousness, and it also forecasts an element in another American TV series that debuted in 1966, Mission: Impossible. For here we have the first examples of those supernaturally perfect rubber masks, and even rubber masks under rubber masks, that peel off one actor’s face to unveil another. Impossible, indeed.

Although Marais, amazingly, performs most of his own physical stunt work, another person who deserves a shout-out as the film’s secret star is legendary stuntman (in French, “cascadeur“) and driver Gil Delamare, who gets a special effects credit. His special effect is to pull off the climactic car stunt down a winding hill, supposedly without breaks, and later moments of dangling from helicopters and such antics. He dangled similarly in That Man from Rio and would do lots more until his accidental death in 1966.

Delamare’s mantel was inherited by Rémy Julienne, who worked with Delamare on Fantômas and would go on, for example, to perform the similar and more astonishing stunt driving in Cold Sweat (1970), directed by none other than James Bond’s Terence Young and also scored by Michel Magne. These projects are all related by secret, labyrinthine, diabolical blueprints of unfathomable complication. 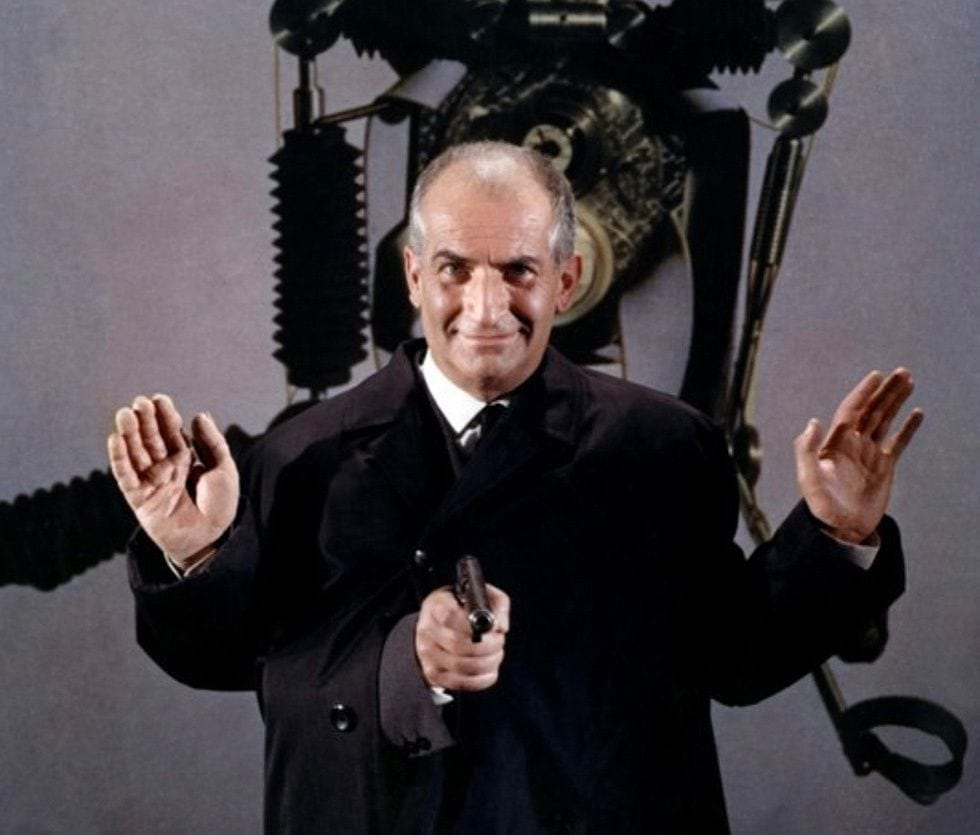 The second film, 1965’s Fantômas se déchaîne or Fantômas Unleashed, is even more of a knockabout farce that openly parodies the Bond movies. This time, Marais adds a third role to his repertoire, that of an elderly professor who’s working on a telepathic ray. Both Fandor and Fantômas pretend to be the professor, leading to riotous confusion compounded by Juve’s hilarious gadget that gives him a third hand.

Fantômas now has an underwater base in a volcano, anticipating Lewis Gilbert’s You Only Live Twice (1967) by a couple of years. Can it be that these French films in turn had an impact on the Bond series that inspired them? As designed by Max Douy, the volcano pad is incredibly swanky and includes automotive mini-bar, organ mood music, and trapdoors with armed minions. Douy’s career stretched from Jean Renoir’s The Rules of the Game (1939) to an actual Bond movie, Gilbert’s Moonraker (1979).

Although process photography is obviously used for the main actors in the final two-men-one-parachute stunt, a credit states that the authentic distant shots were the first time the stunt was filmed for a movie. Unfortunately, this is Delamare’s last Fantômas film before his death.

The conclusion, Fantômas vs. Scotland Yard (1967), transplants the action to a castle near Loch Ness, so there’s even a literal Scotland yard. This is the most slapstick entry, and Juve is made to look even more manic and foolish thanks to ghostly shenanigans and disappearing corpses. By this point, we must wonder if Juve has been influenced by Peter Sellers’ turn as Inspector Clouseau, for he’s become an almost completely useless dupe of Fantômas. It’s no spoiler to reveal that any hopes of the Loch Ness Monster factoring into the plot comes to nothing; instead, there’s a rocket.

It’s smart of Kino Lorber to offer all three films in one two-disc package. Now that this Fantômas trilogy has arrived, we can hope more Hunebelle/Marais films follow as well as more non-Hunebelle Fantômas films, like the four 1980 TV movies from Claude Chabrol and Juan Luis Buñuel. These are all examples of the mainstream commercial cinema that France never stopped making, even while the world was rightly stunned by the low-budget personal upstarts of the Nouvelle Vague. In world cinema terms, the New Wave “won” among critics and historians, but that’s no reason to avoid examining how French pop culture expressed itself. These movies are a good start.