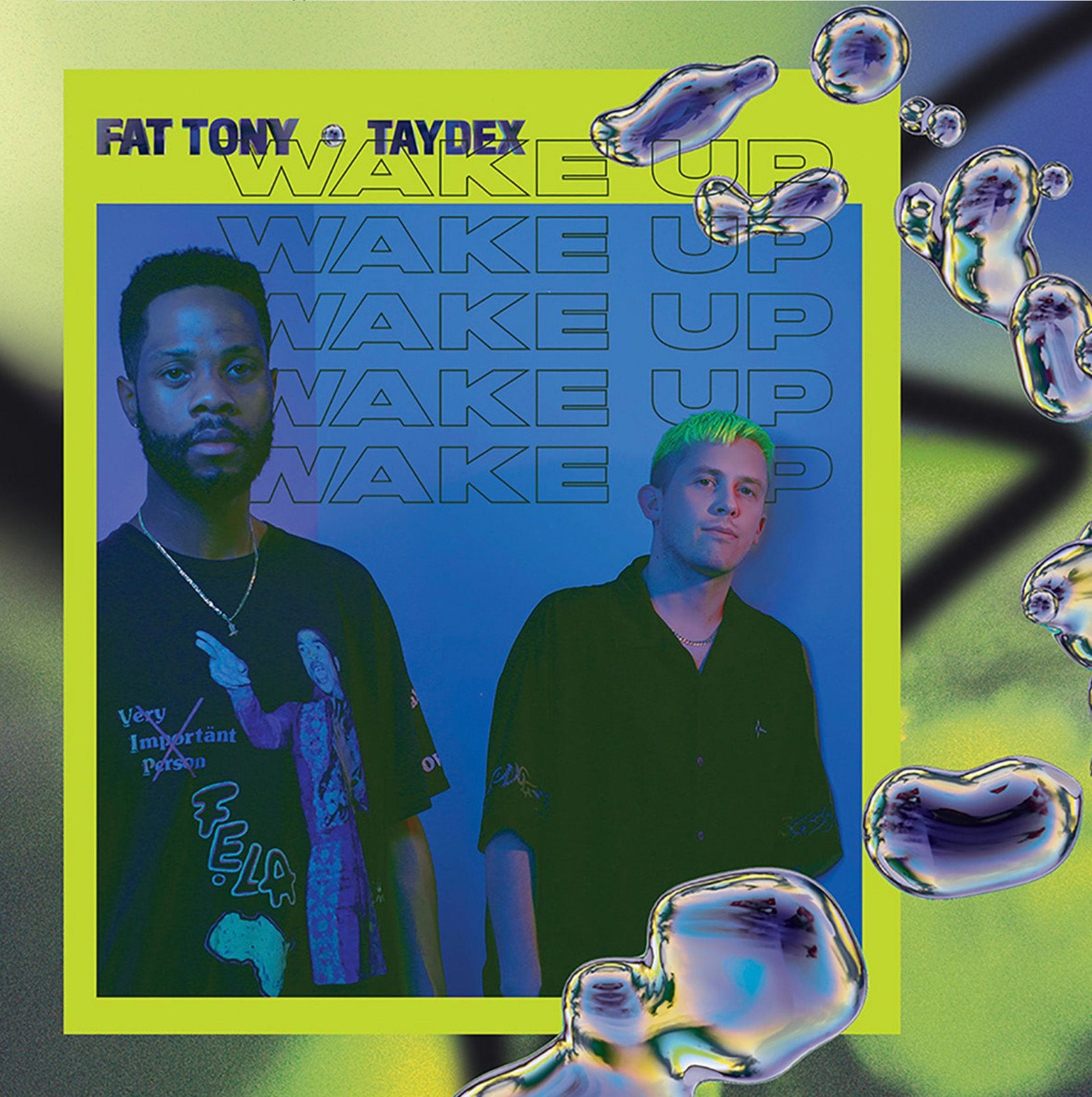 Creeping in around the margins of hip-hop’s mainstream, though firmly situated on its flood banks, Fat Tony has made a curiosity of himself amongst the hip-hop culturati. Armed with a caché of influences that include electronica, post-punk and new wave pop, the rapper has forged a peculiar brand of machine-driven music; one that pulls from the ever-expanding canons of popular music as it does the beat poetry of Bob Kaufman and Philip Lamantia. His off-handed approach in marshaling all his disparate influences into one articulate package has him aligned with the likes of artists such as Ishmael Butler and Neneh Cherry than it does Vince Staples or Vic Mensa.

With seven studio albums under his belt Fat Tony (born Anthony Obiawunaotu) continues to explore the far reaches of hip-hop and his latest, 2020’s Wake Up (listed as a joint effort with producer Taydex), plumbs further the depths of his absurdist humour and a wealth of new wave pop. The Houston native’s seventh effort has taken its cues from his head-scratching, though pleasing, sixth release 10,000 Hours (2018), an album that revved up the electro influences and dispensed churlishly with lucid rhymes.

Fat Tony brings Wake Up to a booming cusp where the beats throb with strobe-light intensity. Still using ’80s new wave pop as a touchstone (a mainstay influence), Tony and Taydex round out the album with the pop-laced gothica that is the preserve of the Cure and Siouxsie and the Banshees. On offer are numbers like “Cut That”, which appropriates a synth-as-guitar-as-harpsichord riff into the moody, pulsating shuffle.

There also is the skewed atmospherics of the eerie “Get Out My Way”, the minimalist electro of “Magnifique”, and the breathless drone of the booming “Godly” to always vary the course. In just a tight and compact 20-minutes, Fat Tony hones his erratic sounds into a shapely and handsome package, and Wake Up goes down as another work from a bright, young artist making waves amongst the new generation of hip-hop upstarts.

The rapper talks with PopMatters about his life growing up in Houston, his various musical influences, and his latest effort.

Tell me about your life growing up in Third Ward, Houston.

Third Ward, Houston is the best neighborhood in the world. Growing up in Third Ward is a blessing. It’s a neighborhood with a rich history and plenty of artistic heroes from Big Moe to Beyoncé to John Biggers. I grew up with my mother, my mom’s mom, my father, and younger brother near Texas Southern University and University of Houston. I was around many of the important cultural institutions in Houston like the Contemporary Arts Museum, the original Screwed Up Records and Tapes, the Menil Museum, and record stores like Soundwaves on South Main and the one in Montrose.

I feel lucky I got to explore those places when making music was just starting to become my obsession. If I still lived in Houston, Third Ward is the only place I’d want to be. I encourage any Houstonian and non-Houstonian to visit it and its surrounding neighborhoods for a look at Houston culture from artists to cowboys to preachers to intellectuals.

Your influences range between hip-hop and punk-rock. You listened to Nas as well as Bikini Kill. What was your immersion in music like during your teenage years?

I was young and curious during the height of P2P clients like Napster, Soulseek, Limewire, etc. Any musician from any era was accessible to me. Even if I couldn’t download a full album, I could at least find a song or a snippet on online CD stores like CD Baby. This allowed me to look up any artist I had even heard of in passing.

I read through any music magazine I could get my hands on, current issues, and back issues. I read Spin, The Source, Vibe, Ego Trip, Frank 151, XXL, Maximumrocknroll, Wire, Murder Dog, O-Zone, and Wax Poetics whenever I could. I was always online and found more music through blogspots, message boards, LiveJournal groups, and more.

My curiosity was through the roof, so I was able to ingest punk, rap, and pop music of all eras, styles, and regions, as long as I was patient enough to search. I never had a moment in my life when it felt uncomfortable within myself to explore any genre as a fan. Luckily, that became the norm during my generation so it rarely felt isolating, either. And when it did, it was so superficial that it never deterred me.

You had a foot in punk culture growing up, working mostly in promotion for other punk bands. Did you ever play in punk bands, learn to play the guitar?

Of course. It’s hard to get into punk without becoming a musician. I bought a bass guitar from my friend’s sister with my first summer check when I was 14. She played in the church. I played with a band we called Donatello but it never got serious.

I was making rap around the same time and most of my musical interest was in that. I loved punk music as a fan. That’s what led me to organize shows. I started putting on concerts in high school when I booked the Ergs after they posted a “TBD” for their Houston show online. I booked shows at a performance art venue called Super Happy Fun Land because they were the only ones who returned my teenage-ass inquiries.

I continued to play bass with friends in my 20s but always as a hobby. The friends I played with were in other bands that did it professionally. This was our little fun outlet. Dorian Electra sang in my last punk band. They were great songwriters from the start. We recorded four or five songs for a split 7″ record but never released it.

Listening to your albums, you could say your music is rooted in hip-hop but utilizes many elements from electronic music; you sing and you rap. Tell us about your beginnings in hip-hop, particularly learning hip-hop production.

That night I got on Soundclick and recorded some random producers’ beats to a cassette tape by holding the recorder up to our computer speakers. That tape was the first time we ever tried to write songs together. I abandoned trying to produce almost instantly and focused on being a rapper.

RABDARGAB (2010) and Smart Ass Black Boy (2013) are studio albums in which you primarily rap. And then by 10,000 Hours, you begin to explore a bit more with your vocals, singing a good part of the time. The influences also begin to shift on 10 000 Hours, with more R&B, electronica, and even traces of early house. Tell me about the musical transitions that took place on the 10,000 Hours album.

Me and the producer Heaven the Dude just wanted to go wild with that album. We lived together in Lincoln Heights, Los Angeles when we made it. For months, every week we’d spend a few nights making songs in his room. We’d make whatever felt right in the moment. Especially if it was something silly like “Nike”.

He’s a virtuoso, for real. He’s extremely sick on bass and guitar. He’s played it all, from gospel to punk to noise.

My favorite song on that album is “Texas”. I think that’s the song that best represents me and Heaven the Dude’s intentions on that record. It’s fun and honest about my perspective in this life. He’s from Houston too and a freak like me. We listen to any and everything. I grew up with his little sister and we were in one of my just-for-fun-let’s-jam-and-kick-it punk bands.

10,000 Hours features a song about your brother, discussing his life with autism. You grew up with your brother, learning to interact and communicate with him in a very different way. Did that have an impact on you as you moved out into the larger world?

It made me want to meet more people with a similar home life. I always wanted to meet people with families that resembled mine to any degree, and when I finally did in my 20s, it felt wonderful. Just to be able to relate.

I wrote “Charles” originally for Charge It To The Game [Tony’s side-project band with producer Kyle Mabson] on the Urban Hall of Fame EP. I wanted to have fun and honor my brother with the song.

10,000 Hours was an effort to be a bit more autobiographical in an album, so it felt right to recreate “Charles” for the record. The original Charge It To The Game version is my favorite.

Your latest album, Wake Up, continues to experiment; the rapping element is much more prominent here. The album is split between bass-heavy beats and minimal structures. You also worked with Taydex on this album. Tell us about the themes, styles, and elements you explore here.

Yeah, and it’s gonna stay that way. I love to do anything that feels right with my voice but rap is my number one.

Wake Up is all about urgency. A call to break free from bringing your damn self down and a boost to keep you going. The album was inspired by this meme I saw of Bishop T.D. Jakes screaming “WAKE UP!” over and over to his congregation, sweat exploding off his forehead and body convulsing from head to toe. As I kept rewinding it, the intent of his message struck me. I wanted the entire album to contain the same energy. We even sampled it on the title track “Wake Up”.

Taydex and I wrote and recorded the album in Los Angeles from the fall of 2018 to the summer of 2019. We picked our favorite nine tracks out of everything we recorded. He produced “Swervin” on MacGregor Park and co-produced “Poet Laureate” from 10,000 Hours. Great guy. Big Deftones fan and a beast on drums. He even has a White Pony tattoo!

I feel like this album is a great display of Taydex’s range as a producer. Nearly every track is a different mood. It was dope to have a few musicians on this album too. Sophia Pfister is featured throughout the album. Emily Rosenfield plays guitar and Derek Howa plays keys throughout the album. Taydex played the main guitar riff on “Big Ego” too.

Your music videos tend toward theatrics; I’m surprised you haven’t crossed over into other mediums like theatre or cinema acting. What are your ideas about exploring those mediums?

I’m all for it. I’m open to whatever feels fun and up my alley. Shit, I want to do some voice acting too.

I’m in the short film More Than a Feeling and hosted and produced Thrift Haul with Fat Tony on Super Deluxe. As long as I’m here, you can always expect something next.

I want to continue developing narrative-writing in my work too. I have a new album called Exotica coming out this October. It’s an album full of characters and situations, recorded in Jamaica with my longtime producer GLDNEYE (fka Tom Cruz). Music is my core and I’m thankful it’s given me opportunities to try anything creative that my imagination desires.