Perhaps no creator of Chinese martial arts period films was more important than King Hu, an original, classically oriented artist who coined conventions as easily as he broke them. Until a few years ago, most of his output had been neglected and impossible to see. When Criterion released his three-hour 1971 epic, A Touch of Zen back in 2016, we wrote, “A one-hour documentary on Hu’s career makes us hope we’ll be able to see restorations of Dragon Gate Inn, The Fate of Lee Khan, The Valiant Ones, Raining in the Mountain, Legend of the Mountain and others that have proven elusive.”

Ask and we shall receive. Last year, Criterion graced us with Dragon Inn (1967) while Kino Lorber ushered in Legend of the Mountain, a three-hour spectacle from 1979. Now, spreading the wealth around, Film Movement claims the honor of releasing the 2K digital restoration of The Fate of Lee Khan (1973), made for the Hong Kong company, Golden Harvest.

The film represents a retrenchment for Hu after the commercial disaster of his unusual, mystical A Touch of Zen. He hammered out a two-picture distribution deal with Golden Harvest to prove he could still provide commercial efforts in the vein of his Hong Kong Shaw Brothers hit, Come Drink with Me (1966) and his subsequent Taiwan-produced phenomenon, Dragon Inn. Founded by defectors from Shaw Brothers, Golden Harvest was indeed the new golden boy on the martial arts block, thanks largely to its own phenomenon, Bruce Lee.

Under the terms of the deal, Hu would retain ownership of one of the films and Golden Harvest would own the other. The Fate of Lee Khan (Ying chun ge zhi Fengbo) is the Golden Harvest property, while it took the notoriously perfectionist Hu two more years to finish The Valiant Ones, a similar action piece that began shooting back to back with the other.

The Fate of Lee Khan is déjà vu all over again as, like Dragon Inn, the story centers on an inn, with many fights staged in its massive dining room amid wooden tables and balconies. Hu also continues to develop his penchant for butt-kicking warrior women, such that the fighting women effectively outnumber the men and are certainly more interesting. 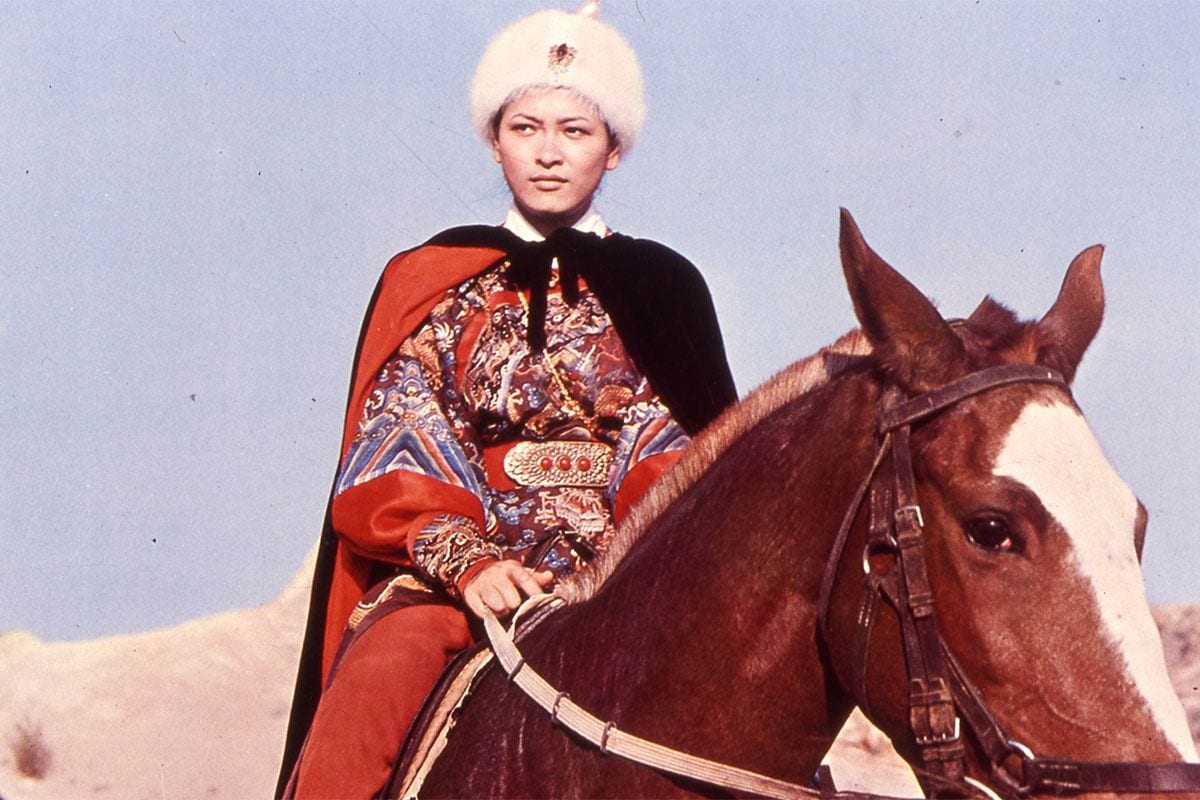 Spring Inn is owned by the heroine, Wan Jen-mi (former Shaw Brothers star Li Li-hua). Less a hole in the wall than a cave in the hill, the inn seems from the outside to have been designed by hobbits. Surrounded by little besides dust storms and hills, this cave turns out to be disproportionately massive inside, like Doctor Who’s TARDIS. There’s also plenty of light somehow.

On its first day of business — nay, its first hour — Spring Inn already attracts a pack of suspicious characters from a handsy womanizer to cheating gamblers to a trio of sword-wielding robbers. There’s also the inevitable self-possessed polite traveler and an annoying itinerant musician, both of whom turn out to be rebel agents having a rendezvous with Wan. When not fighting, everyone’s constantly glancing and nodding significantly at each other.

With all this dicey activity, it’s a good thing Wan employs four uppity waitresses with shady criminal pasts. Nobody else would give them a break. All four quickly reveal their real talents for working in such a joint when they handily somersault, kick, and backflip their way through the would-be robbers, bare-handedly disarming them of their scimitars. Then everybody puts the furniture back in order and goes back to their food. It’s just another day.

These proletarian upstarts demonstrate the kind of hand-to-hand combat then rising in the kung fu genre, although later they’ll prove proficient in all kinds of weapons. One of the servers is played by Angela Mao, a.k.a. “Lady Whirlwind”, already establishing herself as one of the decade’s top martial arts women stars. This is the same year she played Bruce Lee’s sister in Robert Clouse’s Golden Harvest co-production Enter the Dragon, and she’s probably best remembered for that among those who don’t really follow the genre.

The larger plot has something to do with rebellion against a cruel regime, a favorite trope for the Beijing-born Hu. In this case, it’s a nationalistic uprising against the Mongol Yuan Dynasty instituted by Kublai Khan, and this rebellion would usher in the Ming Dynasty. 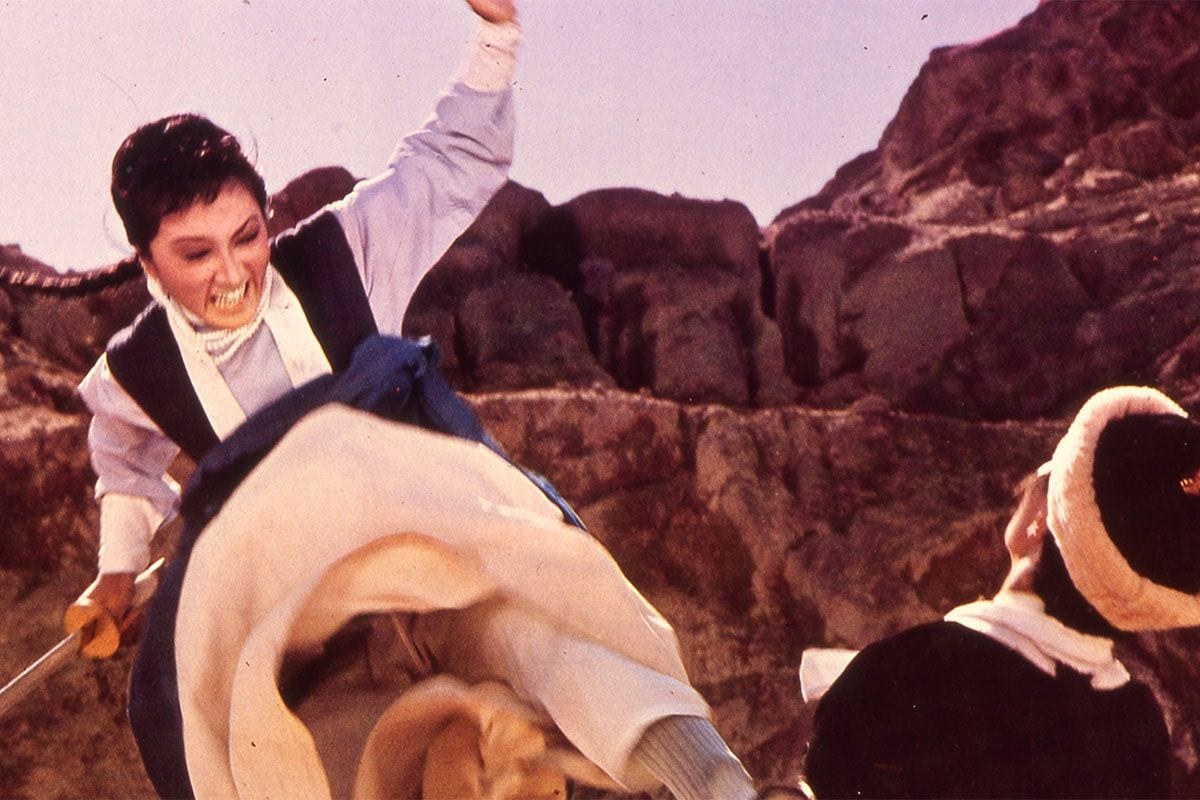 The cruelty of tyranny is embodied by the title minister, the grimacing Lee Khan (Tien Feng) and his even more dangerous and clever sister, Princess Lee Wan-erh. She’s played by Hsu Feng, who’d been in Hu’s films from a very small role in Dragon Inn to a lead in A Touch of Zen and would continue to play dazzling swordswomen. She’s taken the lead in restoring his films, which constitute a major part of her own legacy as well.

Lee Khan and his sister are the only characters in the film who have no secret motives or identities but who are exactly as they appear, whether discussing executions or listening with rapture to a real period ballad in a musical interlude. Virtually every other role is a masquerade of identities or loyalties, sometimes determined arbitrarily by whether one passes the secret talisman of coins with holes in them. The only truth is expressed physically, for characters become themselves only when fighting. Truly, we shall know them by their actions.

Whether a character is initially annoying or ingratiating has nothing to do with whether they’re “good” or “bad” (rebel or loyal) in this scheme. This point is proven vividly when Khan’s trusted general (Roy Chiao), apparently as cruel and zealous as he, turns out to be a rebel traitor and therefore instantly re-aligns with the movie’s “good guys”. This general will found the Ming Dynasty. Is Hu implying a case of “new boss, same as the old boss”?

As we’ve indicated, this is a more straightforward and modestly conceived movie than some of Hu’s other late-period films, and one consciously echoing previous hits. In the first half, Hu stages and cuts carefully because he wants the viewer to understand the action clearly. He chooses when to place his camera in the middle of the action and when to present a theatrical tableau, sometimes linking the approaches with a well-timed zoom. He’s impressed by the broad strokes of dynamic spectacle and presents them as though unrolling a scroll, albeit linked by rapid editing.

Meanwhile, he’s equally at home in the art of abstract editing and staging, when the cuts don’t link images coherently but present a kinetic abstraction of leaping bodies. At one point in the nonstop free-for-all that functions as the film’s final act, we get a flurry of comin-at-ya sword thrusts as the camera flashes between subjective POV shots of two characters at each other’s throats, as if it’s a 3D movie. 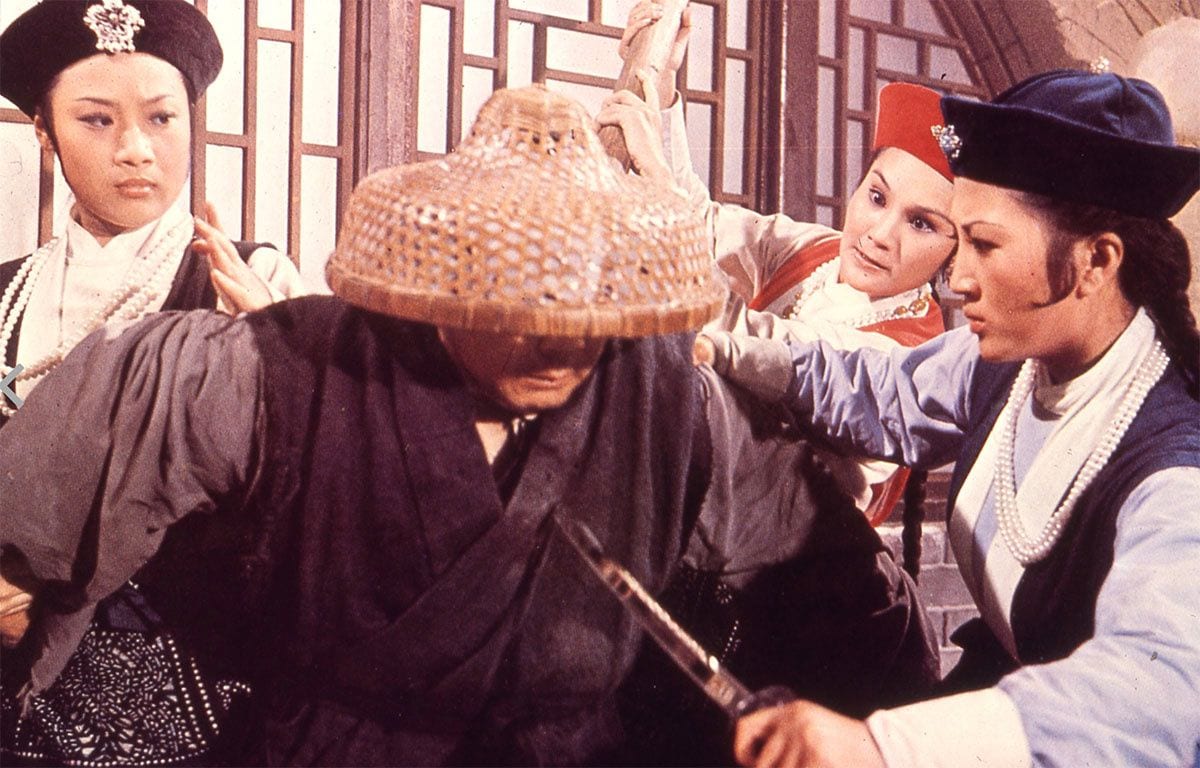 The last half of the melee cuts to outdoors, to the dusty multi-level plains, and alternates between panoramic shots and frantic close-ups that obscure as much action as they reveal. Fortunately, everyone’s in color-coded robes. Hu functioned as his own costume and set designer, the better to command what Stephen Teo’s liner notes call Hu’s “cinema opera”. Hu’s fight choreographer, Sammo Hung, was on his way to his own great career as a star-choreographer.

In a bonus discussion with Samuel Jamier and David Wilentz of the New York Asian Film Festival, they refer to an interview in which Hu stated that he wasn’t happy with the rampant finalé because he felt rushed for commercial reasons and thought it didn’t quite fit his vision. Perhaps so, though it’s certainly a cathartic explosion of everyone killing each other with a dizzying variety of weapons and techniques.

It’s true, however, that in the general disposal of many of the characters we’ve spent two hours with, there’s no special emotional pay-off nor any pause to reflect on loss. What we’re left with, amid all the exhilaration, is a general sense of waste, as though the victory is basically Pyrrhic. This can be the only explanation for why the survivors gratuitously set fire to their own inn before riding away. It’s not only that it’s served its purpose but that we must be left with a visual symbol of all-consuming devastation that doesn’t exactly promise a brighter tomorrow.

Alas, in the year when Bruce Lee’s contemporary-set, ragingly violent spectacles were defining the new standard in martial arts, this more classically oriented, more elegant, more simmering period film wasn’t completely in step with the market that Hu had been so instrumental in creating. He’d never again have a hit on the level of his 1960s films.

Never mind. If King Hu is no longer around, the legacy of his films remain, and we continue to be glad that they’re no longer neglected. Here’s hoping the remainder are on their way.