Perhaps nobody is too surprised that Downhill, an American adaptation of Ruben Östlund’s 2014 film, Force Majeure, is a disappointment. But damn it if all the pieces aren’t there.

Nat Faxon and Jim Rash (with co-writer Jesse Armstrong of HBO’s excellent
Succession) have successful careers in comedy, and their stars here, Julia Louis-Dreyfus and Will Ferrell, are undoubtedly two of the biggest comedy juggernauts of their generation. So why isn’t their film funny?

The truth is that
Downhill isn’t just not funny, it’s not effective in any way. Force Majeure was clever in its use of comedy for dramatic ends and vice versa. The heroics of family-man masculinity, rendered by the handsome Swede Johannes Bah Kuhnke, dissolve slowly throughout in fits of cowardice and hysterical sobbing.

In
Downhill, getting dark means getting harsh. But the Stauntons are stereotypically American, stubborn and vulgar; unsubtle. Without nuance, the whole film sinks.

Billie and Pete Staunton (Louis-Dreyfus and Ferrell) are on vacation with their two sons (Julian Grey and Ammon Jacob) in the Alps, but things are looking strange. “Why are there no kids?” Billie asks. (The film doesn’t know, either.) The family is checked in by Charlotte (Miranda Otto), a vaguely Germanic woman with no boundaries or filter.

Billie is annoyed with Pete because he’s on his phone texting with his coworker Zach (Zach Woods), who’s on vacation nearby with his girlfriend Rosie (Zoë Chao). Zach and Rosie are what you might call a social media couple, constantly documenting their trip on Instagram with an assortment of inane hashtags, which is a recurring joke that feels straight out of 2014.

The characters are set even before they begin speaking; Billie is anxious and caustic (typical Louis-Dreyfus), and Pete is boyish and passive (typical Ferrell). Their sons are tweenaged – temperamental but generally sweet. They get some skiing in, and cinematographer Danny Cohen gets in some shots of the snowy mountains.

One day, while sitting at an outdoor restaurant and arguing about soup, a small avalanche tumbles down and covers everyone with a dusting of snow. Nobody is hurt, but the family is shaken. Everyone, that is, except for Pete, who took his phone and ran away, leaving his family behind.

This conceit is exactly the same as the one in Force Majeure, of course. A small scare – the avalanche that could have been deadly but wasn’t – enacts psychological ripples that almost tear a seemingly happy family apart. What’s missing, in this broad, American mode, is the subtleties that distinguish traditional comedy from effective satire. 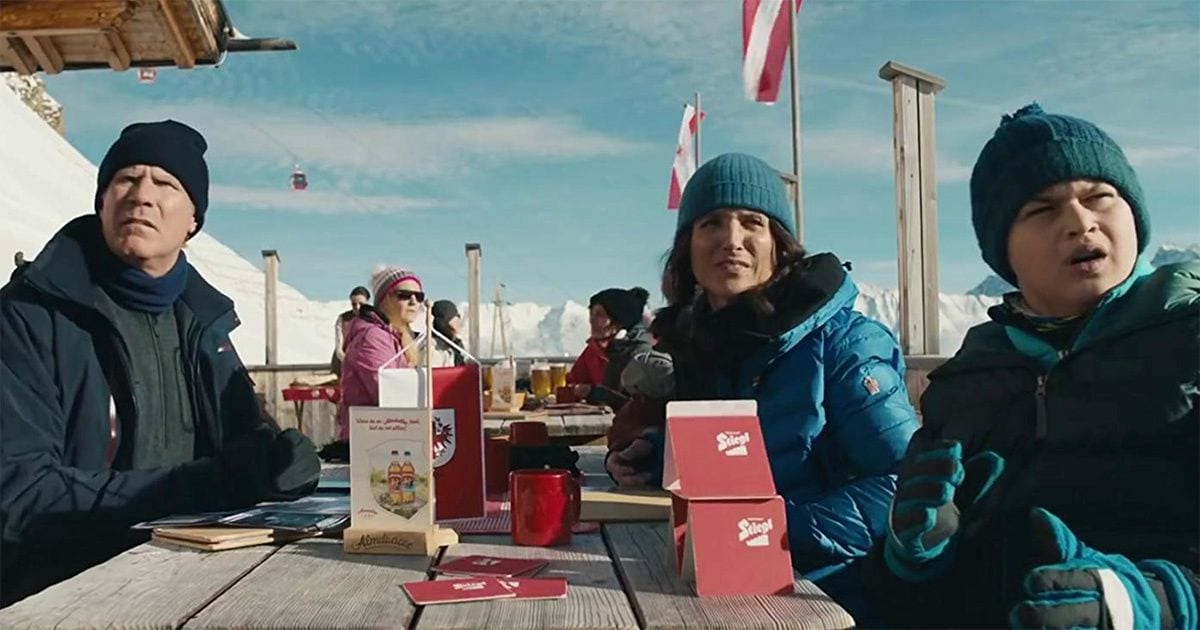 In American comedies, shrill wives nag their doofy husbands. Spoiled kids pay closer attention to screens than they do their parents’ faces. Someone has a brief affair with a hot foreigner way out of their league, and just when everything is about to fall apart, the family comes together again in the end, victorious.

To be fair, these tropes are not American trademarks. My point here is that Faxon and Rash have adapted a foreign property without considering the pitfalls of translation, the most important of those being that the original meaning often gets lost. It’s difficult to pinpoint exactly why we should care about the Stauntons, or why we should take sides between Billie and Pete in the first place. Neither of them have real backstories, nor do they betray any specific beliefs. Billie is probably fun to talk shit about people with, and Pete is probably a pretty nice guy when it comes down to it. So what?

Louis-Dreyfus, it can be said, is excellent even with hackneyed material. Her dry asides are often hilarious, derivative as they are from Seinfeld‘s Elaine Benes and Veep‘s Selina Meyer. Ferrell, on the other hand, is less convincing, never being given a chance to go all out with the mania he’s known for. Instead, he’s ineffectual and sniveling, and he’s not particularly memorable.

Nevertheless, an equal piece of the blame falls at the feet of the crew. The biggest letdown in Downhill is its failure to establish a consistent tone. Billie’s annoyance at the minutiae of traveling is relatable, especially considering how broadly the European characters they come into contact with are drawn. Aside from Charlotte, there are the owners, two severe men whose only purpose is to push Billie’s buttons and satisfy the German stereotype of no-nonsense intensity. (Are they German? Austrian? Swiss? It’s not entirely clear.)

Combine these scenes, played as cringe comedy, with a few melodramatic scenes that come later and you’ve got two different movies. Admittedly, one of the film’s best scenes is a dramatic one: While entertaining Zach and Rosie back in their room, Billie confronts Pete about his abandonment during the avalanche. The scene allows Louis-Dreyfus to dig into her character for once, and the result is an odd moment of poignance. Still, though, Pete’s emasculated gaslighting isn’t enough for Ferrell to work with, and Woods and Chao’s only purpose in the scene is to cringe and go, “Um, that was awkward.”

Near the end of the story, after a few days of stilted communication, Billie takes to the mountain herself while her family waits at the bottom. The kids are ostensibly still upset with their father, but there’s little in the script that gives them a chance to vocalize their feelings. Suddenly, a voice calls out from above: “Pete!” It’s Billie, calling on her husband to save her, but it’s a ploy. She’s not really hurt, nor does she need help. “I’m doing this for our kids’ view of you,” she says. Eyeroll.

The moment itself could have been sweet or cathartic with any subtlety, but here it’s cloying. Again, why should we care if the Stauntons get divorced? People get divorced all the time. What we have, in lieu of the specificity that made Force Majeure so sharp, are underdeveloped characters preaching to typical American morals. The family bends, but never breaks.

Downhill is a mess, but it’s probably true that viewers who haven’t seen Force Majeure will find more to appreciate in it. In many ways it’s a typical mediocre American comedy, and without comparison to its exemplary source material it wouldn’t be such a missed opportunity. Instead of resigning themselves to this inevitable comparison, Faxon and Rash could have created something new altogether. But maybe that’s just not the American way.