The Satanic Temple has been making Satan fun again since its inception in 2012. In her latest feature, Hail Satan?, documentarian Penny Lane playfully captures the ritualistic pageantry, community outreach, and ingenious political activism that has pushed membership in the Satanic Temple to over 100,000 strong. Lane challenges you to leave behind your preconceived notions and reconsider a religion that embraces modern sensibilities and is, arguably, more faithful to the Humanist teachings of Christ than his most strident followers. Entertaining and surprising, Hail Satan? is a wickedly good time.

Early in Hail Satan?, a small contingent from the Satanic Temple (TST) and a smattering of disinterested news reporters gather on the Capital steps in Tallahassee, Florida. It’s 2013 and then Florida Governor Rick Scott is about to enact a bill that will “allow prayers of invocation or benediction at secondary school events.” Hilariously adorned in flowing robes and devil horns, the Satanic Temple praises Scott’s decision, which paves the way for young Satanists to now openly proclaim their allegiance to Lucifer. “Hail Satan!” they cheer. “Hail Rick Scott!!”

It’s tempting to dismiss such media stunts (and the Satanic Temple itself) as a satirical goof. Everything they do is laced with an irreverence more benefitting National Lampoon than an organized religion. Even co-founder and TST spokesperson Lucien Greaves acknowledges that Satan has nothing to do with the atheistic principles upon which their doctrine is based. To the Satanic Temple, Satan is merely a convenient symbol to promote religious plurality; a manifestation of critical thinking and a logical counterpoint to monotheism and authoritarianism. Put simply by Greaves, “Satan is the eternal rebel.” 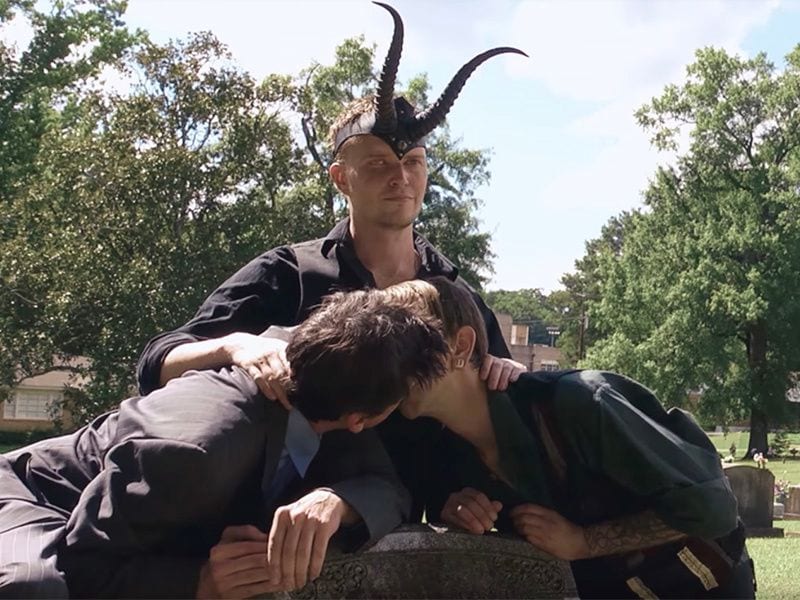 What separates TST from other satirical sects, including the eternally peculiar Church of the SubGenius with its doctrine of ‘Slack’, is that it strives for something beyond the boundaries and limitations of an intellectual construct. The TST wants to stir shit up! Thanks to director Penny Lane’s unfettered access within the TST power structure, we get a front row seat to all of their rabblerousing.

There are no re-enactments in Hail Satan? Instead, Lane relies upon archival news footage and videos by TST members to fill in the gaps. Sometimes it’s hard to believe the audacity of what you’re seeing. When Greaves unveils an 8’5″ bronze sculpture of Baphomet to protest monuments of the Ten Commandments in front of government buildings, the anarchic energy is palpable. As is the danger. Greaves and his cohorts labor under the constant threat of personal injury from rival fundamentalist groups. It’s the type of tension and exhilaration that no staged re-enactment can duplicate.

Not all threats come from the outside. It’s fascinating to watch the organizational growing pains within TST, as well. Founded with a fierce desire to avoid hierarchical constraints, the Satanic Temple must adopt a consolidated power structure to accommodate its growing membership. This capitulation angers more demonstrative members, in particular, the fiery, leather-clad artist known as Jex Blackmore. When her tactics become increasingly aggressive, Blackmore creates a schism within TST that can no longer be ignored. How does an organization steeped in individual expression go about unifying its message and preserving order? It will be interesting to see if TST can resolve this paradox as it continues to grow. 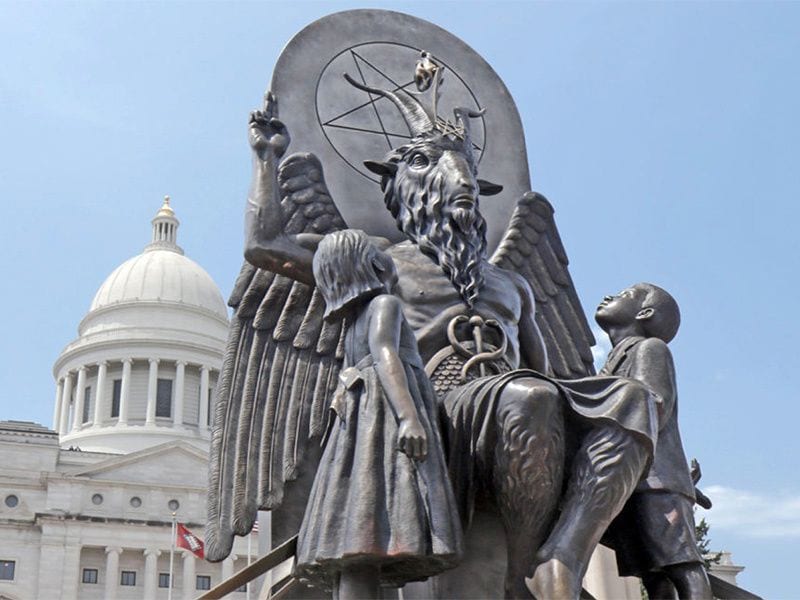 It would be easy for Lane, who broke through at Sundance 2016 with her rollicking animated documentary Nuts!, to focus on the more sensational elements of her story. Naked writhing bodies drenched in milk and wine at a Satanic Temple ritual is pretty cinematic, after all, but Lane is determined to find the human core in Hail Satan? There’s just as much attention paid to the unassuming community outreach work of the idealistic Satanists as to their outrageous political stunts. For every ‘Black Mass’ in Boston to protest the Catholic Church there’s an effort in Florida to collect socks for the homeless or a blood drive in Seattle. Indeed, a quick scan of The Seven Tenets of the Satanic Temple reveals a religion dedicated to compassion, reason, and many of the same principles championed by Christianity.

Time and time again, Lane points to deeds rather than words to illuminate her subjects. It matters little that no Christian representatives, Congressional crusaders, or general citizens agrees to break bread with Lane. Their seething, frothing-at-the-mouth behavior, usually in televised public forums, clearly demonstrates the lack of Christ-like empathy in their heart. It’s hard to tell what’s more disturbing; an enraged pundit on national television openly lusting for the shotgun murder of TST members or the slack-jawed moderator nodding in agreement.

Where Lane struggles is framing the historical context of this palpable religious intolerance. There’s some scholarly conjecture that America’s struggle to maintain the separation between Church and State started with the Communist threat of the ’50s, when the government seized upon our paranoia to obscure America’s secular foundation beneath a veil of Christianity. The Salem Witch Trials of 1692 and the Satanic Panic of the 1980s and ’90s (fueled by Tipper Gore’s PMRC watchdogs) are also namechecked, but fail to add much context. Perhaps such rigorous examination is beyond the lighthearted scope of Hail Satan?, but a little more historical background would emphasize the long odds facing the Satanic Temple and its membership.

Still, these are relatively minor quibbles with an otherwise delightful documentary. One might argue that Lane crosses the line of objectivity and enshrines her Satanic subjects as the new standard of social conduct. It’s hard to blame her, though, after spending 90 minutes with this band of affable, idealistic hell raisers. Hail Satan? indeed.