Midsommar is the kind of movie you excitedly drag your friends to see only to have them revoke your movie-choosing privileges forever. Whereas director Ari Aster‘s disturbing 2018 debut Hereditary resolved its foreboding family drama in familiar supernatural territory, Midsommar is one long mind-screw.

Four hapless young Americans travel to a remote village in Sweden where they are tormented by the ever-present (midnight) sun, creepy pagan rituals, and enough bad psychedelic trips to send
Cheech & Chong into rehab. Aster’s uncompromising artistic vision and meticulous attention to detail create a singular viewing experience of horror, humor, tedium, exhilaration, and confusion. In a word, it’s brilliant.

Of all humanity’s many curiosities and paradoxes, the concept of love is perhaps the most perverse. Investing someone with all of your hopes, dreams, and insecurities is like giving them the key to your soul and trusting them to drive safely. The only thing more reckless than abusing this power is nonchalantly misplacing the key. It’s clear from
Midsommar that Ari Aster takes great pleasure in dissecting the horrific side of love. 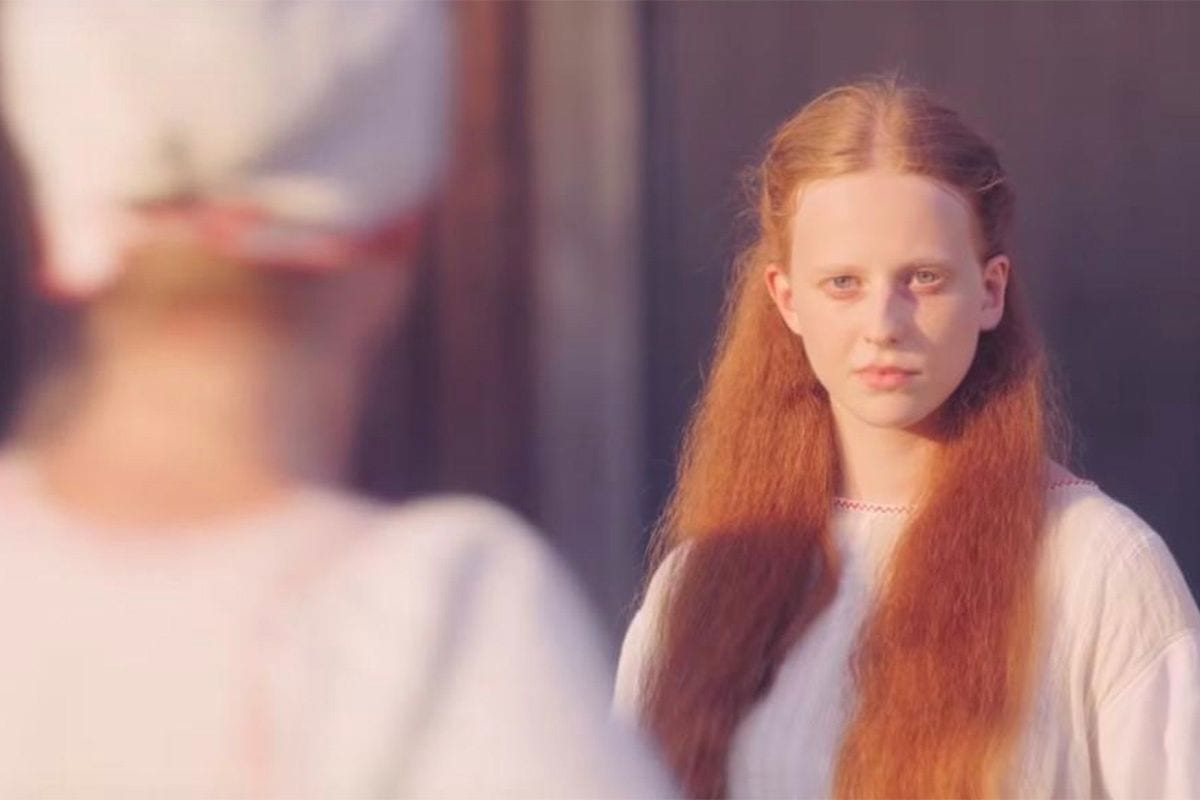 For Dani (Florence Pugh) and Christian (Jack Reynor), four years of dating has become a slow drift into co-dependence. Christian isn’t really a bad guy, he’s just a 20-something man-baby who’s still unwilling to shoulder adult responsibilities. He wants to break up with Dani, but is content to let her twist in relationship purgatory rather than face the drama. Meanwhile, the psychologically fragile Dani clings to Christian, even as she feels the life-preserver deflating. It’s the kind of queasy co-dependence that prolongs doomed relationships and leaves behind a twisted emotional shell that can never fully recover.

After Dani is rocked by a personal tragedy (rendered with breathtaking and wordless efficiency in the film’s opening moments), Christian feels duty bound to invite her along on a trip to Sweden with him and his three buddies. There’s not much attention paid to Christian’s three amigos. We have Josh (William Jackson Harper), who wisely chose a Ph.D. dissertation that requires research in Europe, Mark (Will Poulter), who is the ugly American that makes enemies just by opening his mouth (or peeing on sacred artifacts), and the slightly more compelling Pelle (Vilhelm Blomgren), the Swedish friend who really wants to take them to his remote home village of Hälsingland.

The most compelling character in Midsommar is Hälsingland itself. Using geometrically striking temples and hordes of cavorting villagers dressed in traditional homemade garb, Aster makes this welcoming, wide open space feel suffocating and claustrophobic. The comparisons to pagan-themed films like Robin Hardy’s The Wicker Man (1973) are unavoidable; a pre-existing knowledge that Aster uses to build an almost intolerable anticipation for a fiery conclusion. Basically, Halsingland looks like a visual interpretation of Led Zeppelin’s “Stairway to Heaven“, complete with pipers and May queens. 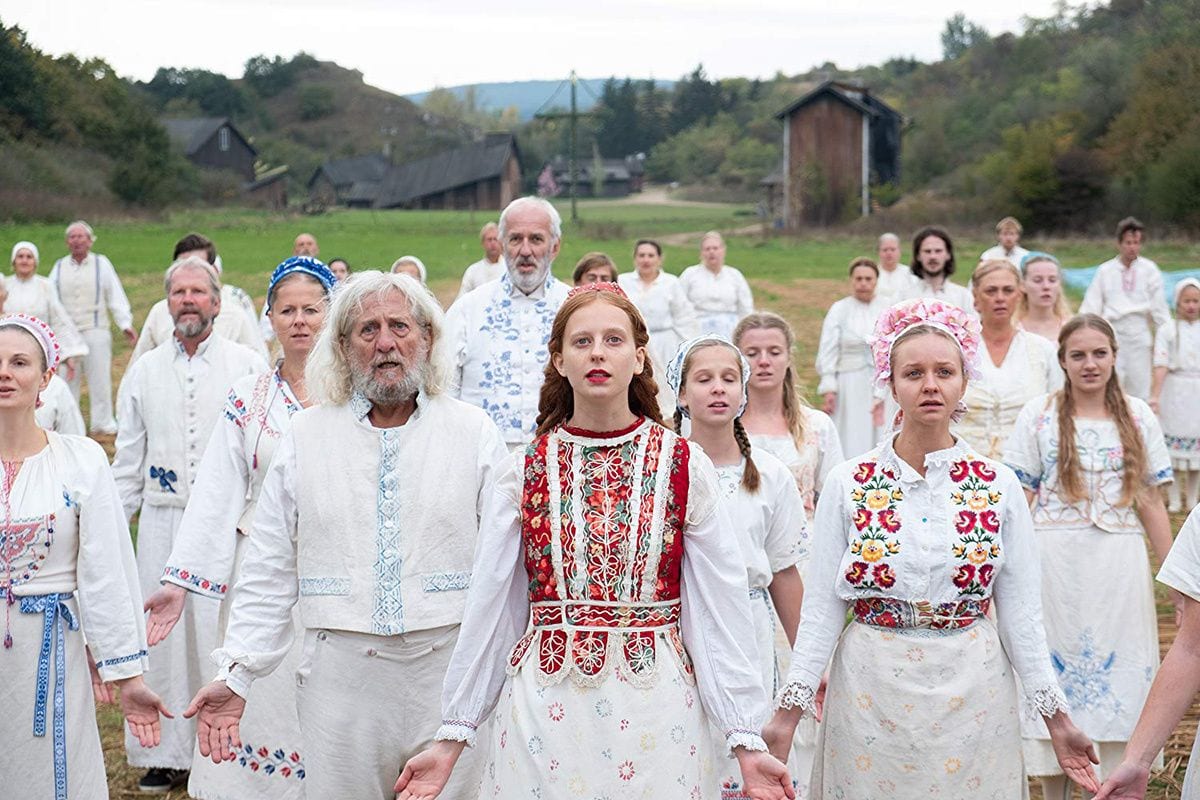 It’s unsurprising to learn that Aster was already researching Midsommar years before he filmed Hereditary. Cinephiles love to shower filmmakers with comparisons to the meticulous auteur Stanley Kubrick; the epic-scale detachment of a Christopher Nolan or the wide-angle mastery of Yorgos Lanthimos, for example. What truly distinguishes Kubrick from other filmmakers is the sheer density of his films. The minutiae of his cinematic canvas, exhaustively researched for years before the cameras even start rolling, creates an overwhelming immersion in every story, no matter how exotic or esoteric. From costumes to set design to the precise detail of every ritualistic dance and ceremony, Midsommar is laden with a Kubrickian dose of place and purpose. You may grow tired of the cavorting and pageantry, but you will never forget it.

And always there is the sun…

The midnight sun of Sweden is a constant companion and tormentor; almost acting as a giant spotlight to keep Dani and Christian from escaping. But even if they could escape, where would they go? They are lost, not only in a foreign wilderness, but in their own insecurities. As the hallucinations and paranoia intensify, each regresses toward the most fundamental manifestation of their insecurity; madness and infantilism. By the time they reach the end of the journey, their fates seem more inevitable than shocking.

But don’t worry, there is plenty to shock you in Midsommar. What it lacks in dark shadows and jump scares it more than compensates for with absurdist horror and dread. This is a twisted, surrealistic fairy tale complete with regal carriages and the most psychedelic dance around the maypole ever. Its scares lie deeply embedded in your psyche; the growing awareness that you are helpless to stop the emotional frailty that authors your undoing. 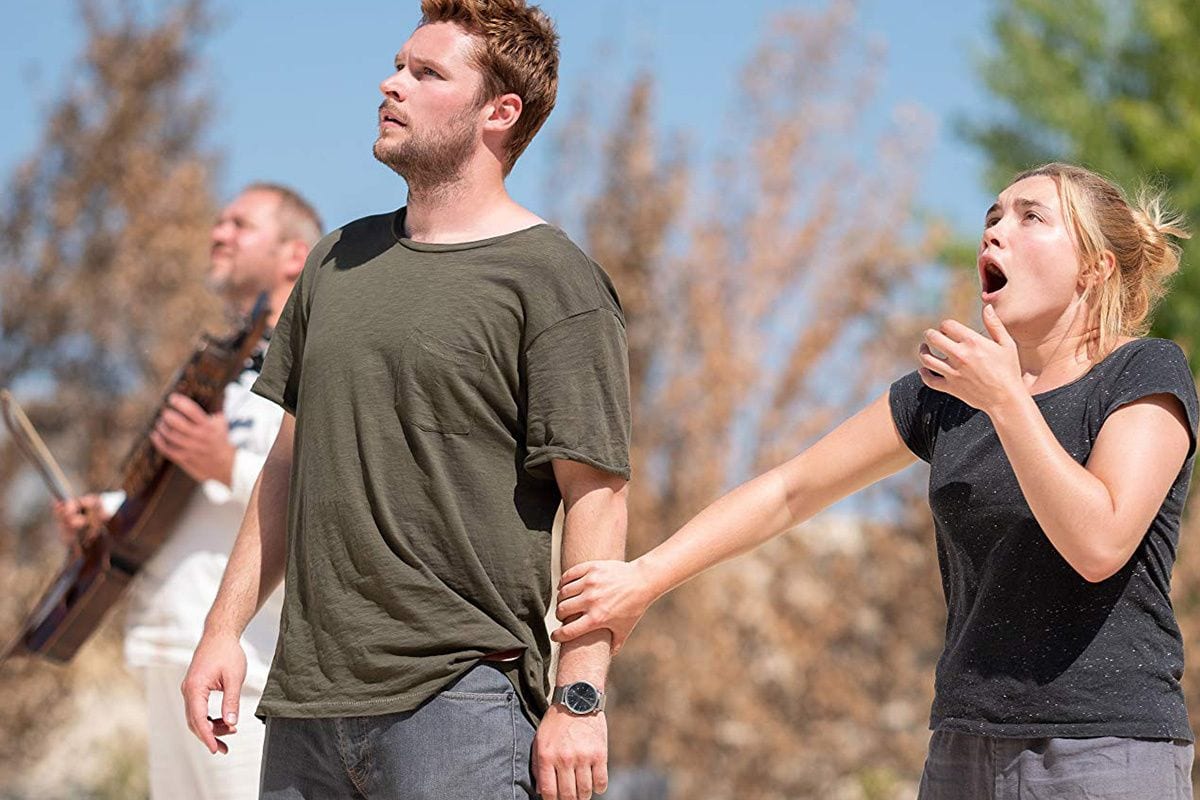 Indeed, it’s this chilling recognition of inescapable fate that shapes both of Aster’s films. In Hereditary, it was the specter of mental illness looming over each character’s shoulder, while Midsommar uses our inexorable yearning for love and connectedness to chart our doom. This passivity can be difficult to stomach for audiences more accustom to headstrong heroes. In particular, Aster’s male leads are thoroughly incapable of comprehending the spiritual terror plaguing their female partners. Aster wallows in the tragic elements of horror, illustrating the ludicrous struggle for free will when the psychological dice were thrown long ago.

It should be obvious that Midsommar is not intended for causal viewing. It’s a challenging exercise in patience and self-examination, eager to push your limits with absurdist delights and existential horrors. You might argue that Midsommar needs a little less of the pagan and a little more of the personal during its nearly 2.5 hour running time. It’s precisely this emersion into a foreign realm, however, that slowly strips away our prejudices surrounding love and individuality. The lines between connectedness, co-dependence, and cult are terrifyingly imperceptible once ensnared within their boundaries. While its artistic and thematic audacity are undeniable, Midsommar is sure to be one of 2019’s most divisive films.