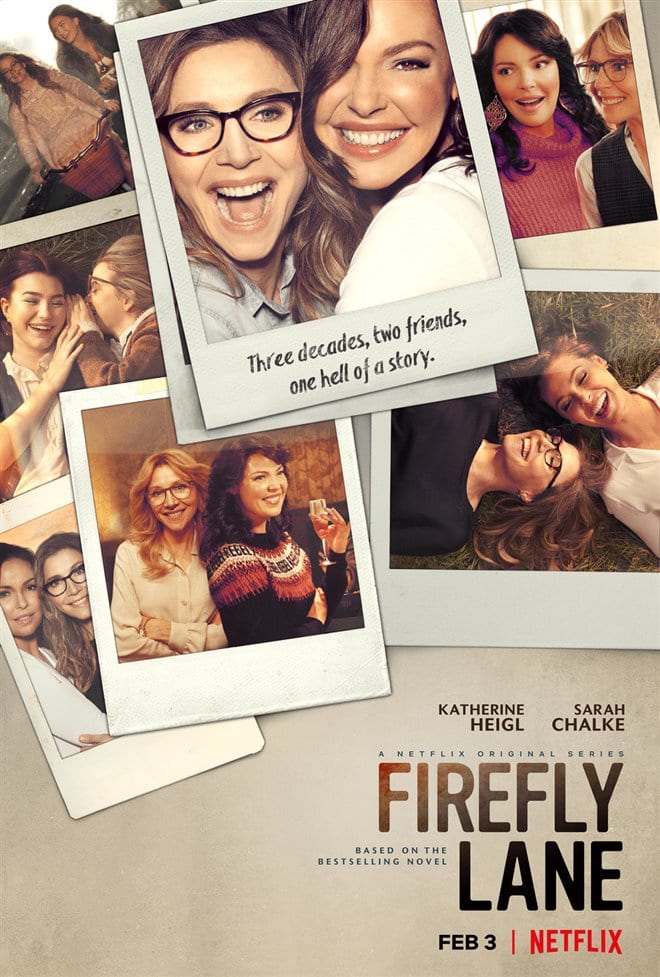 Firefly Lane, a Netflix original series released this month, is an adaptation of the novel of the same name by Kristin Hannah. It tells the story of Kate Mularkey and Tully Hart, who have been best friends since their early teens in the 1970s and are now old enough to have a teenage daughter and an Oprah-like daytime television career, respectively. (“Now” in this show is actually 2003.) For those of you who have not watched the show and want to go in unscathed, this is your warning: The rest of this article contains spoilers for the entire first season and specifically the very last scene.

Firefly Lane has four principal timelines: The ’70s, when the girls are in their early teens; the ’80s, when they are in their 20s and working at a local news station; 2003, which is presented as “now;” and 2005, presented as “two years later.” It’s the 2005 timeline that has wronged viewers.

When we are first shown the 2005 timeline, we are given the impression that Tully has died, and Kate and her daughter, Marah, are on the way to her funeral. Little by little, this assumption is disproven. First, we see Tully leaving her car to walk up to the church where the funeral will be held. She and Kate have a tense, wordless standoff, and the scene ends. We still don’t know who has died.

In the last few episodes, we discover the funeral is for Bud, Kate’s father. As Kate walks into the church for the funeral, she is stopped by Tully. Kate tells Tully she isn’t welcome at the funeral or in her life; Tully begs for forgiveness for something we haven’t been shown.

And then it ends. Season one: over.

This is a sin. Playwright and venerated short story author Anton Chekhov is also the father of a rule of writing called Chekhov’s Gun. It is as follows: “One must never place a loaded rifle on the stage if it isn’t going to go off. It’s wrong to make promises you don’t mean to keep.” Firefly Lane put the gun on the stage. Creator Maggie Friedman had the characters pick it up and play with it. But they never fired the weapon.

The storyteller’s job is to keep you in that car. Even if you grow uneasy racing over train tracks with no regard for the flashing lights. As the audience, you may leave the car at any time. You can leave the theater; you can put down the book and never pick it up again; you can stop watching the show. You stay because you are interested in the ride and because you trust the storyteller to get you to a satisfying destination.

Violating Chekhov’s Gun is not just bad writing. It’s a betrayal of the trust between the storyteller and the audience. It’s a symptom of the dissolution of trust between storytellers and their audiences. Firefly Lane is not alone in treating its audience so cavalierly; it’s almost in fashion by this point.

The two biggest examples are also two of the biggest franchises of the past decade: Marvel Studios and the Game of Thrones television series. The larger and more popular Marvel becomes, the less it trusts its audience. Its productions are so swaddled in secrecy that even the actors are not given the entire scripts to the films they are shooting, and people involved in the production are fired if they give away any secrets (Wilding). Indeed, Marvel’s approach to storytelling has become the equivalent of shoving the audience into the car at gunpoint and driving them to an unknown destination with a bag over their head.

Good storytelling is predicated on developing a picture of a particular slice of the world and sharing it with the viewer. In Marvel’s infancy, the studio did this. We, the audience, woke up gasping in an Afghani cave with Tony Stark as he discovered the shrapnel in his heart and what had been done to keep it from killing him. We became a team with the Avengers. We explored characters and the world they were changing. In Marvel’s later films, the intimacy is gone. The beats of Avengers: Infinity War (2018) and Avengers: Endgame (2019) are built upon gut-punch gotcha moments instead.

In turn, audiences have stopped trusting Marvel. In fandom spaces, you’ll see statements like, “Marvel really hates women, huh?” (Tumblr) and, “I am going to die mad about Endgame.” Many fans describe their ongoing attraction to Marvel as an abusive relationship. “Why do I stay when they just keep hurting me?” And these are fans. These are the audience members who take the story home with them and make their own stories, who make art, who buy merchandise and go to conventions dressed in costumes.

A storyteller shouldn’t let the audience drive the car, and so there is an inherent imbalance of power. But at the same time, the audience can leave the car anytime they want. They are not without agency. They are an active participant in this relationship. Marvel’s strongarm tactics do not honor the audience’s place in the relationship.

Something similar happened with Game of Thrones (2011-2019). The final season, and especially the fate of Daenerys Targaryen (Emilia Clarke), made little sense to fans, and again, they felt betrayed. Throughout the series, Daenerys grew from a young, scared, bartered bride to one of the show’s primary heroes. She is a fierce but compassionate leader, one many fans hoped would take the Iron Throne in the end. But when that end came, something else happened. Daenerys’ compassion gave way to an unforeshadowed madness, and she turned her strength toward hurting innocent people, until finally she was murdered by her lover. She was put down for safety’s sake like a rabid dog.

Game of Thrones fans stayed in the car for eight long years, only to find their destination lackluster, disappointing, and senseless. Fans screamed “Justice for Daenerys!” (Saad) and 1.8 million people signed a Change.org petition to “Remake Game of Thrones Season 8 with competent writers.” Statements like this one dominated social media:

“Wanting a girl who walked through fire and came out unscathed with 3 dragons, united all the khalasars into one, and overthrew the system of slavery to be humbled b/c you can’t handle seeing a bad bitch. Its [sic] not Dany’s fault that y’all are average, take that up with God.” (Tumblr)

Since then, Game of Thrones has mostly faded from public consciousness. It’s odd that a show that was in the forefront of western entertainment for almost a decade has all but disappeared from spaces both fandom and non. I haven’t seen any excited posts for HBO’s spinoff, House of the Dragon, and I almost never see Game of Thrones content on Tumblr or any other social media melting pot without mentioning the failure of the last season. It could just be my generation, but it seems that the giant betrayal from the storytellers has left Game of Thrones no legacy — only bitter regret.

And now, back to Firefly Lane. (Thank you for staying in the car with me. I appreciate you.) My advice to Netflix, and to Firefly Lane‘s showrunners, is: Be careful with your audience’s trust. It’s a rare, precious thing, and fragile. And once lost, it’s almost impossible to win back.