What was the first record you ever bought? We were brought up in a marketplace that simultaneously fixes and takes us out of our environment. We can make choices, be adventurous, but we are still prey to what is placed on the counter in front of us.

As a white American teenager, I developed a predilection for African-American music, most surely of the contemporary sort. That may or may not have had something to do with growing up in a liberal environment, one influenced by the civil rights movement. There were no strictures on the records I chose to buy. My parents hardly paid attention, unless I played the record too loud.

My older brother and sister would occasionally tune the car radio into WILD, Boston’s black-owned and operated AM radio station, which suffered from the usual AM radio languor – too much talk, too much advertising, not enough music. Motown, which was overtly marketed to white as well as black American teenagers, was quite prevalent, on the radio and in the average household, so much so that it wouldn’t have been my first choice when I decided what would be my first choice (in the record-buying marketplace).

The direction I was taking, what would eventually constitute the bulk of my record collection, regardless of cultural or political inclinations, was still dependent on what the market provided. And while there was a certain amount of pretension in tuning into WILD, the innocent mind can bear witness to three songs situated in a specific moment within our family car, songs that came over the tiny AM radio speaker.

“Satisfaction” by the Rolling Stones, “Papa’s Got a Brand New Bag” by James Brown, and “Chain of Fools” by Aretha Franklin. Smash hits, songs that were hard, if not impossible to avoid, but songs my memory gives preference to, or highlights, over the inundation of one-hit wonders or middle-of-the-road pop.

Two of the songs are by black artists, but it can also be noted that the Rolling Stones were one of the few, if not the only, white bands played on WILD. 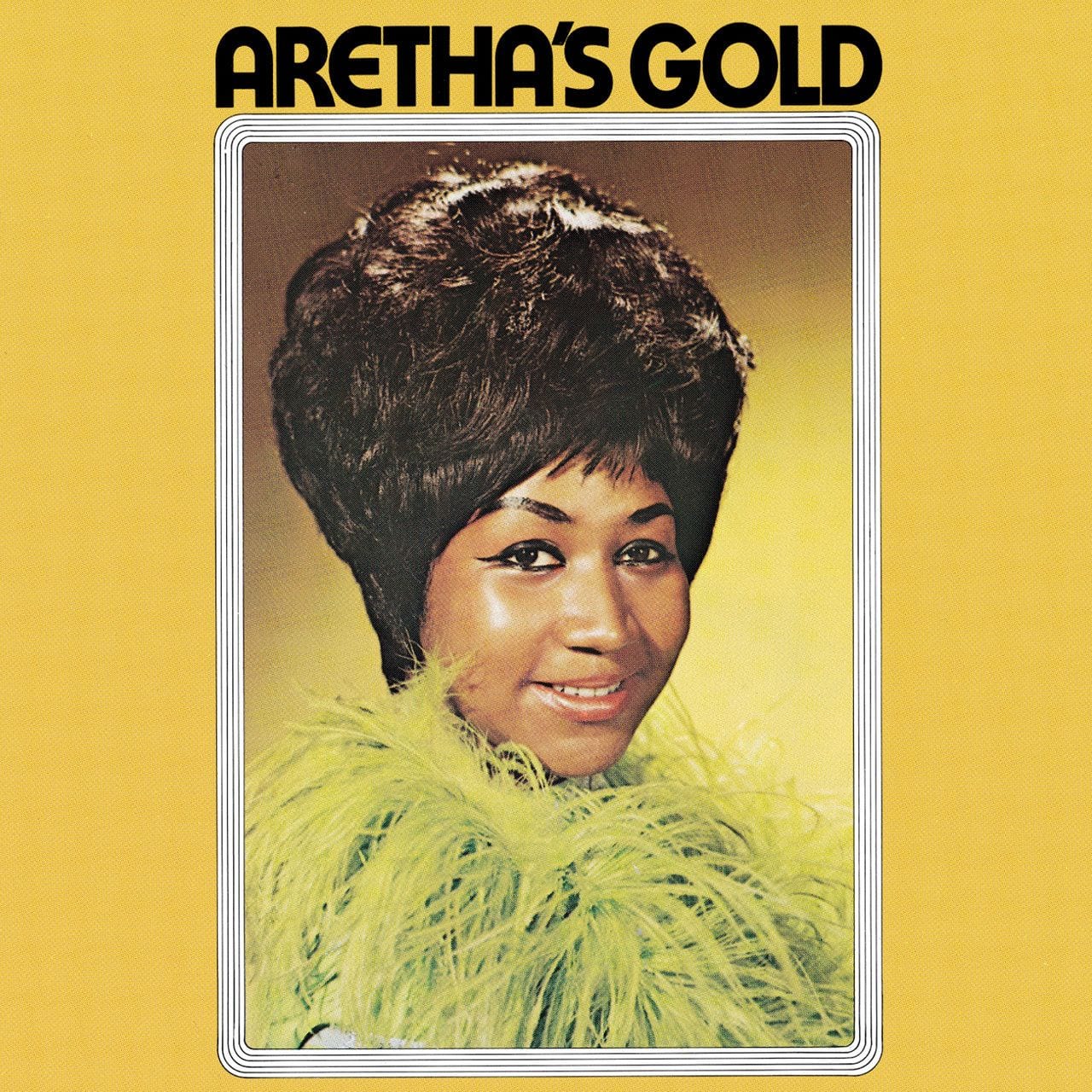 Aretha’s Gold (which includes “Chain of Fools”) might be the first album I bought on my own. I had been given a Beatles album and a Buffalo Springfield album for various pre-teen birthdays, but the Aretha album was my own conscious choice, a self-directed adult decision. I can’t picture where I bought it (most likely at the Harvard Co-op in Harvard Square) or how I earned the money to pay for it, but I can picture the worn cover many years after it had been bought, splitting at its seams from overuse.

The cover made for effective if simple marketing, conspicuous when fresh but prey to eventual wear and tear. Gold is supposed to be a valuable substance, and the cover is mostly gold, a surface hue that surrounds a stunning, campy photo of Aretha, an image that had us gasping while remaining respectful of the music. Aretha is in full bouffant, almost ala Tammy Wynette, with a feather boa wrapped around her neck. Her skin is polished, unnaturally reflective in tandem with the cover’s faux-gold ambitions. This was another world, an African-American aesthetic that we might witness but which we would never come close to living.

The songs themselves are gold, pure gold; an album that could hold up as well as any “concept album”. The kind of gold easily accessed by anyone with a tiny AM radio (at the time of release), while the privileged could listen to the entire album, in whole or in pieces; the poor being, in this case, those who have never considered Aretha’s Gold within the holistic fabric of American history.

Soul music was a term, a category, wafting around the African-American musicians who incorporated the gospel feel into the pop music strain, who put some soul into the secular. Ray Charles may have been the first to be explicitly cited (and criticized) for the trend, but there is a slew of stand out soul artists that include people like Jackie Wilson and Al Green. Somehow, Aretha, in this phase of her career, epitomizes soul music.

It wasn’t always so. Franklin’s first label, Columbia, marketed her as a jazz singer or chanteuse, not without interesting, albeit low-selling, results. It was the more R&B inclined Atlantic label (who took over her contract) who noted the soulful hit-bound potential in Aretha’s style. Combining her talents with the Muscle Shoals studio band was the ultimate leverage in pushing the sound in the direction of soul. But really, all Atlantic had to do was tell Aretha to sit down at the piano and sing something bluesy, and out came the first hit song: “I Never Loved a Man (The Way I Love You)”.

The concept album that is Aretha’s Gold follows the chronology of her hits, all released in 1967 and 1968, apex years of the decade not just in terms of numbers but also as an apogee of its cultural and political zeitgeist. Soul had reached one of its most refined points, an excellent counterweight to the innovations of what we now called rock, what could also be referred as the white wing of soul if we consider musicians like Janis Joplin or Van Morrison.

If we follow the sales charts, each song on Aretha’s Gold lives up to its comparative precious metal, songs that frequently hit number one on the R&B charts and crossed over to pop’s top ten. Curiously, but in another sense unsurprisingly, “Respect” is the one song that made number one in both markets, which indicates Franklin’s talent as an interpreter as well as a songwriter. Here is where the “concept album” comes into play, as the album includes the aforementioned hardcore soul material of (for example) Otis Redding (“Respect”), individualized to the point of practically surpassing Redding’s version (certainly in terms of sales), along with the smoothness that is Sam Cooke (“You Send Me”), a Goffin, King, Wexler Brill Building contribution (“Natural Woman”), and a Burt Bacharach selection (“I Say a Little Prayer”) which was the second Franklin B side that charted as well as the A (let alone that is was a previous high charting success by way of Dionne Warwick).

All that makes for effective, if ultimately random, segues, covering the funky as well as the orchestral, the smooth as well as the rugged. While Aretha’s Gold is generally labeled as soul, there is an abundance of genre mixing. Simply by way of its interpretations, the record can be implicated as jazz. In this respect, her album Aretha Now, which contained the song “You Send Me”, placed number nine on the jazz charts.

All that should lead us to consider the implicit racial makeup of American society, which even delineates the ethnic origins of music within its marketplace. The market may have moved beyond the more egregious designation of “race records”, but at times I stood out as a white person who preferred black music. There was nothing heroic in this; it was simply the sound that appealed to my ears; I followed those tangents like anyone else with a specific interest.

But those categories, genres, and designations are presumptuous and lead to rote simplifications about what might appeal to any given type. Musicians listen to, or consider, everything; not by duty but through creative curiosity. And thus we comprehend why Charlie Parker listened to country music, or James Brown expressed admiration for Burt Bacharach, or why Serge Gainsbourg expressed admiration for James Brown, or how the new wave of British heavy metal band, Tank, covered “Chain of Fools”, or why, indeed, Aretha Franklin covered “Satisfaction” by the Rolling Stones.