It can be difficult to fathom the fact that the Flaming Lips have been together in some form or another for 35 years. And while the consistent thread throughout the band’s discography has been a unique strain of “weirdness”, it’s also breathtaking to take in their evolution over the course of 14 studio albums and various projects and collaborations.

But before the band of oddballs from Norman, Oklahoma became the de facto indie experimental freaks the world knows and loves, there was an early, rawer, more direct sound to their music. That’s where Seeing the Unseeable: The Complete Studio Recordings of the Flaming Lips, 1986-1990 comes in. A collection of their first four full-length studio albums in addition to two discs of rarities from that period, Seeing the Unseeable is the Flaming Lips in all their nascent, punk rock, salad-day glory. Before the freak pop hit that landed them on Beverly Hills, 90210, before singer/guitarist Wayne Coyne’s rumpled white suit, before the boom-box experimentalism of Zaireeka, before the head-scratching Miley Cyrus collaborations, the Lips were signed to Restless Records and recorded a string of rough, strange, aggressive music at the tail end of the 1980s.

Released in 1986 – two years after their self-titled debut EP and following the departure of Wayne’s brother Mark – Hear It Is shows relatively little of the sound that the Flaming Lips would pursue on later albums. At this point, the band consists of Coyne, bassist Michael Ivins, and drummer Richard English. Opening track “With You” alternates between the acoustic folk of the verses and the pummeling electric crush of the choruses. Elsewhere, the band seems to adopt a sound that is freakishly close to that of the Replacements, largely because Coyne’s vocals were a dead ringer for Paul Westerberg.

The ‘Mats comparison carries over to the music as well, to some degree. While rough-hewn guitars and a bash-it-out, DIY aesthetic hovers over all ten tracks on Hear It Is, there are glimpses of greater ambition. “Jesus Shootin’ Heroin” doesn’t just kick off the band’s penchant for knocking over the sacred cows of Christianity; musically, it owes more to Black Sabbath than Bob Stinson with its doom-metal guitar chords and almost Gothic tone. Additionally, “Godzilla Flick” combines a whimsical pop culture touchstone with breezy acoustic guitar and an almost anthemic sense of musical richness. Hear It Is has plenty of punk elements, but the Lips were already looking further over the horizon.

The pieces continue falling into place on the follow-up, 1987’s Oh My Gawd!!! Sure, the hyperactive “Everything’s Exploding” follows the standard guitar-heavy college rock playbook, but the psychedelics soon kick in with “One Million Billionth of a Millisecond on a Sunday Morning”, arguably their first “epic” track, where rambling electric guitar-led balladry collapses into slashing rock riffage, sounding like an early Pink Floyd jam session. There’s also the impossible-to-grasp utter insanity of songs like “Maximum Dream for Evil Knievel”, where Coyne’s acid trips seem to take on a life of their own as stop-start guitar figures suggest a penchant for progressive rock. Oh My Gawd, indeed. 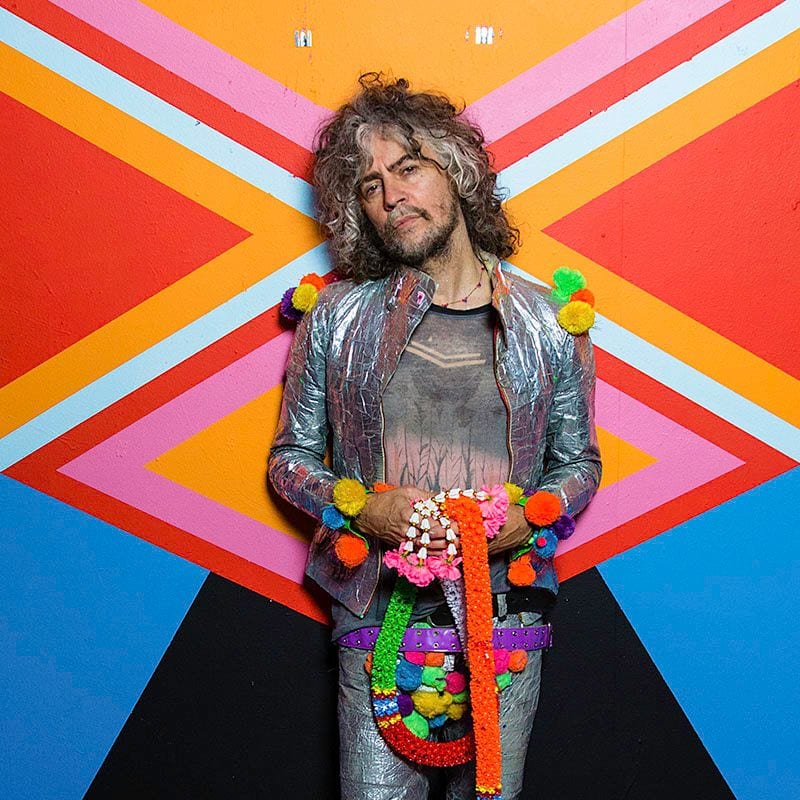 As Seeing the Unseeable progresses, the Flaming Lips begin inching closer and closer to the sound they were to perfect in the late 1990s and early 2000s, and Telepathic Surgery seems to bear this out to a fairly excessive degree. Initially conceived as a 30-minute sound collage, a “standard” (relatively speaking, of course) album was eventually created, with a somewhat rough concept at play, spread across 14 tracks. These tracks include everything from tiny snippets like “Michael, Time to Wake Up” (an atonal electric guitar freakout) and “The Spontaneous Combustion of John” (a brief blip of dark folk) to the epic, 23-minute experimentalism of “Hell’s Angels Cracker Factory”, which includes twin-attack distorted guitar riffs, odd , Zappa-esque horn outbursts, manic, thundering drum fills and bits of operatic vocalizing. “Chrome Plated Suicide” is one of Telepathic Surgery‘s high points and also an important step in the band’s evolution as the cracked power ballad – melodically cribbed from “Sweet Child o’Mine” – introduces Coyne’s now-famous strained, Neil-Young-on-acid vocal style.

In a Priest Driven Ambulance, released in 1990, is the final album the Flaming Lips made for Restless Records, and it also marks the first major line-up shifts since Mark Coyne’s departure. Drummer English is out, replaced by Nathan Roberts, and guitarist Jonathan Donahue – who would also helm indie darlings Mercury Rev – gives the band additional texture. At this point, Coyne is totally committed to that out-of-tune nasal holler, and on “Shine on Sweet Jesus”, the band uses standard power pop chord structures as a foundation for a noisy, distorted sonic mess. It’s as if they realize that nobody cares how unhinged they sound, so they go for it. But there’s nothing really “forbidden” about the sound. It’s a celebration, and everyone’s invited. Donahue’s presence underscores the heavier sounds of “Unconsciously Screamin'” and the spacey guitar fills of “Five Stop Mother Superior Rain”. For good measure, they even close the album with a typically trippy take on “(What a) Wonderful World”.

Seeing the Unseeable is rounded out by two additional discs of recordings from the same era. Restless Rarities includes an interesting collection of covers: an occasionally tender, occasionally head-banging take on Neil Young’s “After the Gold Rush”, a live version of Sonic Youth’s “Death Valley ’69”, and a medley of the Sonics’ garage band nugget and Nick Lowe’s “Peace, Love and Understanding”. The choice of covers ranges from bold to somewhat predictable, but the gusto with which the Flaming Lips attack these songs is remarkably consistent. Alternate versions of “Stand in Line” and “Five Stop Mother Superior Rain” and a Sub-Pop 7″ version of “Drug Machine in Heaven” are some other highlights of Restless Rarities.

The sixth disc in the collection isn’t really an unearthed treasure unknown to hardcore Lips enthusiasts – in fact, The Mushroom Tapes was first released in 2002 as the second disc of the deluxe reissue of In a Priest Driven Ambulance (then titled The Day They Shot a Hole in the Jesus Egg), essentially a collection of Priest-era demos. It’s a treat to hear some of these songs in their early stages, and additional songs that didn’t make the final cut are also included, like the brief, self-explanatory “Jam” and “God’s a Wheeler Dealer”, a truly bizarre number in which noise effects and guitar feedback compete for attention with Coyne’s vocals.

Soon after the release of In a Priest Driven Ambulance, the Flaming Lips caught the attention of Warner Brothers, who signed them and released their major-label debut, Hit to Death in the Future Head. Then came Transmissions from the Satellite Heart, which included the ubiquitous freak hit “She Don’t Use Jelly”. Once multi-instrumentalist and resident musical wizard Steven Drozd joined the lineup, it was only a matter of time before they cranked out albums like Zaireeka (a four-disc set meant to be played simultaneously on four CD players) and the Pet-Sounds-on-harder-drugs masterpiece The Soft Bulletin, gaining fame and notoriety by simply making strange music completely on their own terms. Seeing the Unseeable is an expansive look into the early days of the Flaming Lips, when they left it all on the field, and it all paid off.